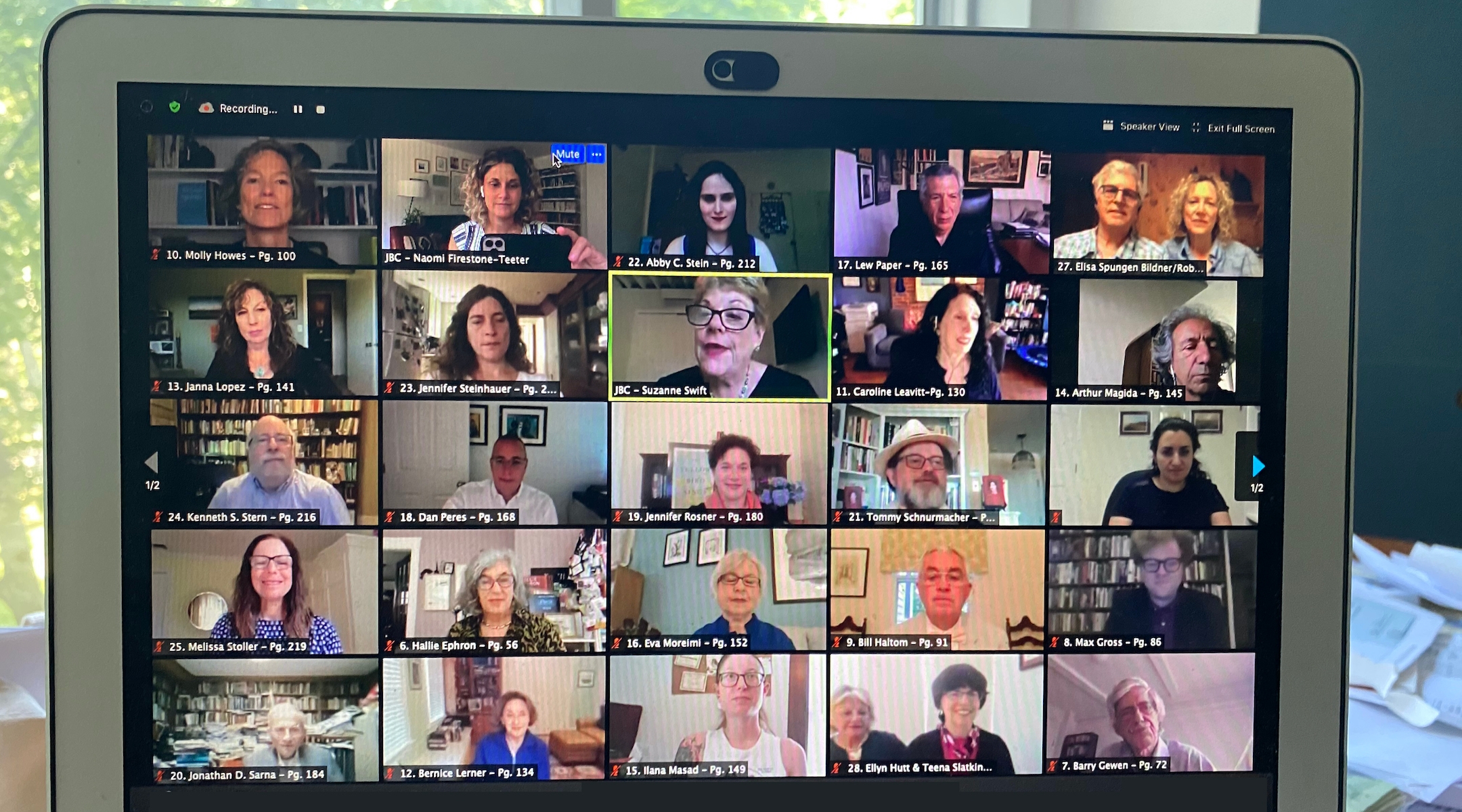 (JTA) — In a normal year, the Jewish Book Council’s annual conference is something of a variety show where hundreds of authors take to the podium with two minutes each to convey what makes their book special.

Things looked very different this year as the event, like so many others, went virtual because of the coronavirus pandemic. For the first time in the conference’s 22-year history, authors couldn’t see the audience’s reactions and attendees couldn’t schmooze with each other over coffee. Instead, participants watched from their living rooms as authors gave their pitches over Zoom during sessions spread over three days this week.

“Being able to be among a crowd of book lovers, or people excited about a particular subject, at our conference — the energy that you just feel when we’re all together you can’t fully replicate that experience as much as we try,” Firestone-Teeter said.

Some 240 people tuned in to the program, an increase from the number of attendees last year. Nearly 250 authors — both Jewish writers and non-Jewish authors whose books address Jewish themes — participated in eight sessions of author talks, slightly fewer than in 2019 but in line with previous years.

One silver lining — at least for the attendees — was getting a peek into their favorite authors’ lives.

Novelist Caroline Leavitt spoke about her book “With Or Without You,” about a longtime couple running into relationship problems, from a living room with a small trampoline on the floor and a blue miniature guitar and several large pieces of artwork hanging on a brick-lined wall.

Journalist Caroline Cenziper spoke about “Citizen 865,” a narrative history of a team of Nazi hunters searching for Nazis who fled to the United States, from a sparsely decorated room with a black and white striped couch and a single frame with a photo on a white dresser.

And Author Hallie Ephron had several large posters featuring her own book covers — including her latest, “Careful What You Wish For,” a thriller about a woman who works as a professional home declutterer — among a handful of other photographs and drawings hanging on her wall.

Another upside, for the council, was that the event didn’t require getting on a plane to participate.

“It makes it more accessible to communities and people who maybe wouldn’t have been able to travel to New York City in May, weren’t able to commit the time, the financial resources and otherwise,” Firestone-Teeter said. “So in a way I think by moving to the virtual arena, the program is a more accessible program for more people.”

The big question is what happens next. Usually, the book council helps facilitate around 1,300 events every year as a result of the conference. Synagogues and other local organizations pay travel expenses and put writers up in their communities for the talks. And while the authors aren’t paid, they get the opportunity to sell books in person to audiences that have spent time with them — and may feel pressure to show their appreciation by buying a copy.

Now, those talks will be scheduled virtually, and it remains to be seen how many will happen.

The book council is working to come up with creative ways to host virtual events, including possibly having authors sign labels that can be put inside book covers and allowing attendees to have short personal conversations with authors in breakout rooms. It might also facilitate joint events for several institutions for popular authors.

“The virtual event space is allowing our communities to take risks,” Firestone-Teeter said. “It’s allowing them to actually create many more programs, perhaps than they maybe would’ve in a physical space. Obviously the costs are different.”

Indeed, that is happening at the JCC of Greater Albuquerque, which typically invites between six and eight authors to speak at its annual book festival in the fall and an additional one or two throughout the year. This year, since it won’t have to cover travel expenses, the JCC is thinking about inviting the same number of authors for the book fest, which it is doing virtually, as well as one author a month after.

The JCC is also interested in partnering with other Jewish organizations to host joint events, though that won’t replace hosting events just for the local community. Local-only events are “community-building” and “more intimate” even when virtual, said Phyllis Wolf, the Albuquerque JCC’s director of arts and education.

The conference also hosted a panel on how to plan literary events in the time of coronavirus, which included a breakout group on how to plan socially distanced events.

Iris Krasnow isn’t worried about selling books. Prior to the book council conference, she spoke at a virtual event with 1,100 attendees and managed to sell 400 copies of her new memoir, “Camp Girls: Fireside Lessons on Friendship, Courage, and Loyalty.”

“I’m really optimistic about it,” she said of the prospect of virtual events stemming from this year’s conference.

Mary Morris, who spoke about her memoir “All the Way to the Tiger,” said she wasn’t worried about personally losing out on bookings since she had made many connections during her three previous Jewish Book Council events. But she thought that not being able to connect after the two-minute pitches could hurt less established authors who have not developed relationships with the various sites.

“It’s a very energizing event when it’s in person,” Morris said. “And one of the things I found about the in-person part is that a lot of times there will be a site that will come up to me and they will ask me questions and then I can tell they get interested in having me come. And a couple times I felt that those conversations afterwards have actually led to me having postings.”

Having virtual events isn’t the long term goal for the book council.

“For the authors, not being able to necessarily travel and visit some of these communities in person is disappointing and we hope that in the future they will return to that again,” said Firestone-Teeter. “And I think for them getting to really meet their readers in person and sign their books physically and see a book sale and see their book out there in the world, that is something very special.”