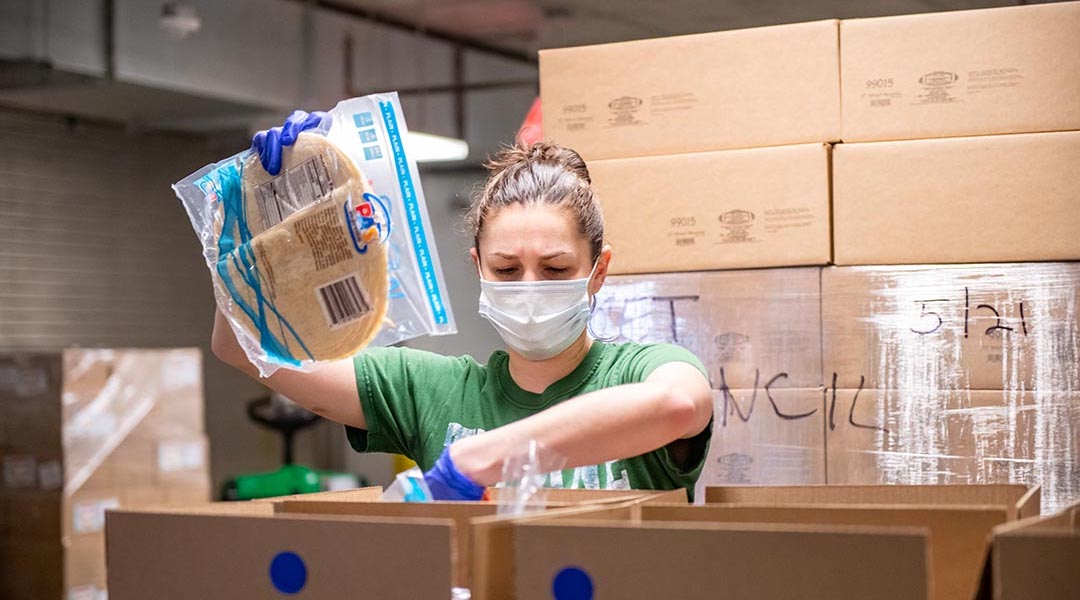 A volunteer packs groceries at the Met Council's warehouse in Brooklyn. Volunteers there assemble more than 1,200 packages of groceries for Holocaust survivors each week. (Courtesy of Met Council)
Advertisement

(JTA) – Since retiring from his post as national director of the Anti-Defamation League in 2015, Abraham Foxman has had plenty of opportunities to take on other projects in the Jewish world. Until now, he’s almost always said no.

But now the 80-year-old is coming out of retirement with an ambitious goal: to raise $28 million to feed Holocaust survivors during the pandemic.

Foxman will lead the national initiative for the Met Council, a social service agency and the largest distributor of kosher food to New Yorkers living in poverty. Since early April, the organization has been delivering groceries to more than 1,200 Holocaust survivors every week through a partnership with Uber.

But with the number of Holocaust survivors in the United States estimated to be around 75,000, that’s not enough. So now the organization is trying to raise enough money to feed 10,000 survivors for a year in New York and across the country.

“They suffered hunger in their youth while under Nazism,” said Foxman, who was born to Polish parents in 1940 and survived the war hidden as a non-Jew. “There are a lot of things we cannot heal or repair, but the one thing we can prevent is for them to be hungry again.”

Millions of Americans have lost jobs because of the pandemic and may be at risk of going hungry. Holocaust survivors could be especially at risk. Nearly two-thirds of survivors were living on less than $23,000 per year in 2018, according to a report from The Blue Card, an organization that provides financial assistance to survivors living in poverty. Isolation and the health risks associated with grocery shopping in person may make them even more vulnerable now.

“They’re particularly at risk, more so than the general elderly population due to higher incidence of cancer, hypertension, diabetes and immune disorders,” said Masha Pearl, executive director of The Blue Card.

More than 40,000 survivors live in the New York area, according to David Greenfield, executive director of the Met Council, with approximately half living in poverty.

“This is a limited-time opportunity to help people who have gone through the worst things imaginable,” he said.

Dozens of volunteers work at the organization’s warehouse in Brooklyn to assemble 8,000 packages each week, over 1,200 of which go to survivors. Hundreds of survivors are still on a waitlist to receive the deliveries as the organization raises money to pay for the food. More than $2 million has been raised so far.

The deliveries, which the Met Council’s social workers confirm with the recipients, keep the survivors from going to grocery stores in person.

For Libora Engelsgteyn, 86, the packages have been a lifeline. She and her sister, Yevgeny, have family that live in New York, but they’re unable to visit frequently. For the two sisters, who were born in Ukraine and survived the Holocaust in Siberia, the packages they receive from the Met Council and the calls they get from their Met Council-assigned social worker are a lifeline.

“We so appreciate og the organization,” Engelsgteyn said. “It’s very helpful, it’s really good and really fresh, we cook everything ourselves.”

To combat isolation among survivors, the Met Council also started a letter-writing program that participants can join from their homes. The participants write letters to survivors and mail them to the Met Council, which then isolates the letters for several days in case of contact with the coronavirus before forwarding them to survivors. Some letters have been translated for Russian speakers.

Foxman said he didn’t anticipate taking on a new project at 80. But with time running out to help survivors, he felt it was too important to pass up.

“This has to be a priority because the lifespan of the people we’re talking about is shortening,” he said. “I think we should have done more, and we’re doing it now.”