CNN election forecaster Harry Enten on his bar mitzvah, the 2020 Jewish vote and why he says ‘Shalom’ on TV 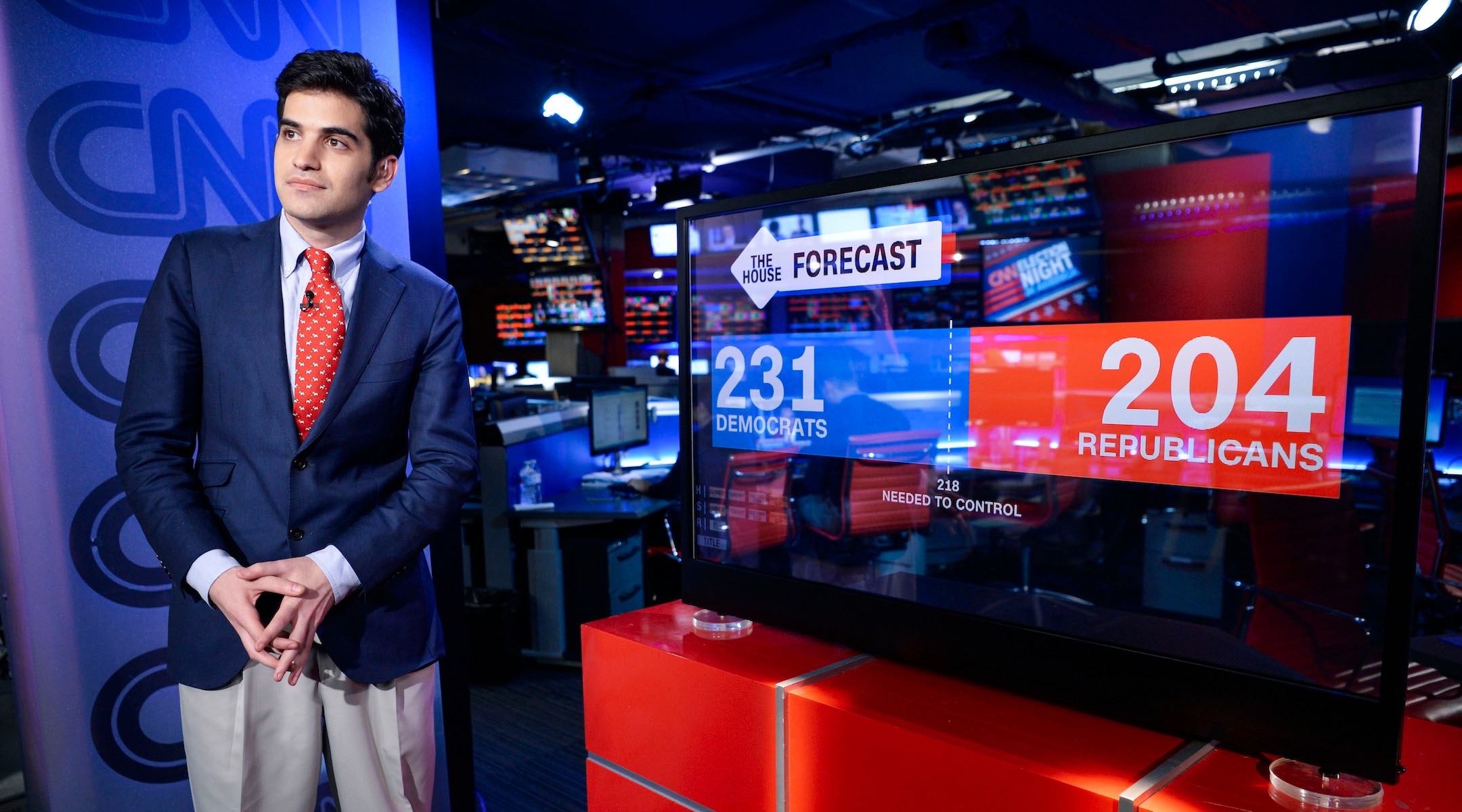 Harry Enten is now a senior writer and analyst for CNN. (Courtesy of CNN)
Advertisement

(JTA) — Harry Enten, the CNN Politics election forecaster, demonstrates his Jewish bonafides just about every time he appears on TV.

A native of the Bronx, Enten speaks with a thick New York accent and regularly drops a “Shalom” during his frequent TV appearances. The trademark signoff feels only natural for Enten, who celebrated his bar mitzvah in Israel and whose late grandmother ran a Catskills resort (where his aunt met her husband, the Jewish singer Neil Sedaka).

“That is who I am,” Enten, 32, told the Jewish Telegraphic Agency.

Enten is also one of the country’s preeminent voices in sorting through election polling data. He worked for FiveThirtyEight, Nate Silver’s data-driven news site, before he moved to CNN in early 2018. Enten’s popular Twitter account, @ForecasterEnten, got him named to the Jewish Telegraphic Agency’s “50 Jews everyone should follow on Twitter” list last year.

JTA spoke with Enten about his career, his family’s history, the Jewish vote and that “shalom” habit.

JTA: Before the pandemic, did your job actually entail going into the office every day, or was it not that kind of job?

Enten: Well, before everything sort of occurred, I’d go into the office most days. Obviously, the TV hits would take place from the office and obviously any podcasts would be recorded at the office. But writing itself could be done from pretty much anywhere. Now, none of that is happening. Everything is basically occurring either from my living room or my bedroom.

I know you grew up Jewish in Riverdale. Talk to me a little bit about your Jewish childhood — what were some of your Jewish touchstones?

We had a kosher home, separate silverware for meat and dairy, kept kosher for Passover obviously. We did go to shul when I was younger, on the High Holidays, and sometimes on Shabbat. I went to Riverdale Temple Camp, when I was very young, and even did nursery there. I went to Riverdale Country School, where I know the population of the student body was largely Jewish, even though the school itself was obviously not. I went to Hebrew school for a little while, then I had a private tutor, and I had a bar mitzvah in Israel. I still know most of my Torah portion, and I could even do it for you right now, I had pretty much memorized — [chants a couple of verses] — I could go on from there.

I saw my father cry very few times in my life, but that bar mitzvah, as we stood on top of Masada, was one of them. And for me, just generally speaking, I want to be very clear of who I am. And I don’t want to lie to folks, I don’t want to be something that I’m not, but I am Jewish, and proud of the fact that I’m Jewish, and I want people to know that.

Every time I see you on TV, you say “Shalom.” Where did that come from, and why did you start doing that?

To be perfectly honest with you, the reason is that I’m just me. That is who I am. I think that there is this idea that some have out there, that you’re going to be buttoned up, and you’re going to have a tie on … for some, that’s exactly who they want to be, and it fits them. (You can view Enten’s TV appearances here.)

To quote a famous Jewish musician, “I gotta be me,” as Sammy Davis Jr. once said. And that is what I have to be. And for me, that means not wearing a tie, and that means saying “shalom,” because that is what I generally do. It really didn’t come from anything except for me being perhaps a little bit more comfortable in being who I am. On the weekends, I wish people “good Shabbos.” It’s just being polite and being me.

What do your bosses think about that? Have they ever asked you, “What’s with the ‘shalom'”?

I have not had a single boss [say anything critical]. I think they’ll say “shalom” back at me. That’ll be the extent of that. They’ve been nothing but supportive in terms of me being me.

I just wrote a piece about “Dirty Dancing,” so I’ve been thinking about the Catskills lately. Your grandparents ran a Catskills resort?

On my mother’s side, my Nana Esther [Goldstein-Strassberg] ran the Esther Manor in the Catskill Mountains, which was a resort that a lot of Jewish people came up to during the summer. She would run that little hotel, every summer, and I think they sold it 50 years ago, if my memory serves me correctly.

My great uncle — my nana’s brother — was the general counsel to the Concord Hotel, which was one of the major resorts up in the Catskills, for a very long time, well after that.

I saw something you wrote, about what you got wrong in 2016, and looking back at that. How has the experience of 2016 affected you as you do your job in the 2020 election?

I think the biggest mistake that any of us made in the 2016 cycle was not in the general election, at least folks who look at the polls daily, but actually in the primary. When Trump entered the race, when he came down that escalator [in June 2015], I think a lot of people, including myself, thought, “This guy is not going to go very far.” His polling is poor. There was no real historical precedent for someone had basically no experience in the modern era  going on and winning a party’s nomination. And indeed, the initial polling for him was, you know, sort of poor. But about a month in, it was very clear that he was connecting with folks, and I think that a lot of us couldn’t believe what was in front of us. We were looking at it like, “there’s no historical precedent for this, he doesn’t have any endorsements.”

If we had merely looked at the polling more closely, and seen this is a guy who has a real shot at winning based upon the polling — which actually in primaries, national polling has actually been pretty good at distinguishing folks who flame out versus those who don’t — I think that we would have been much better off.

So for 2020, one of the things that I was very keen on doing was making sure that I didn’t under-rely on the polling data. And while certainly the former vice president wasn’t in a dominating position [to win the Democratic nomination] until March of 2020, he was in a good position. So this is why I would consistently say, “Look, Joe Biden has the best shot of winning of any of the candidates.”

Second, I think that there was a misunderstanding/a misapplication of what I deem to be the true margin of error. That is how far off the polls are once you take into account time until the election, things that don’t just include sampling error — nonresponse, misappropriation of weights, whatever. And essentially, what I see my job as doing is making sure I’m telling people that. In the weekend before the 2016 election, I was saying, “Look, Donald Trump is just a normal polling error away from winning. It really wouldn’t be that crazy for him to win at this point.”

And I think the final thing I’ll note, which is I think is so important: It’s really easy to tell people what the most likely outcome is going to be. What’s more difficult, and what I’m not sure we necessarily as a statistical community do enough, is explaining to folks, “Okay, what’s the unlikely outcome in this situation? And how do we get to that unlikely outcome?” Donald Trump, at this point, is not the most likely person to win the November election. But how is it that we get to the point where he does win? What needs to occur, and what’s the chance of that occurring?

Let’s talk about the Jewish vote. It seems like every election, Republicans say this is going to be the year they get more Jews to vote for them, and it never really seems to end up that way. Trump has tried to make inroads – have you seen anything to indicate that he’s going to have any success with that?

Not really. I think, obviously, as you hinted it, it’s something that is continuously brought up. But you know, we have basically over the last few decades hit a point where the Democrats win the Jewish vote between somewhere between 45 and 60 points, and I haven’t seen anything that indicates that that will shift significantly. Obviously, we’ll have more data, as we get closer to the election, but at this particular point, I have not seen anything that indicates that we’re going to shift significantly from that.

We have seen a number of polls from 2020 and we know that Jews on the whole overwhelmingly disapprove of Trump’s job performance. I think his net approval is around minus-40 points. We know that the Democrats are much better liked among Jewish voters, and we know that in the polls that were taken before the primary that Biden was up by nearly 40 points among Jewish voters. And my guess is that is even larger now that you know he attained the nomination and he’s obviously also extended his lead. So I have not seen anything to indicate that Trump will get more than 30% of the Jewish vote, and I wouldn’t be surprised if it’s even lower than that.

I don’t know how much work you do on international elections, but Israel has had an unusually hard time with elections over the past year-plus. Do you have any special insights into Israeli politics?

I mean, I think Bibi Netanyahu has been prime minister for the majority of my life, or very close to it, and that is a very odd thing that, especially [since] during most of my father’s life, [Israel] elected left-leaning leaders. Obviously, that is not where Israel is today. There’s a center, but I’m not sure there’s really much of a left.