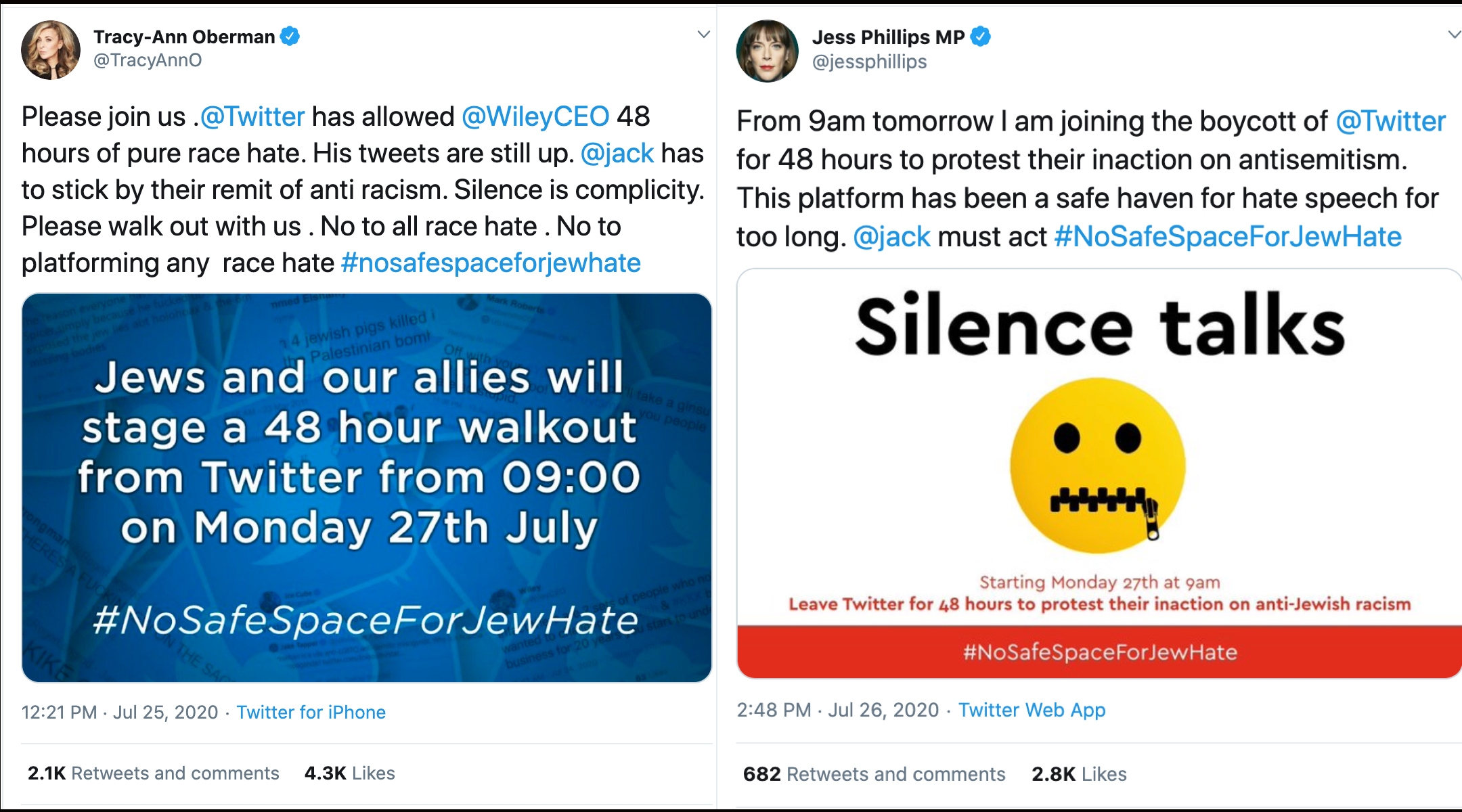 After British actress Tracy-Ann Oberman called for a 48-hour boycott of Twitter to protest anti-Semitism on the platform, many British politicians joined in. (Twitter)
Advertisement

(JTA) — After their vocal calls for Twitter to take down rapper Wiley’s spree of anti-Semitic tweets went unanswered, Jews in the United Kingdom are taking another approach: silence.

British Jewish activists and their allies — including high-profile celebrities, both Jewish and non-Jewish — are staging a 48-hour boycott of Twitter to protest the platform’s handling of anti-Semitic posts.

Among the people and organizations going silent until Wednesday are British Chief Rabbi Ephraim Mirvis and his predecessor Jonathan Sacks, members of Parliament, Israeli elected officials and leading Jewish organizations in Canada and the United States.

Before going dark, Mirvis posted a letter to Twitter CEO Jack Dorsey calling for action against anti-Semitism on the platform he co-founded more than a decade ago. “Your inaction amounts to complicity,” Mirvis wrote.

The protest took root after Jewish actress Tracy-Ann Oberman, who became famous for her role on “East-Enders,” tweeted on Friday night that she was considering abandoning Twitter over Wiley’s two-day spree of aggressively anti-Semitic posts.

A British activist named Saul Freeman approached Oberman with the idea of the boycott, the Jewish News reported. Freeman had previously focused his energy largely on advocating against anti-Semitism in England’s Labour Party.

Please join us .@Twitter has allowed @WileyCEO 48 hours of pure race hate. His tweets are still up. @jack has to stick by their remit of anti racism. Silence is complicity. Please walk out with us . No to all race hate . No to platforming any race hate #nosafespaceforjewhate pic.twitter.com/gKFDedjzmM

Oberman announced the boycott on Saturday using the hashtag #NoSafeSpaceForJewHate. Over the weekend, hundreds if not thousands of people declared their intention to participate. They included both Jews and non-Jewish allies.

“I have been in awe of the spirit, organisation and mobilisation of British Jews as they stood up against the rising tide of antisemitism, tearing the mask of the so-called ‘antizionists, not antisemites’ to prevent Britain from dangerous descent,” tweeted Einat Wilf, the former member of Israel’s parliament. “For them: #NoSafePlaceForJewHate.”

The British singer-songwriter Billy Bragg retweeted a message from a Holocaust education organization and wrote, “Social media companies are not doing enough to counter the spread of hate speech on their platforms. I’ll be taking part in the 48 hour walk out from @Twitter in solidarity with the Jewish community.”

And Sarah Brown, the nonprofit leader who is married to a former prime minister, encouraged her 1 million followers to participate. “Best way to be an ally now is to join this 48 hour Twitter walkout in solidarity with the Jewish community,” she wrote. “Antisemitism is unacceptable. So I am off for 48 hours. Hope you are too.”

The effort is reminiscent of Blackout Tuesday, the day last month in which many social media users responded to a call to post black squares to show their solidarity with the Black Lives Matter movement. That display drew wide attention — and also criticism that it effectively silenced the movement’s supporters at a time when their voices were needed.

That criticism also emerged in response to the #NoSafeSpaceForJewHate boycott.

“This is so misconceived that it almost feels deliberate,” @MaxSparber tweeted in response to Oberman’s announcement. “We don’t fight bad speech by deplatforming ourselves.”

“Antisemitism flourishes most in places where Jews are absent. Easy to be an ‘other’ when we’re not there,” tweeted @avishaiw. “Sooo … Gonna continue to be here. Not walking out. And I’d advise other Jews not to walk out. Sorry.”

The protest has already yielded some concrete actions. Twitter has temporarily banned Wiley from posting and deleted his anti-Semitic tweets after leaving them up for nearly two days. And one of the United Kingdom’s most powerful politicians, Home Secretary Priti Patel, has called on the social media company to explain the delay.

Anti-Semitism on social media platforms has emerged as a pressing issue for groups working to quell what is understood to be a global rise in anti-Semitic activity. But leading groups in the United States have lately been focusing on Facebook, the largest platform, where the Anti-Defamation League and the NAACP are in the middle of leading a monthlong advertiser boycott that appears to have cut into the company’s bottom line.