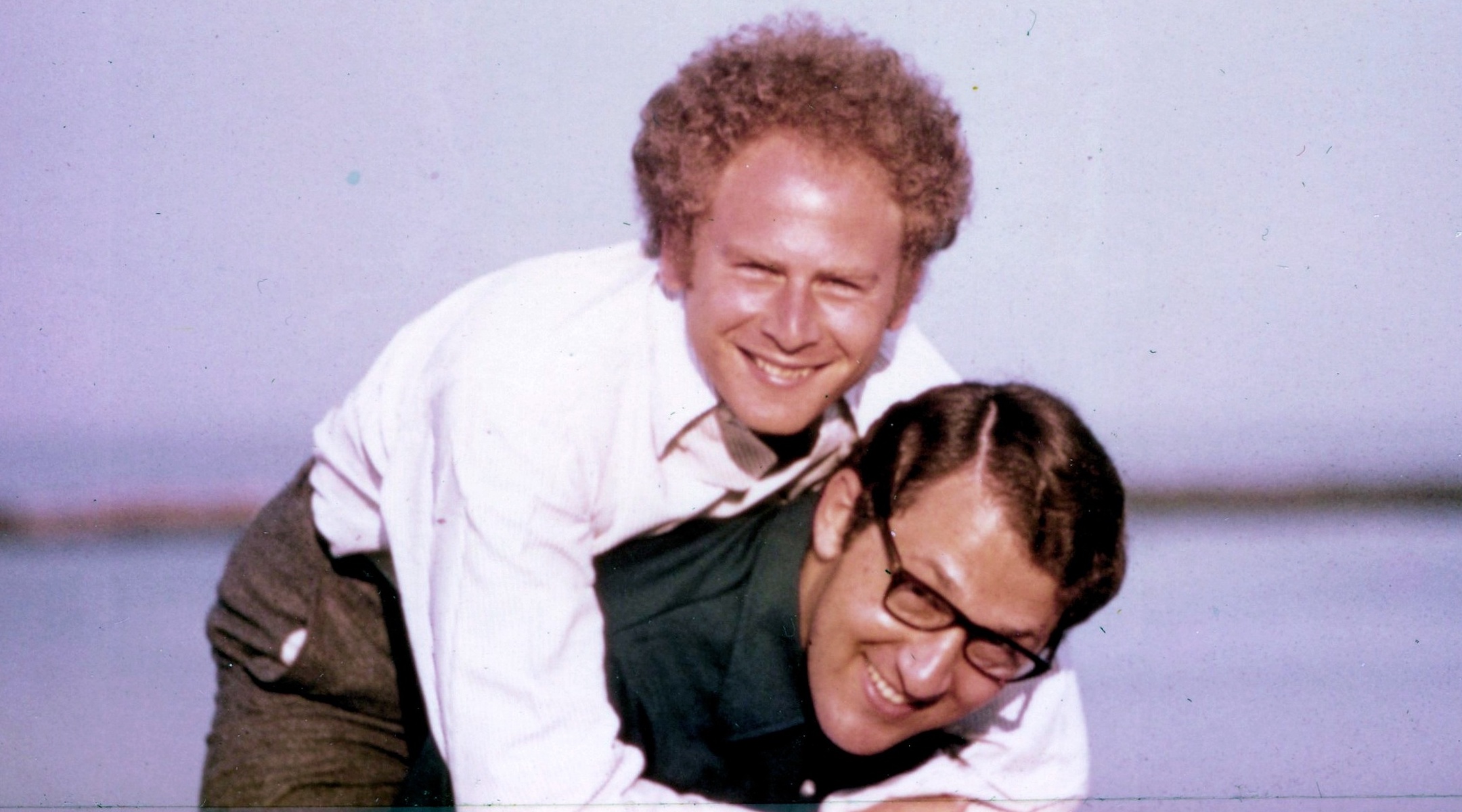 Art Garfunkel and Sandy Greenberg in the 1970s. (Courtesy of Greenberg)
Advertisement

(Pittsburgh Jewish Chronicle via JTA) — Sandy Greenberg recalls walking along Amsterdam Avenue in New York City with his best friend Arthur back in 1959 after they had just completed a humanities class at Columbia University. During the trek, his friend stopped to point out something that caught his eye.

“‘Sanford, I’d like to show you this patch of grass and I’d like you to really look at it,’” Greenberg recalled Arthur saying. “At first I was stunned, then he was pointing out how the light illuminated the beauty and complexities of its colors. I was absolutely mesmerized. No one I had known would take time out to admire a measly patch of grass.”

Greenberg’s best friend and college roommate would soon be better known to the rest of the world as Art Garfunkel, one half of the pop-folk duo Simon & Garfunkel. His recollection of that shared moment is ironic since less than two years later, Greenberg would be blind.

“I was pitching in a baseball game right before my junior year,” Greenberg, a native of Buffalo, New York, told the Chronicle. “Suddenly, in the seventh inning my eyes became very cloudy, very steamy, and I was having a hard time concentrating on the batter. I knew there was something very bad going on. I stumbled to the sideline and dropped to the ground.”

An ophthalmologist diagnosed Greenberg with allergic conjunctivitis. After two treatments, one he labeled as “ineffective” and a second of topical steroids, his condition worsened. A different doctor told the American history major that he was actually suffering from glaucoma and, due to the previous treatments, would soon be blind.

In his memoir, “Hello Darkness, My Old Friend” (Simon & Schuster, June 2020), Greenberg credits Garfunkel with lifting him from the pits of despair and helping him to begin navigating life as a blind man at just 20 years old.

“He changed all of his habits to help me out,” Greenberg said of Garfunkel. “He would take me out in the city, walk me to class, help me fix my tape recorder.

Greenberg eventually graduated from Columbia and earned a doctorate from the Department of Government at Harvard University. He married his high school girlfriend, Sue, and along the way he owned various businesses and became an inventor.

He also was chairman of the board of governors of the John Hopkins University’s Wilmer Eye Institute; served on the Mac Science board, which operates overseas as the National Science Foundation; was the chairman of the Rural Health Care Corp., which brought telemedicine to rural parts of the country; became a member of the Council of Foreign Relations; and worked in the White House under President Lyndon B. Johnson.

His father, Albert, moved to the United States in 1939 to escape the Holocaust and became a tailor, but he died when Greenberg was just 5. His mother remarried and raised three children with her second husband, Carl.

The family seemed predisposed to unusual and unlikely eye crises. Carl was hit in the eye by a disgruntled employee and required a prosthetic. Greenberg’s grandmother, Pauline, also lost an eye from a broken spring in a cradle while babysitting at the age of 8 in her native Poland.

Greenberg, a member of the Conservative Adas Israel Congregation in Washington, D.C., considers himself both religious and very spiritual.

“‘The most beautiful experience we can have is the mysterious,’” said Greenberg, quoting Albert Einstein. “‘It is the fundamental questions which stand at the cradle between true art and science. Whoever does not know it can no longer wonder, can no longer marvel. He’s as good as dead and his eyes are dim.’ He was talking about God and religiosity.

“For me, being religious means you must wonder at the blessings all around us. We must model God’s creation, otherwise we miss the magic of daily living.”

Memories of davening with Garfunkel at the window in their college dorm room ignite that wonder for Greenberg.

“Anyone hearing his voice singing the prayers, they would be in simple awe,” Greenberg recalled. “Throughout life I have been blessed with music, music that came from the sweetest singer in the universe.”

He recalled Garfunkel’s voice as “displaying deep and warm love I could actually feel.”

After graduation, when the singer decided to leave architecture school and follow his dreams to create music, Greenberg had the opportunity to pay back his friend.

“One day, after we graduated and I had gone on to Oxford, I got a call from Arthur, who said he was dropping out of architecture school, which I was opposed to, but that was his decision,” Greenberg related. “He said, ‘I want to go into the music business with my friend Paul. But I need $400.’ Before he finished, I told him he would have it. Sue and I had $404 in our checking account and I sent it.”

The two had made a pact back in their dorm room that if either ever needed help, “the other would come to his aid regardless of circumstance.”

Though Greenberg has a deep and abiding love and friendship with Garfunkel, there is one partner that has provided the cornerstone to his life.

“I have to talk about the centrality of my then girlfriend, now wife, Sue. I dedicated the book to her and I said, ‘For Sue, the one who has always been there.’ She has,” Greenberg said.

“When I went blind, I was convinced that she would leave me. She stayed with me through the ugliest part of my life. She was valorous and, in my mind, the hero of the book, certainly the center of gravity for my life. You can read it, she’s on every page in the book.”

In 2012, the Greenbergs created the Prize to End Blindness by 20/20. On Dec. 14, the award of $3 million in gold will go to the individual or team of researchers that does the most to end blindness across the globe.