They wanted to convert to Judaism, but the mikvahs were closed. So instead they went to Jewish summer camp. 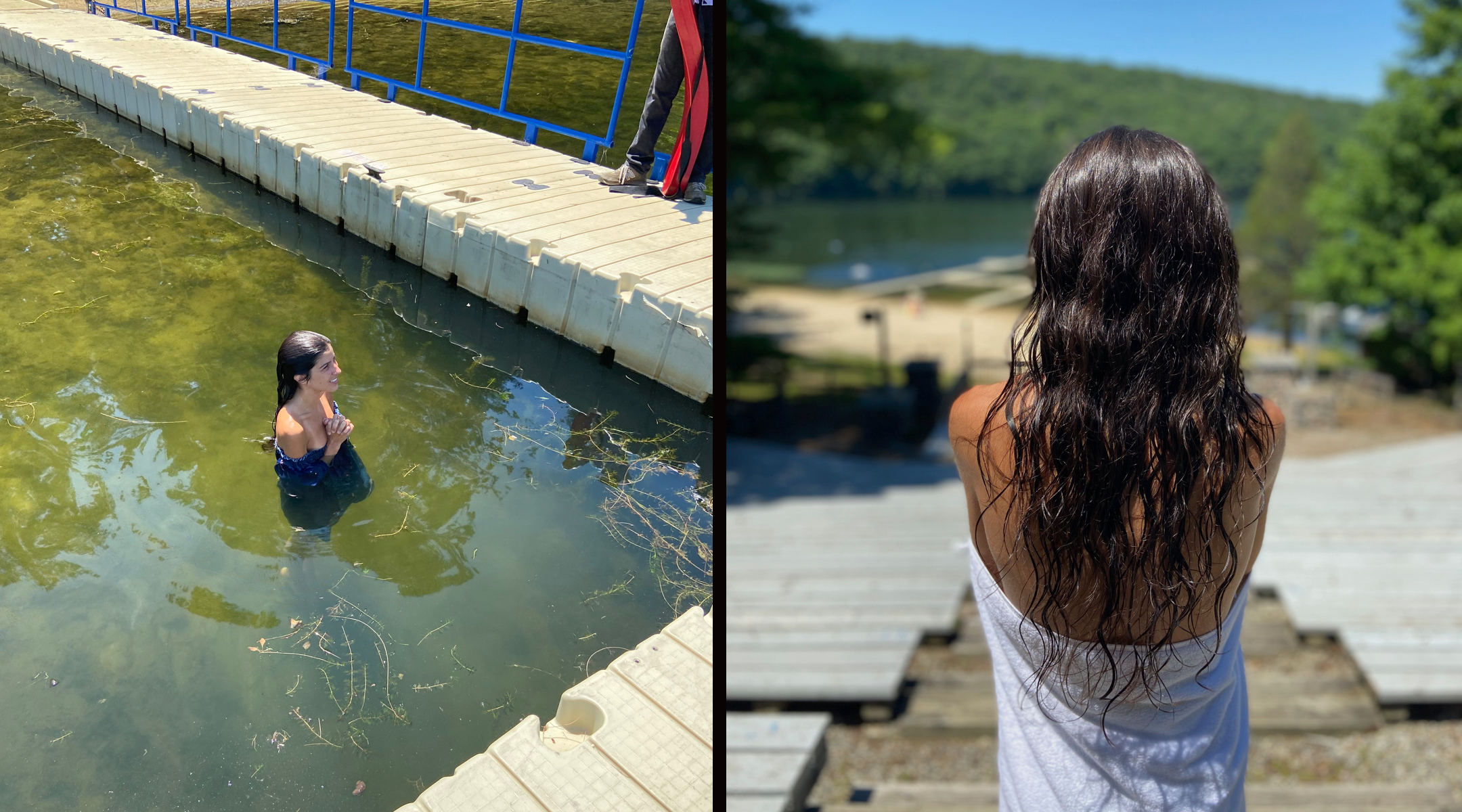 Alexa Rae Ibarra immersed in the lake at Camp Ramah in the Berkshires to complete her conversion to Judaism. (Courtesy of Ibarra)
Advertisement

(JTA) — On a typical summer day, hundreds of kids can be found around the lake at Camp Ramah in the Berkshires splashing around in the water, taking swimming lessons, paddle boarding and playing on giant inflatables.

“The opposite of calm” is how the camp’s director, Rabbi Ethan Linden, describes it.

But with the camp closed this summer due to the coronavirus pandemic, the lake found a different purpose earlier this month: as a ritual bath. Fifteen Jews by choice immersed themselves there to finalize their conversions.

Clad in a mask, Linden looked on from the dock along with a lifeguard, another staff member and two rabbis who traveled from Manhattan and New Jersey as the candidates waded into the water. One by one they immersed themselves fully, emerging officially as Jews.

“The outdoor aspect of it was the most magical part because it was so open and so free, and so beautiful out there,” said Alexa Rae Ibarra, a 29-year-old yoga instructor. She had traveled to the Berkshires with her longtime boyfriend from the Hamptons, where the couple have been spending time during the pandemic.

When Ibarra started studying for her conversion in September, she had assumed that she would be immersing at an indoor mikvah in New York City, where she usually lives, at its completion in June. After the conversion, she had plans to travel to Israel “to have the full experience.”

But as the coronavirus started spreading widely in New York in the spring, Ibarra realized things wouldn’t happen as she had planned.

Like many other converts, she found herself thrust into uncertainty as some mikvahs closed, while others did not allow more than one person to come along to appointments, as is necessary for conversions.

“When things didn’t go to plan, I just remember being really, really sad and unsure of what would happen,” said Ibarra, who studied Judaism through the Center for Conversion to Judaism at Town & Village Synagogue, a Conservative congregation in Manhattan.

Ten months ago I made a decision to convert to Judaism. There were a few deciding factors but at the end of the day, if I was committing to something whole heartedly, it had to be for me and no one else. I say this because, yes I absolutely want to raise my children Jewish, I say this because you have to be on the same vibe as your partner, on what you see for your future, but that commitment and time your taking from your regular life, is going to change and YOU have to be prepared for that… not your partner. I spent that last 40 weeks ( the time it takes to form a child) dedicating every Tuesday for three hours on learning about the Jewish religion, diving deep into Hebrew and ultimately realizing, this was totally for me. I learned to make challah, celebrate high holidays and even begin my own Shabbat traditions. As our studies come to an end and we get to celebrate the entire process it has taken to get here, The mikveh. None of my born-Jewish friends had ever actually been in one. And the idea of a ritual purification seemed very, well, religious. For someone for whom chanting Namaste at the end of yoga class was for many years the closest thing to a spiritual practice, the mikveh was a big escalation. A little different this year given COVID-19 BUT thats ok, we did not give up. Standing in front of the Beit Din as I’m asked my final prayers, sub merging into a lake and being able to call myself a conservative Jewish Colombian woman, is the most empowering, flooding feeling of incredible emotions. Perhaps naively, when deciding to convert I had focused on the cultural aspects of Judaism—the warmth I’d always felt in Jewish families, the food, the sense of humor. But that’s exactly why I converted: because of the comfortability, the warmth, the traditions and conversations that were always to be had. This is something I have yearned for since I was a young girl… a community. I know shocking to hear from a social yoga instructor but believe it or not… I’m still searching for the answers, and my search doesn’t end here- it actually starts here. I have much to say but will leave it here. My Jewish given name is Ahava. Ahava means love. I am love. ✡️ 🤍

Some students studying through the center had finished courses as early as April but were unable to finalize their conversions due to the pandemic. Rabbi Laurence Sebert, who leads Town & Village Synagogue, was struggling to find a solution one day while talking on Zoom with Rabbi Joel Shaiman, the conversion center’s program coordinator.

Looking at his screen, Sebert could see the ocean in the background behind Shaiman’s Jersey Shore home. That sparked a realization: Instead of using a traditional mikvah, they could use a natural body of water, which can be used as a ritual bath according to Jewish law.

The rabbis initially considered going to the Jersey Shore, but after realizing it would be hard to find a private spot, they thought of Ramah. Both have connections to the upstate New York camp, which is affiliated with the Conservative movement. They reached out to Linden, the camp director, who was on board.

“The idea was, we have this beautiful natural mikvah at camp, this beautiful lake, and obviously like most nonprofit Jewish summer camps this summer, we are not open this summer and I said to them we should use the lake at camp,” Linden said.

In fact, the lake is used as a mikvah by staff members during the summer who observe the laws of ritual purity, which mandate that a woman needs to immerse after menstruation in order to resume sexual relations.

Lake Ellis at Camp Ramah turned out to be just what the rabbis wanted. The converts immersed after meeting shoreside with a beit din, a rabbinical court that was made up of Shaiman, Sebert and camp staff members.

“It was the perfect setting for this transformational moment for all of these people,” Sebert said. “They had been waiting, many of them for several months at least, and didn’t think that it was going to happen anytime soon.”

A few adjustments were made. Converts usually immerse naked and a sheet is used for modesty, or rabbis stand behind a partition. Since it was harder to maintain privacy in an open lake, however, they instead wore loose clothing. Attendance at a mikvah is limited typically to the rabbis and the convert, but since there was more space at the lake, the Jews by choice got to bring along a few family members or friends. Two even brought their dogs.

Ibarra said being able to bring her boyfriend, Justin, made it even more special.

“I remember him being behind me and thinking, ‘Nobody, not anyone, will understand or experience what we both have experienced today.’ It was such a moment for both of us,” she said.

In fact, it was such a positive experience that the rabbis are considering bringing up another group of converts to the Berkshires at the end of August.

“In some ways it was getting back to the ‘ikar,’ the essence, of how we do this,” Shaiman said. “A mikvah in the city is really a second-best alternative. … Back to nature is kind of the way it was originally done.”