(JTA) — The religious Jewish world has created some unusual jobs, from shofar makers to etrog pickers to mashgichim – kosher certifiers whose job is literally to watch others cook.

But one of the more bizarre surely belongs to Dr. Yeshaya Shafit, who is Russia’s only mohel, or professional circumciser, for adult men.

Shafit, a 56-year-old surgeon, travels across that vast country to circumcise about 10 Jewish adults every week, splitting his time between Russia and the United States. Jewish ritual circumcision, called a bris or brit milah, is typically performed on 8-day-old babies, as dictated by Jewish law. Adult circumcision is common for Orthodox converts to the religion and others who become more religious later in life.

In Russia, the adult demand is very high because many Jewish men were denied the procedure during the time of the communist Soviet Union, when Jewish religious practice was effectively outlawed. Throughout the country, circumcision was not allowed unless it was required by a medical condition.

Russia’s chief rabbi, Berel Lazar, a Chabad-Lubavitch leader who grew up in Italy and settled in Russia in 1987, remembers a time in his new land when performing a bris required being part of an illegal conspiracy.

“There was a clandestine underground. You’d show up at a designated time, get picked up in a car, blindfolded and taken to an apartment in Moscow where the mohel would wait,” said Lazar, who helped facilitate many of these procedures.

The blindfold was to prevent men who were circumcised from later divulging, willingly or otherwise, the location and identity of those who helped circumcise them, the rabbi explained.

The conditions “were not great for surgeries,” Lazar said, “yet dozens of people asked to be circumcised.”

Fortunately, “nothing bad happened during those clandestine britot,” he added. But as soon as the Soviet Union fell, “it was clear that we needed to improve conditions, and that included hiring an experienced, talented and motivated surgeon for this position.”

The procedure is much more complicated for adults, requiring a skilled surgeon who is qualified to administer anesthesia and perform medical interventions if complications arise. Mohels who perform infant circumcisions are often not doctors.

So Lazar hired Shafit, a Russia native who moved to Israel in the 1980s, in 1990. Shafit spent time as a hand surgeon at Hadassah Hospital in Jerusalem, but returned to Russia to work under Lazar and as a representative of the Brit Yosef Yitzchak charity, an international organization affiliated with Chabad. Founded in 1989, the group facilitates free circumcisions for Jews around the world.

Before the fall of the Berlin wall, Shafit would perform the circumcisions during his vacations. It’s a tough job involving much travel and time away from his wife and two children living in Philadelphia, he said. (His family had moved there about a decade ago in connection with the higher education of his children.)

Now Lazar’s Federation of Jewish Communities of Russia, a nonprofit that is the main organization in that country’s Jewish community of about 250,000, keeps a permanent clinic for circumcision in Moscow, where most Russian Jews live.

But Russia, whose land area is nearly twice that of the United States, has many far-flung Jewish communities, including in Kaliningrad in Russia’s far west and Vladivostok, opposite the Japanese shoreline.

His travel expenses are covered by Chabad emissaries who invite him over to perform operations or by Lazar’s office. And Shafit sees the work as a worthy cause.

“It’s like a vaccine for a person’s sense of identity,” he said. “Once you do it, that man will never forget who he is.” 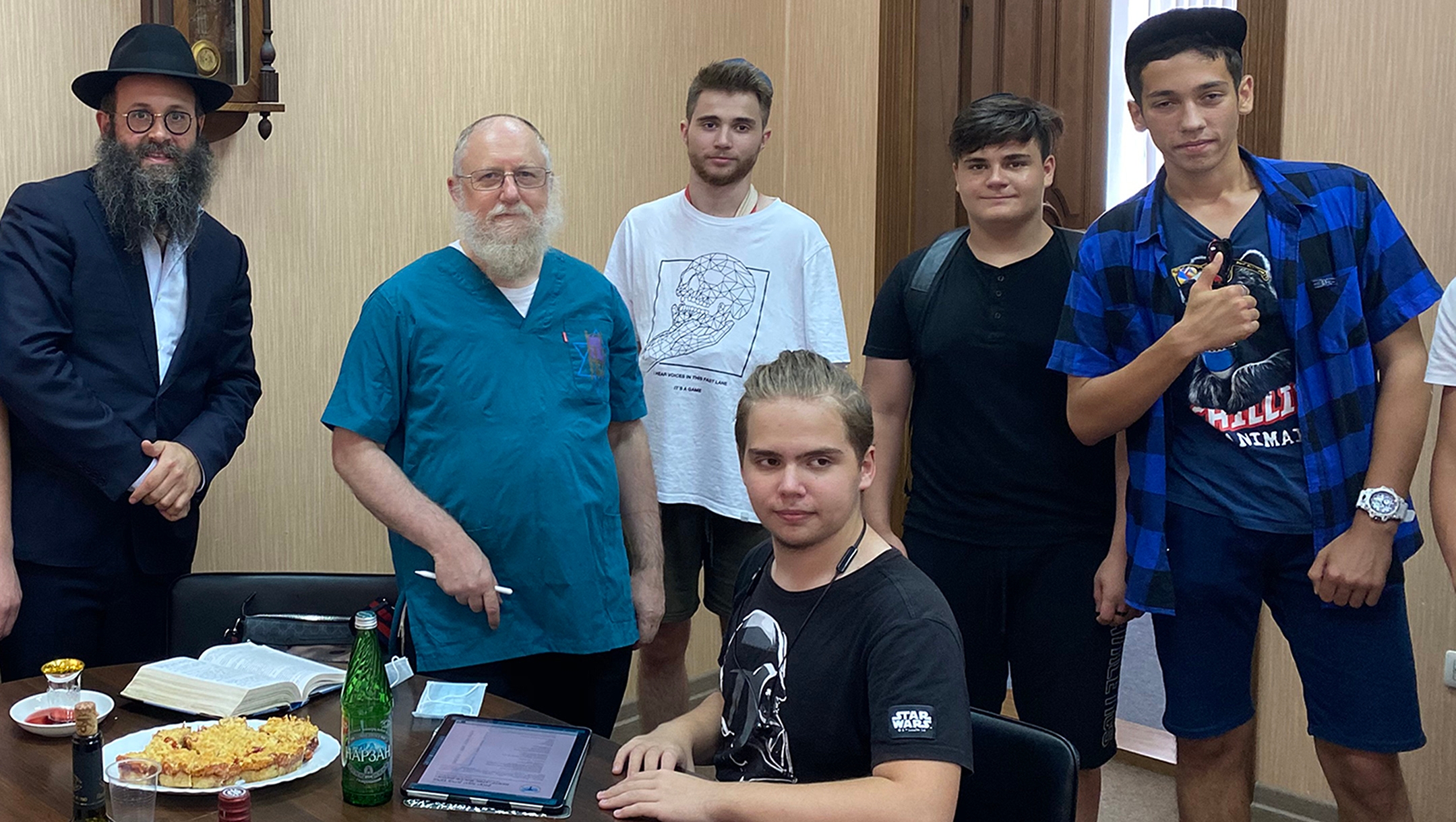 Rabbi Chaim Danzinger, left, introduces Dr. Yeshaya Shafit, second from left, to Jews awaiting circumcision at the synagogue of Rostov-on-Don in Russia, July 27, 2020. (Courtesy of the Jewish Community of Rostov)

Shafit has circumcised at least 7,000 Russian men since entering his post, with some of the procedures conducted at clinics and hospitals. Rabbis in each city — typically emissaries for the Orthodox Chabad movement, the largest organized Jewish group in Russia — line up several candidates.

Other times Shafit uses more unusual settings: apartments, synagogue back rooms or even a rabbi’s office.

For the more remote communities without a devoted clinic, Shafit came up with a cheap and hygienic solution: foldable massage tables.

“Economic, easily stowed, designed to be cleaned to sterility. Huge improvement,” said Shafit, a laconic interlocutor who during an interview showed a preference to discussing logistics over emotions or ideology. “You’ll find one in the storage room of most Russian provincial synagogues today.”

These arrangements were of no use during the coronavirus crisis, which hit when he was visiting his family in the U.S. He was kept out of Russia for four months due to the country’s emergency measures. When he was finally allowed to reenter, Shafit had to self-isolate for two more weeks.

Meanwhile, Sergei Chernovol, a 37-year-old man who learned that he is Jewish only two years ago, was “climbing the walls” waiting for Shafit to travel to Chernovol’s hometown of Rostov-on-Don in western Russia.

“I made the decision, picked the date for March 27 — and then everything was canceled indefinitely,” said Chernovol, a renovations contractor who belongs to the Chabad congregation in Rostov and discovered his Jewishness after digging into the history of his maternal relatives.

The waiting was “devastating,” Chernovol said with tears in his eyes during a recent video interview.

His chosen date was the 100th anniversary of the death of the fifth spiritual leader of Chabad, Sholom Dovber Schneersohn, who died in Rostov. Two other members of the congregation were supposed to be circumcised at the end of an event commemorating Schneersohn’s passing.

Shafit finally made it to Rostov, where he circumcised Chernovol and the two others on July 27.

To Chernovol, the sense of urgency stemmed from the Hebrew-language meaning of the term brit milah — its literal translation is “pact of circumcision.”

“Two years after reconnecting with my Jewish identity, I had already made the pact in my mind and my soul,” Chernovol said. “But to move on and live the way I’m supposed to live, I still needed to do the actual milah.”

Getting off Shafit’s operating table was “a great relief, like a weight had been lifted and an obstacle has been cleared,” he added.

“[The circumcision demand] is a symbol to how Russian Jews are connected to Judaism even after decades of repression,” Lazar said, “and the sacrifices they’re willing to make to establish that connection.”