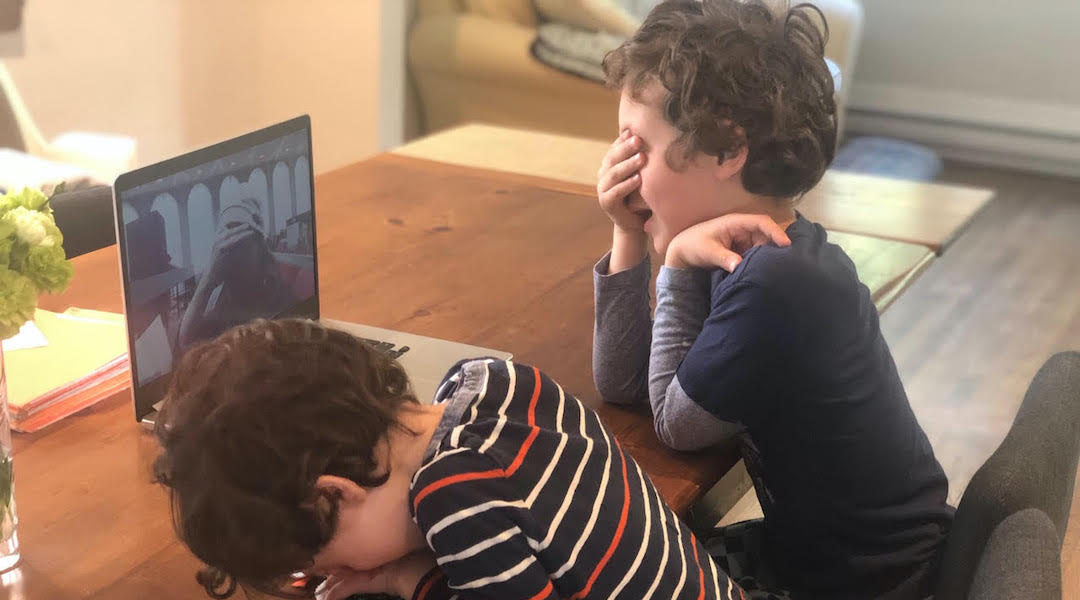 (JTA) – In Montreal, the boxes will include apple or honey cake mix. In New Hampshire, they’ll include bird seed. And many synagogues will distribute apples and honey, the snack that symbolizes a sweet new year.

The packages are among many that will start to land soon on the front steps of Jewish homes: deliveries of prayer books, art supplies and gifts meant to make a High Holiday season spent at home a little less lonely and a little more spiritually fulfilling.

“What we’ve learned over these months is that to create an online program is not just to take an in-person program and just to put it online, it’s a new field of engagement,” said Rabba Rachel Kohl Finegold of Congregation Shaar Hashomayim in Montreal. “You need something tangible.”

The High Holiday boxes reflect a dawning awareness that with most synagogues closed or at least curtailed, homes are now the center of the Jewish experience. Just as people the world over have begun baking sourdough bread during the pandemic, many Jews have started baking their own challah. Now as the coronavirus pandemic extends into the second half of its first year, synagogues and other Jewish organizations are taking new steps to make home practice easier to access.

To some, the shift in focus from synagogues to homes as the center of Jewish life is a healthy recalibration for a culture in which synagogues had become too central.

“We’ve sharply differentiated home from synagogue … and we’ve put all our energy into the synagogue,” said Rabbi Lawrence Hoffman, a professor at Hebrew Union College who researches synagogues, liturgy and ritual. “Instead of two separate entities, we now have the opportunity to share from one home to another.”

Hoffman himself has found that the pandemic has changed the way he observes Shabbat. When the pandemic first started, he started singing Shabbat songs on Friday afternoon with his children and grandchildren over Zoom. Eventually the gatherings became a weekly ritual and incorporated songs, candle lighting and a full Shabbat dinner conducted over Zoom.

“We worry about synagogues … but at the same time we have a strong home ceremony that keeps us going and it’s partially the secret of our success,” Hoffman said. “It’s kind of an exciting moment in time when we’re experimenting with open scripted rituals in our homes that could become anything.”

Kohl Finegold and others in her position are traversing uncharted territory, according to Vanessa Ochs, a professor of Jewish studies at the University of Virginia. She said this year’s Passover had effectively been a “Jewish boot camp,” as people who might normally attend a family or communal Seder had to figure out how to make one themselves, and now the lessons are being applied to the High Holidays.

“How do you do Rosh Hashanah on your own? Our community hasn’t invented that yet,” she said.

That invention is underway. A website that sells Passover haggadahs — and allows users to compile resources to create their own — has launched HighHolidays@Home, which invites users to “download a simple Rosh Hashanah Seder & Yom Kippur Guidebook or mix & match to create your own holiday gathering.”

Rabbi Yael Buechler, a school rabbi and founder of Midrash Manicures, a company that sells Jewish-themed manicure kits, said she noticed Rosh Hashanah cards becoming less popular over the years but thought this year would be the perfect opportunity to bring them back. She collaborated with a New Yorker cartoonist to create Rosh Hashanah cards that feature an apple and honey separated by a Zoom screen.

“This is a really unique opportunity for young people to use cards — hand-written notes are really powerful — to reach out to family and friends they haven’t seen for months,” Beuchler said.

Support is also coming from the synagogues that congregants this year cannot enter. In addition to making sure they have easy-to-access Zoom setups and prayer books to follow along with at home, many congregations are distributing supplies aimed at enriching the holiday experience.

At Temple Beth Jacob in Concord, New Hampshire, Rabbi Robin Nafshi is planning to send congregants a package of materials for tashlich, the ritual in which Jews throw bread crumbs into water to symbolize the casting away of sins.

With the day when tashlich would be performed falling on an early-fall Sunday this year, Nafshi was concerned about trying to assemble the congregation with proper social distancing at potentially crowded local bodies of water. So congregants at the Reform synagogue will get packets of bird seed in their holiday boxes, which volunteers will hand deliver throughout the region. (The synagogue has used bird seed in place of the traditional bread, which can be harmful to birds and fish, for years.)

“Like everyone, we’re trying to figure out this online world where we’re trying to find ways to make this more personal,” said Nafshi. She said she hopes the packages will “remind them that our clergy and board and staff are thinking of them.”

At Kohl Feingold’s synagogue, where she is director of education and spiritual enrichment, families will get a box before Rosh Hashanah that will include chocolate bars for the kids and conversation starters to fuel meaningful conversation during holiday meals.

Families will also get a glass jar filled with premixed dry ingredients for a honey or apple cake. The idea is for families to bake together for the holiday, then use the container to keep notes marking things to be grateful for or good deeds to bring the lessons of Rosh Hashanah into the rest of the year.

Kohl Finegold plans to use the box model in the synagogue’s religious school this year, creating kits for each of the school’s four- or five-week-long units.

“It’s opening up a world of possibility that brings us into the children’s homes in ways that I think just weren’t as easy to do before,” she said.