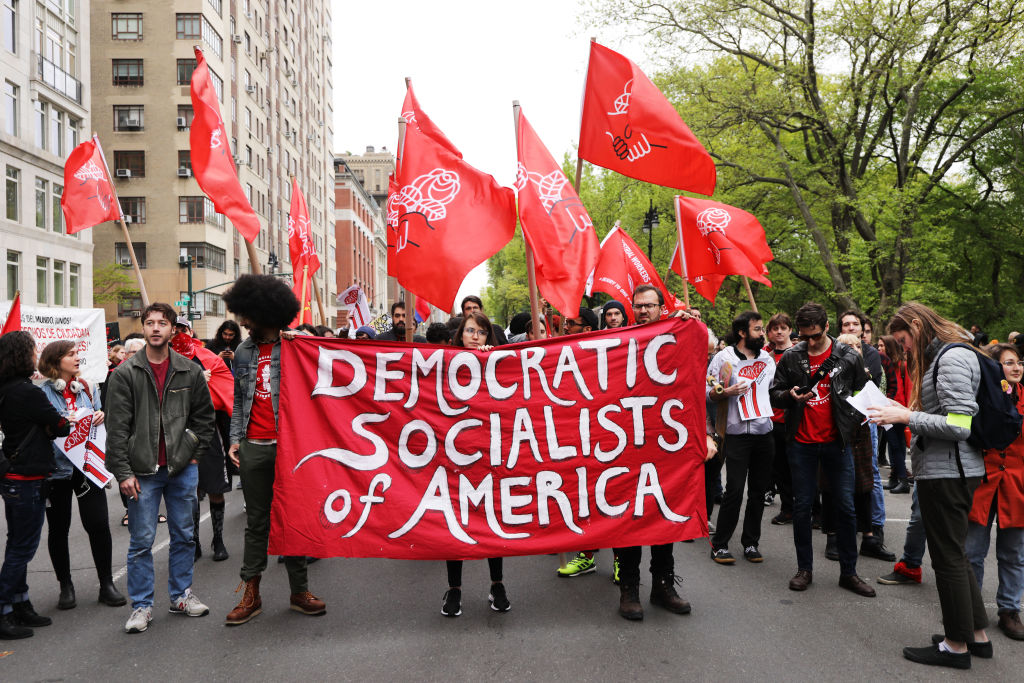 Members of the Democratic Socialists of America gather outside of a Trump owned building on May Day, 2019 in New York City. (Spencer Platt/Getty Images)
Advertisement

(JTA) – Lots of candidates for New York City Council are expected to seek an endorsement from the local Democratic Socialists of America chapter, a rising force in city politics, in next year’s elections.

To apply for the endorsement, the candidates will have to decide if they will pledge not to travel to Israel if elected.

According to a screenshot of a candidate questionnaire from the DSA posted to Twitter by local reporter Zack Fink, candidates are being asked to “pledge not to travel to Israel if elected to City Council in solidarity with Palestinians living under occupation.” Israel is the only country addressed in the foreign policy section of the questionnaire.

The group also asks candidates if they support the Boycott, Divestment and Sanctions movement, which is part of the New York City DSA chapter’s platform.

The local DSA chapter said the question was posed in response to calls by Palestinians for elected officials not to go on free trips to Israel that are intended to build ties between local officials and Israel. “It is the only country that Councilmembers are regularly taken on delegations to visit for this purpose. Yet, Palestinians have lived under military occupation and siege, been displaced from their homes and denied freedom of movement for decades,” the group said in a statement.

They later clarified that the group is “in no way opposed to trips in a personal capacity to visit family or for other personal reasons.”

Some candidates declared their answers already on Twitter. “Easy: 1. No. 2. No,” Eric Dinowitz, a teacher (and son of a state Assemblyman) who is running for City Council in the Bronx, posted late Thursday.

Tali Farhadian Weinstein, a candidate for Manhattan district attorney, criticized the question in a tweet Thursday. “So let me get this straight. Per this questionnaire it would be ok for me to travel to Iran, the country of my birth, which hangs men for being gay and may stone women for adultery, but not to Israel,” she wrote.

Brad Lander, a city councilman representing parts of Brooklyn with large progressive and Jewish communities and a candidate for comptroller, said in an emailed statement that he had traveled to Israel and would do it again. “If DSA wants to know what candidates will do to end the occupation and support the human rights and self-determination of Palestinians, that’s what they should ask,” said Lander.

The Jewish Community Relations Council of New York, which runs trips to Israel for New York City Council members, called the question anti-Semitic. “Elected officials should not be denied an immersive opportunity to deepen their understanding of Israel.  Including this demand – on the same day that a historic peace agreement was announced between Israel and the United Arab Emirates – reveals a policy undeniably singed by anti-Semitism,” said Michael Miller, executive vice president and CEO of the JCRC.

The questionnaire comes after pro-BDS activists were vindicated this month when Reps. Rashida Tlaib and Ilhan Omar, who have voiced support for the BDS movement, both won their Democratic primaries. Both represent overwhelmingly Democratic districts where they are likely to be reelected to Congress. A third congressional candidate who has indicated support for the BDS movement, Cori Bush in Missouri, also defeated a longtime incumbent in her primary.

With 35 out of 51 city council seats up for election this year due to term limits as well as open elections for citywide offices like mayor and comptroller, citywide elections in New York City next year present a rare opportunity to reshape most of New York City’s government.

The DSA is considered to be a rising force in New York City after helping Alexandria Ocasio-Cortez defeat incumbent Joe Crowley in 2018. In this year’s Democratic primary, DSA member Jamaal Bowman defeated Eliot Engel, a longtime incumbent and champion of Israel. Far from pledging to boycott Israel, Bowman has indicated his backing, last week telling City & State, “I am in full support of Israel.”

Nationally, the political party formally endorsed the BDS movement in 2017. It is now in the process of negotiating a unified platform to be adopted next year. Local candidates in Boston this year were asked whether they would support the BDS movement “publicly, privately, and under pressure from opposition” but not whether they would personally pledge not to travel to Israel.