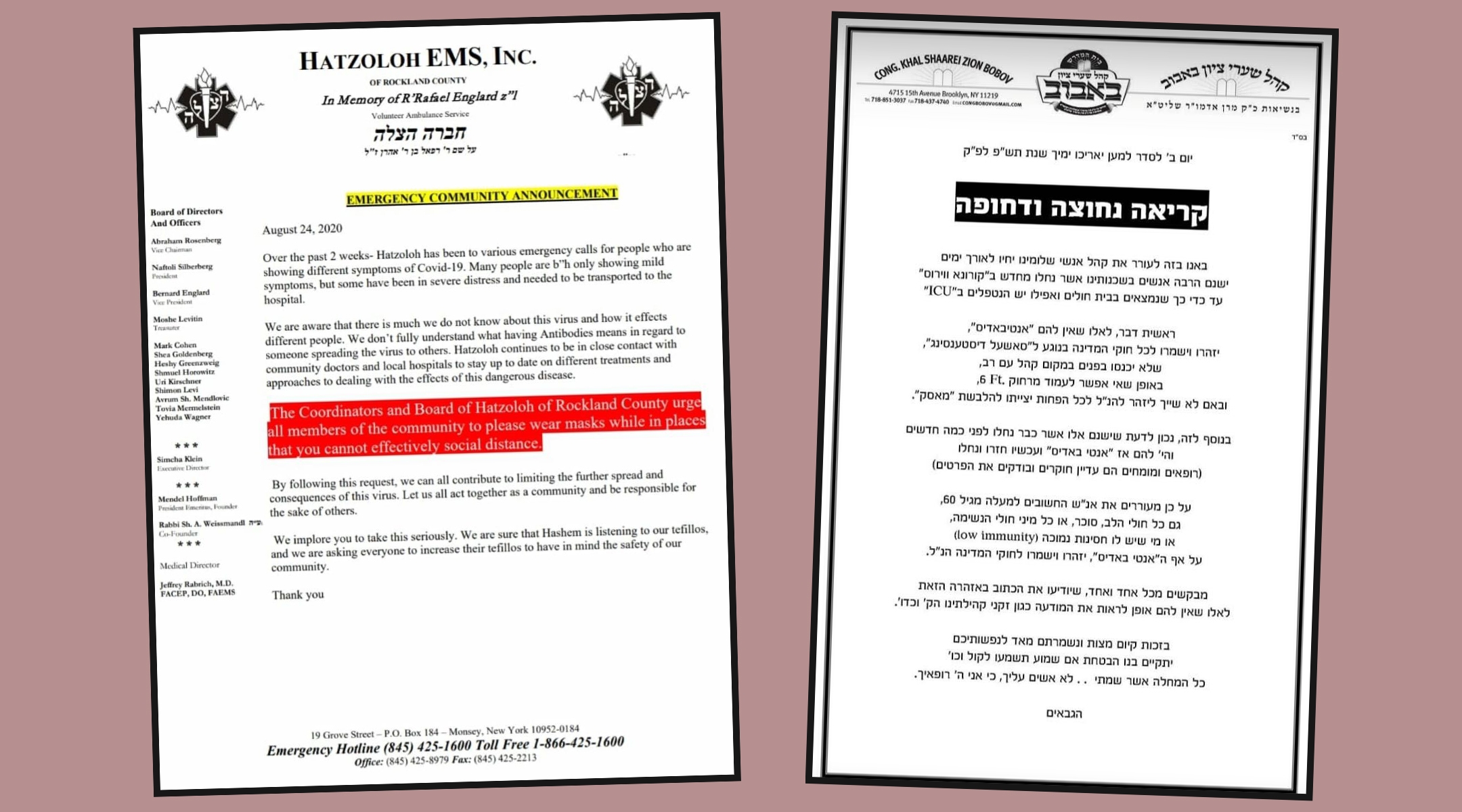 Am ambulance corps and a Brooklyn synagogue have warned of new cases of COVID-19 in local Orthodox communities. (Screenshots from WhatsApp)
Advertisement

(JTA) – With cases of COVID-19 rising over the last several weeks in Orthodox communities in the New York City area, a synagogue in Brooklyn and a Jewish ambulance group issued warnings for people to continue taking precautions against the virus.

Hatzoloh of Rockland County, which serves a number of large Orthodox communities in Monsey, New York, and the surrounding areas just north of New York City, said it had received a number of calls from people reporting COVID-like symptoms and requiring hospitalization.

“The Coordinators and Board of Hatzoloh of Rockland County urges all members of the community to please wear masks while in places that you cannot effectively social distance,” they wrote in a letter Monday.

Meanwhile, Congregation Khal Shaarei Zion Bobov, a Brooklyn synagogue of the Bobover Hasidic movement, warned the community that several people in the neighborhood had contracted the coronavirus, with some ending up in the intensive care unit. The notice, written in Hebrew, warned those who do not have antibodies or those who are older or have underlying health conditions to maintain social distancing or wear masks where distancing is not possible, practices that have not been common lately in the community.

The notice also mentioned cases of reinfection after several months. Local doctors in Orthodox communities in Brooklyn have seen cases of suspected reinfection, causing them to warn that those who were sick in the first wave of cases should not assume that they are safe. Those cases have been milder in their symptoms so far, the doctors have said, in keeping with what would be expected from a typical immune response.

The warnings come after an announcement last week by New York City Mayor Bill de Blasio of 16 new cases in the Brooklyn neighborhood of Borough Park, home to the city’s largest Hasidic community, with several of the cases connected to a large wedding. In other communities in the New York City area and down the East Coast, doctors and local rabbinical associations warn of worrying upticks in COVID cases that threaten the safe reopening of schools and in-person services on the High Holidays.

Several Orthodox communities were hit particularly hard by the virus earlier in the pandemic, with members of some even believing that their communities may have achieved some measure of herd immunity as a result. Even so, large numbers of people who have not contracted the virus and recovered still remain vulnerable.