This rabbi spent 4 months on a ventilator and endured 4 collapsed lungs from COVID-19. Now he’s recovering. 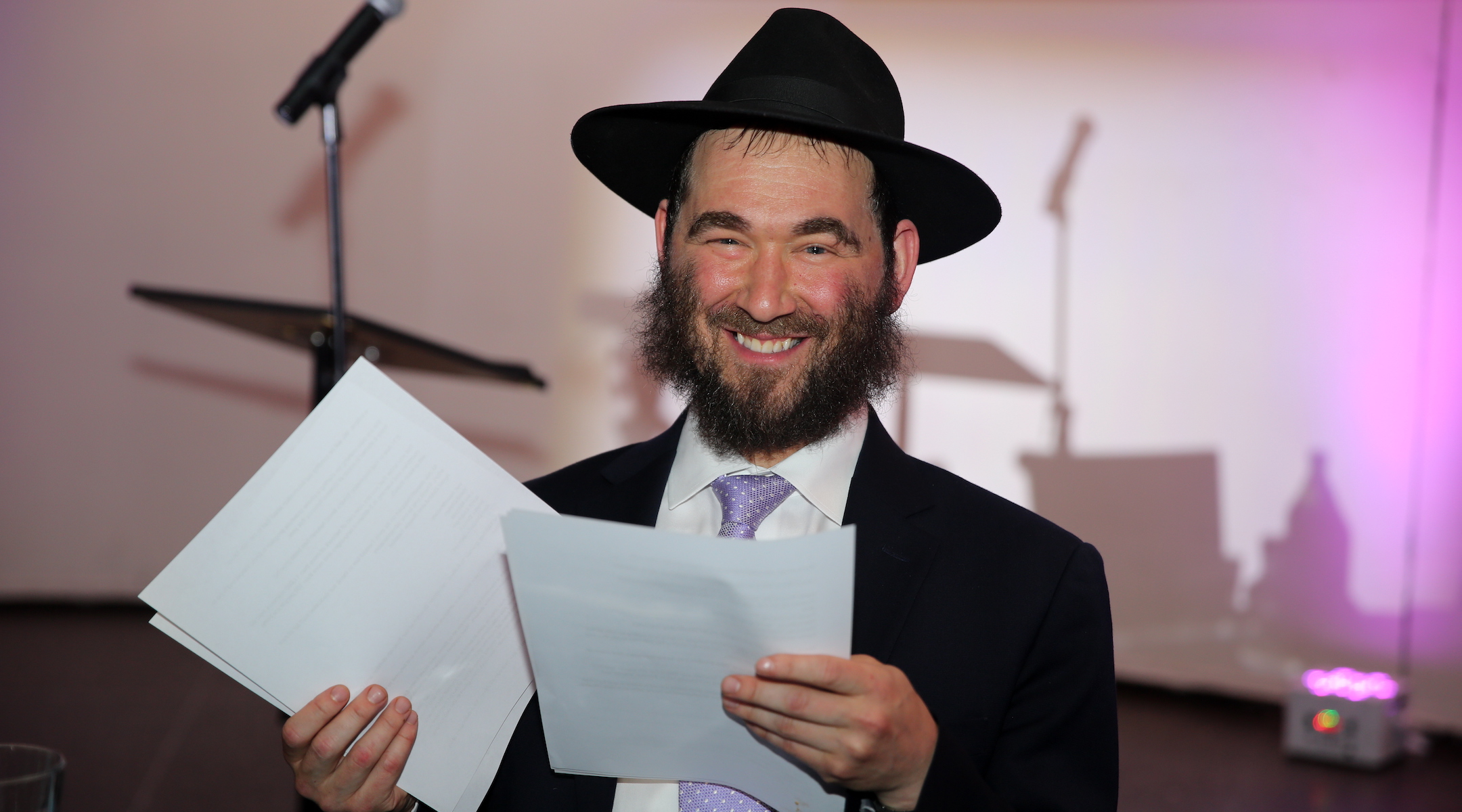 (JTA) – At a moment when the world could use a dose of hope, along comes Rabbi Yehuda “Yudi” Dukes.

In late March, Dukes was hospitalized in New York with COVID-19, a week after the otherwise healthy 38-year-old rabbi took ill at his Long Island home. Dukes spent a whopping four months on a ventilator, including nine weeks on an artificial lung machine. He endured four collapsed lungs, experienced a stroke and underwent a liver biopsy, among other challenges. He is believed to be among the longest hospitalized COVID-19 patients in the country.

And then he began to improve.

Earlier this summer, Dukes regained consciousness after having been in an induced coma for months. In late June, he began to mouth words. By early August, he was eating food again. And as of last week, he was breathing entirely on his own.

In a hopeful post on Facebook, his wife, Sarah, reported: “The procedure that Yudi had a couple of days ago to help seal the air leak in his lung was successful, thank G-d(!) and today Yudi’s 4th and final chest tube was removed! This was the final step needed before Yudi would be able to leave the ICU and begin rehab!!!”

Throughout the spring and summer, as Dukes endured a roller-coaster of advances and regressions in his condition, Sarah, a mental health specialist, posted updates on her husband’s condition to Facebook and Instagram. She charted his medical team’s heroic efforts to save him and encouraged people to pray and perform a mitzvah, a Jewish ritual commandment, on his behalf.

People from as far away as Berlin and Rwanda dusted off their tefillin, lit Shabbat candles or recited Psalms on Dukes’ behalf.  Even Brooklyn Borough President Eric Adams took note, declaring July 23 Yudi Dukes Day in Brooklyn and issuing a proclamation that hangs on the wall in the rabbi’s hospital room.

The response has been overwhelming, according to Rabbi Moshe Kotlarsky, vice chairman of Merkos L’lnyonei Chinuch, the educational arm of the Chabad Hasidic movement.

“He’s a very positive, focused, sincere, no-nonsense kind of guy,” Kotlarsky said. “The conscience of the office — in a good way.”

Dukes is the longtime director of the Jewish Learning Network, or JNet, a worldwide Chabad program that pairs people to study Judaism together. Since regaining consciousness, he has sought to find some spiritual significance in his ordeal.

“This has not been done to me,” Dukes told the Jewish Telegraphic Agency by phone from the medical intensive care unit at NYU’s Langone hospital. “It’s been done for me.”

“Yudi is able to see how everything specifically and the trauma in general is helping him grow in so many ways,” she wrote. “He told me today, ‘Every experience that I have been having, no matter how painful or negative it seems, is there to bring out the best in me and help me grow to be a better person. This trauma has been an opportunity for discovery.'”

Sarah began posting about Dukes’ condition from the day he was admitted to the hospital on March 30. Initially she posted to seek practical help for her family as well as prayers for her husband. But she soon realized that a community had formed that was providing strength and spiritual sustenance. Inspired by her posts, Dukes’ JNet colleagues launched a campaign, “Do a Mitzvah for Yudi.”

“The good deeds they were doing made me feel he was protected and safe,” Sarah told JTA.

On May 31, after Dukes experienced a setback and had to have his sedation increased, Sarah posted a video of herself sitting at the piano with her 12-year-old son Baruch playing “Once Again,” a melody they composed for him.

“The past couple of days have been a lot harder for me emotionally,” she wrote. “Seeing Yudi have a big setback is scary for me, and also very sad. I know he’s going to be ok in the end, and the nurses have been so reassuring, but I miss him so much. I haven’t been able to speak with him for over 2 months. Hearing my two year old son ask his father why he’s not talking back to him over the phone and that he wants him to sing to him completely broke me inside.”

Music has always been at the center of the Dukes’ relationship — and the couple’s children have picked up the score, writing and singing their own songs. Even as he lay unconscious, Sarah’s original compositions played in his hospital room. Some evenings, a nurse would hold up the phone to Dukes as Sarah played from their home.

As Sarah anticipates her husband’s homecoming, she plans to release a recording of “Triumph,” a song she began composing two years ago when her daughter was treated for a serious medical condition and has now completed.

“This is for Yudi,” she told JTA. “This is for our family. This is for everyone because everyone is fighting some sort of battle. But we get up every day, we get out, we do what we have to do. And everyone is triumphant.”