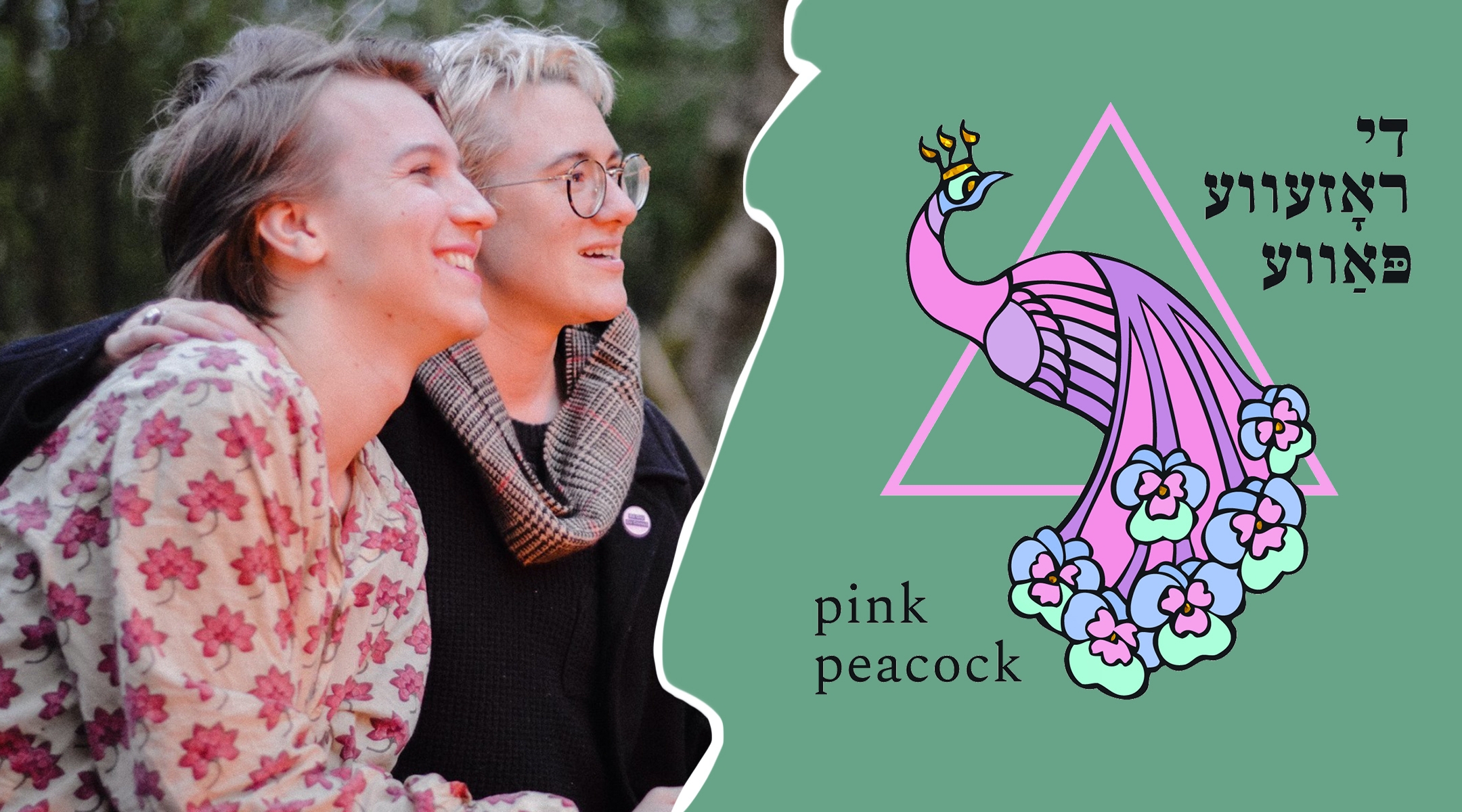 (JTA) — Govanhill, on the Southside ward of Glasgow, is perhaps the closest Scotland has to the interwar world of Yiddish-speaking Europe. With its rows of red-brick Romanian stores and Polish bars, it is the country’s most ethnically diverse neighborhood, also home to other Eastern European, Pakistani and Bangladeshi populations.

The area is about to welcome a notable new Jewish neighbor: a queer-friendly, Yiddish-speaking kosher cafe operated by Jewish self-described anarchists. At the Pink Peacock, customers will “pay what they can.”

“We’re filling a gap and showing them that there is a Jewish space where you can be loudly queer and you’re welcome,” said Morgan Holleb, 31, who along with co-founder Joe Isaac, 21, hopes the eatery will become a center of Yiddish and LGBTQ activity in Glasgow.

Customers will be told the “break even price” of the food that they have ordered, “and they can pay either side of that all the way down to zero.”

“The idea of the project is to bring food and community to people in an accessible and affordable way,” said Morgan, a Chicago native who moved to Scotland’s largest city two years ago.

Holleb and Isaac are in the process of negotiating a lease and say they are hoping to open the cafe “between the Jewish New Year and the goyish New Year.”

The model that underpins the cafe has already been given a test drive: The Pink Peacock set up shop in recent months delivering food parcels to the local community from the pair’s home kitchen, which was turned into an industrial-scale production line for pastries and deep-fried foods. Holleb and Isaac delivered weekly “bread baskets” containing bagels and challah, along with traditional Ashkenazi fare such as knishes, to some 40 to 50 Glasgow households in need because of the coronavirus pandemic. Most of them were not Jewish. 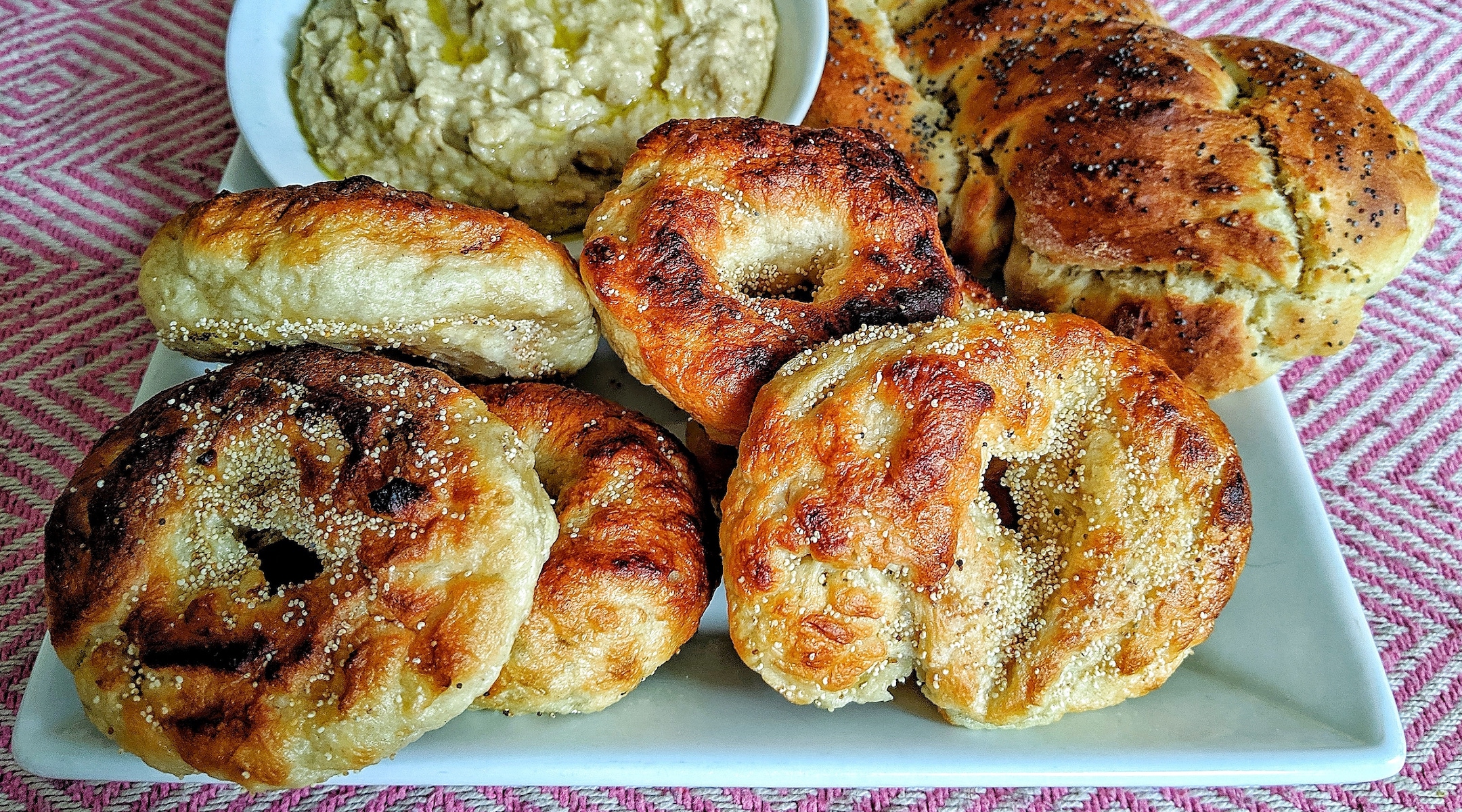 A sampling of Pink Peacock bagels, hummus and challah – or in Yiddish, baygls, khumus and khale. (Pink Peacock)

When the cafe officially opens, it will offer the vegan, kosher and halal-certified staples of the Ashkenazi cookbook, as well as dishes that Holleb and Isaac say have been “forgotten” in the greasy pages of Jewish culinary history, from outside the “classic” Polish and Belarusian and Ukrainian cuisines.

Amid the clattering of pots and pans, the founders plan to host lectures on revolutionary and social themes.

“Hopefully,” said Holleb, who is transgender and a published author on LGBTQ+ issues, “people will hear that we’re anarchists and say, ‘Oh, this is anarchism, I thought anarchism meant chaos and smashing windows.’”

The Pink Peacock, however, isn’t just a revolutionary concept, it’s also a pioneering initiative in the Scottish Jewish landscape — its first physical space for Yiddish in decades. The owners are incorporating Yiddish into the cafe website and want the restaurant to “be a space for Yiddish learning,” equipped with Yiddish dictionaries and full of lectures, “so people can practice their Yiddish.”

They are also spearheading the establishment of a “Yiddish summer program” — details to be determined — for learners and Yiddishists.

The cafe already has a strong social media presence and a bilingual website fronted by an icon of a brightly hand-drawn bird. Holleb and Isaac are tweeting in Yiddish (somewhat of a rarity among mainstream Yiddish institutions, which they condemn as “conservative” in their approach to the language), and interacting and learning from the ways that some Hasidic accounts online are adapting the language for the social media age. 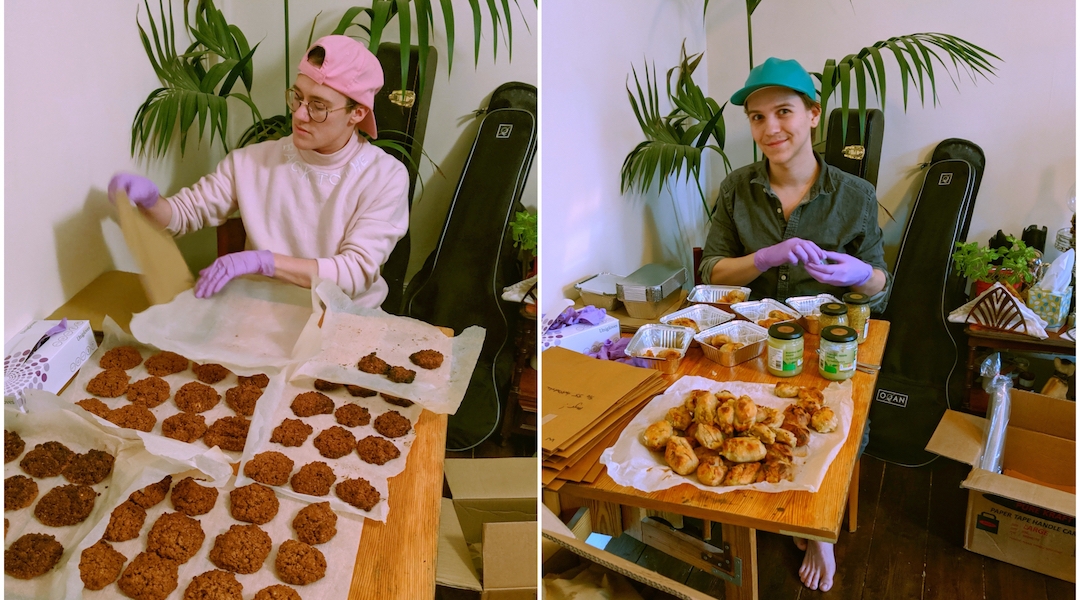 Scotland, and Glasgow’s Southside in particular, has a unique place in Yiddish history. As Jewish immigrants from Eastern Europe arrived in the country’s industrial heartlands from the late 19th century through the 1920s, enmeshed in networks that brought timber, iron and coal from the Russian Baltic, they brought Yiddish with them.

For a century, Scotland’s central belt was home to a unique Yiddish hybrid and the only Jewish “dialect” indigenous to Britain: Scots-Yiddish, which formed as the language merged and mixed with Scots, the dialect spoken by millions across lowland Scotland and Northern Ireland.

Holleb and Isaac are also giving a nod to this unique Yiddish past.

“I think that just by being in Scotland and doing Yiddish, we will make Scots-Yiddish,” Holleb said. “It is important to us that the Yiddish we do isn’t just preservation — we want to use and speak Yiddish, and if it is used in Scotland, we will say Scottish words.”

For example, they are adopting a variant of “Glasgow” that differs from the city’s typical Yiddish spelling, preferring one derived from Scots. From there, the hope is that the Pink Peacock will also become a space for speakers of languages like Scots, Romani and other Jewish minority languages like Ladino and Judeo-Arabic.

“We are building a minority language community,” Isaac said. “Our focus here is on Yiddish as the main language, but we are making efforts to and hope to host all sorts of different languages.”

Yiddish is spoken by about 30,000 people in Britain, nearly all from the growing Hasidic community. In Scotland, which lacks any large Hasidic community, Yiddish has been effectively dead for years. Today, the closest Yiddish-speaking center to Glasgow is the yeshiva town of Gateshead, 150 miles south in England.

“There’s a need for Yiddish,” Holleb said. “There is hardly any Yiddish activity at all in the U.K., and most of it is seen as being academic and stuffy, or just inaccessible.” 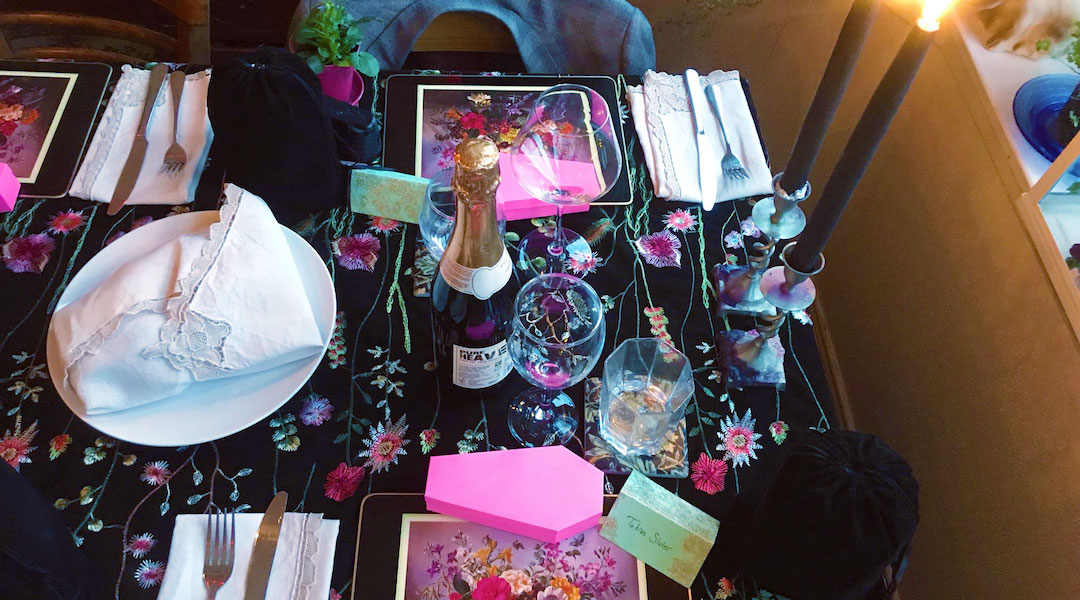 Holleb and Isaac aren’t alone: From New York to London to Sydney, a small number of young left-wing Jews have been reclaiming Yiddish as an act of political expression.

“The language is being rediscovered by young Jews,” Holleb said. “For me, it was a de-assimilation exercise — as Jews, we don’t stand to gain very much from assimilation and we stand to lose our culture, and I don’t want to do that.

“It has become obvious that being actively Jewish, whatever that means for people, is an act of anti-fascist resistance in and of itself … It feels powerful to say ‘mir zaynen do’ — we are here, and still speaking Yiddish.”

Holleb and Isaac said they aren’t interested in Hebrew because it was too bound up with the nation-building project of Israel, a country whose policies they disagree with. They also think that Yiddish is more secular and multicultural because it incorporates elements from other languages in countries where Jews settled.

“Yiddish is perceived as being an antithesis to Hebrew and to Zionism,” Holleb said, “especially for anti-Zionist Jews, or Jews who are critical of the Israeli state. Yiddish is a way of connecting with a Jewish language that isn’t modern Hebrew. There isn’t Yiddish nationhood. It is a diasporic language.” 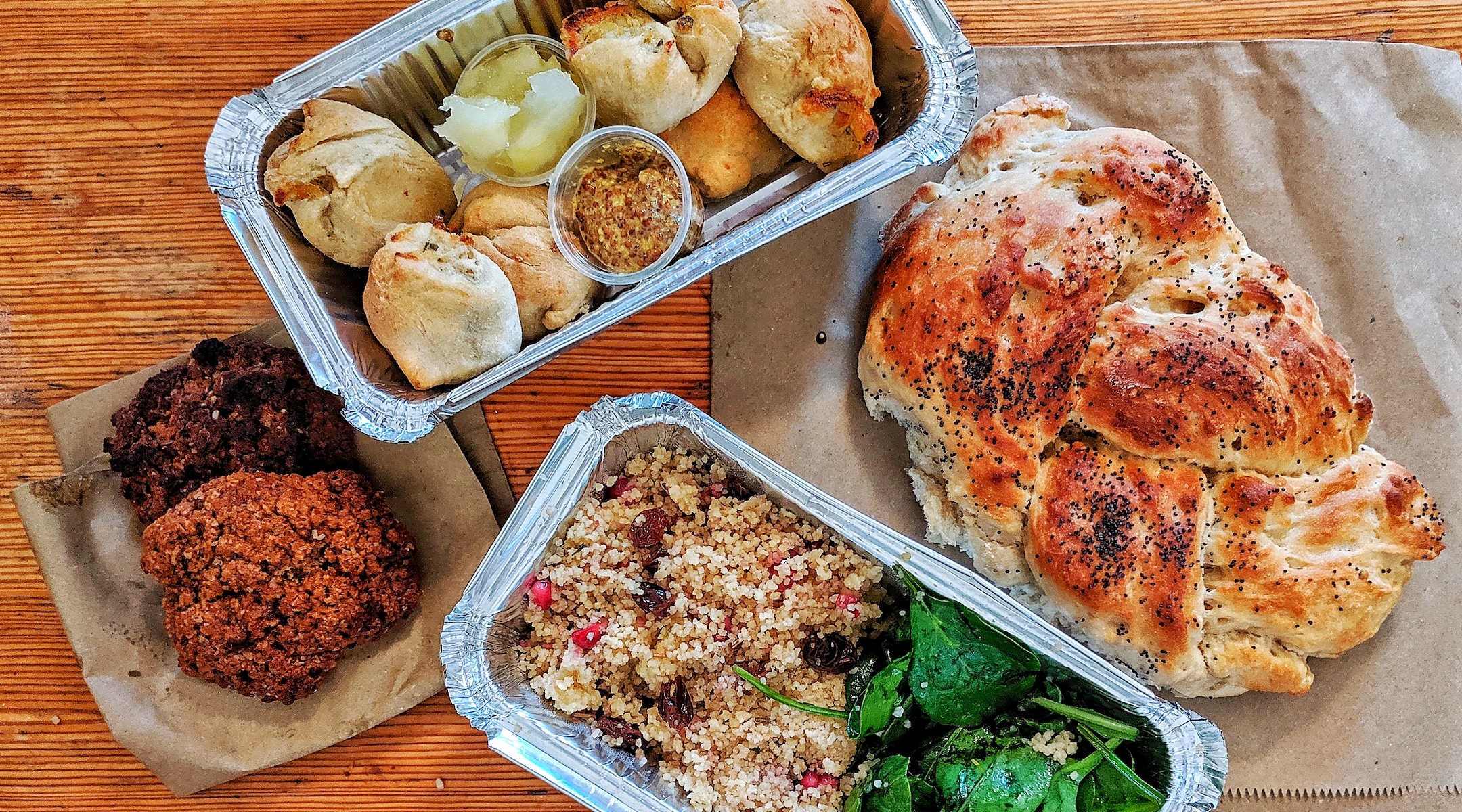 A takeout order of knishes, challah (which they call “khale,” the Yiddish spelling), couscous and cookies. (Pink Peacock)

Holleb and Isaac have been active among left-wing Jewish collectives in Scotland, and despite being atheists, have been involved in Irn-Ju, a congregation that hosts synagogue services in the homes of its members, many of whom are from the LGBTQ community.

By providing their website and online resources bilingually, the pair add, they hope to be able to help “Yiddish-native speakers” – mainly Hasidim – “who are queer and are unlikely to have any resource to help them understand or deal with that.”

“In our Yiddish, we have made an effort to be legible to Hasidim, but they speak a different dialect,” Holleb said. “Our Yiddish is more academic because that is how we’ve learnt.”

The two have had a “mixed” relationship with Glasgow’s established Jewish community. When they and the leadership of the Irn-Ju campaigned to save a disused local synagogue from demolition, the community claimed that the group was reopening old disputes that had been settled years earlier. The community had sold the building to fund other things, and Irn-Ju didn’t have a plan or the funding to run a physical synagogue.

Nonetheless, Holleb and Isaac hope to attract at least some of the city’s 9,000 Jews and stress that the Pink Peacock concept is not “divisive.” They just believe that they “are reaching a Jewish community that other groups are not.”

“Even if someone despises all our politics,” Isaac said, “they can enjoy the food we’re providing.”