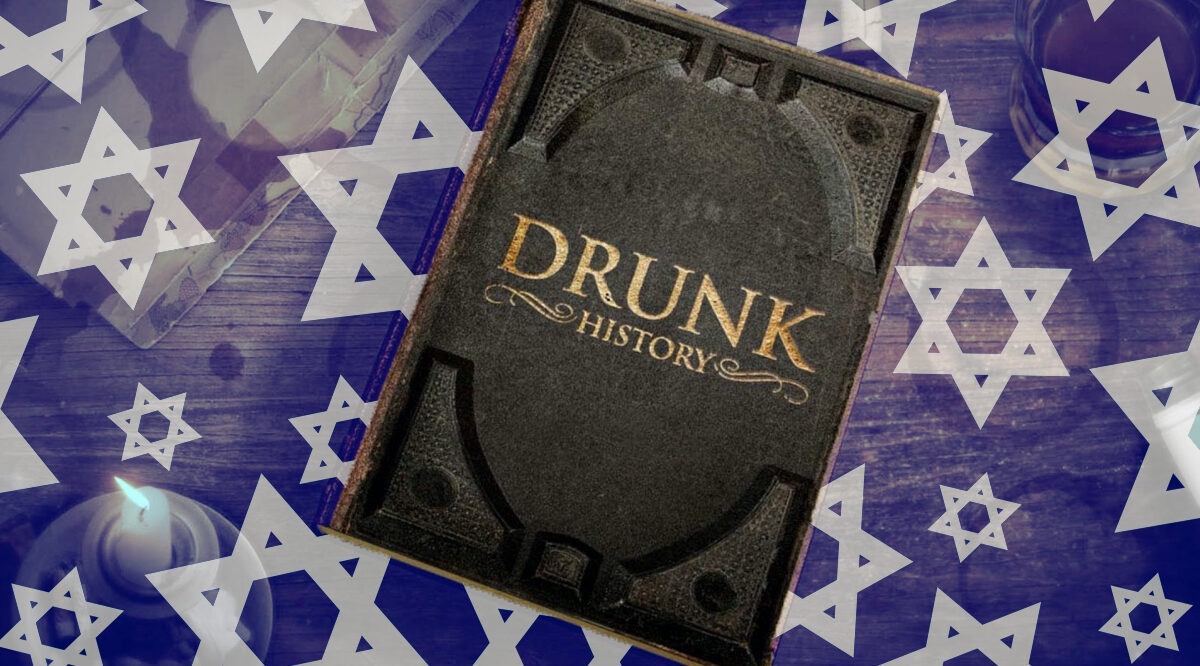 A copy of ‘Drunk History’ on a background of Jewish stars. (Getty Images / Emily Burack for Alma)
Advertisement

Drunk History, the beloved Comedy Central show where comedians get drunk and tell a story from history, was just canceled after six seasons. In honor of the show’s fantastic run, we decided to highlight 10 of our favorite Jewish histories to grace the screen.

1. Rachel Bloom on the capture of Adolf Eichmann

What’s so great about Rachel Bloom’s re-telling in Drunk History is, honestly, everything. A Jewish comedian telling the story of the capture of Eichmann? We can’t get enough.

As Bloom recounts, Issar Harel, head of Mossad, told David Ben-Gurion, Israel’s Prime Minister, that they needed to go after Adolf Eichmann because, as Bloom says, “Let’s nail this fucking motherfucker to the wall like a fucking moose who’s been hunted.” Other great lines include, “The Eichmann kids are fucking stupid,” and, “Argentina is like, really bad about extraditing Nazis. They, like, don’t give a shit for some reason. I don’t know why. I don’t know why!” and, “We’re gonna have to milk-carton Adolf Eichmann!”

Tiffany Haddish tells the story of Rose Valland, an art curator who helped take down the Nazis in Paris. Her imitation of Germans will particularly make you cry tears of laughter. (Just a bunch of harsh syllables all together.) Also, she calls Herman Göring “so ratchet.” Haddish tells the story of how Valland saved over 60,000 pieces of art looted by the Nazis. Overall, just fantastic.

Fun fact: Drunk History host Derek Walters explained that Haddish wanted to tell the story of the history of the weave, but was drawn to Valland’s story because of her own Jewish heritage. Walters said Haddish was an “unbelievable” storyteller because “she told the story and gave it her own take. Who would ever imagine that story would end with Tupac and Hitler together? She’s the best storyteller. It’s hard to smile learning about Nazis, and it’s hard not to smile throughout that whole story because it’s her.”

Katie Nolan tells the story of Gloria Steinem (played by Abbi Jacobson)!! Specifically, the story of Steinem going undercover at a Playboy Club to expose its sexist work environment. Initially, Gloria said no, but her editor said, “This is your chance to call out Hugh Hefner on his goddamn bullshit.” Steinem’s essay, “A Bunny’s Tale,” which was published in 1963, remains important and relevant to this day.

Brendon Walsh tells the story of Bugsy Siegel, a famous Jewish mobster, and Meyer Lansky, known as “the Mob’s Accountant.” Siegel ends up in Las Vegas building casinos. “Him and some of his mob buddies go to Vegas. Hey, we’re mob guys. So… hit the bricks or get beat up…”

The best line is when Walsh, bluntly, goes “so they’re doing murders.”

Judith “Judy” Heumann is a famous Jewish disability rights advocate, and it was so exciting to watch her story on the (drunk) scene, played by wheelchair-bound actress Ali Stroker. Suzi Barrett specifically focuses on the section 504 sit-in. When, as Barrett drunkenly explains, disability activists proclaimed: “What the fucking fuck, make us equal! We have rights! We are citizens [fart noise]!”

Yes, Louis Armstrong was Jewish… sorta! Armstrong was unofficially adopted by a family of Jewish immigrants from Lithuania who had a junk hauling business in Louisiana. And this Daryl Johnson episode talks about Armstrong growing up in Louisiana, and the relationship he had with this Jewish family. We love Johnson’s attempt at a Jewish lullaby: We’re Jewish, and we looove it.

We could only find this clip on Facebook, but obviously the story of Hedy Lamarr — Jewish actress and inventor — has to make our top 10 list. It’s a fabulous retelling of inventing the patent for the technology that will become the basis of WiFi and donating it to the Navy.

In 2010, Edie Windsor, a Jewish lesbian, successfully sued the United States for denying marriage equality to same-sex couples. Alison Rich tells the overview of Edie’s life with her partner, then wife, Thea Spyer. In 2009, when Thea dies, the U.S. Government doesn’t recognize Edie as Thea’s wife. Edie gets mad, and as Alison narrates, “I’m gonna call a bunch of lawyers. I’m gonna call a bunch of gay rights activists.”

The Defense of Marriage Act (DOMA) allowed states to refuse to acknowledge same-sex marriages as legally binding. Before the Supreme Court, Edie says (as Alison narrates), “If my love isn’t real, no fucking love is real. We were together for so long. Our love deserves to be recognized.” Thanks to Windsor, DOMA was declared unconstitutional!

We couldn’t find the entire clip of this, but anything talking about Jewish scientist Carl Sagan we are here for!

10. Anais Fairweather on A League of Their Own

Okay, the story of All-American Girls Professional Baseball League isn’t exactly Jewish, but one of the women in the league — Thelma “Tiby” Eisen — was famously so. We love a Jewish-adjacent story.