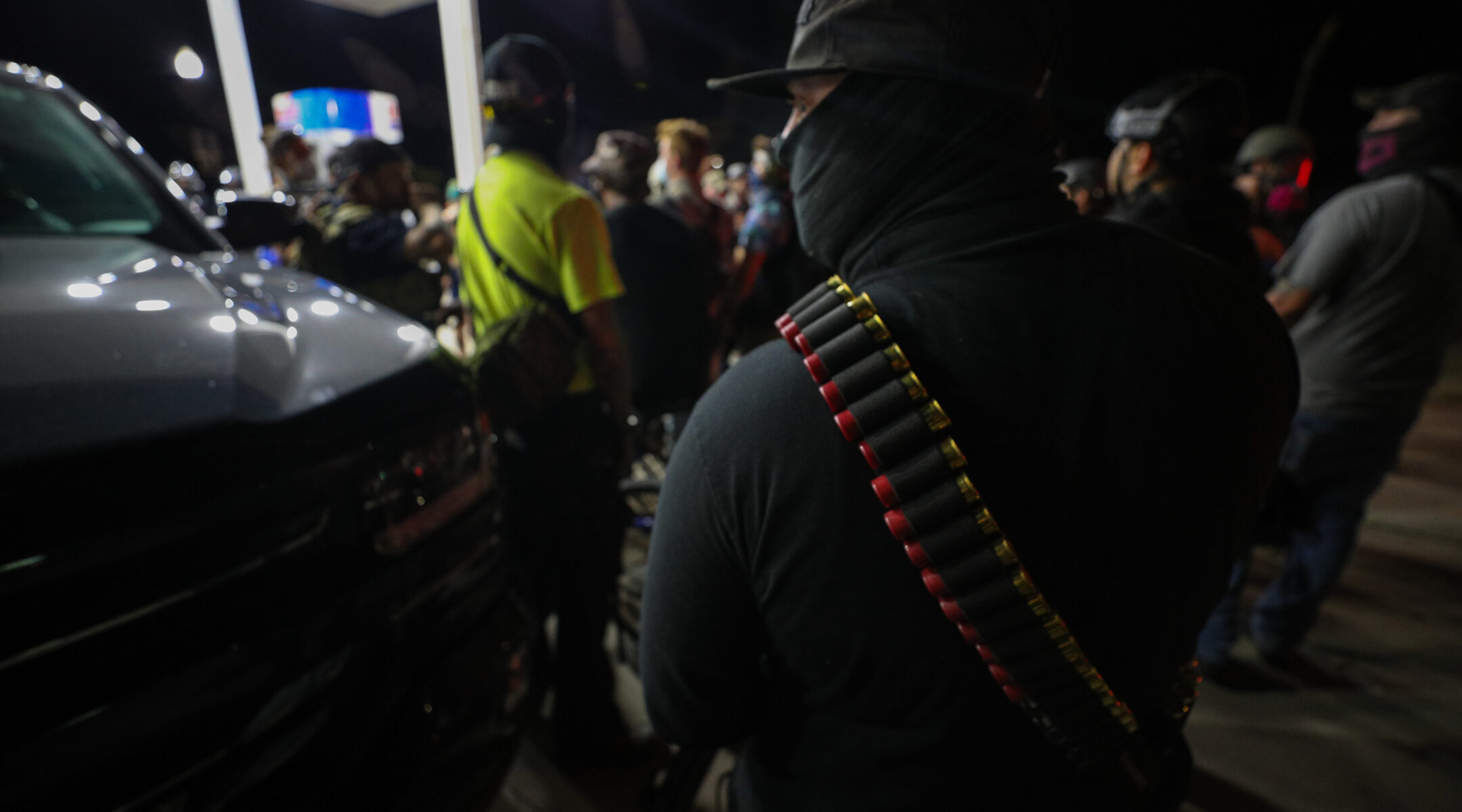 Armed civilians stand in the streets of Kenosha, Wis., with the stated goal of protecting the area from Black Lives Matter protesters, Aug. 25, 2020. (Tayfun Coskun/Anadolu Agency via Getty Images)
Advertisement

(JTA) — Last week, a researcher who focuses on extremism said he was concerned that the fatal shooting in Kenosha, Wisconsin, could start a trend of similar deadly incidents at protests.

Then, three days later, something like it happened in Portland, Oregon: One man was killed following a night of clashes between supporters of President Donald Trump and counterprotesters.

The alleged Kenosha shooter, Kyle Rittenhouse, 17, did not appear to be linked to any far-right organizations when he traveled there with an AR-15 rifle and killed two people on Aug. 25 amid ongoing protests sparked by the police shooting of an unarmed Black man, Jacob Blake.

Multiple videos capture an incident in which Rittenhouse, of Illinois, appears to trip while running down a street and then shoots two people who are converging on him. Rittenhouse has been arrested and charged with first-degree murder in the deaths of Anthony Huber and Joseph Rosenbaum.

The notion of a teenager crossing state lines with a semiautomatic rifle in hand to uphold public order shocked many Americans. But to Alex Friedfeld, an investigative researcher at the Anti-Defamation League’s Center on Extremism, it was the latest sign of a disturbing trend — armed men showing up to scenes of unrest and, without training or a mandate, acting as self-appointed guardians of law and order.

That, Friedfeld says, isn’t that different from the Portland shooting. Police have not identified a suspected shooter or the victim there, though the latter has been identified as wearing a hat with the insignia of Patriot Prayer, which the ADL calls a far-right group.

The Anti-Defamation League is perhaps best known for its efforts to document and combat anti-Semitism, but its analysts actually monitor many interrelated forms of extremism. That’s why Friedfeld and his colleagues at the ADL and other anti-extremism groups have been closely monitoring for months as Black Lives Matter protests have swept the country. And with tensions sure to rise as the November presidential election nears, Friedfeld worries that others may follow Rittenhouse’s example.

The Jewish Telegraphic Agency spoke with Friedfeld about the Kenosha shooting, what it suggests about extremism in America and how the rising militia movement intersects with threats to Jews. Following the Portland shooting, JTA spoke with Friedfeld again about how the two shootings are related. That question-and-answer is appended at the end of this interview, which has been edited for length and clarity.

JTA: What are your reactions to the Kenosha killings and the circumstances surrounding them?

Friedfeld: What happened on Tuesday night was something that we have been kind of concerned about over the last few months, particularly since the outbreak of the Black Lives Matter movement. Since that point, you know, we have seen what’s essentially armed vigilantes.

Sometimes they form up as more formalized groups, but often it’s just armed individuals or a few guys going out and linking up with other people, without a mandate or any certification or qualifications for this moment. They are tasking themselves with the responsibility of what they believe is keeping the people and their local communities safe.

But again, they’re taking it upon themselves. They are not police officers. There is no sense that they have the training to handle this right.

And so you’ve got these armed individuals who are inserting themselves into these very tense situations. And it creates the possibility that if things go south, if there is an escalation, that they’ll find themselves outmatched or unprepared for the moment. And that’s when bad things happen, especially when they’re carrying firearms.

No one should have let a 17-year-old kid patrol the streets while there are protests going on. He was in a position where he could actually kill people. And that should never have happened.

What’s the connection between Rittenhouse and the far-right militias and other extremist groups you research?

We have been tracking vigilante groups and militias that have been showing up at these protests across the country to provide security for local residents and their businesses.

And the Kenosha Guard [an independent militia that patrolled the protests on the night of the shooting] is one of these types of groups. They’re not linked with the other ones, but it’s that same type of local security watch that we’re seeing rise to prominence in the wake of the Black Lives Matter movement.

They put up this call basically saying we need to protect our city from thugs, from looters, from rioters. What these calls do is they normalize this idea that it is OK and proper for armed vigilantes to patrol the streets of America’s towns and cities in order to protect people and property.

On their pages, you can find these anti-Black Lives Matter sentiments. And that’s pretty common among these vigilante groups. They will go out in public and say that they are there to protect all residents and to protect all businesses, and they just want to protect people’s right to protest. But when you actually look at the words that they say on their pages, you often find very staunchly anti-Black Lives Matter rhetoric.

In general, when you look at groups like the Kenosha Guard, do they tend to affiliate with the same anti-government extremist ideologies that other right-wing militias ascribe to?

These groups are more vulnerable to those more classic militia movement conspiracies because they fit into that network. The mindset basically is that there is someone out there that wants to destroy America, and that they are the ones that have to resist it.

Does that lead to an anti-Semitic conspiracy theory, that the ones who want to destroy America are the Jews?

I don’t usually see overt anti-Semitism in terms of someone saying the Jews are behind it, but you do see [references to Jewish financier and progressive philanthropist] George Soros. I don’t even know if you call it a dog whistle at that point. But it’s that coded language, George Soros being the most popular one. I mean, how many times over the last few months have we seen these conspiracies that George Soros is paying for Black Lives Matter?

The implicit message there is that he is paying to cause unrest to destroy American cities and towns. So you don’t usually see overt anti-Semitism in the way that you would among white supremacists. But there is absolutely that coded language, particularly when it comes to conspiracies about George Soros and folks like that, that tries to pin the blame on them.

This idea that people feel comfortable to bring a gun into public [space], with all the messaging and inherent threats that come along with that, that’s an act of extremism.

What are your thoughts on the way the Kenosha police reacted to the shooting?

I can’t speak to the Kenosha police. They’re still investigating.

What I can say though is the fact that the police did not immediately try and get rid of these guys, push these guys off the street or just say “You can stay here, but put your guns away,” that is concerning.

They weren’t breaking any laws by carrying the guns. But if you have a chaotic environment, I would think you would want to reduce the amount of guns.

Are you worried about shootings like this one becoming a trend?

The environment and conditions that made this shooting possible still exist. Nothing has changed to prevent this from happening anywhere else. So that’s not to say that another shooting like this will occur. But those underlying conditions are still there. It is certainly possible, as summer turns to fall, that we see another incident like this.

There was nothing particularly special about Kenosha that resulted in the shooting happening there. As the election nears and people get even more heated and the stakes get even higher, these events [could] attract more hotheads, attract more of this extremist element.

It’s not like in the wake of this we have seen guards say, Oh, wow, we need to stand down or something like that. Or we need to change the way we do these things to make sure that the people who are standing with us, we know who they are, we know that they are trained, or whatever. Or that police have come out and said, you know, we are not going to let armed men stand in the streets anymore. No one has responded like that.

The potential for this to happen still exists until we as a society take those steps, to say no more armed men in the streets that are not law enforcement.

How have militias responded to this?

The Kenosha Guard tried to distance themselves. I think, in general, a bunch [of militias] have come to his defense and said that he was in the right, that he was being attacked and he acted in self-defense.

Are these groups’ numbers on the rise since the start of recent Black Lives Matter protests?

That’s where we started to see a lot of these groups starting to form. They were formed in response to BLM. Their reason for being is usually protecting the city from Black Lives Matter protesters and antifa.

What this incident revealed is just how deadly the stakes can be by participating in these events. I think this incident revealed the danger that exists when you have a bunch of armed men standing around with little training in a situation that they are not prepared for. And firearms make that toxic mix even deadlier.

I think this is another example of what we’ve been witnessing over the course of the summer, which is the rise in street violence. Militias are this environmental problem of there is this increasing amount of street violence that can affect anybody.

We’re witnessing an increasing politicization of this violence. Rather than standing together as protesters and saying we will not condone the use of violence, people are blaming the other side for what happened. Rather than condemning the cycle, they’re perpetuating it.

When you view everything though the lens of almost-life-or-death struggles, committing an act of violence no longer seems as unreasonable.