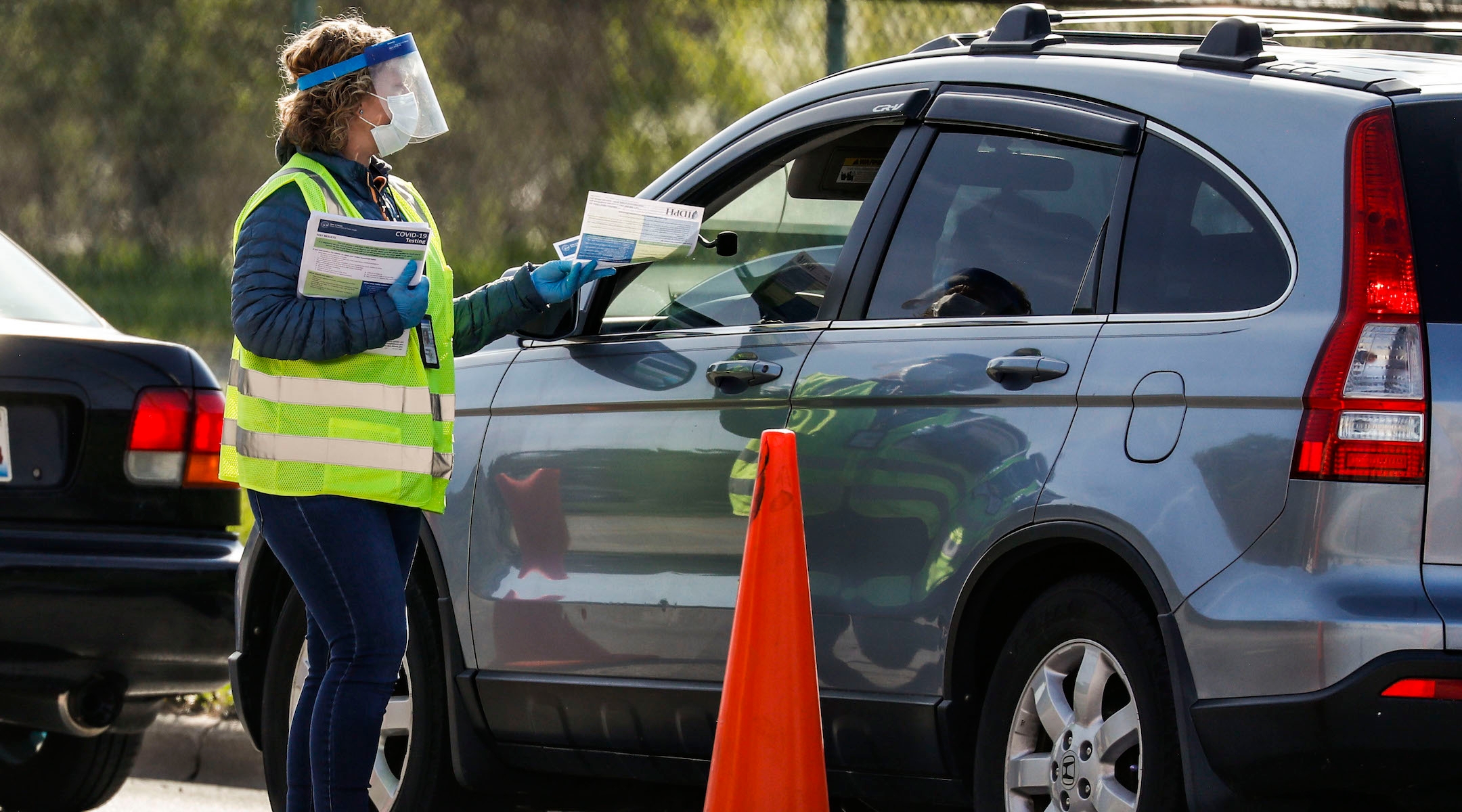 A health care worker hands out testing information to people waiting at a drive-through COVID-19 testing site in Chicago, May 6, 2020. (Joel Lerner/Xinhua via Getty)
Advertisement

(JTA) – As stores and synagogues began reopening in Chicago in June, Manya Treece, a social worker and mother, wanted to know whether it was safe for her to resume some of her normal activities, like letting her kids have play dates.

As someone with a higher risk of serious illness from COVID, she “didn’t want to live in a bunker” until a vaccine came out, she said. But she also didn’t want to resume her regular activities if her community, in the city’s northern suburbs, was a hotbed of infections.

That was when Treece decided to take action herself, devising a contact tracing system by and for Chicago’s Orthodox Jews tailored for the community’s particular needs. Community Covid Counter launched last week.

Those needs, she realized, included making sure communications came from within the community.

“You have to have someone they trust, like an influencer, just delivering the message,” she recalled the expert telling her, citing the Holocaust as one reason that Orthodox Jews are fearful of government interference and overreach.

“At that point, I was like well maybe if someone is calling them from the community to figure out how to suppress the infection, then maybe they can also say well we can trust this process and it can also be encouragement from within the community.”

The strategy behind Community Covid Counter is simple: Community members who have received a confirmed COVID diagnosis fill out an online questionnaire providing information about any Jewish communal events — including weddings, bar mitzvahs and synagogue services — they attended beginning two days before their first symptom until they received their positive test result.

Volunteers then reach out to other community members who attended the same events, generally using a guest list from the hosts, to let them know that someone at the event tested positive for COVID and to determine, based on their behavior there, whether they should quarantine or get a COVID test.

The approach reflects the community’s needs in several ways. By acknowledging that large gatherings may be taking place — something that is being blamed for a resurgence of cases in New York City’s Orthodox communities right now — the project aims to open the door for public participation.

“It’s very important that if someone says I was simcha dancing and heavily breathing on someone without a mask, that you don’t go oh, my God, but say, then I think it would be really good for you to isolate until you can test and get some results,” Treece said.

And by not even recording the names of confirmed COVID cases in the community and keeping all personal information within a small group of trained volunteers from within the Orthodox community, the project is meant to stop the spread of COVID in a community whose trust in the health department and other government agencies can be particularly fraught. Volunteers who make calls to those who have had contact with people with COVID sign non-disclosure agreements and identify themselves with volunteer identification numbers rather than names.

“Parts of the Orthodox community that are very insular and have a very vivid memory of the Holocaust sense any government surveillance as a precursor to rounding people up,” Treece said. “There are concerns about government interference, what is the end goal and is this some sort of precursor to shutting down our way of life.”

The project is not sharing information with local health departments. But it has received approbations from the state health department as well as local departments in Skokie, a Chicago suburb with a large Orthodox community, and in Cook County. The local rabbinical association also praised the project in a letter, calling it a resource for local rabbis and synagogues.

“Any community projects that stimulate people to follow the recommendations would be very helpful,” Glatt wrote in an email. “This includes community tracing pilots, local shuls keeping track of cases in their membership, and removing the stigma of being positive or exposed.”

Much like Orthodox communities in New York and in Israel, Chicago’s Orthodox community was hit particularly hard at the beginning of the pandemic. The Zip code for West Ridge, a neighborhood that is home to a large Orthodox community, had the highest number of COVID cases in the state of Illinois in April, according to the local outlet Block Club Chicago.

As the pandemic wears on, Treece hopes the project can help prevent new outbreaks within her community and encourage people not to let down their guards on behaviors like mask wearing and social distancing.

“We were hit really hard and I think that’s made us relatively vigilant now,” Treece said. “But I think there are going to be cycles where everyone has quarantine fatigue.”