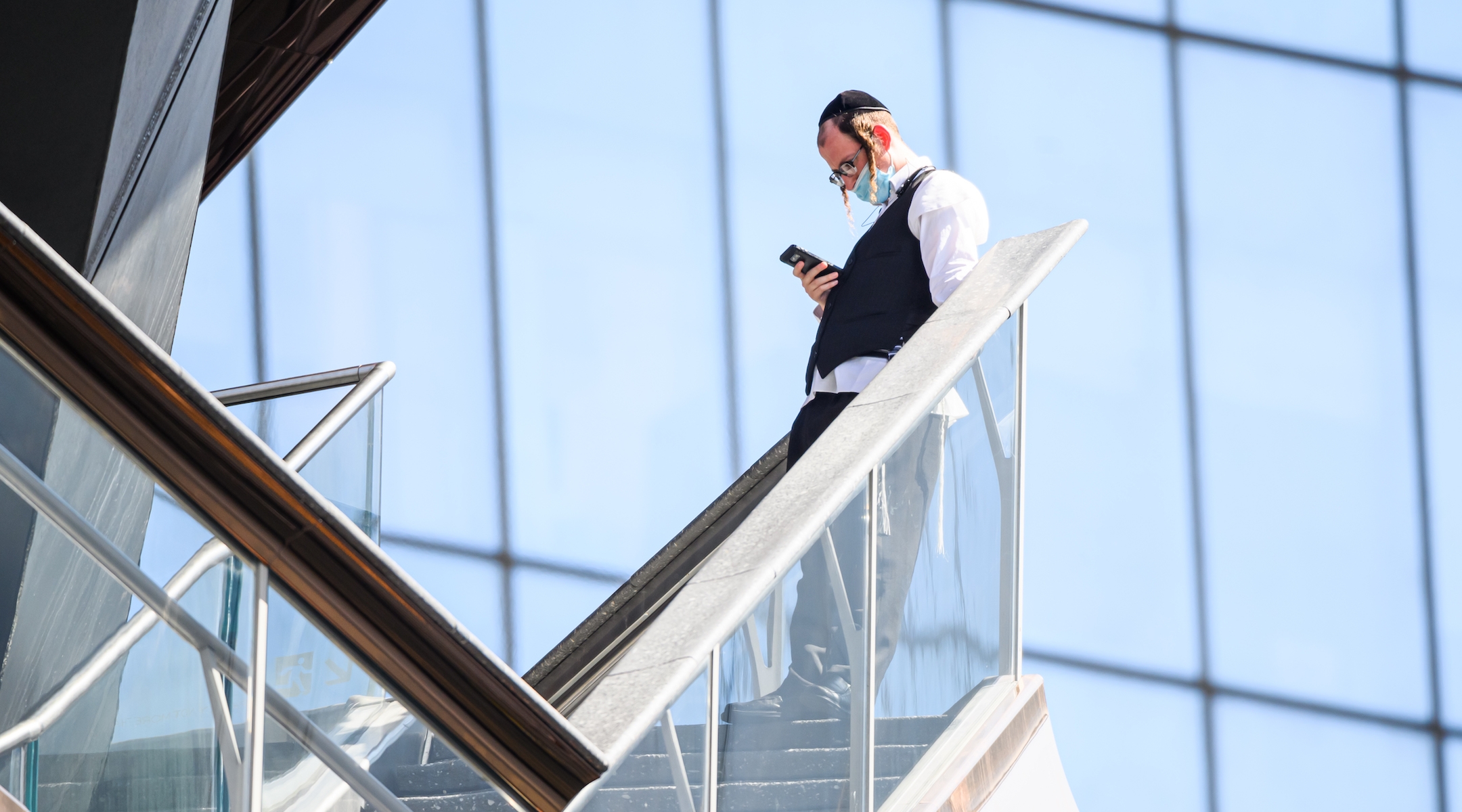 A Hasidic man wears a protective face mask while visiting The Vessel at the Hudson Yards on September 3, 2020 in New York City. (Noam Galai/Getty Images)
Advertisement

(JTA) – Rising fears about a second wave of coronavirus cases in New York City’s Orthodox communities appear to be justified, with the proportion of tests turning up cases of the disease more than four times the citywide rate in one heavily Orthodox neighborhood in newly released data from late August.

Meanwhile, rising cases in New Jersey, Baltimore and other areas with large Orthodox populations represent a threat to in-person instruction at local Jewish schools, many of which reopened last week, as well as plans for in-person services for the High Holidays.

And even as many Orthodox leaders are exhorting community members to follow public health recommendations to wear masks and avoid large gatherings, others say they intend to flout rules designed to stop the spread of the disease.

In a video taken at a wedding Sunday where unmasked guests appeared in the background, Borough Park activist and radio host Heshy Tischler vowed to attend a wedding every night no matter what restrictions Gov. Andrew Cuomo and New York City Mayor Bill de Blasio impose.

“Go drop dead, Cuomo, go drop dead, Mayor de Blasio,” said Tischler, who this summer cut the chains off local playgrounds alongside local Orthodox politicians in defiance of the mayor’s orders to keep playgrounds shut. “You’re not coming into my neighborhood, we’re going to do whatever we want.”

“The neighborhoods experiencing transmission were particularly hard hit in the worst weeks of the pandemic this past spring and we never want to return to those awful days,” Chokshi wrote.

According to charts prepared by the city’s health department, the spikes in positivity rates in New York City’s Orthodox Jewish neighborhoods appear to begin around Aug. 15.

That’s no coincidence, said Dr. Stuart Ditchek, a pediatrician in the Midwood neighborhood of Brooklyn. The period known as the three weeks, in which Orthodox Jews do not hold weddings, ended after Tisha B’av, a fast day, on July 30. The period between then and the start of the High Holidays is typically a time in which lots of weddings are held in Orthodox communities.

“Since Tisha B’av, when the weddings started, we started seeing a large number of cases,” said Ditchek.

Several wedding halls in Borough Park, the neighborhood with the largest Hasidic population in New York City and the highest positivity rate of the Orthodox Jewish neighborhoods, have been observed hosting large weddings without masks. According to the New York Post, one wedding hall placed paper in the windows and had guests enter through a side entrance, seemingly to avoid detection.

Many in the neighborhoods spent the summer operating under the assumption that widespread sickness in the spring had conferred some protections going forward. The resumption of weddings and often crowded in-person synagogue services without an accompanying uptick in disease early in the summer reinforced that sense of safety for many.

But the data from New York City’s health department is the latest in an increasingly dense series of warning signs.

One large Hasidic synagogue in Brooklyn noted many new cases in its Borough Park neighborhood, with some even being treated in the intensive care unit. Several Jewish day schools in Bergen County, New Jersey sent out notices in the first week of school informing parents of students who had been exposed to confirmed COVID patients and were sent home to quarantine.

In recent weeks as the cases have continued ticking upwards, a consensus has solidified around the idea that weddings are the primary cause of the new cases. While a typical Orthodox wedding might have more than 400 guests, social gatherings of more than 50 people are not currently permitted in New York State due to coronavirus restrictions.

Though a federal judge issued a temporary injunction blocking the enforcement of that rule in the cases of weddings after a couple challenged the rule as a violation of the First Amendment, New York officials are currently challenging the ruling.

Rabbinical councils in Baltimore, Maryland; Bergen County, New Jersey; and Cleveland, Ohio have all warned of the effects of large weddings. An open letter from 138 local Jewish doctors in Long Island’s Nassau County connected new local cases to large weddings and asked the community to trust in medical professionals.

Compounding the rise of large weddings is the fact that, in some communities, relatively few people attending them wear masks. While some doctors in these communities have noted a sense of fatigue from abiding by restrictions for the past six months, one of the doctors who organized the letter from Long Island physicians noted an anti-mask sentiment rising in some communities.

Ditchek is particularly concerned about his community in Midwood, where the health department noted a positivity rate of close to 4% in part of the neighborhood. A group of local doctors from the Syrian Jewish community, which is concentrated in Midwood and Deal, New Jersey, released a letter last week noting over 100 new infections in Deal last week.

“Because of the decrease in number and severity of cases, many of us have stopped keeping the precautions that caused the infections to decrease since the spring, believing that the threat is gone,” they wrote. “But as we continue to monitor the number of positive cases in our community, we have a dramatic increase in infections over the last two weeks; there have been over 100 new infections in Deal, NJ this week alone.”

Ditchek worried that those cases could seed new ones in Midwood as Brooklyn residents with summer homes in Deal return home for the school year.

“You can see why this is a conglomeration of events that’s really troubling to the health department,” said Ditchek.

Ditchek warned that the safe continued functioning of schools was the most important issue at stake in controlling the new infections in New York City’s Orthodox communities.

“I think if we are very vigilant, we can still put this thing to sleep,” said Ditchek. “If the cases continue to accelerate at the rate we’re seeing this week, it’s going to make for a very difficult time right around the Yom Tovim [holidays].”