This map shows the 20 congressional districts with the most Jews 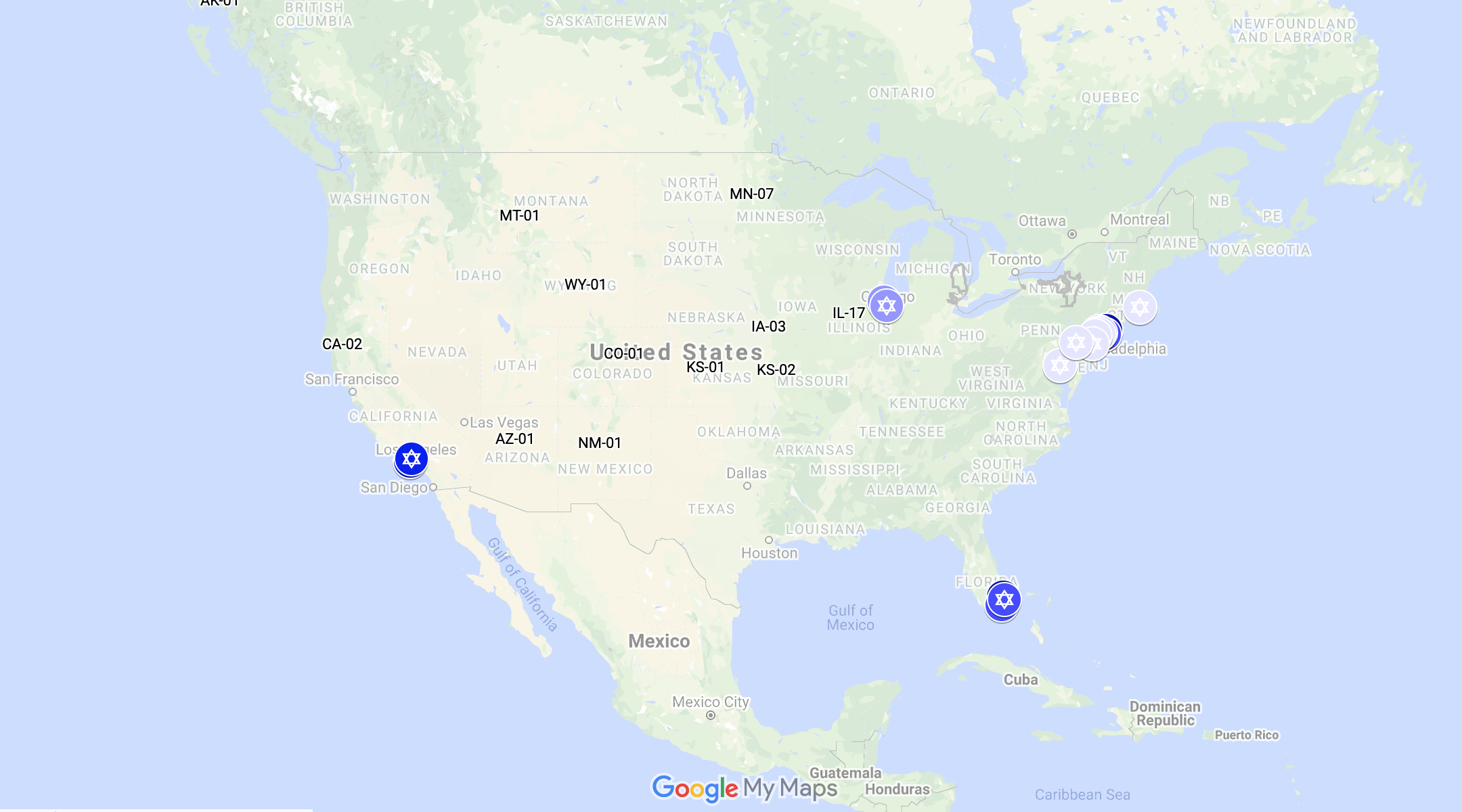 A map shows the 20 congressional districts with the most Jews. (Laura E. Adkins/JTA)
Advertisement

(JTA) — About one-third of American Jews live in just 20 of the country’s congressional districts. Nearly half of those districts are in New York, and all but one of them is represented by a Democrat.

Meanwhile, the district with the most Jews in the country is also the site of Mar-a-Lago, President Donald Trump’s Florida estate.

Those are among the findings from a recent study analyzing Jewish voting patterns. Key findings from the study, which was conducted by the Jewish Electorate Institute and the Steinhardt Social Research Institute at Brandeis University, were published online Aug. 25.

What’s new here is that the researchers were able to identify not only how Jews vote but where they cast their ballots. The study found that the majority of Jewish adults live in four states — New York, California, Florida and New Jersey.

“In all of the so-called battleground states, not only Florida but places like Pennsylvania and Ohio and Michigan, those are states where if something similar to 2016 happens in 2020, Jews are large enough in number in those states where they could make a difference,” said Leonard Saxe, director of the Steinhardt Social Research Institute.

Approximately one-third of Jewish adults, about 1.8 million, are concentrated in just 20 congressional districts among the 435 across the United States.

The district with the most Jewish voters, Florida’s 21st, is drawing a lot of attention this year for its race between two Jewish candidates, the Democratic incumbent Rep. Lois Frankel and Laura Loomer, an anti-Islam provocateur who won the Republican nomination and Trump’s endorsement. Loomer released an ad this week that used Holocaust imagery and Yiddish to attack Frankel as an opponent of Jewish interests.

The two adjacent districts down the South Florida coast, the 22nd and 23rd, also crack the top 20 for Jewish voters. Both are also represented by Jewish Democrats: Reps. Ted Deutch and Debbie Wasserman-Schultz, respectively.

Most of the other districts in the Jewish top 20 are in New York and New Jersey, including seven in New York City and two on suburban Long Island. The second-largest Jewish district overall, New York’s 10th on the Upper West Side of Manhattan, has 151,000 Jewish adults and is represented by longtime congressman Jerry Nadler, a Jewish Democrat. The other New York City districts cover large swaths of Manhattan, Brooklyn, Queens and Staten Island.

The lone district on the list represented by a Republican, Rep. Chris Smith, is New Jersey’s 4th, which includes the heavily Orthodox city of Lakewood. That district is about 10% Jewish, with 51,000 Jewish adults, according to the study.

The rest of the top 20 districts are in Los Angeles County and the suburbs of Chicago, Philadelphia, Baltimore and Boston.

Overall, eight of the top 20 Jewish districts are represented by Jews. Saxe said the list of the most Jewish districts is a key data point ahead of the 2020 census, which will likely lead to congressional redistricting.

“The concentration of Jews and whether that concentration is allowed to continue, whether it’s not, will be an important issue,” he said. “In those districts where Jews are 10% or more of the population, they’re also a very significant force in choosing members of Congress.”