This kid went viral with his rendition of ‘Avinu Malkeinu.’ We talked to his mom. 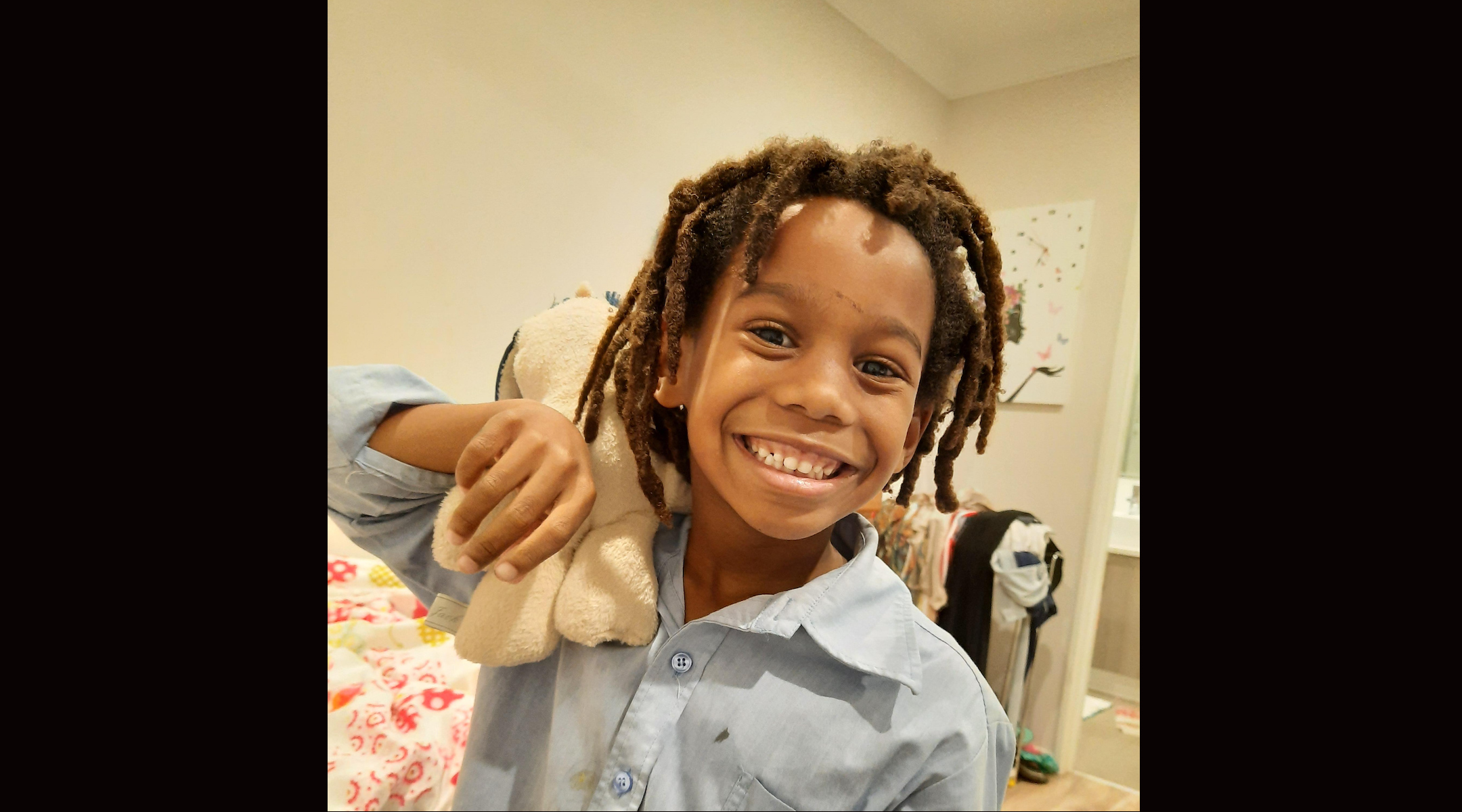 (JTA) — Nina Shapiro didn’t intend for the video of her son’s singing to go viral. The Perth, Australia, mother of two describes herself as “paranoid about my kids being on social media.”

But after the minute-long clip of 6-year-old Bibi belting an impassioned version of Avinu Malkeinu, the plaintive poem sung on Yom Kippur, mysteriously landed on Twitter and Facebook on Friday, Shapiro is wondering whether she might want to take another approach.

“I’m totally overwhelmed by the impact it’s had,” Shapiro told the Jewish Telegraphic Agency from her home in Western Australia. “It wasn’t built with an intention to be a performance.”

Exactly how the video got from a family text chain to thousands of Jewish viewers is unclear, but there’s no question that Bibi’s performance of a song he learned at his school is resonating with many on the eve of the High Holidays.

“Someone please give me the URL to this kid’s Rosh Hashana and Yom Kippur livestream,” tweeted Rabbi Danya Ruttenberg to her 115,000 followers Sunday. “Or maybe I’ll just spend the days watching this over and over again.”

This kid gave me Elul vibes that no Rabbi could possibly do. pic.twitter.com/cpwSADU9hW

Because nothing on the internet is simple, the video spurred a rumor, stated with authority by multiple people on social media, that the video starred a son of Amar’e Stoudemire, the basketball player and recent convert to Judaism. “If we saw a cute video of a white kid singing Avinu Malkeinu, would we automatically jump to the conclusion that he was a famous Jew’s kid?” tweeted Tema Smith, who writes frequently about Black Jews within the Jewish community. “It feels like the digital equivalent of the experience so many Black Jews describe when stepping into communal spaces, being asked to legitimize their right to the space.”

Others who amplified the video did know who Bibi was, even though he is not identified in it. They included people associated with Sinai Academy, the school in Cape Town, South Africa, that he attended before the family moved to Australia two years ago. Shapiro credited both that school and the one he attends in Perth, Carmel School, with developing her son’s love for Judaism.

“I see how he comes back singing happily and with his own free will,” she said. “It hasn’t been a dictatorial kind of, ‘You will learn this because you have to.’ They teach with love. That’s been passed on to him and that’s what he gives back.”

We spoke to Shapiro — perhaps now to be known forever as Bibi’s mom — about the video; her take on the rumors; and what she hopes comes next for her son. First up, a new video of another Rosh Hashanah song.

JTA: What’s the story behind the video and what do you make of how it has been received?

Shapiro: I took the video in our dining room and sent it to a few family members. I don’t believe in exposing my children on social media. But obviously somewhere along the line, it wound up there. I don’t know how — none of the big Facebook posters are anybody I’ve ever heard of or sent it to.

It’s not something I would have chosen but it’s happened and the positive responses have just been overwhelming. I sent it to a close friend and said I’m so upset that this happened, and she said, “But Hashem obviously wanted this message to go out in this way.” I really am trying to take it from this perspective.

This is a Yom Kippur song, not exactly a happy song. Why do you think people are saying the video made them happy?

He is such a passionate little boy. He’s been singing all his life, all the time, from when he was a baby. When he heard an advert on TV he would copy it. He’s very sensitive and very passionate and I think it comes across.

I realize there were a few mistakes. If I had been planning to share I would have made sure it was perfect before I posted worldwide — but this shows things don’t have to be perfect to have real impact and that also made me happy. His purity and his innocence and his passion are touching.

He knows nothing about this. I’ve made copies of some of the comments for when he’s older but not for now. He doesn’t know what Facebook is or Twitter, Instagram. He knows that I am happy and other people are happy when he sings and that’s all that matters.

What comments stuck out to you?

I saw someone say, “This is a future hazzan.” And that’s really meaningful to me. When I knew that I was having a boy, one of the first things that went through my mind was I would so love him to be on the bimah at shul, not even knowing of his musicality.

I also saw someone say that this was more meaningful in the preparation for the chagim [holidays] than any other rabbinic text she had read.

And for me — and a few people have commented on it — “Avinu Malkeinu,” I’ve never heard the English words for it. It certainly impacted me, and if as a child I had learned it this way, it would have been so meaningful. I’m so glad my child gets to understand what he’s singing.

People have said it’s made them happy and given them hope and even though I don’t understand it, the fact that it has done that to people especially at this time in the world, I’m so grateful for it.

One thing that struck me is that during this pandemic, even for people who are going to synagogue, singing isn’t happening and children aren’t present. To hear a child sing is sort of unusual right now.

We’re very lucky in Perth — it’s one of the very few places in the world that COVID hasn’t impacted. We’re still able to go to shul with restrictions. So if he’s able to provide that for people, then what an incredible blessing and miracle. I’m awed that my little boy could do that for people.

Your son is Black, and some of the comments I saw mentioned that. There were also rumors that the video was of a son of Amar’e Stoudemire. What role do you think race played in the video’s reception?

If I had seen him and not known him, I would wonder about the color issue, too.

There was one comment that I saw, where someone said, “He doesn’t look Jewish but he sounds it. It just shows you that you don’t have to look Jewish to be Jewish.” Somebody else commented to say, don’t be so stereotypical.

Bibi is adopted — we adopted each other when he was a baby. He has been raised Jewish, and it’s all he knows. Halachically [according to Jewish law] he is a Jew. I’ve come to realize he has a Jewish neshama [soul] even though entering the world he was not born into a Jewish family.

Perth is a very small Jewish community, with one school and no kosher restaurants. And there are very few non-whites day-to-day if you’re in a certain area. A racially diverse Jewish community it is not at all, but from the first moment, I have never felt anything but accepted and included and welcomed across the board. It’s not to say it’s not ever going to be hard, but it hasn’t been our experience.

When I saw that people were saying he was Amar’e’s son, initially I was angry. But it wasn’t so much about racial stereotyping. I googled the family, and they do look similar. I was upset that somebody had the audacity to post that without checking the facts.

It would be interesting to know if [Stoudemire’s son] did sing. I would love for Bibi to have more Jewish not-white role models. There’s a rapper who came to South Africa, Nissim Black. The concert was only for adults but I would have loved to have taken him to that.

So will your son’s many new fans get to see more from him?

Part of me is so tempted in some ways, now that the whole thing has been started. There’s unlikely to be a Youtube channel, but Zeesy Deren [the principal of the South Africa school], her brother is Choni G, a famous South African religious singer. She said he mentioned to her that he would love to work with Bibi, and I would love that. Bibi’s biggest inspiration is the music of Jewish religious boys choirs, and my absolute dream is for him to be part of one of those groups. I would love that and he would love that.