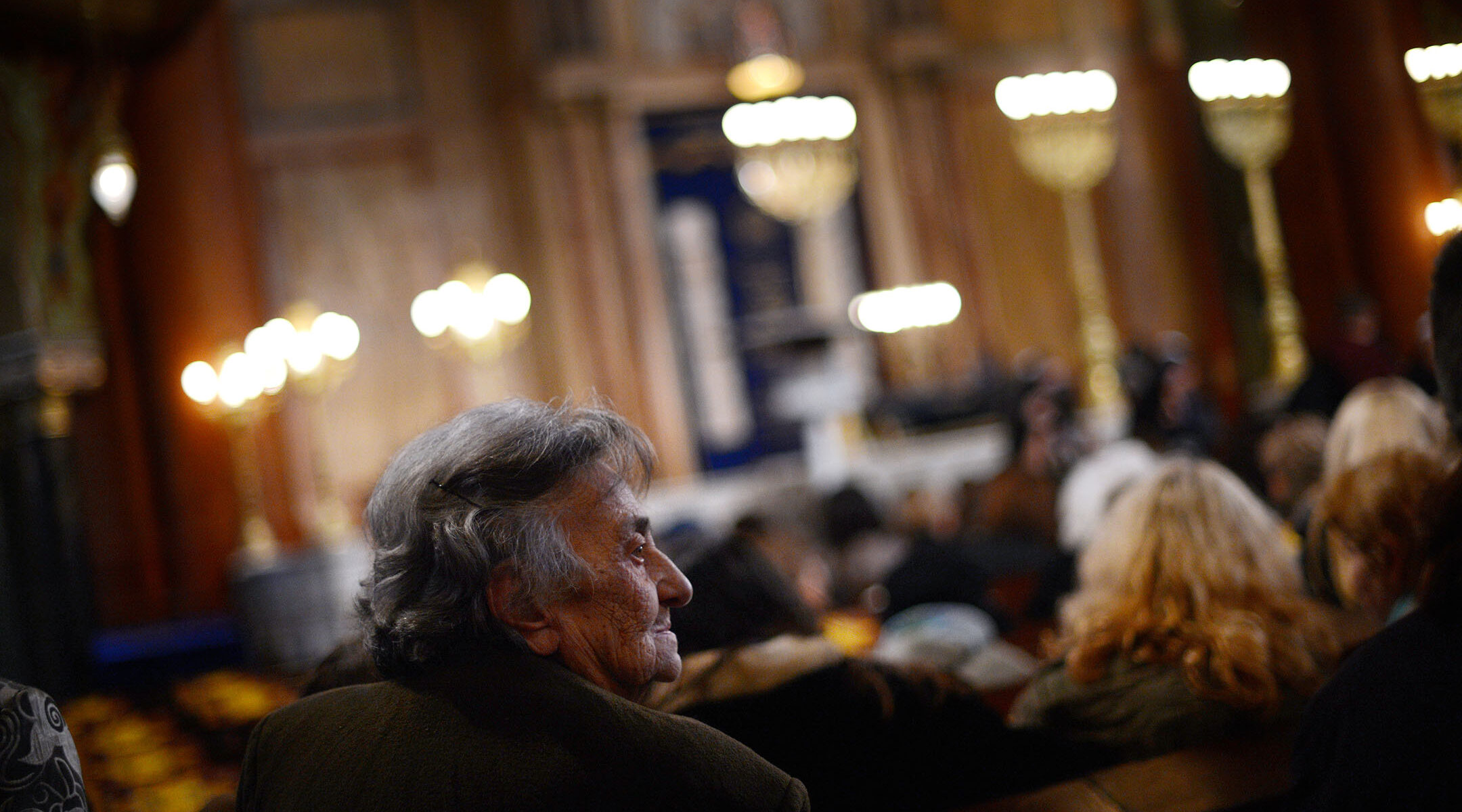 A Bulgarian woman attends a commemoration ceremony at the Sofia Synagogue, one of the largest and most ornate of its kind in the Balkans, March 10, 2013 (Dimitar Dilkoff/AFP via Getty Images)
Advertisement

(JTA) — With 20 years of experience as a professional singer, Petra Ernyei had enjoyed a reasonable level of job security.

During the High Holidays especially, Ernyei, 44, could depend on steady gigs from local Jewish organizations in her native Czech Republic, home to some of European Jewry’s oldest heritage sites.

She has performed at the Maisel Synagogue, a 17th-century Renaissance temple with three naves, and the synagogue in Polna, which was rebuilt in recent years after having been used by the Nazis as a warehouse for stolen Jewish property.

But with the coronavirus pandemic blowing a large hole in the community’s budget this year, several employees have been let go by Czech Jewish groups and even freelancers like Ernyei have seen their work evaporate. Now instead of working for the community, she is relying on it to survive, joining a growing list of Prague Jews who have come to depend again on international Jewish philanthropy to make ends meet.

“I try to be optimistic. Sometimes I cry,” Ernyei told the Jewish Telegraphic Agency. “We don’t go out anymore, the kids mostly stay at home or go to friends. Life is different now. But I remember that we’ve got our health and we’ve got each other.”

Six months after the coronavirus brought much of European Jewish life to a halt, communities across the continent have mostly adjusted to life under the cloud of a global pandemic. Schools and synagogues have largely managed the transition online, and initial concerns about kosher food shortages and the inability to perform certain religious practices have not come to pass.

But as Europe’s Jews celebrate the High Holidays, the financial repercussions of the pandemic are just now coming into focus. They threaten to undo years of progress toward achieving financial independence.

Smaller Eastern European communities, which languished under communism for decades and only recently have come to develop local sources of revenue that enabled them to shed their dependence on foreign donors, are increasingly depending anew on external aid.

This reliance on aid is familiar territory for Jewish communities in former communist countries like the Czech Republic and Bulgaria. The American Jewish Joint Distribution Committee, or JDC, especially spent hundreds of million of dollars on caring for the basic needs of needy Jews in the aftermath of the collapse of the Iron Curtain in the 1990s.

Communist repression meant that most Jews in newly democratic countries had little knowledge of their religion and its traditions. So millions of dollars more went to helping them build community institutions, including schools, summer camps and youth programs.

Some communities also were given back real estate that had been stolen from Jews in the Holocaust, a mixed blessing that included spectacular synagogues but also dilapidated structures and cemeteries that strained their budgets.

Over time, as some of those sites became lucrative tourist attractions and the ranks of local supporters swelled, many of the communities have become less dependent on charity and more self-reliant, though with razor thin margins.

The pandemic has complicated a delicate balance sheet.

“The coronavirus crisis is compounding the preexisting financial problems of small communities in Europe,” said Sergio DellaPergola, an expert on Jewish demography at the Hebrew University of Jerusalem. “They’re limited in their sources of income and burdened by maintenance expenses on old real estate.”

In the Czech Republic, where about 3,000 Jews live, the coronavirus has led to a revenue shortfall of about $6 million for Jewish organizations, according to Petr Papousek, the president of the Federation of Jewish Communities there. In Prague, where most Czech Jews live, about 50% of the annual budget has disappeared.

The shortfall owes to a near total halt in ticket sales at the Jewish Museum in the capital city, which generated thousands of dollars daily before the pandemic. And there was a secondary effect: Revenue from community-owned property rented to hotel and restaurant owners, businesses that took a beating because of the coronavirus, also took a serious hit.

“There’s no sign that this new reality is going to change in the near future, or before 2023,” Papousek said. “We need to start thinking about a new financial model.”

In Hungary, home to one of the larger Jewish communities in the region with about 100,000 people, the coronavirus cost the Jewish community about $1 million in lost ticket sales to the Dohany Synagogue, the second largest in Europe and a popular Budapest tourist attraction. Mazsihisz, the main Jewish umbrella group in Hungary, managed to avoid dismissing any of its dozens of employees, but it did mandate a 40% pay cut. That forced some staff to quit because the reduced salary was too little to live on, a member of the Mazsihisz board said.

In Bulgaria, dozens of Jewish community employees are in danger of being let go as the community grapples with the loss of tens of thousands of dollars a week from ticket sales to the Sofia Synagogue, one of the largest and most ornate of its kind in the Balkans. Those revenues help fund the Jewish school and kindergarten in Sofia, the capital, as well as social activities for young people and older adults, who make up a sizable chunk of Bulgaria’s Jewish population of about 5,000.

“We used to have 200 to 300 visitors each day, many from Israel,” said Alexander Oscar, president of the Organization of the Jews in Bulgaria Shalom. “Now they’re not coming anymore because of corona and we’re going to have a serious budget problem.”

So far, the Bulgarian community has managed to avoid staff layoffs — but Oscar says that won’t be possible much longer.

“We’re barely managing to pay the bills this month, but after September I don’t know what we’re going to do,” he said.

As in the United States, where a coalition of donors quickly pulled together an $80 million emergency fund as the pandemic gained ground this spring, the JDC has led an emergency program to provide relief to 1,600 Jewish families in 16 countries, including 11 in Europe.

The first phase of the Pandemic Humanitarian Relief Program — it’s being funded by a consortium of donors that includes the Ronald S. Lauder Foundation, the Maurice and Vivienne Wohl Philanthropic Foundation, the Maimonides Fund and the Genesis Philanthropy Group – began in April with stipends ranging from $100 to $180 each month.

That fund is in addition to a $17 million allocation last month from the Israeli government and the Jewish Agency aimed at supporting small Jewish communities through the crisis. An earlier $10 million Jewish Agency fund created to lend money to communities at risk has received applications from 80 communities worldwide.

The growing reliance on external funding represents not only a step backward for many of these communities in terms of self-reliance, but also comes as many potential benefactors run low on cash themselves because of the pandemic. But many in the communities say their institutions are strong enough to weather the crisis — in part because they know how to work together and leverage resources that didn’t exist decades ago.

In April, the Chabad-affiliated EMIH Jewish federation in Hungary scaled back its lucrative kosher foie gras production line – the only one of its kind in Europe – to help avert kosher meat shortages elsewhere in Europe. The switch reduced revenues at the federation’s slaughterhouse, but it enabled a quadrupling of capacity to as much as 10,000 birds a day as a quick resolution to early kosher meat shortages.

The crisis has also strengthened bonds within communities that almost didn’t exist 40 years ago under communism. In Bulgaria, a program called Phone a Friend encouraged younger community members to reach out to older ones who were either confined to their homes or at an elevated risk outside them.

Martin Levi, a 33-year-old events manager from Sofia, made calls each week to check in on two men in their 70s. One of them wanted to know why he was talking to an old man instead of finding a wife, which made Levi laugh. The other had traveled widely and was a skilled conversationalist.

Our community “has managed to stick together, improvise, regroup and adapt,” Levi said. “It exists and it can survive this setback. It makes me feel proud to be a Bulgarian Jew, and it shows the return on the investment that it took to build this community.”

To Russel Wolkind, the director for planning and partnership for JDC’s Europe division, this is evidence that the fallback to external aid will be only a temporary measure. The communities of Eastern Europe have developed the infrastructure to stand on their own when circumstances improve.

“Yes, there’s external funding, but the handholding of the 1990s is a thing of the past,” Wolkind said. “The communities are administering this and other emergency measures themselves, and are rising to the occasion in an impressive way.”