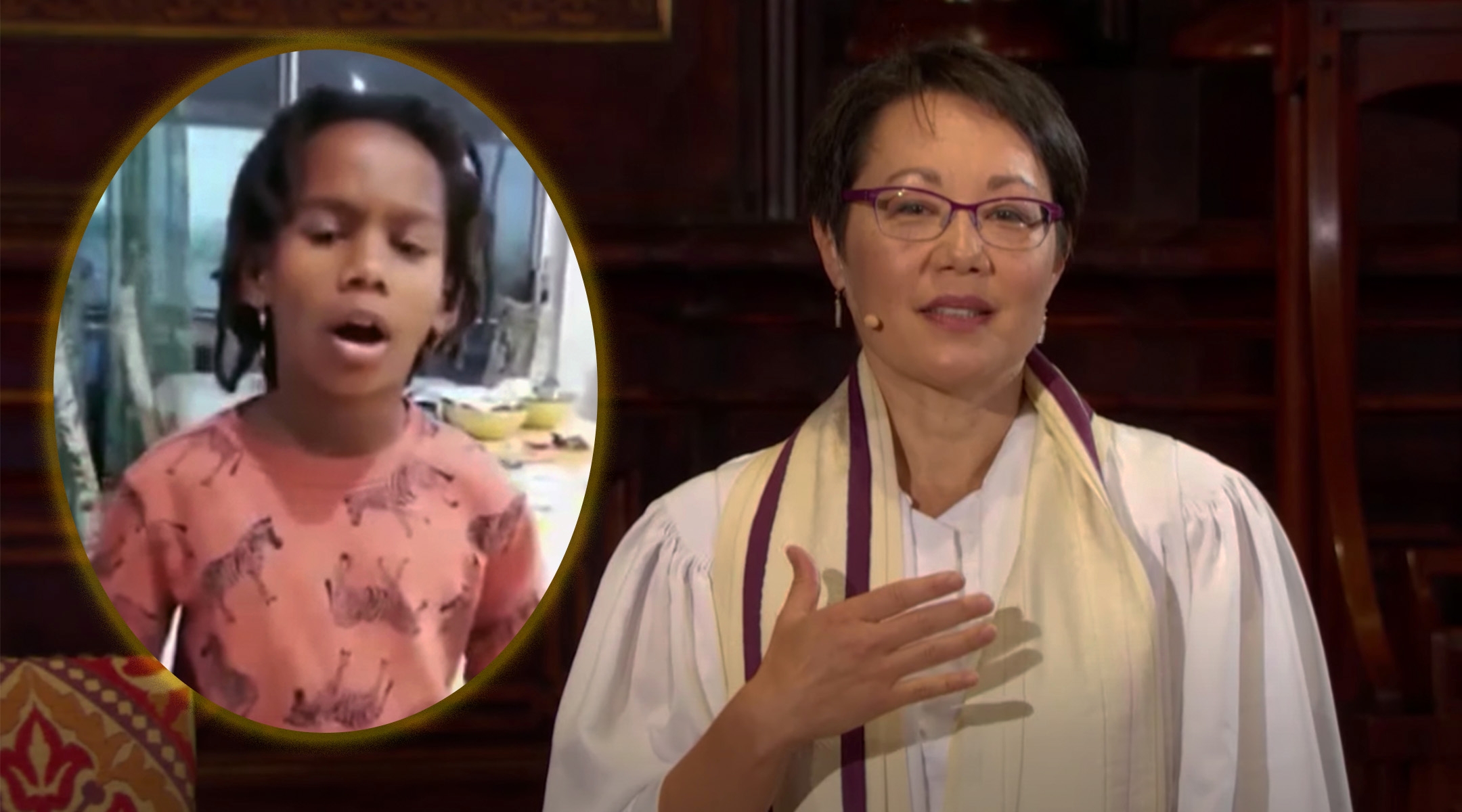 (JTA) — The first time 6-year-old Bibi Shapiro found out just how widely viewed the video of him singing “Avinu Malkeinu” had been, he was sitting on his mother’s lap in Australia being beamed into Yom Kippur services at one of the largest synagogues in the United States.

Like so many others who saw the video over the past several weeks, Angela Buchdahl, the senior rabbi of New York City’s Central Synagogue, was touched by the passion Shapiro brought to his performance. She also noted that Bibi, who is Black, did not conform to stereotypes about what Jews look like, the topic of her Kol Nidre sermon.

So Buchdahl reached out — and began a conversation that ended with Bibi leading her congregation in the iconic High Holiday song.

“Our community just got to hear you sing and I think our hearts are all just opened up,” the rabbi told the Perth boy before his performance. Afterwards, she said, “Connecting with both of you today — it feels like that’s what reminds us that we are a huge Jewish family.”

That was the theme of Buchdahl’s Kol Nidre sermon, in which she argued that Jews should stop thinking of themselves as a race — a historically dangerous, exclusionary concept — and instead as a family.

Buchdahl told the Jewish Telegraphic Agency that she had reached out to Bibi and his mother, Nina Shapiro, after reflecting on her own experiences as a Korean-American woman who, despite holding one of the most influential pulpits in American Judaism, still elicits confusion when people learn she is Jewish.

“I was taken with how clearly Bibi’s Jewish neshama [soul] comes through, and how much is at stake for us to make sure he never feels as marginalized and othered as so many Jews of color feel in our community,” Buchdahl told the Jewish Telegraphic Agency about her outreach.

“Plus,” she added, “I just wanted to meet the mom who raised such a joyful Jewish child who sings with every fiber of his being!”

The video circulated widely last month after Nina Shapiro taped her son singing a children’s version of the song that is an emotional high point of High Holiday liturgy. Clad in a red zebra-print sweatshirt, Bibi is seen belting the English words “I’m sorry for all I did wrong” before transitioning to the traditional Hebrew, at one point being gently corrected by his mother offscreen.

Jewish viewers around the world, including some prominent rabbis, praised Bibi’s performance for channeling the kind of spirit they only aspire to feel or elicit in their synagogues.

Buchdahl was not the only admirer to reach out to Bibi and his mother after seeing the video. At least one other Jewish family with nonwhite children expressed interest in being connected, saying they had few models of their own.

The Shapiro family’s former rabbi from South Africa also spoke about Bibi’s video during Yom Kippur services in England, where he now works, saying that Bibi’s singing epitomized the “absolute conviction, absolute recognition, absolute acceptance” in God’s judgment that Jews should feel as the holiday neared a close.

And Bibi got to Zoom with one of his idols, Choni Goldman, a popular South African Jewish singer, who created an a cappella backing to Bibi’s video. (The pair were connected by Goldman’s sister, who runs Bibi’s old school in Cape Town.)

“We’ll definitely do more collabing together,” Goldman, whose stage name is Choni G, told JTA. “Happy to grow or nurture his talent — although I’m not sure he needs my help!”

Meanwhile, while Buchdahl told her congregation that the English words set to the classic tune were new to her, a community of Jewish song leaders recognized the lyrics from countless children’s services — and set out to determine their origins. The answer, according to Lisa Baydush, a singer-songwriter in the Washington, D.C., area who is an unofficial historian of Jewish children’s music, reflects the folk process by which Jewish music often evolves.

Sherrie Stohl, a musician who lives in Texas, wrote very similar words in the late 1980s, and they were first recorded by Paul Zim in 1998. (Bibi’s teacher in Perth told his mother that she is certain she learned the song from a recording but couldn’t recall which one.)

Another musician, Sarah Dekelbaum, penned a similar version in 1997 that swapped in “I’ll try to be caring, more loving and sharing” for “I’ll try to be better forever and ever.” (Early childhood educators have argued that children should be encouraged to discuss specific ways they can improve their behavior rather than just apologize for past errors.)

Then, in around 2005, a musician living in Minneapolis wrote a version that again tweaked a few words — resulting in the exact version that Bibi sang. That musician, Laurie Herstig, told JTA that she had immediately recognized her lyrics when she saw Bibi’s video.

“It blew my mind,” she said. “This just shows the magic of the Jewish community — we share beautiful things.”

Nina Shapiro told JTA that she had never meant for the original video to break free from her family-and-friends messaging groups. But while the onslaught of attention may have been unintended, Bibi’s mom said it was heartwarming for her family, which moved to Australia from South Africa two years ago.

“We as a family and as a community have been so uplifted by these connections, new and old, that have emerged from Bibi’s video,” she told JTA last week. “The Jewish nation, so diverse in some ways, remains so inextricably connected by a common thread.”