Should Jews pray for Trump’s health? Are they required to? We asked rabbis for their guidance. 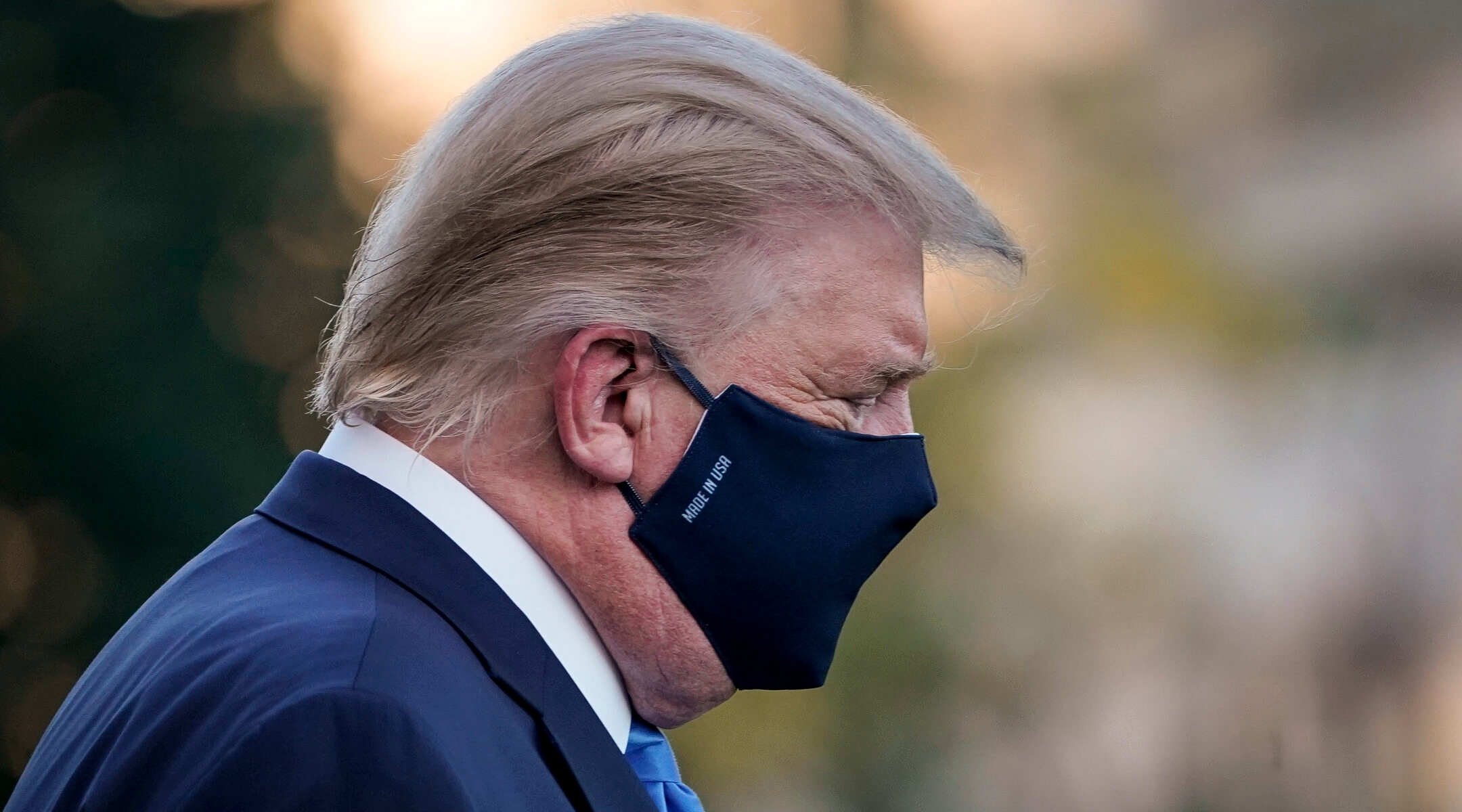 Writing on Alma, Zemel, a former synagogue administrator and current writing student, said he was comfortable wrestling with his feelings and didn’t feel the need for rabbinic guidance. But our tradition offers a rich literature, and indeed debate, about how and when to pray for government leaders and for the health of those whom we do not like — relevant for the majority of American Jews who are not fans of Trump.

The Jewish Telegraphic Agency asked rabbis to share the advice they would give a congregant seeking guidance about how to feel about Trump’s illness. Here’s what they told us.

“Judaism teaches we should pray for the sick, not for the sick whom we like, and I am mindful of Pirkei Avot 4:19, not to rejoice in the downfall of one’s enemies. I appreciate the savagery of the political divide, but I hope no matter who is suffering with this dangerous disease, we can pray both that they will heal and also that they will learn from the experience, and grow more open-hearted and compassionate, as we hope for all of us in any trial or tragedy.”

“My job, as a spiritual leader, is to guide in prayer and model what it means to ‘do justly and to love mercy, and to walk humbly with God (Micah 6:8).’ In this moment, I believe our tradition calls for us to lift the anchors of the yetzer hara (evil inclination) which may be present in order to pray for the health of our leaders — in this case, those who serve the American people. Along with our prayers of healing, I pray that our president and other government leaders learn from this moment in order to amplify the seriousness of this pandemic with consistent (and necessary) guidelines and messaging meant to save lives.”

“Last Thursday, I happened to go to bed early, which meant that I missed the news of President Trump’s diagnosis. As I scanned social media Friday morning, I kept seeing posts from people either celebrating the news or berating others for celebrating. What I wanted to know heading into Sukkot — our z’man simchateinu, time of rejoicing —  was how Jewish texts might address the topic of taking joy in the suffering of one’s enemy.

“Being a rabbi, I made a study sheet, asking colleagues on Facebook to recommend texts and peppering screenshots of tweets from today’s sages amidst the traditional sources.

“The short answer? As usual, Torah is divided on exactly the correct approach, but it seems fairly clear that wishing for harm to befall another has the potential to harm the wisher on a moral level.

“We are all capable at every moment of listening to our yetzer hatov or yetzer hara — our instincts for good or for evil. Our sacred texts ask us to choose life. So let’s focus on life — on acting to preserve and improve life for ourselves and for all who dwell within our borders. Let’s not sully that choice by diverting energy into wishing for or celebrating somebody else’s brush with death.”

“I had a conversation with a friend, also a rabbi, about whether to include Trump on our congregational Mi Sheberach list, like we included Justice Ruth Bader Ginsburg. Our policy has always been to include anyone a congregant asks to include, and nobody had asked by the time our Friday night list was printed. I also discussed with a colleague the message it sends to those in marginalized communities to put his name on our list, especially when he is so directly responsible for so much suffering (in a way that has made others’ lives needlessly difficult). I didn’t get any real consensus about that one. We do definitely allow congregants to add names as we recite the Mi Sheberach prayer, and somebody did add the president’s name at that time.”

With the news that Trump had tested positive for COVID, I couldn’t stop myself from wishing that the disease works strongly upon him, kills him even. … But is it OK to pray for the death of an evil person? Not just to think about it, but to actively enter a prayerful state and yearn for the disease to end his life in this body, that good may come to so many lives who have suffered on his account?

“Discussing that question with a friend, I was reminded of a midrash that appears in the commentaries on the Book of Esther, where Haman, the fascist villain, is the archetype of pure evil in the Judaic tradition.

“Two variants of the commentary appear. In one, all the trees of the world — the apple tree and the oak, the willow, the cedar, the olive and the palm — come before God and beg to be the vehicle for Haman’s death. They want to be the tree that Haman will hang from. In the other variant of the story, all the trees come before God, the same trees, and none wishes to be the tree upon which Haman will be hung. They don’t want to be proximate to evil, they don’t want to be contaminated by his vileness. In the end of both stories, the thorn bush is chosen to be the tree upon which Haman hangs.

“There are two instincts regarding evil — the desire to destroy it, and the inclination to flee its reign. Both live in us, and both yearnings have their place. If no one comes to fight Hitler, to protest Trump and the Proud Boys, evil thrives. If we come at him untethered to the wisdom that fighting evil carries the risk of being tainted by it, we are already undone. The line between these two yearnings is flimsy as a thorn. And living one without the other does not leave us whole.

“So yes, you can pray for his demise, but you will be changed by that prayer, and maybe not for the better.”

This piece was lightly adapted from Fredman’s email newsletter.

“It is more than appropriate for us to to pray for the health and recovery of President Trump. The bracha we recite in the presence of a country’s leader should extend to the leader’s wellbeing, so long as that leader is not clear and present danger. Whether we are pleased with Trump as president or not, he has behaved very favorably to Israel.”

“We added the president’s name to our Shabbat healing list praying for refuah shlemah for all in our government who are ill with COVID-19. Our clergy team understands that our response as a Jewish community must reflect our deepest values. As Hillel said, ‘In a place where there is no humanity, we must yet strive to be humane.'”

“At our virtual morning minyan, we prayed for the healing of body and spirit of those who are ill, and that a sincere act of teshuva be their choice moving forward, leading this nation to care for each other — in this moment of national reckoning — by setting an example of wearing masks and practicing social distancing, upholding that the life of all human beings should be preserved. We prayed that all may realize that we are connected in body, soul and breath of spirit.

In the spirit of Berachot 10A, as Rabbi Meir’s wife Beruriah reminded him, we do not pray for the sinners to cease, but for their sins to cease.”

This response was lightly edited for length and clarity.

“Irrespective of what they think of our president, every American and every Jew should pray for his well-being. The office of the president is larger than any one person and there are times when personal feelings must give way to national considerations.

“But we pray for more than his recovery. Because penitence is central to our faith, we believe that even those who may have acted badly are capable at any moment of repenting sincerely. In this particular case, it may be too much to hope that a brush with mortality will leave Mr. Trump chastened. He may not return to the oval office having undergone an epiphany about the gravity of this pandemic. And he may not drastically alter his view of mask-wearing. But when it comes to the health and safety of the American people, even the most modest change could save thousands of lives. As we do every Shabbat, we pray that God bless the president and “set in his heart a spirit of wisdom and understanding.” Sometimes a little wisdom can go a long way.”

If you are a rabbi who is grappling with this question and would like to have your thoughts included, please email opinion@jta.org.