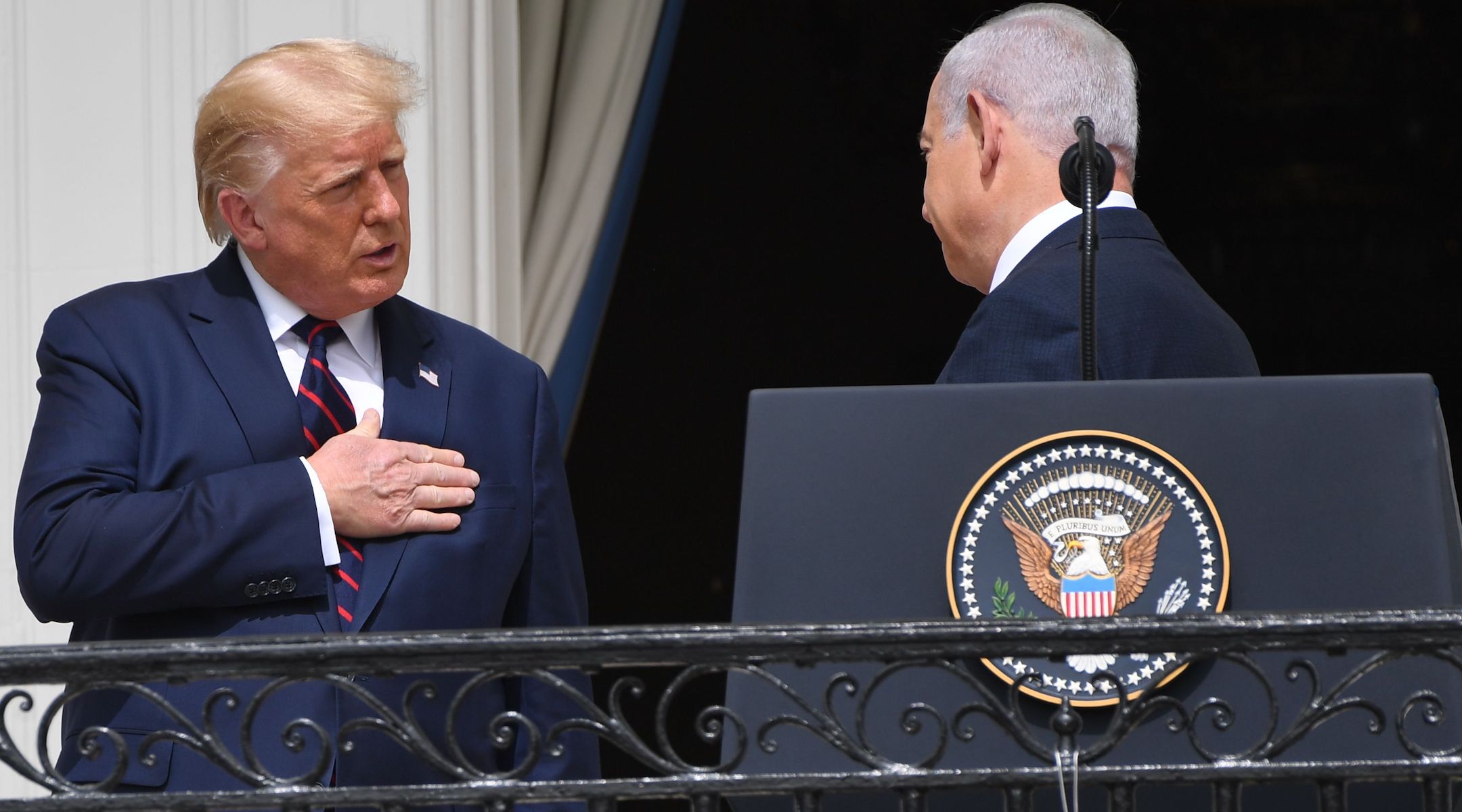 President Donald Trump talks to Israeli Prime Minister Benjamin Netanyahu from the Truman Balcony at the White House during the signing ceremony of the Abraham Accords, Sept. 15, 2020. (Saul Loeb/AFP via Getty Images)
Advertisement

WASHINGTON (JTA) — President Donald Trump spent much of his 20-minute call with American Jewish leaders making the case for more American Jews to vote for him. He closed by repeating a line that has raised their eyebrows before.

“We really appreciate you,” Trump said as he signed off the call, an annual pre-Rosh Hashanah presidential tradition. “We love your country also.”

Earlier, introducing his Jewish son-in-law, Jared Kushner, who brokered the historic deals with the United Arab Emirates and Bahrain that were signed Tuesday at the White House, Trump called him “an unbelievable leader for Israel.”

The comments echoed others he has made in the past that suggest that American Jews think of themselves as Israelis, including at a White House Hanukkah party two years ago.

Trump’s comments on the call also blurred the line between White House events and campaigning. Until his presidency, campaign appeals from the White House have been seen as unethical, if not illegal.

He pressed listeners to campaign for him and suggested that Israel would suffer if he is not reelected this fall.

“I have to say this, whatever you can do in terms of Nov. 3 is going to be very important because if we don’t win, Israel is in big trouble,” Trump said.

The president listed what the United States was doing for Israel, saying it paid $4.2 billion in annual assistance to the country. The figure is $3.8 billion and stems from a deal brokered by Trump’s predecessor, Barack Obama.

“We’re in the Middle East because of Israel,” Trump said, a position at odds with the myriad interests, including the free flow of oil, that the United States has in the region.

Arthur Stark, the chairman of the Conference of Presidents of Major American Jewish Organizations, asked about Trump’s plans to assist Israel in confronting actors such as Iran and Turkey who back terrorist groups like Hamas and Hezbollah. Trump’s reply, again: Vote for Republicans.

“This is really a time that’s very important in the life of Israel and the safety of Israel. And we will do a great job,” he said. “If the other side gets in all bets are off. I think it’ll be a whole different story. I think it’ll be exactly the opposite.”

“I remember Bibi coming over and begging him, begging him to a point of humiliation that please don’t do the Iran deal,” Trump said. “He did it. I broke it, but he did it. And yet the Democrats get 75% sort of like habit. It’s automatic. I hope you can do better with that. I hope you can explain to people what’s going on.”

Jews traditionally vote in large numbers for the Democratic presidential nominee. A poll this week showed Joe Biden getting 67% of the vote and Trump 30%. But Jewish voters in swing states, particularly Florida, could swing what may be a close election, and Trump signaled that he was mystified about why he would not command a larger share of the Jewish vote.

“Which really amazes me, and I have to tell you, because I saw a poll that in the last election, I got 25% of the Jewish vote and I said here I have a son-in-law and a daughter who are Jewish, I have beautiful grandchildren that are Jewish. I have all of these incredible achievements,” Trump said. “I’m amazed that it seems to be almost automatically a Democrat.”

Aaron Keyak, the Jewish engagement director at the Biden campaign said that Trump “suggesting that Jewish Americans are somehow less than loyal to the United States of America” was not surprising, given past statements Trump has made that drew Jewish criticism.

“What remains astonishing is the silence of his supporters — especially those in our community,” Keyak said. “When Trump says to us that ‘we love your country also,’ we hear him loud and clear. So do the anti-Semites.”