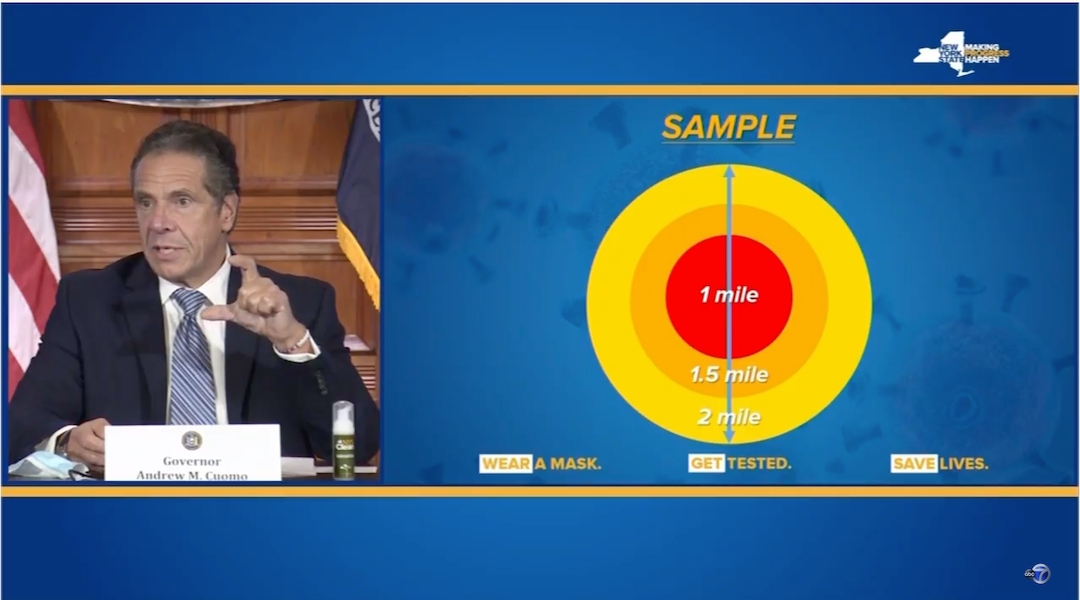 (JTA) – It won’t just be schools that close in areas of New York City with many COVID-19 cases. New York Gov. Andrew Cuomo has announced new restrictions on houses of worship, with services in some parts of the state capped at just 10 people.

The new restrictions will go into effect by Friday, as Jewish communities begin celebrations of Shemini Atzeret and Simchat Torah, the last of the fall holidays, which are generally celebrated with large gatherings and dancing.

The decision marks the first time in-person religious services, central to Orthodox Jewish communities, will be restricted since the spring. It constitutes a major blow to the communities at the end of the High Holiday season.

The rules will be applied to targeted geographic areas depending on the severity of COVID upticks, with less strict restrictions applied to the areas immediately surrounding them.

Cuomo had said Monday that he would speak to leaders of the Orthodox Jewish community about ensuring safety precautions are followed at synagogues, where, in some New York City neighborhoods, attendees say mask-wearing has remained lax even as more masks are worn on the streets. But by Tuesday, he moved forward with stricter guidelines that rolled back some of New York’s reopening phases.

The governor’s new rules designate different parts of the state as red, orange and yellow zones with red zones representing the areas with the most severe outbreaks.

“This is about mass gatherings and one of the prime places of mass gatherings are houses of worship,” Cuomo said, showing a picture of an Orthodox Jewish prayer service. “That is the truth.”

The new restrictions also require all schools that are open for in-person learning in the yellow zones to mandate weekly testing of students and teachers. Schools in red and orange zones will have to close.

He also said he would close schools in Rockland and Orange Counties, two counties in upstate New York that are also home to large Orthodox Jewish communities and which have seen major increases in COVID test positivity rates in recent weeks.

Most Orthodox Jewish schools are closed this week anyway for the holiday of Sukkot.