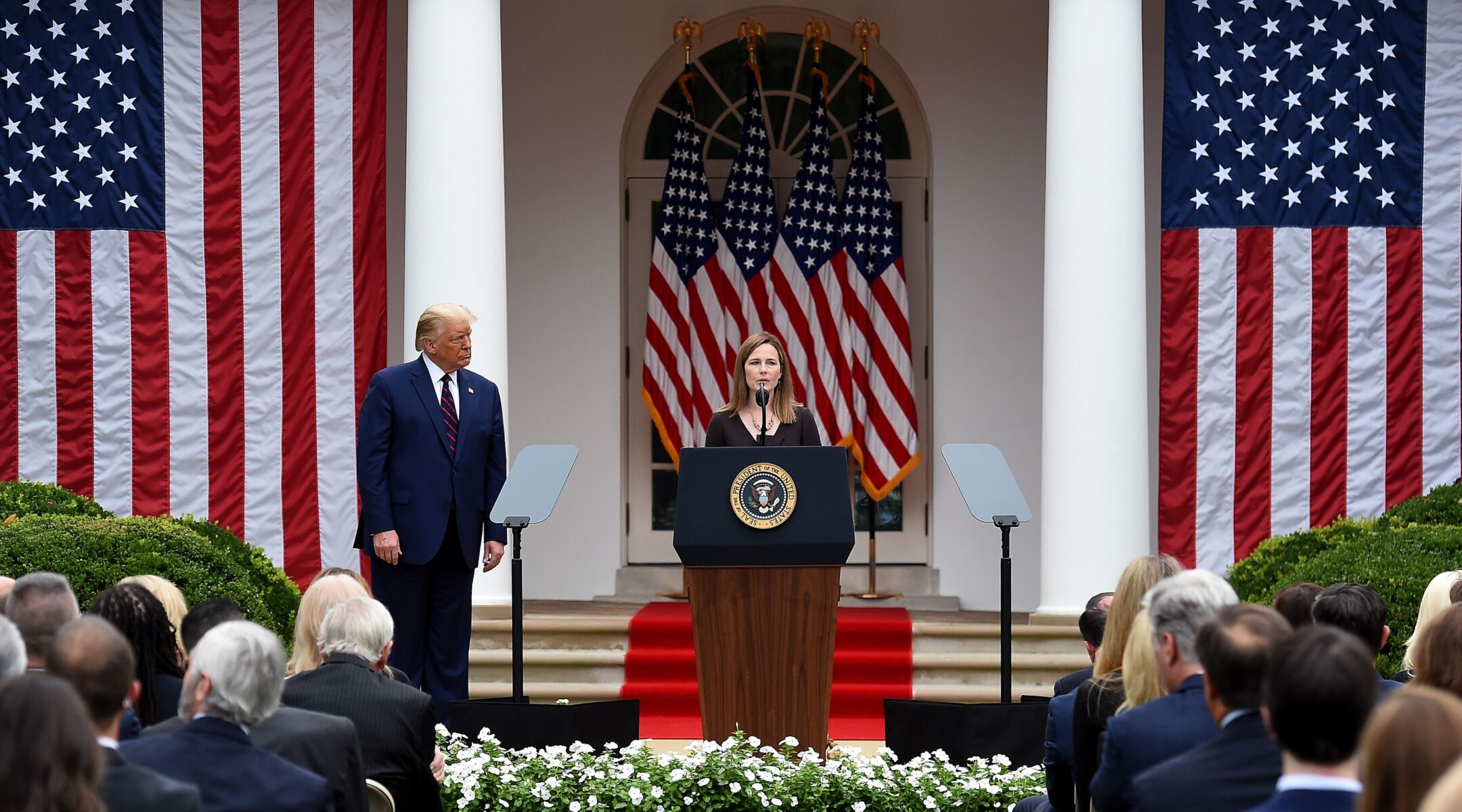 Judge Amy Coney Barrett speaks after being nominated to the Supreme Court by President Donald Trump in the Rose Garden of the White House, Sept. 26, 2020. (Olivier Douliery/AFP via Getty Images)
Advertisement

(JTA) — It feels like it has been a long time since Amy Coney Barrett’s walk from her home to the car that would take her to the White House ceremony where she would formally be announced as President Trump’s pick for the Supreme Court.

Since then, the announcement has been revealed to be a likely COVID-19 superspreader event, raising all kinds of practical questions about the future of the appointment.

But we shouldn’t forget what we were talking about last week: some of the criticism that Amy Coney Barrett faces for the way she expresses her personal faith. That criticism should be worrisome to believers of any religion, including Jews.

Take the way that people marveled at Barrett’s seven children. While even some people who oppose her nomination noted that her career success with many children at home should be praised, others acted like having a large family represented poor decision-making or would compromise her ability either to work or to parent effectively. One contributing writer to The New York Times Magazine and Vanity Fair went so far as to question whether she could possibly “be a loving, present mom.”

This criticism lands on many religious families who choose to have more children than the national average of less than two children per woman. We Jewish mothers with many young children are all too familiar with the unfair criticisms Barrett faced.

In addition to critiquing Barrett’s family size and parenting choices, her religious beliefs are facing a level of scrutiny that should make those who value religious liberty squirm. In a piece about the permissibility of putting Barrett’s Catholicism on the agenda of her confirmation hearing, NPR explained, “If Amy Coney Barrett’s religious beliefs were to be raised during her confirmation hearings, it would presumably be because her Catholic faith appears to be of unusual intensity and character.”

Five of the eight sitting Supreme Court Justices are Catholic, two are Jewish, and one, Justice Gorsuch, was raised Catholic but is now a Protestant.

In particular, Barrett’s work with People of Praise, a Catholic faith organization, has received outsized attention. Conspiracy theories abound about the group and her connection to it, like the now-debunked rumor that it inspired “The Handmaid’s Tale.” People of Praise has been turned into a boogeyman, a sinister group of Catholic extremists, instead of what it is: a “lay ecclesial movement,” or a religious group that does not fall within the formal structures of a church.

It’s not the first time Barrett’s Catholicism has been used against her. In what eventually became a famous rallying cry for Catholics everywhere, in her 2017 confirmation hearings before the Senate Judiciary Committee, leading Democrats questioned if Barrett could be both a judge and a devout Catholic.

“Why is it that so many of us on this side have this very uncomfortable feeling that dogma and law are two different things, and I think whatever a religion is, it has its own dogma. The law is totally different,” said Senator Dianne Feinstein. She continued with a line that would be printed on thousands of T-shirts and bumper stickers: “The conclusion one draws is that the dogma lives loudly within you and that’s of concern.”

Some of the latest commentary has deepened that line of criticism. In Politico, Professor Massimo Faggioli of Villanova University, a scholar of Catholicism, wrote, “Why Amy Coney Barrett’s Religious Beliefs Aren’t Off Limits.”

The practical consequences of this line of reasoning could be devastating: The next time someone like Joe Lieberman runs for office, do Jews really want critiques of Judaism and the Orthodox community to be fair game?

Jews have honorably served in every branch in government. But we also must harbor concerns that someone will express concern that our “dogma” lives too loudly within them to do our jobs effectively. As it is, those Jews with strong connections to Israel face deeper scrutiny in the national security realm, facing more hurdles for security clearance and jobs in national intelligence. Do we really want to stand by as religion is made into even more of a cudgel with which to criticize individual members?

Accusations of dual loyalty have plagued Jewish Americans for decades, and that suspicion that one cannot be loyal to one’s faith and one’s country simultaneously is part of what drives the continued suspicion of Jews in government. Jews and Catholics in America have a great deal in common, and one of the strongest ties between the two faiths is the animus we have faced throughout American history and politics.

This is, of course, a charge that Jewish Americans of all levels of observance should be on the lookout for and rally against. Writing for Haaretz, my friend Jonathan Tobin, editor in chief of the Jewish News Syndicate, challenged the Jewish community to soul-search about its role in the debate over Barrett and her nomination. He wrote in support of religious freedom, explaining, “Religious freedom for me but not for thee is not a sentiment that is consistent with the constitution or with the long-term interest of Jewish Americans. Liberal Jews may not support Barrett, but if they don’t criticize attempts to impose religious tests or counter contempt for her faith, they will be undermining the case for their rights, too.”

In a sane world, denouncing this kind of religious bias would be within the wheelhouse of mainstream organizations like the Anti-Defamation League and rabbinic groups, and yet, they have to date been silent. But we don’t need to wait for Jewish organizations to combat anti-religious bias in order to condemn it as a community or as individuals.

So as the confirmation fight heats up, the Jewish community needs to be clear about what modes of questioning and attack are and are not fair game. These lines of attack are setting what would be a dangerous precedent for anti-Semitic avenues of criticism for any future Jews seeking confirmation to any position before Congress. It isn’t just good karma to stand up for our Catholic countrymen — it serves as a bulwark against the same weapons being used against us.