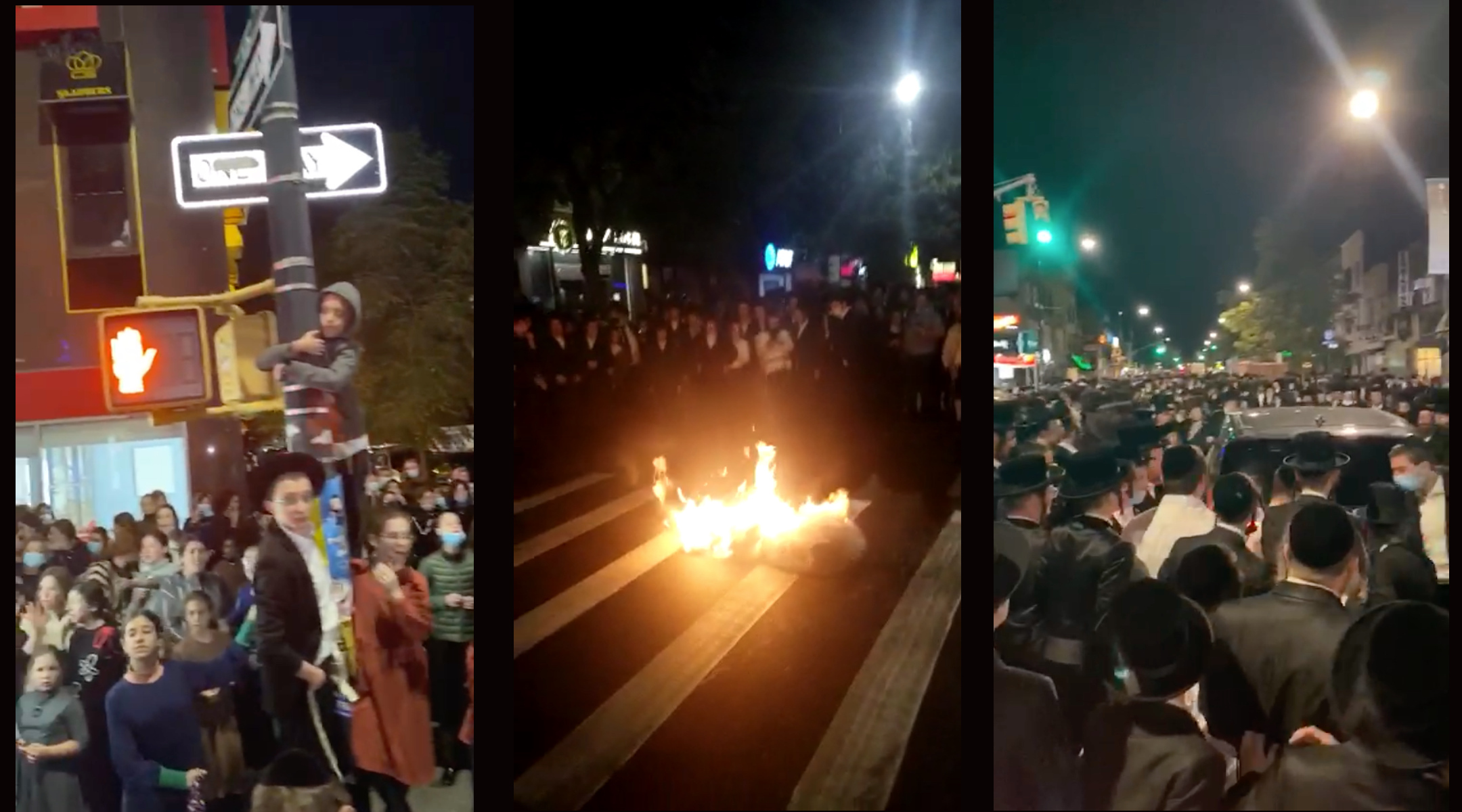 (JTA) – Protests by Orthodox Jews against New York’s crackdown on gatherings in their neighborhoods turned tense and at times violent Tuesday night as throngs of young men demonstrated in the streets of Borough Park.

The late-night protest in a heavily Orthodox area of Brooklyn took aim at new restrictions that would close schools, limit attendance at synagogues services and close nonessential businesses in areas with upticks in COVID-19.

The protestors set fire to a pile of masks, at one point surrounded a city bus that was moving through the area and at another ran a reporter out of the area.

In a particularly violent episode, one man — the brother of Mordy Getz, a well-known Orthodox businessman who was outspoken about the need for masks and social distancing earlier in the pandemic — was beaten so severely by protesters after he took a video of the scene that he was taken to the hospital. Onlookers could be heard calling him a “moser,” one who informs on fellow Jews to the authorities and who some Jewish legal authorities say can be killed as a result, an insult applied to his brother back in April, as he was placed on a stretcher to be taken to the hospital.

The protests laid bare the frustration felt by local Orthodox Jews who are now at the center of the first widespread resurgence of COVID in New York since the spring. Many in the community believe that city and state officials are unfairly targeting Orthodox Jews, who are already vulnerable to anti-Semitism, in their pandemic response. Local elected officials and community leaders on Tuesday vowed to resist the latest rules, through litigation and civil disobedience.

“We will not close,” radio host and local celebrity Heshy Tischler proclaimed to cheers from the assembled crowds. Later, he told protestors, “You are my soldiers. We are at war.”

Dov Hikind, the former state Assemblyman who is a leader in the community, said the form the protests took were regrettable.

“I’m ashamed of what happened,” Hikind said. “To raise your hand and touch another person, Jew or non-Jew, to injure someone and have them end up in the hospital, what a tragedy.”

He added, “If there would have been a protest last night organized by community leaders and elected officials where everyone was wearing a mask, then of course there’s no problem. … There’s nothing wrong with expressing yourself.”

Kalman Yeger, who represents Borough Park on the New York City Council, denounced the violence at the protest in a tweet late Wednesday morning. “I’m disgusted by the attack in the early morning hours on a member of our community,” he wrote. “There is never ever a reason to raise a hand to a fellow human. We are better than that. I hope the attackers realize how wrong this was. NYPD will investigate violent crimes in our community.”

The protests came in response to New York Gov. Andrew Cuomo’s announcement Tuesday afternoon of new restrictions on a large swath of Brooklyn that is experiencing an uptick in COVID cases. His announcement followed a similar one by New York City Mayor Bill de Blasio, who on Sunday, during the Jewish holiday of Sukkot when Orthodox Jews do not use cell phones or computers, said he would move to close schools on Wednesday, pending the governor’s approval. The governor then announced Monday that he would close the schools Tuesday. (Most Orthodox schools are in fact closed this week for Sukkot.)

“The governor informed Jewish community leaders in a conference call that synagogues in ‘red zones’ would be permitted to operate at 50%, and he requested community cooperation (which he was assured would happen,” they wrote, referencing a call Cuomo held with Orthodox leaders Tuesday before he announced the new restrictions.

“Outrageously, just hours later, Governor Cuomo announced a draconian return to restrictions that would shutter thousands of New York businesses and limit houses of worship to a maximum capacity of 10 (no matter the maximum capacity of the building).”

RELATED: Mob of Orthodox protesters in Brooklyn corners a journalist accused of informing on his community

A statement from Agudath Israel, an organization representing haredi Orthodox communities, also expressed frustration with the lack of notice given about the restrictions in a call earlier in the day and suggested the new rules might be unconstitutional.

“Governor Cuomo’s surprise mass closure announcement today, and limit of 10 individuals per house of worship in ‘red zones,’ is appalling to all people of religion and good faith,” they said.

They seemed to be considering the possibility of challenging the governor’s new restrictions in court. “Agudath Israel intends to explore all appropriate measures to undo this deeply offensive action,” they said. A federal judge issued an injunction blocking New York State from imposing stricter standards on indoor gatherings at religious services than those imposed on other gathering places, citing religious liberty concerns. Agudath Israel filed an amicus brief in that case.

The protesters in Borough Park were joined Tuesday night by Tischler and Yeger, who encouraged the crowd to stand up for religious freedom.

“We are not going to be deprived of the right that we have in America, like everybody else in America, the right to observe our religion,” he said in a video posted to Twitter by local news outlet BoroPark24. “I don’t care who in government thinks that they can stop us, they’re wrong. Let them try.”

Tischler also appeared later Tuesday night in Crown Heights, another heavily Orthodox Brooklyn neighborhood where there are no new restrictions but where de Blasio has identified a slight uptick in COVID test positivity rates. Tischler appeared at a Simchat Beit Hashoevah, a gathering on the holiday of Sukkot that is marked by singing and dancing, and addressed the crowd.

“We have a court order, we won, our schools and shuls are open, we will not close,” he said, seemingly referring to a court injunction over the summer issued by a federal judge that blocked New York State from imposing stricter rules on religious gatherings than in other indoor venues.

“And here’s the deal, I’m filing a new court order, I’m holding Cuomo and the idiot de Blasio in contempt,” he said. “We will civil disobedience…our amendments, our first amendments, our rights, we will not close our shuls Simchas Torah!”

At one point, protesters set fire to a pile of masks in the middle of a street.

There is a mask burning going on in Boro Park, Brooklyn. pic.twitter.com/HKebbFp3pr

And one photographer trying to capture the scene in Borough Park was videoed being chased and possibly assaulted by a crowd of Hasidic Jews.

Some reporter got swarmed and chased out by Jews in Borough Park tonight. What a scene. Wow. pic.twitter.com/m0WVTsOniT