Everything ‘potentially up for grabs’: What Jewish groups are watching for in this unusual Supreme Court session 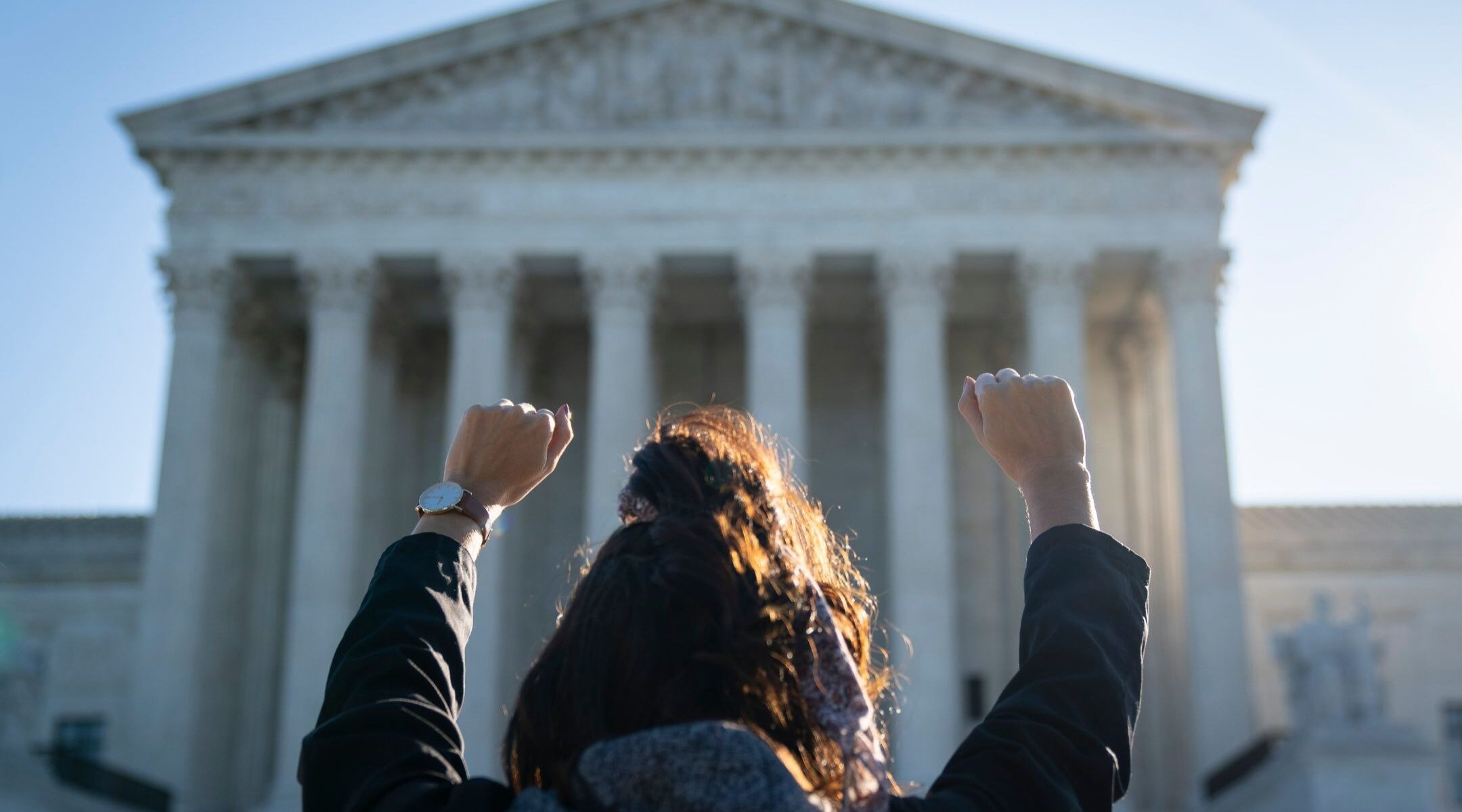 A woman with the pro-life organization Bound4Life raises her hands in prayer outside of the U.S. Supreme Court building, Oct. 5, 2020. (Drew Angerer/Getty Images)
Advertisement

WASHINGTON (JTA) — The uncertainty surrounding the makeup of the Supreme Court led to a quieter-than-normal kickoff for the court’s 2021 decision-making season. But even with the little known about what the country’s highest court will consider, it’s clear that multiple issues of interest to Jewish advocates will be on the docket.

A challenge to a 1990 ruling that has galvanized religious freedom advocates for years is before the court, as is a voting rights case. And if Amy Coney Barrett, President Donald Trump’s nominee to replace Ruth Bader Ginsberg, is confirmed, the list could quickly grow. The same could happen if Trump is elected to a second term next month.

For one thing, cases that draw a 4-4 tie automatically revert to the lower court’s ruling, making them a waste of the court’s time. The court is currently configured five conservatives to three liberals, but Chief Justice John Roberts, a conservative, occasionally swings to join the liberals.

“At this point, anything they haven’t taken could mean the court is not sure that they’re going to be able to get a majority until the ninth justice is confirmed,” said Marc Stern, the American Jewish Committee’s legal counsel and a veteran court watcher.

Because four justices must agree to hear a case, Barrett’s confirmation would also make it easier for some kinds of cases to be taken up.

“We know it only takes four justices to say, ‘Yea’ to take a case, and we know from Judge Amy Coney Barrett’s background that she’s hostile to the Affordable Care Act, certainly, and to Roe v. Wade, and precedent is definitely, she has stated, not a priority for her and so everything that we care about is potentially up for grabs,” said Jody Rabhan, the policy chief for the National Council of Jewish Women.

Here’s a glance at what Jewish groups are watching out for this coming session.

Adoption agencies and prospective foster parents face off in Philly

The rights of agencies that foster children versus the rights of their would-be parents also pits the American Jewish community’s Orthodox bodies against its civil rights groups.

In Fulton v. the City of Philadelphia, an adoption agency is challenging the city for cutting off funding because the agency would not place foster children with same-sex parents. The court will hear oral arguments on Nov. 4, the day after the election.

The Anti-Defamation League filed a friend of the court brief arguing that requiring Philadelphia to exempt religious agencies would roll back hard-fought discrimination protections.

“Requiring such an exception for Petitioners in this case would cause a flood of demands for similar exemptions, undermining the efficacy of those laws in safeguarding vulnerable members of the population, including religious minorities and members of other marginalized communities,” said the amicus brief, which cited cases in which Jewish parents have been denied the opportunity to foster children.

Joining the ADL on the amicus brief are an array of groups favoring church-state separations, including a who’s who of the liberal Jewish establishment: Bend the Arc, Jewish Women International, Keshet, the National Council of Jewish Women and T’ruah.

Steve Freeman, the ADL’s vice president of civil rights, said the adoption agency in the case was using religious freedom as a “sword and not a shield” to blunt the freedoms of others.

“‘Because we have our religious views, we can use taxpayer dollars to refuse to allow gay couples to adopt a foster child’ to me should be a non-starter,” he said.

Jewish groups lined up on the other side include the Orthodox Union and Agudath Israel of America. Both groups have signed onto amicus briefs on the side of the adoption agency, but not necessarily because they oppose placing foster children with same-sex couples.

“It’s not about what is the right or wrong approach for foster care and adoption in particular, it’s more about defending the longstanding principle that in American society and under the First Amendment, we should find ways to accommodate different religious groups and religious minorities and religious practices,” said Nathan Diament, the Orthodox Union’s Washington director.

Instead, an array of conservative religious groups see the Philadelphia case as a way into overturning a decision they have despised since it was made in 1990, Employment Division v. Smith, that upheld a drug rehabilitation clinic’s right to fire two Native American employees who smoked peyote as part of a religious ritual.

“As everybody said back in the early 90s, this was the Dred Scott case of religious freedom and it continues to be,” Rabbi Abba Cohen, Agudath Israel’s Washington director, referring to the notorious 19th-century decision that upheld slavery.

Smith, as it is commonly known, gave states wide — some would say total — latitude to reject religious exemptions to laws. The decision spurred the passage in 1993 of the Religious Freedom Restoration Act, but the Supreme Court subsequently ruled the law held only for the federal government and was unconstitutional when other entities were accused of not granting exemptions for religious beliefs.

Rabhan of NCJW said the particulars of the Philadelphia case were germane to why Jewish groups should uphold the city’s right to defund the adoption agency.

“Placing children in foster homes and using religion as a way in which to accept or reject otherwise qualified placements, based on religious beliefs, is core to who we are as an organization,” she said. 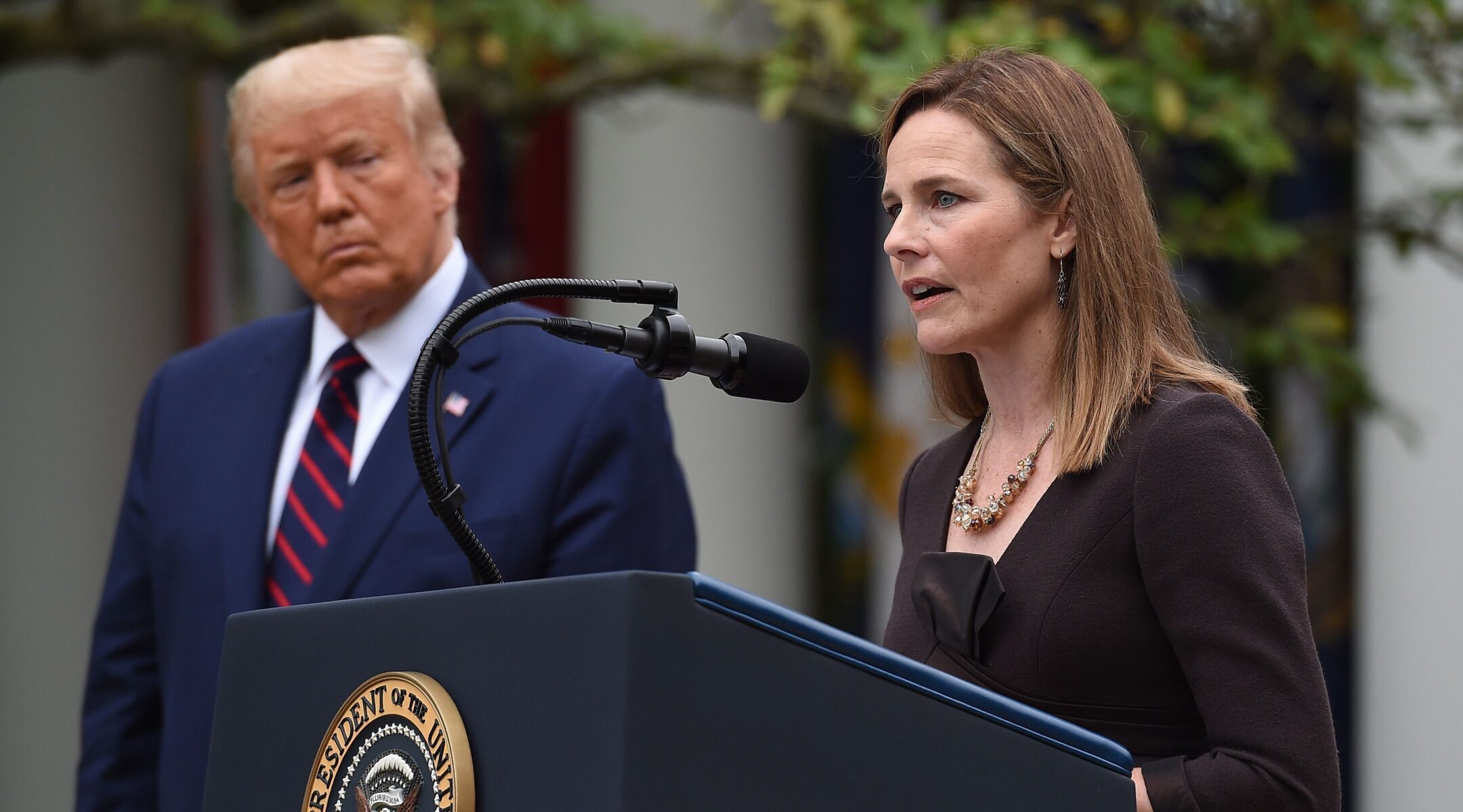 Judge Amy Coney Barrett speaks after being nominated to the Supreme Court by President Donald Trump in the Rose Garden of the White House, Sept. 26, 2020. (Oliver Douliery / AFP via Getty Images)

Orthodox Jewish and other religiously conservative groups would like to see discarded a 1977 decision that upheld the right of the now defunct Trans World Airlines to fire a man whose Christian sect forbade work on Saturday.

There are an array of cases in the lower courts that they hope the court will seize upon to overturn TWA v. Hardison, a decision written so broadly that Cohen says he advises people not to file lawsuits challenging employers who will not allow time off for the Jewish Sabbath or holy days.

“I tell people, your rights have been violated and you have a case but, you know, the law is so weak that to invest all that time and resources aggravation on a case that you don’t have much of a chance to win, I just can’t advise you with a clear conscience,” he said.

Considered most likely to rise to the Supremes’ docket is Dalberiste V. GLE Associates, the case of a Seventh Day Adventist who sought sabbaths off from his power plant employer.

Jewish civil liberties groups are pouring energy into voting access this year. They are also closely watching an Arizona voting rights case the court will consider this session in which the state has restricted what Trump and Republicans call “ballot harvesting,” collecting early ballots from voters.

Another voting rights case the court may take up is a law passed by Florida’s Republican-led legislature and enacted by its Republican governor that guts a 2018 ballot measure that allowed most former felons to vote. The law requires the former felons to pay outstanding fines and court fees, and critics have argued it amounts to an unconstitutional poll tax.

Religious liberty issues could get a hearing

The court this week heard oral arguments in Tanzin v. Tanvir, the case of three Muslim men who would not act as federal informants in their own community. The federal government, they allege, retaliated by placing them on no-fly lists. They are suing for damages under the Religious Freedom Restoration Act. Orthodox Jewish groups are paying attention to the case to see whether the beleaguered law they once hoped would ensure their freedoms will take another beating.

Stern said to also watch out for challenges to state orders enforcing coronavirus pandemic restrictions on houses of worship. The court has before this session twice rejected appeals from churches against the restrictions, but Justice Brett Kavanaugh’s forceful dissent in a Nevada case suggests that the court’s conservatives are itching to again take on the pandemic restrictions.

The potential for precedent-overturning cases is high

Perhaps the most prominent case that could be overturned if Barrett is confirmed is Roe. V. Wade, the 1973 decision that enshrined the right to abortion. Rabhan said there were at least 17 challenges to Roe v. Wade in lower courts that the Supreme Court could consider, and both she and the AJC’s Stern said they were certain that abortion would come up this session, and in a way that could once and for all overturn Roe v. Wade.

Already, the court has indicated an interest in revisiting the issue of marriage equality, enshrined only in 2015 by Obergefell v. Hodges and another case that upheld the right to same-sex marriage.

The justices this week allowed to proceed a lawsuit two gay couples brought against Kim Davis, a Kentucky clerk who refused to grant them marriage licenses. Davis wanted the lawsuit quashed. However, two of the court’s most conservative justices, Clarence Thomas and Samuel Alito, suggested that the court could soon consider a more appropriate case that would overturn Obergefell v. Hodges.

“This petition provides a stark reminder of the consequences of Oberfegell,” Thomas wrote. “By choosing to privilege a novel constitutional right over the religious liberty interests explicitly protected in the First Amendment, and by doing so undemocratically, the Court has created a problem that only it can fix.”

Rabhan said she heard a warning in Thomas’s statement.

“It was almost as if it was a dog whistle, to the Senate and certainly to Judge Barrett, that they too don’t prioritize precedent, and it’s frightening to think about rights that we have being taken away and it’s as easy as filling one seat to make that happen,” Rabhan said.