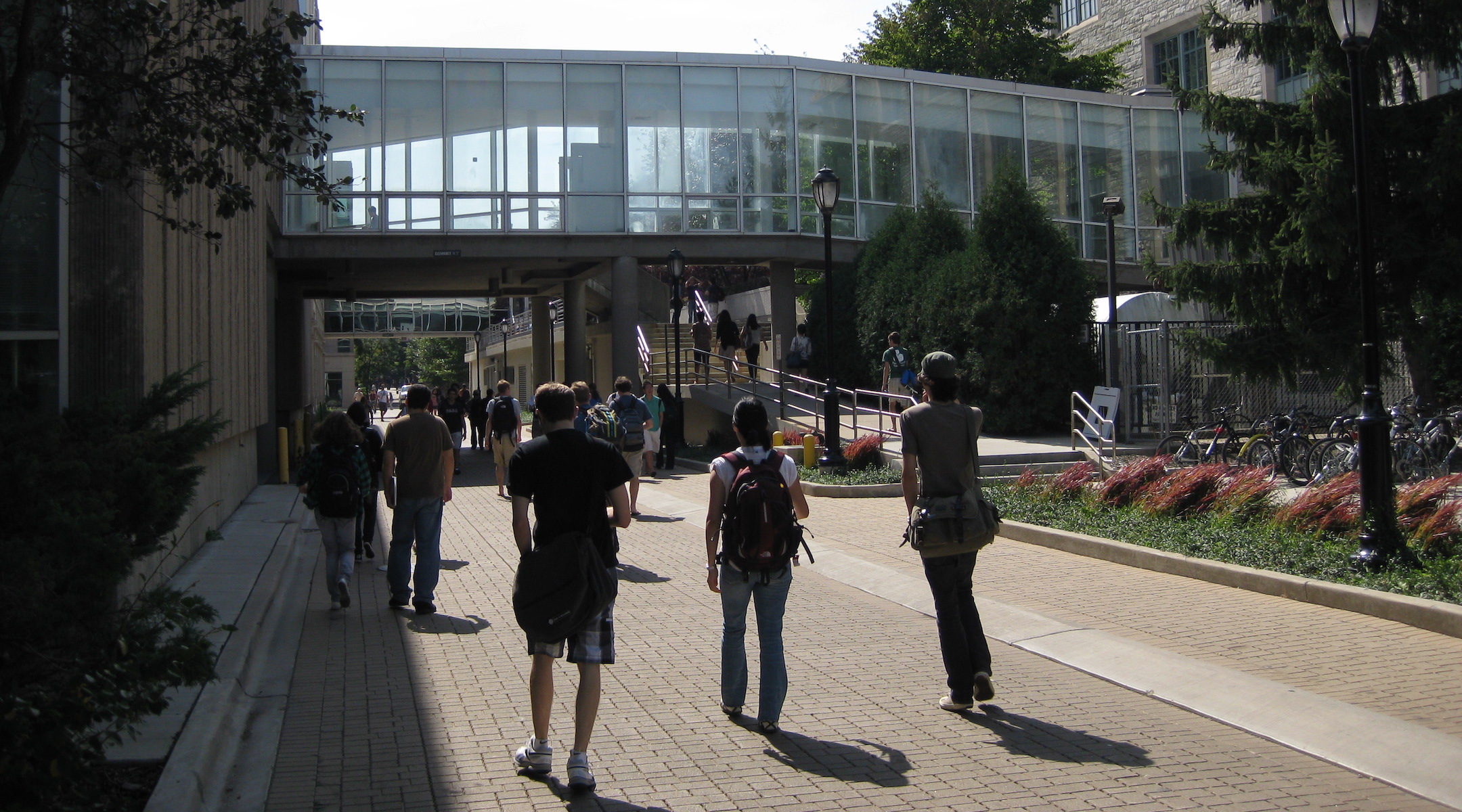 A view of Northwestern University's campus in 2010. (Wikimedia Commons)
Advertisement

The president, Morton Schapiro, said it could be. The activist group said it was not.

The ensuing debate has divided Northwestern’s campus just north of Chicago this week, with the school’s Hillel offering students the opportunity to reflect on the incident virtually in small groups Wednesday.

The activist group, called NU Community Not Cops, chanted “piggy Morty” outside Schapiro’s home over the weekend, according to an open letter Schapiro wrote on Monday. The group is calling for the abolition of the Northwestern University Police Department as part of a racial justice campaign.

Schapiro wrote that while he recognizes “the many injustices faced by Black and other marginalized groups,” he opposes disbanding the police and “condemn[s], in the strongest possible terms, the overstepping of the protesters.”

He noted the chant in particular.

“Many gathered outside my home this weekend into the early hours of the morning, chanting ‘f— you Morty’ and ‘piggy Morty,'” he wrote. “The latter comes dangerously close to a longstanding trope against observant Jews like myself. Whether it was done out of ignorance or out of anti-Semitism, it is completely unacceptable, and I ask them to consider how their parents and siblings would feel if a group came to their homes in the middle of the night to wake up their families with such vile and personal attacks.”

Associating Jews with pigs is a centuries-old anti-Semitic trope traditionally called the “Judensau,” a type of image that depicted Jews engaging in obscene acts with pigs.

In the context of anti-police protests in the United States, however, “pig” is commonly used as a derogatory term for police. The activist group wrote in a statement that it was using the term in that context, though it wrote, “Regardless of our intent, we apologize to our Jewish community, to individuals both inside and outside of the campaign who may have been harmed by language utilized at the protest.”

But the statement also emphasized the group’s opposition to Zionism and Israel, something Schapiro did not reference in his own letter and which was not a focus of the protest. While left-wing groups generally say anti-Zionism is distinct from anti-Semitism, mainstream Jewish organizations and anti-Semitism watchdogs caution that there is often significant overlap between the two, while Jewish groups on the right tend to treat them as one and the same.

The group wrote it condemns anti-Semitism, then included “Zionism” among a list of other ideologies it opposes.

“Because of the pervasive myths of colonialism and white supremacy, we find ourselves having to repeat: anti-Zionism is not anti-Semitism,” the group’s statement said. “We continue to stand in solidarity with Palestinian liberation by our shared virtue of abolition.”

The university’s Department of African American Studies also excoriated Schapiro’s letter in its own open letter, writing that he did not take concerns of racism and police violence seriously, and that he displayed “sour, small and moribund leadership.”

“[I]t is difficult to conceive of the level of ignorance, narcissism, or disingenuousness that would have to be present for you to personalize students referencing ‘pigs’ as an antisemitic slur, rather than to understand these students’ anger as a product of nightmarish experiences that you — as an adult who in fact wields a great deal of power — bear substantial responsibility to address,” the letter stated.

The debate has roiled the campus, where many students have convened even though most classes are taking place only online because of the pandemic. In a Facebook post Tuesday, the Hillel wrote that the discussion of anti-Semitism and anti-Zionism “can evoke strong emotions among our students and community, including fear, uncertainty, frustration, tension, and concern” and offered two chances to convene by Zoom with the campus rabbi.