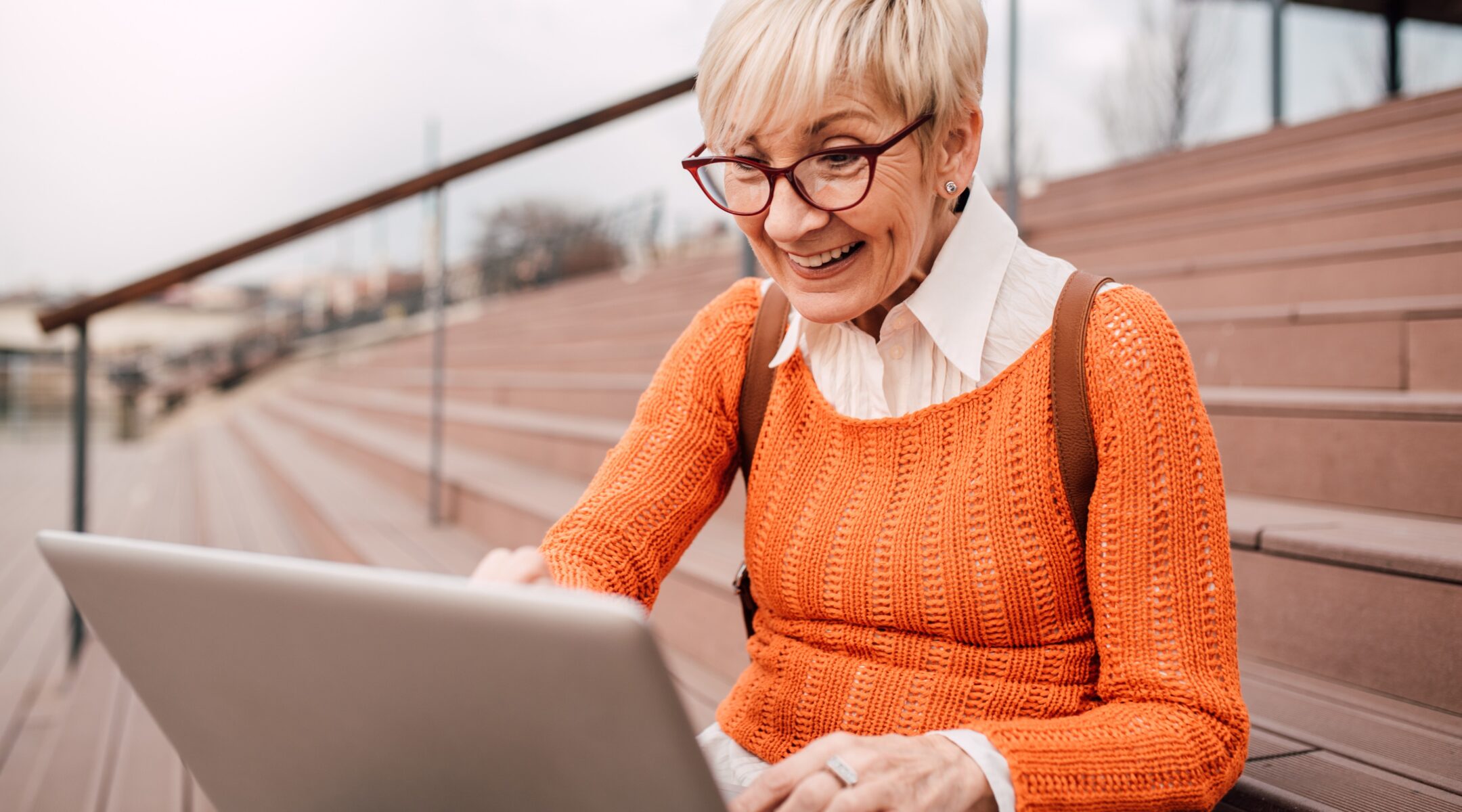 "We need to make a website where Jewish mothers can be the yentas they were meant to be," says Jeffrey Kaplan, founder of JustKibbitz.com. (RgStudio / Getty Images)
Advertisement

On a visit home to Fort Lauderdale back in 2013, Jeffrey Kaplan and his then-girlfriend watched as Kaplan’s mother pulled out her computer to show them the fake JDate profile she’d put together in a stealth effort to help Kaplan’s brother find love.

“She was worried about him not finding a Jewish girl to marry,” Kaplan said. At the time, he was a graduate student in entrepreneurship at the University of Florida.

“I remember the drive back to Gainesville, thinking to myself: When you see a person go to absurd lengths to solve a problem that should be easily solvable, there’s opportunity there,” he recalled. “It clicked for me: We need to make a website where Jewish mothers can be the yentas they were meant to be.”

That was the germ of the idea for JustKibbitz.com, a unique dating site where fathers, grandparents, friends and — yes — Jewish moms can channel their inner yentas by setting up profiles for their loved ones to try to find them a potential match. The site is meant for Jews of any stripe.

Kaplan, 34, and co-founder Mike Ovies launched the site earlier this year after winning $150,000 at an investment capital pitch contest in 2019. Both employees at a software development company, they spent a lot of their spare time over the last two and a half years doing market research into dating apps, millennial dating behavior, Jewish dating trends and more.

On JustKibbitz.com, the yentas do all the legwork — setting up profiles, scrolling through potential matches — and can even pay for the date in advance and determine where it will take place. (Of course, the target of their matchmaking must agree.)

“We put all the responsibility on the parents to know their kid and know what they want,” Kaplan said.

Pandemic-era social-distancing limitations notwithstanding, Kaplan thinks now is a great time to launch a dating app of this kind.

“Single millennials are spending 10 hours a week on dating apps. They’re online increasing their isolation in coronavirus,” Kaplan said. “So this app feels like a breath of fresh air, an alternative, letting someone who knows you best to set you up. The pressure is taken out.”

Noting the prepaid feature of the dating app, Kaplan said that surveys show that 92% of single millennials would go on a date set up by their parents if it was pre-paid. So far, hundreds of people have signed themselves and their children up, according to Kaplan, proving that the concept works.

Among them is Theresa Levy, a Jewish preschool director in Jacksonville, Florida. Eager to help her daughter find a partner, Levy recently started sussing out potential matches. She knows that some parents on the site may over-praise their kids and be blind to their shortcomings. Nevertheless she says she sees great merit in the approach JustKibbitz takes.

“It’s not going to be a booty call thing,” she said. “If you want that, go on Tinder. This is more of: ‘Hey, let’s meet and get to know each other and our parents know about it.’ There’s a little bit more accountability because parents are involved, and I like that for people like my daughter.” 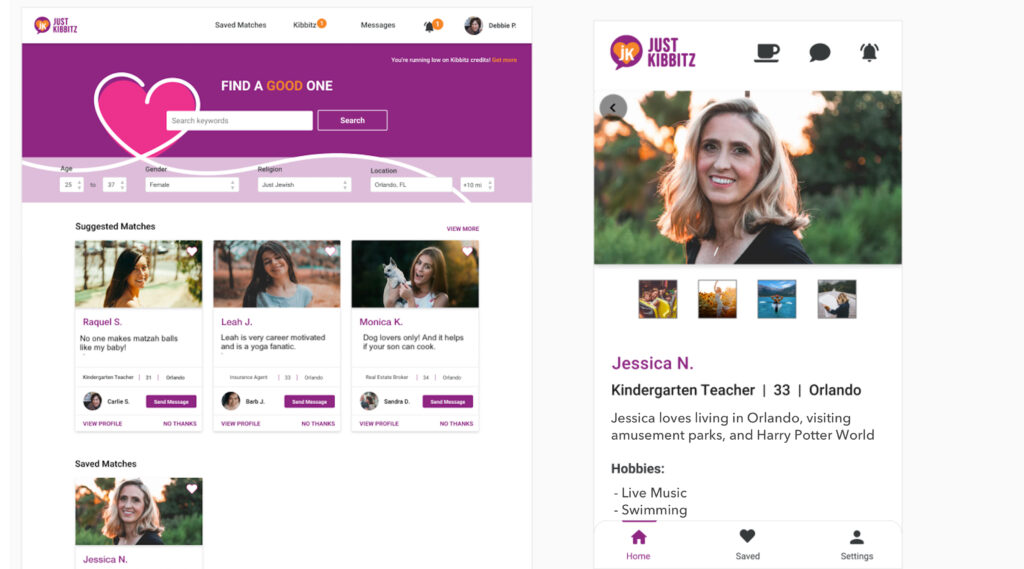 On JustKibbitz, parents play the role of matchmaker. (Courtesy of JustKibbitz.com)

A child’s willingness for their parents to set them up speaks volumes about the quality of their relationship, Levy said. “It’s a really strong vote of confidence,” she said. “If you have a strong relationship with your family, that’s got to spill over into other areas of their life.”

Her daughter, Marie-Claire Levy, 26, is game for her mother’s involvement.

“I’m kind of lazy,” said the younger Levy, who works at a Jewish nonprofit in New York. She learned of the site from a friend, thought it was funny (including the over-the-top promotional video), and told her own mother about it. “I don’t care if my mom signs up. It gives her something fun to do, and I’m not the best at putting myself out there.”

What JustKibbitz understands is that when you’re dating someone, or when you marry them, the relationship is larger than just two people, said Sheri Jacobs, a a Houston-based actor and author of “The Friendship Diet: Clean Out Your Fridge, Get Real With Yourself, and Fill Your Life With Meaningful Relationships That Last.”

Jacobs married someone whom she met on a dating site, and they had two sons before getting divorced.

“He looked great on paper,” she said of her ex-husband. “Had my mom been involved, I don’t think I would’ve married him. There were too many red flags.”

It’s “a nice hybrid of tradition and culture,” Jacobs added, “and simultaneously modernizing the dating experience, especially in our pandemic world.”

One of the things that makes JustKibbitz unique is its implicit recognition that the parents of those in a relationship will themselves forge a unique bond that may last a lifetime, Kaplan said. With JustKibbitz, they may create those bonds even before the couple does.

“No other culture has a word for ‘macheteniste’” — the Yiddish term for the relationship between two sets of in-laws, Kaplan observed. “Even when you’re dating, there’s this anxiety of ‘Are your parents going to like this person you’re bringing home?’ JustKibbitz eliminates that.”

This article was sponsored by and produced in partnership with JustKibbitz.com, the only Jewish dating site that helps someone you love find someone they'll love. This article was produced by JTA’s native content team.