Saying Kaddish helped me mourn my father. During the pandemic, it helped me build a community. 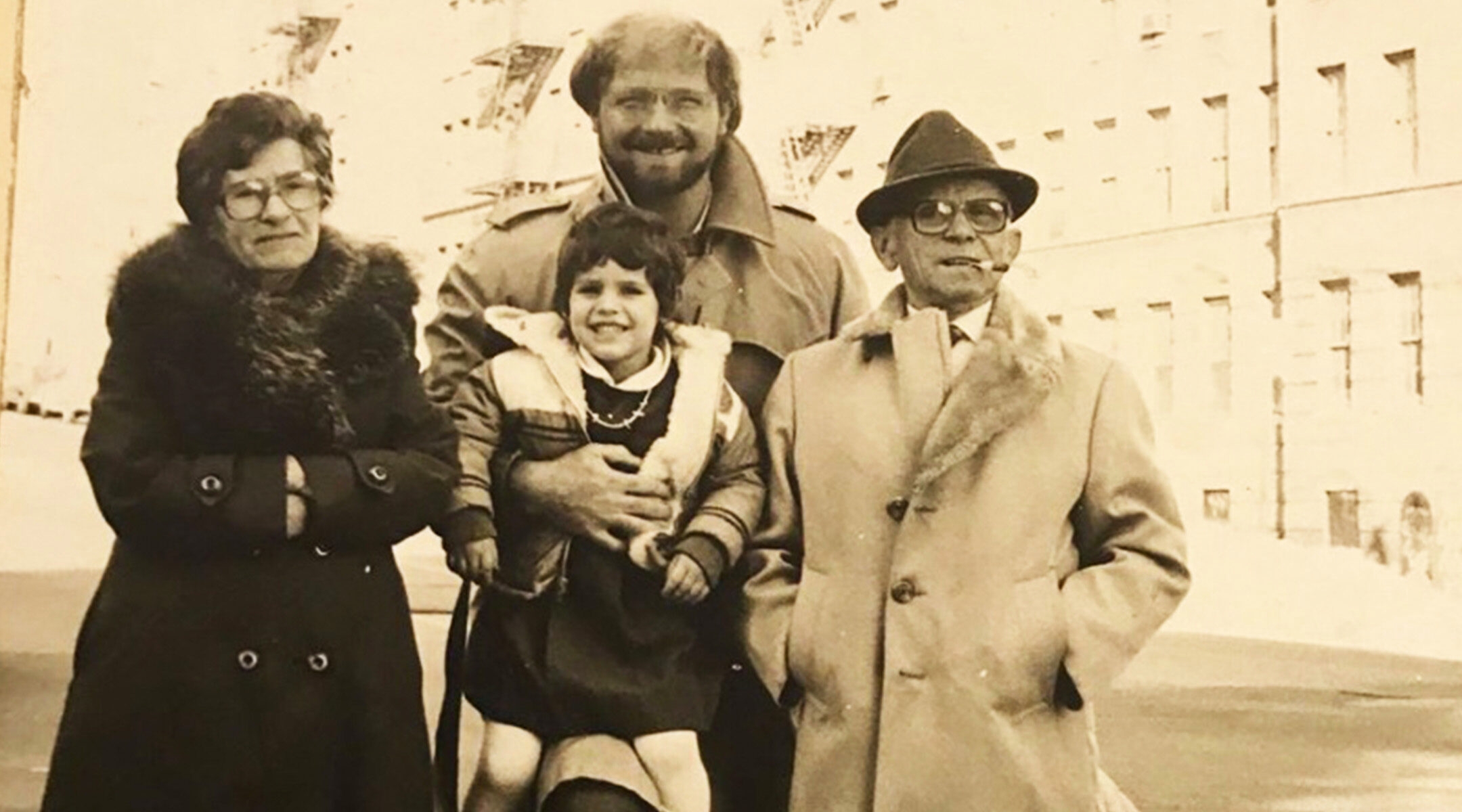 Daniela’s father holds her. Here he stands with his aunt, Ruksha, whose first husband died in an Uzbek jail, and her second husband, Henik, who survived Auschwitz. Now all are gone but Daniela. (Courtesy Daniela Gerson)
Advertisement

This piece was originally published on Modern Loss. It is republished here with permission.

Our toddlers bounded down Sunset Boulevard on a stunning late summer Los Angeles morning. I remember thinking, “This is too good; something is going to have to go wrong soon.”

And did it ever. At that moment prions, or proteins gone awry, were eating holes in my father’s brain. I first knew something was wrong a few weeks later when I spoke with him in an Uber in Los Angeles returning from the airport. Across the country, my father had driven himself to another airport. He kept telling me he had to get on a plane. But he had no flight scheduled. I finally talked him down by lying and saying my mother was sick and he needed to wait for her to pick him up.

Months before COVID, my family members streamed Rosh Hashanah services in a Washington, D.C., hospital; Yom Kippur, I spent in Baltimore with my father in another hospital where he was pumped with steroids and maddeningly failed basic cognition test after test where he was asked to draw a clock or tell us what day it was. The day before Halloween, on my children’s second birthday, the doctor from Johns Hopkins finally called to tell us he had a terrible diagnosis: Creutzfeldt-Jakob Disease. There was absolutely nothing we could do; nothing we could have done. He was going to die.

When we were in that twilight space knowing my father was going to die but not quite believing it, my brother asked me, “Are you going to do a Kaddish minyan for dad?” After my wife’s father passed away three years ago, we had created a tradition. It’s customary for Jews who have lost a close relative to say the Jewish mourner’s prayer, or Kaddish, during the year following the loss. But with no synagogue nearby, we instead invited people into our home once a week.

I knew we would do that for my dad, too. Our Kaddish minyan created a structure and an outlet for mourning my father-in-law. In the process, we built an incredible community when we needed it most. Acquaintances became intimate friends. One couple met at a Kaddish gathering.

My father died on Dec. 1. Two weeks later, I renewed the Google spreadsheet that had organized us for a year of Kaddish minyanim for my father-in-law, and sent out an email to friends inviting them to join us at our home. To pray in Jewish tradition you need 10 people. This is a value of the mourner’s prayer, in that it connects you to community at a time of private sorrow. Friends, Jewish and non-Jewish, crowded our home and brought home-baked bread, spiced nuts, and pan de guyaba to share.

On March 11, I sent out an email for our eighth Kaddish minyan since my father died, subject “Corona Shmorona.” I wrote, “We promise we will keep our social distance.” That night we sat outside, with chairs awkwardly spaced about 6 feet apart. By the next week even that was too much. We, and the rest of the country, moved to Zoom. Our home, which for weeks had swelled with people on Wednesday evenings, still felt physically barren. Online, the sound is erratic. My wife, who leads the service, thinks it works better with everyone on mute. I hate the feeling of singing alone and having others watch us.

But online, geography and traffic were no longer barriers to showing up. In Los Angeles, getting from the West Side to the East Side on a weekday night can be an hour-long schlep. Suddenly, my mother and sister in New Orleans could be there, and so, too, could my uncle and aunt in Berkeley.

It took two and a half weeks from the lockdown for someone who had lost a loved one to COVID to show up at minyan. Jeff’s father had died suddenly four days earlier. Like my father he had been born a refugee in 1945. He also grew up in New York City. He, too, emerged from the struggles of his parents successful and prolific. But Jeff’s dad died of heart failure while suffering from COVID, which made the last stage so different. Jeff could not fly across the country to be there with his mother, who, herself infected, stood alone as his father was lowered into the ground by people wearing hazmat suits. Instead of sitting shiva with his family, he sat on his floor in Los Angeles and stared through his screen into our Kaddish minyan.

One evening a neighbor sent a message. She had seen on NextDoor that someone who lived nearby was looking for a Jewish memorial candle. We invited him to say Kaddish. He stood outside in a park talking into his phone, and said this was a “God bomb.” He had been looking for an outlet to honor his aunt who had raised him and recently died.

Others showed up to say the mourning prayer with us: For a grandfather who died of COVID, for whom the funeral home arranged the hearse to drive by loved one’s homes. For a father who was a terrible father, but still was lost 10 days before. For a father lost 22 years ago, but still mourned. And for another deeply loved father who had died recently in Israel, much too far to fly during coronavirus.

Now, over half a year into the pandemic, we are approaching the last months of saying Kaddish. Our tradition is to pause during the service to talk about grief, often in the Jewish tradition. In early March our talks began to take on the tone of the loss we are all sharing, of liberty to go where we want and trust the air we breathe. While it is a place where we talk openly about death, it is also a place of comfort, and not only for the mourners. Friends, particularly those who are single, tell us this is a unique space to create connection. Isolated in their homes they lack an opportunity to meet new people and have conversations; after minyan ends, people sometimes stay on after we have left to talk about politics and history.

My father was born halfway through 13 years that his Polish parents spent as refugees during World War II. Sometimes, I wonder: How did they mourn the baby they lost on the run in Ukraine? Did they take time to say Kaddish for the brother-in-law who perished in an Uzbek jail when they failed to bribe him out in time? For their parents and siblings whom the Nazis murdered in gas chambers? Did saying these prayers also bring them comfort? Did it help them survive?

Some weeks I do not want to say Kaddish and speak into a screen; there are times when wrangling friends to make sure we have 10 feels like a burden. But then someone shows up unexpectedly and shares a loss miles and miles away and the connection of saying a prayer that has carried us through generations, through past plagues, through genocide, provides me with comfort, and even hope, for what will come next.

Daniela Gerson
is a an assistant professor of journalism at California State University, Northridge. She specializes in covering immigrant communities and participatory media, and she is the editor of Migratory Notes.
The views and opinions expressed in this article are those of the author and do not necessarily reflect the views of JTA or its parent company, 70 Faces Media.