In Pittsburgh, Tree of Life attack looms over Election Day 2020 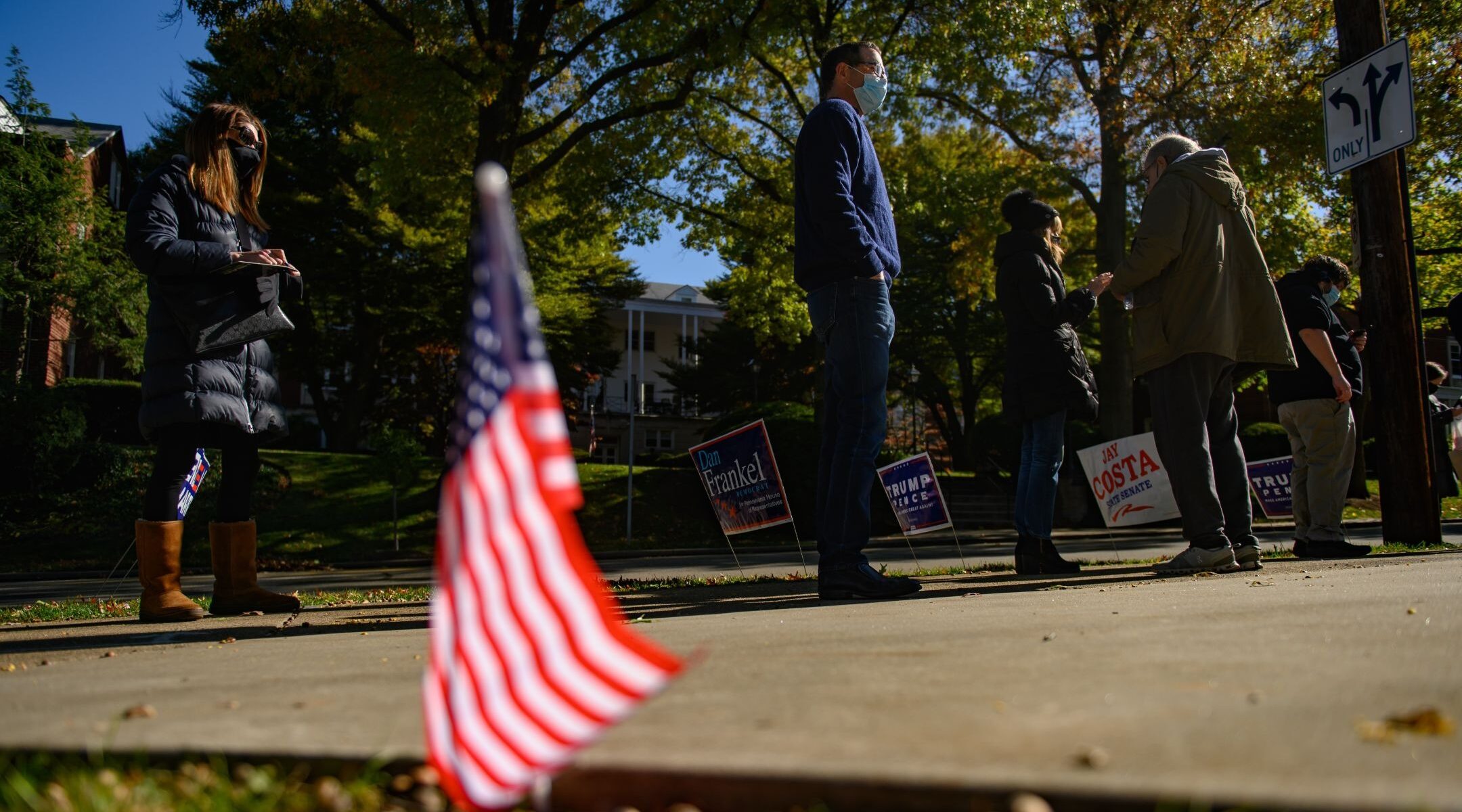 Two years ago, the JCC’s chief program officer recalls, this space was filled with an anguished crowd — families seeking news, comfort and childcare on a day that Jews in Pittsburgh speak about in euphemisms: the massacre of 11 worshippers at the Tree of Life Synagogue on Oct. 27, 2018.

On Tuesday, the JCC was the site of a very different sort of anguish as scores of Pittsburghers cast their votes here at the close of a bitterly contested presidential election.

The JCC was one of four Jewish sites in this city’s Squirrel Hill neighborhood to host polling places this year. And with security tightened amid concerns that self-styled poll-watchers, inspired by President Donald Trump’s claim that Democrats would try to steal the election, might disrupt the vote, the memories of 2018 came flooding back.

“We live with it,” said Rabbi Ron Symons, who runs the JCC’s Center for Loving Kindness and who was volunteering as a poll watcher in the bright chill outside the gym. “We don’t get past it.”

The Secure Community Network, the security arm of the North American Jewish community, and the local federation’s security director have toured the JCC and the three synagogues serving as polling stations in Squirrel Hill. Among the precautions instituted are barricades cutting off through-passages to separate voters from worshipers and staff in case an attacker comes in under the guise of being a voter.

“I’d rather not have the voting, but we have a civic responsibility,” said Daniel Wasserman, the rabbi at Shaare Torah, one of the voting venues. “We can’t let the bad guys win.”

Robert Pugar, 24, voted for Biden Tuesday at Temple Rodef Shalom, the stately Beaux-Arts building erected in 1901. The 2018 massacre was not the only reason he voted, the University of Pittsburgh student said, “but it had some weight. I felt I had a responsibility to my community.”

“It’s the discourse,” he said. “It’s been visceral for the last two years. It’s the din in which we operate.”

Falcone said he used to see anti-Semitism as isolated incidents, not indicative of a larger trend. But now, with each report of an attack, such as the one in which tombstones at a Jewish cemetery in Michigan were graffitied with Trump’s name this week, Falcone says “it’s more the state of the world.”

Two years after the attack, Squirrel Hill looks like America — not what it was before the pandemic, but getting there. Stores and cafes are for the most part reopened for business. And the streets were bustling Tuesday as voters streamed to the polls.

Poll watchers at all four stations reported a busy morning, with lines around the block. By midday, it’s quieter, but folks are still coming in and warmly greeting the station staff, whom they often know from shul.

This is literally Mr. Rogers’ neighborhood, where the children’s show host lived. The swimming pool scene in last year’s “A Beautiful Day in the Neighborhood,” the drama about Rogers, was in the JCC. And just about everyone there will tell you: Tom Hanks swam there.

Now, the pool is empty, although there will be limited swimming later in the day. The pandemic is more apparent indoors.

The space at the end of the corridor that two years ago was crowded with families seeking counseling has been converted into 10/27, which is how the JCC refers to the 10/27 Healing Partnership, the community project to help those impacted by the attack and other acts of hate-related trauma. There is a space for mindfulness, a place for teens to meet, a place for clinicians to meet one on one.

The pandemic has rendered the encounters virtual, save for twice-weekly meetings in a tent adjacent to the JCC. But the calls for help have intensified with the election looming, said Maggie Feinstein, the project director.

“There’s no doubt for our community that the events of 10/27 were related to people’s xenophobia and anti-Semitism,” Feinstein said. “And so, a lot of that conversation, as we’ve gotten closer to the election since 2018, when the attack happened, that has just intensified there’s been no sense of relief.”

Feinstein won’t say how she voted that morning, but she emphasized that she did it in person. A number of other voters said the same, saying they were spooked by Trump’s threats to invalidate mail-in voting.

“I decided that any, any sacrifice is needed,” she said. “I just had to be there.”

Michael Louik, who lives two blocks away from Tree of Life, recalled his first act of mourning, two days after the attack. “I walked up just to be there,” he said. “I wore a t-shirt, the only word on it was vote.”

He blamed the attack in part on Trump, who peddled the same myth of a migrant “invasion” that fueled the attacker. “There may be feelings, thoughts, and ideologies that existed for a long time,” said Louik, 78, a retired attorney. “But the poison came from the top. He encouraged them.”

There is a longing for normalcy in Pittsburgh. It is the national longing for the before times, before the pandemic, before isolation. Shawn Brokos, the federation’s security director, touring the JCC, spotted a handful of toddlers scampering through a sunny play area, under supervision to make sure they remain socially distant. “So cute!” she said. 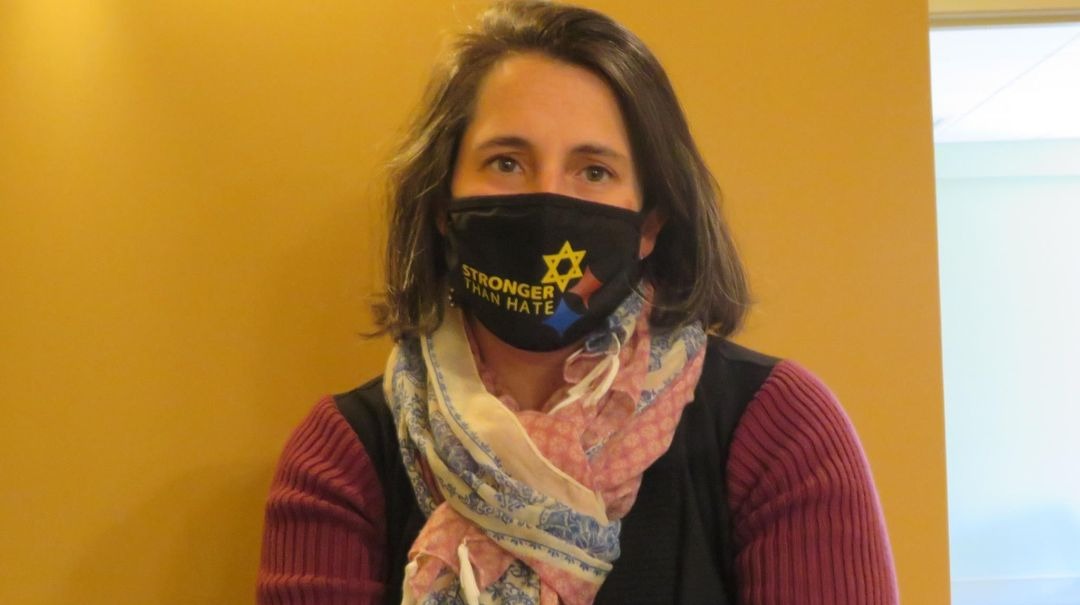 Maggie Feinstein, who directs the 10/27 Healing Partnership at the Pittsburgh Jewish Community Center, poses in the center on Nov. 3 2020. (Ron Kampeas)

Feinstein looks over the pile of soft beige blocks in the 10/27 center, where teens before the pandemic got together to deal with their trauma.

“My job is so bizarre,” she said, stroking the upholstery, reviewing the history of the toddler play area turned into a trauma recovery space.

“When I was 4 years old, I did ceramics right where we are sitting right now,” said Feinstein, who is 40. “And then as a parent, I brought my kid here for kindermusik right where we’re sitting right now. And then after the shooting, this is where the FBI came. And then after the FBI left, now we’ve made it into a sort of a therapeutic community where I work.”

“The four outside walls of this building haven’t changed and everything inside changes all the time,” she said.