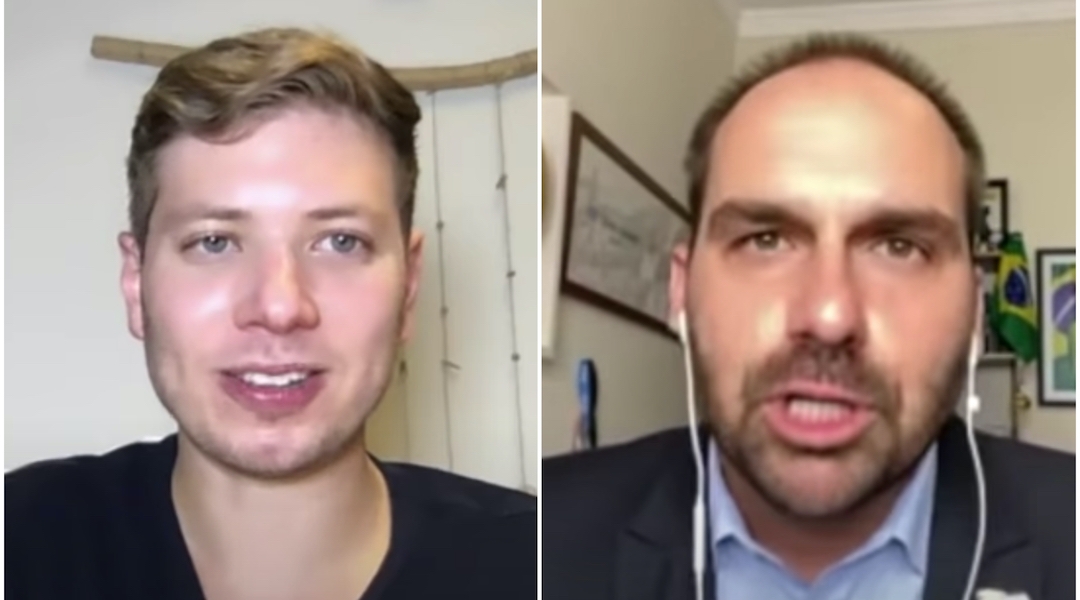 RIO DE JANEIRO (JTA) — Riding the close political ties between their fathers, Yair Netanyahu tapped Eduardo Bolsonaro, the son of Brazilian President Jair Bolsonaro, as his guest for the first episode of his new podcast, “The Yair Netanyahu Show.”

Released on Sunday, the show, which involves “triggering liberals” and “interviewing the biggest names” among its descriptors, is available on Spotify, YouTube and other platforms.

“The media in Israel and in the United States is very progressive, pro-socialism, anti-nationalism,” Netanyahu says in the opening episode.

“I was called by the left so many times a Nazi, but all of my grandfather’s family from Poland was murdered by the Nazis. This is what they call everyone who is conservative and disagrees with them,” he added, in nearly flawless English.

Netanyahu, 29, served in the Israel Defense Forces spokesperson’s unit and has emerged as a fierce right-wing defender of his father, particularly on social media. In 2018, Facebook briefly suspended him from the platform for hate speech after a series of posts about Muslims.

Bolsonaro, 36, is much the same, commanding 2 million followers on Twitter and more than 3 million on Instagram, platforms he uses to fire back hard at his right-wing father’s critics. The younger Bolsonaro is also a popular elected official in Brazil, having won re-election in 2018 to a second term as a federal lawmaker with over 1.8 million votes, the most in the country’s history. He has worked with Steve Bannon’s “The Movement,” a group that works to promote right-wing populism in Europe and beyond.

The interview was full of mutual compliments about their fathers’ governments and their shared dislike of the media and contempt for the left.

“Some left-wingers in Brazil started a soft and long-term movement to take control of universities and now, after some decades, they have almost full control of the press, unions and other segments of the society,” Bolsonaro said during the hour-long podcast.

Netanyahu expressed a similar sentiment about the left in Israel.

“In Israel, the most radical left, that represents maybe 5 or 10% of the country, is very socialist, very anti-national, very anti-religion, anti-Judaism,” Netanyahu said. “They took control of almost 100% of the mainstream media and academia. They are brainwashing, indoctrinating.”

Bolsonaro was reportedly close to being nominated by his father as Brazil’s ambassador to the United States last year. Among his credentials, his father told reporters, was that he speaks English and is “friends with Donald Trump’s children.” But those aspirations were frustrated after prosecutors argued in court papers that he was not qualified to fill the country’s most prestigious diplomatic post.

Before his election to Congress, the younger Bolsonaro had worked as a low-ranking federal police officer and the only international experience listed on his resume was a year-long work-exchange program in the United States, which included a brief stint behind the counter at a Popeyes chicken restaurant in Maine.

In late 2018, Yair Netanyahu accompanied his father on the first visit of a sitting Israeli prime minister to Brazil. During the trip, Netanyahu took helicopter and yacht rides at a pristine island off the coast of Rio with Bolsonaro and his brothers, who have been photographed several times wearing T-shirts with messages in Hebrew.

Bolsonaro had earlier promised Jared Kushner, Trump’s son-in-law and senior advisor, that Brazil would move its embassy to Jerusalem. However, Brazil has only opened a trade office in the city.

Jair Bolsonaro, often referred to as “Brazil’s Trump,” is one of the world leaders closest to Netanyahu and his family. The Israeli prime minister gained pop star status among Brazilians during a five-day visit to Brazil to attend Bolsonaro’s inauguration on Jan. 1, 2019.

“Yedid gadol shel Yisrael” — Hebrew for “great friend of Israel” — Benjanim Netanyahu said of Eduardo Bolsonaro at a synagogue in Rio during the visit.