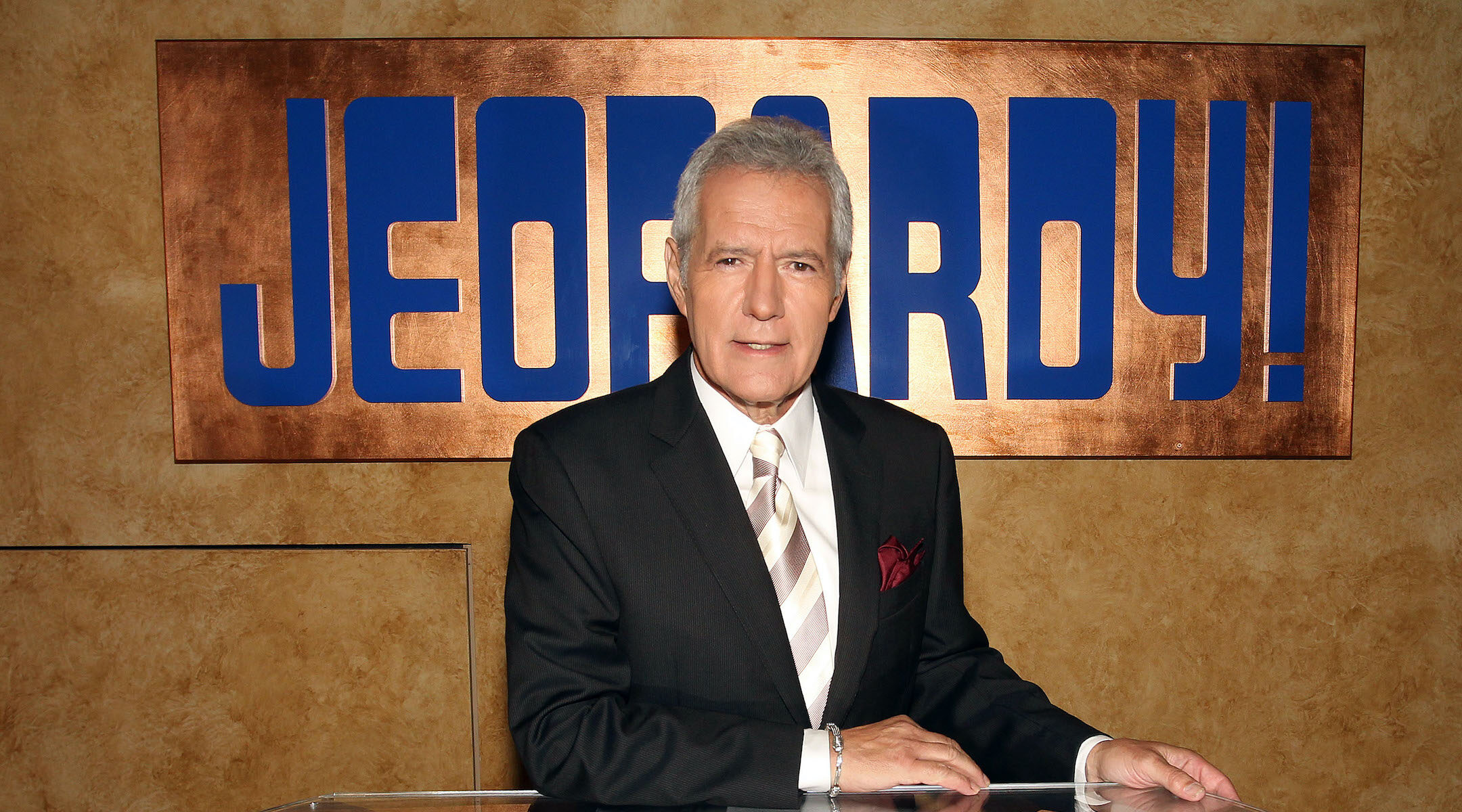 In his 36 years as host of the immensely popular game show, Trebek encountered his share of Jewish moments. We’ve rounded up a few especially notable ones from the last decade here.

2011: A rabbi appears on her ordination anniversary

Rabbi Joyce Newmark, a Conservative rabbi from Teaneck, New Jersey, won $29,200 during her appearance on the show, which aired on the 20th anniversary of her ordination. Trebek congratulated her on the milestone and asked her about her experience as a woman rabbi. See Newmark’s witty response, which Trebek deemed a “good answer,” in this clip.

A clue in the category “Service organizations” asked players to name “this Jewish club whose name means ‘children of the covenant.'” That might have stumped many, but one of the contestants that day was Joey Gutmann, at the time a law student, who was wearing a kippah. He got it right and won the $800.

Talia Lavin, formerly a JTA intern and nowadays an author who writes about online anti-Semitism and white supremacy, had a particularly memorable appearance on the show — for “Saturday Night Live” fans, at least. Lavin didn’t know the answer to a question about a song in a movie, so she wrote in “What is the love ballad of turd ferguson ps hi mom.”

“SNL” fans will remember part of the phrase from the show’s famed “Celebrity Jeopardy” sketches. Burt Reynolds, played by Norm McDonald, took joy in getting Will Ferrell’s Alex Trebek to say his name was Turd Ferguson.

Lavin’s moment was the first time anyone had tricked the real Trebek into saying the comic name.

A contestant with a pretty Jewish name became a sensation by trolling Trebek with some of his responses (such as “You aren’t rid of me yet, Trebek”). Vanity Fair called Buzzy Cohen “either the game show’s latest young, charismatic savior or an obnoxious millennial scourge we as a society did nothing to deserve.” He went on to win more than $164,603 over nine episodes and returned the following year to win the 2017 Tournament of Champions. Cohen’s Jewish cred extends to his love of deli, his marriage to a rabbi’s daughter and his upbringing in a Conservadox synagogue, as detailed in this interview with the now-defunct Arq website.

“Absolutely heartbreaking to lose someone who meant so much to so many. Even if this show hadn’t changed my life in so many ways, this loss would be immeasurable,” Cohen tweeted Sunday, before posting a picture of himself hugging Trebek with the words, “Gonna miss you.”

In her first appearance on the show, Alexandra Henkoff and the other contestants left the category “Luther’s 95 Theses” for almost last in the first round. After she revealed the first clue, Henkoff seemed stuck but answered, “Who is Jesus?” When she learned she was right, she sighed with relief, then confessed, “I’m Jewish,” to laughs from her fellow contestants, the audience and Trebek, who said, “That’s no excuse.” Henkoff went on to win $17,300 that day and return for one more game.

2019: A former rabbi contestant holds an interfaith service for Trebek

After Reform Rabbi Geoffrey Mitelman heard the news about Trebek’s cancer diagnosis last year, he quickly hatched a plan for the show host: an interfaith “prayer service, for hope and healing and strength,” he told the New York Jewish Week.

In all, Jewish and Christian clergy representing “at least 11 different religious traditions” participated, reading prayers, and other participants sang songs. People from across the country tuned in via Zoom.

It shouldn’t have come as a big surprise: Mitelman — who appeared on the show in 2016 and runs a site called Sinai and Synapses, about the ties between religion and science — wrote an article on his “Jewish Approach to Being on Jeopardy!”

“[F]ocus on what you can control, and ignore the rest,” Mitelman wrote. “That idea was, in fact, the crux of my application to rabbinical school.”

Meggie Kwait, a teacher at Beit Rabban Day School in New York City, was part of this year’s Teachers Tournament, filmed shortly before the coronavirus pandemic descended on the United States. We interviewed Kwait about her experience and why she decided to wager $18 on a day when she couldn’t lose. (“That was when all the Jews realized I was Jewish,” she told JTA.) Here’s the official “Jeopardy!” interview with Kwait about her appearance and approach to teaching.