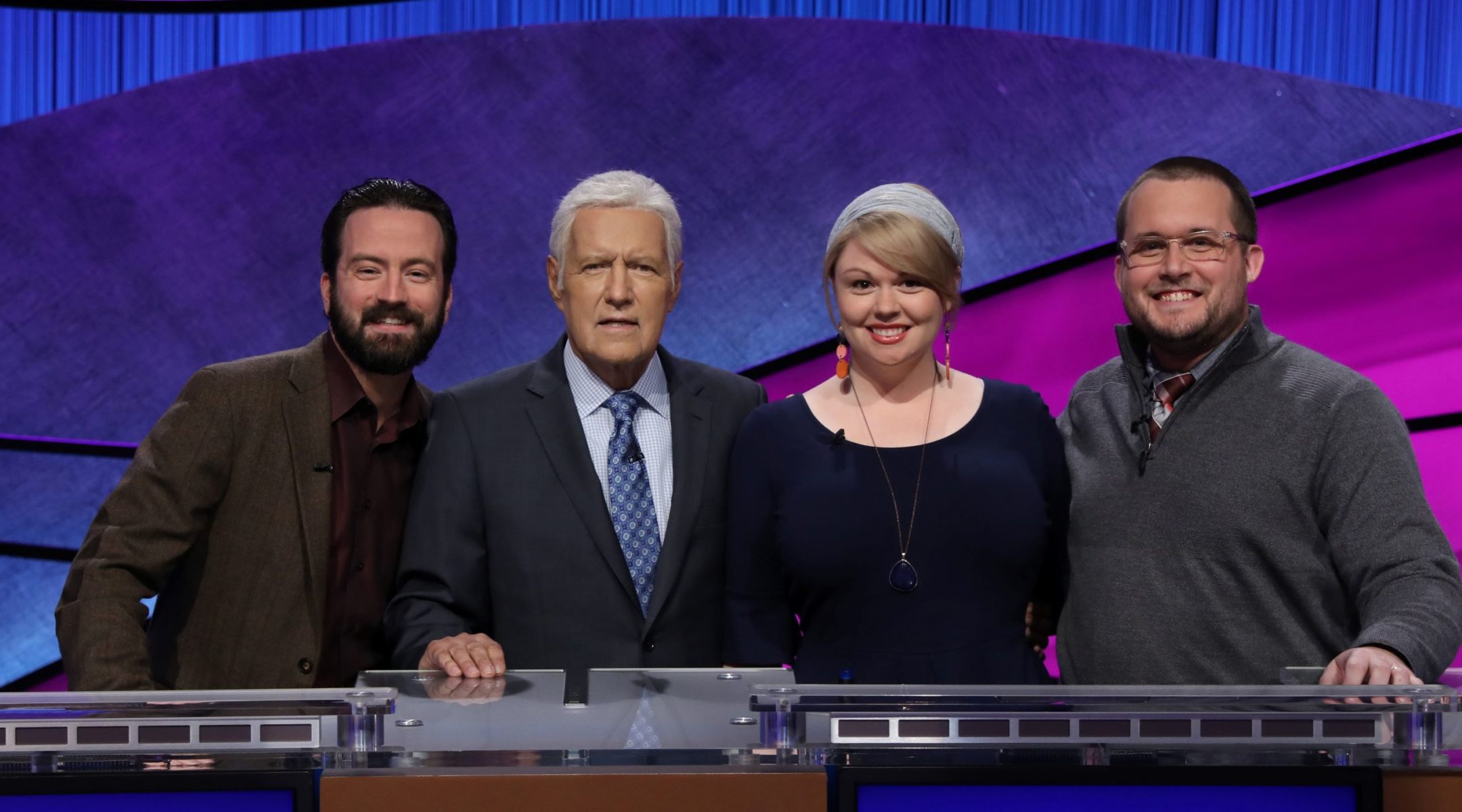 Meggie Kwait, a Jewish day school teacher from New York City, won $50,000 on the recent "Jeopardy!" educators tournament. She is seen with host Alex Trebek, second from left, and the other two finalists. (Courtesy of Jeopardy Productions Inc.)
Advertisement

(JTA) — Astute viewers could find plenty of signs during the recent “Jeopardy!” Teachers Tournament that one leading contestant had some Jewish bona fides.

There was the fact that Meggie Kwait teaches at Beit Rabban Day School, a Jewish school on Manhattan’s Upper West Side. There was her covered hair, rare among game-show contestants but more common among observant Jewish women. And then there was her bet for the final question on a day when she was so far ahead she couldn’t lose.

“Yes, I wagered $18,” Kwait told the Jewish Telegraphic Agency. ”That was when all the Jews realized I was Jewish.”

Kwait, a humanities teacher who trained as a musician and spent some time in rabbinical school before landing in the classroom, was one of 14 contestants during the trivia show’s two-week tournament just for educators. She won two rounds to make it into the two-game final, where she finished second to a music teacher from Michigan. The experience netted her $50,000 in prize money, bragging rights and, she says, new friends she anticipates keeping for life.

We talked to Kwait about her “Jeopardy!” experience, her favorite lessons to teach and which of her answers has been immortalized in a gif. This interview has been edited for length and clarity.

JTA: How did you end up on Jeopardy and what was the experience like?

Kwait: I was never a big “Jeopardy!” watcher or fan, but my spouse is. We have very different TV tastes and we were looking for something to watch, and there was a “Jeopardy!” collection on Netflix. After a while he looked at me and said you’re really good, you should try out. So I registered, took the test online, was invited to audition in Boston, sat in the pool for 18 months, and then they asked me to come on the Teachers Tournament.

I would describe myself as a generalist. I have this varied background, and also a memory for trivia and minutiae. I knew I could answer the questions, but also knew that most of being successful is not having the right answer, but having the confidence to buzz in and the timing.

People often say that men are better than women on the show. And if you look at the people who’ve had long streaks, or the amount people win, it would be easy to draw that conclusion. That was something I was really conscious of, being the only woman in the finals. I tried to be aggressive in my wagering and buzz in even if I didn’t know the answer. I hope we see more women take the test and see those perceptions dissipate.

It was incredible. There were 14 teachers in the tournament. I did not anticipate that the best part of participating would be meeting all the other teachers. They were all really incredible, smart, dedicated educators. It’s not every day that you get to hang out with a bunch of other nerds who have the same job as you.

Filming concluded before the coronavirus pandemic. What has your school year been like since?

Pretty immediately after the tournament, after we finished filming, the shelter-in-place orders came down [because of the coronavirus pandemic]. In New York there was only another week before our schools closed. So [the teachers from the tournament] have been sharing tips and tricks for how to use Zoom and providing moral support and encouraging each other.

My school did a really good job. We had a full day before we started doing remote learning where we came together and talked about strategies and techniques. Overall, while there is something about face-to-face and in-the-same-room instruction that cannot be replicated, in many ways it’s the same set of skills: keeping kids engaged, being interested in the material yourself, figuring out how to teach in a variety of ways.

My background is in music, and it’s always important to incorporate the arts as an additional way for kids to access content and also their passions. When I teach the medieval period in sixth-grade humanities, we set up a scriptorium where students create their own Hebrew illuminated manuscripts. When I teach ancient Greece, they make up battle songs for their city-states.

A lot of people said I was engaging as they watched the show. I try to do the same thing in the classroom.

What other reactions have you gotten from “Jeopardy!” viewers?

I got a lot of positive feedback, but also political blowback about my reaction to “Magic Mike Pompeo.” [Kwait correctly offered that answer to the clue “2012 male stripper cinematic saga that went on to be our 70th Secretary of State.”] I was happy I got it right — but then I visualized it. I really think I would have had the same reaction about, like, John Kerry.

At any rate, I made it into a gif that people are using. Clearly I have an expressive face.

“Jeopardy!” viewers created a gif showing one of Meggie Kwait’s reactions during the show.

Some people were really resourceful and found my school address. It’s been everybody from a 79-year-old grandmother saying how proud they were, to people saying I was a Jewish educator myself for 30 years and it’s great seeing a day school teacher up there, to teenagers saying I wish you were my teacher.

It’s been really nice hearing from people — these have been a difficult couple of weeks. It felt strange posting about something that could be considered frivolous, but I’ve heard from people saying thank you for bringing a little bit of light to this dark time.

What were the Jewish highlights of your experience?

There was another Jewish teacher in the tournament [Lauren Schneider Lipton, who teaches health in Seattle]. It turned out we had mutual friends but we hadn’t met each other. When we were watching the other games, if there was a Bible category or Israel, we’d look at each other and think, oh I knew that one, which was a neat moment of connection.

Also, my school did a virtual watch party for three of the four games, and several teachers said it was incredible to hear me say Beit Rabban, the day school’s name, on the second day of the finals. Giving visibility for our teeny, tiny day school — that was exciting.

And then, before the tournament started, a producer came and told us, “We think really long and hard about adding special events to ‘Jeopardy!’ When we decided to add the Teachers Tournament, it was not because teachers can’t compete in the regular season — they do — but because we don’t do enough in this country to honor educators. You are some of the most important people in our society, and we are humbled and grateful that we can bring you to a national stage that way.”

I was so touched by that. It was not a way I had thought of the tournament being framed. In the Jewish world we very much value education and erudition, and it felt like a Jewish value being expressed for the country at large. It was a beautiful moment.

What are your takeaways from the experience — and what are you going to do with the $50,000?

I live in New York City, so I have no doubt that we will be able to find a place for that money to be spent. I had planned to travel this summer with some of the winnings, but it looks like that’s out for now. I was going to go to Italy — I guess that can wait.

My overriding memory of it is just exhilaration and excitement. Some people have said, “Oh, I’m so sad you lost,” but I really don’t feel that way. I know it sounds cheesy, but I felt like I was winning from the moment I got there.