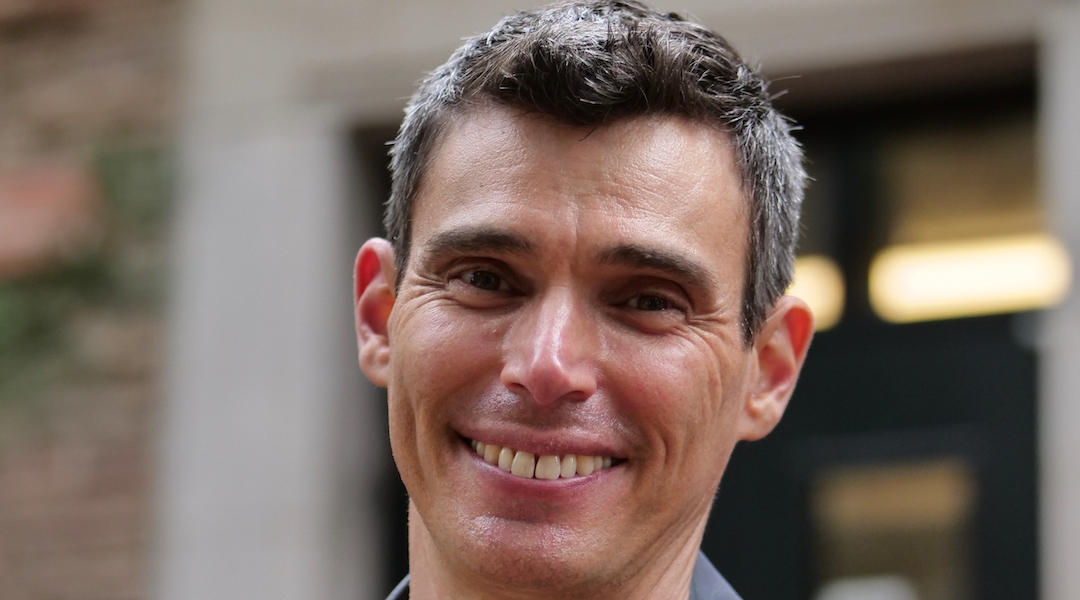 (JTA) — In a packed conference room at a downtown Boston hotel in 2015, David Shneer, a Jewish studies professor at the University of Colorado, stood before his colleagues in the Association for Jewish Studies and began belting out Yiddish cabaret songs.

Dressed in black with a red tie and bowler hat, Shneer and his collaborator, Bay Area singer Jewlia Eisenberg, were doing their first performance of “Art is My Weapon,” a collection of songs from the repertoire of Lin Jaldati, a Jewish singer born Rebekka Brilleslijper in the Netherlands who survived the Holocaust to become an unlikely diva of Yiddish music in communist East Germany.

The pair would go on to perform Jaldati’s music at synagogues and universities across the country, with Shneer narrating the singer’s incredible life story to rapt audiences. But those who were there for that first performance remember Shneer enthralling a room of academics unaccustomed to seeing one of their own present their research findings in musical form.

“My memory of it was the room was packed,” said Josh Lambert, a professor of English and Jewish studies at Wellesley College. “There’s not a lot of scholars I can point to with that kind of energy, with that kind of bridging the gap between serious, rigorous scholarly work and the kind of generic warm and creative expression of all that.”

Shneer, who died last week at 48 following a decade-long battle with brain cancer, was by all accounts an unconventional academic.

His scholarly pursuits were focused largely on Russian Jewish history, but he had a particular interest in the arts and visual culture, cultivating a raft of young artists, some with radical tendencies. His 2011 book, “Through Soviet Jewish Eyes,” was a National Jewish Book Award finalist that examined the Jewish influences on two dozen Soviet Jewish photographers. His latest book, “Grief: The Biography of a Holocaust Photograph,” describes how an iconic 1942 photo of an old woman grieving over a body felled in battle became emblematic of Soviet aesthetics and the formation of Holocaust memory.

Shneer was an activist, too, canvassing for Democratic presidential candidates in swing states and co-founding Jewish Mosaic, the Jewish LGBTQ organization that later merged with Keshet, where he served on the board. He was unusually solicitous of younger scholars, taking time to provide mentorship and guidance. And he had that rare ability to make complex ideas understandable to a general audience.

“We recognized immediately that he had a gift,” said Aaron Lansky, the founder of the Yiddish Book Center in Amherst, Massachusetts, where Shneer ran a summer Yiddish program for several years. “He knew how to explain things that a broader audience can understand. The students loved him. You get those reviews at the end, and they were just off the charts.”

Shneer’s death on Nov. 4 prompted an outpouring of online remembrances. The word “mensch” came up repeatedly.

“He was always kind and generous, but not in a boring way,” said Eisenberg, who met Shneer as an undergraduate at the University of California, Berkeley, when the two were working on the school’s student travel guide. “It was never boring with him. It wasn’t like a goody two-shoes or something. It was just his disposition to be that way. And that’s different than most people. He wasn’t trying to be brilliant, generous, compassionate. He wasn’t trying to do any of that. He just was that.”

The author Douglas Rushkoff met Shneer in 2003 when Rushkoff came to Denver while touring for his book “Nothing Sacred,” which argues that the modern Jewish fixation on recruiting lapsed Jews to the fold is a bastardization of Judaism’s fundamental principles.

“I remember David not completely agreeing with my take, but being thrilled to discuss it, nonetheless,” Rushkoff told the Jewish Telegraphic Agency. “He was practicing the next evolution of Jewish argumentation — an unconditional quality of love and respect and fun served as the foundation. And that created the safety to make any discussion possible.”

In 2016, Eisenberg and Shneer were in Pennsylvania for a performance on the day that Donald Trump upset Hillary Clinton to win the presidential election. Jaldati’s anti-fascist music suddenly took on a shockingly contemporary resonance.

She added: “He’s not like all dressed in black with a balaclava on his face, but he was down for the revolution.”

Shneer received his doctorate from Berkeley in 2001 and joined the faculty at the University of Colorado Boulder in 2008. He leaves behind a husband, Gregg Drinkwater, who also taught Jewish studies at UC Boulder, and a daughter, Sasha, whom he co-parented with Rabbi Caryn Aviv.