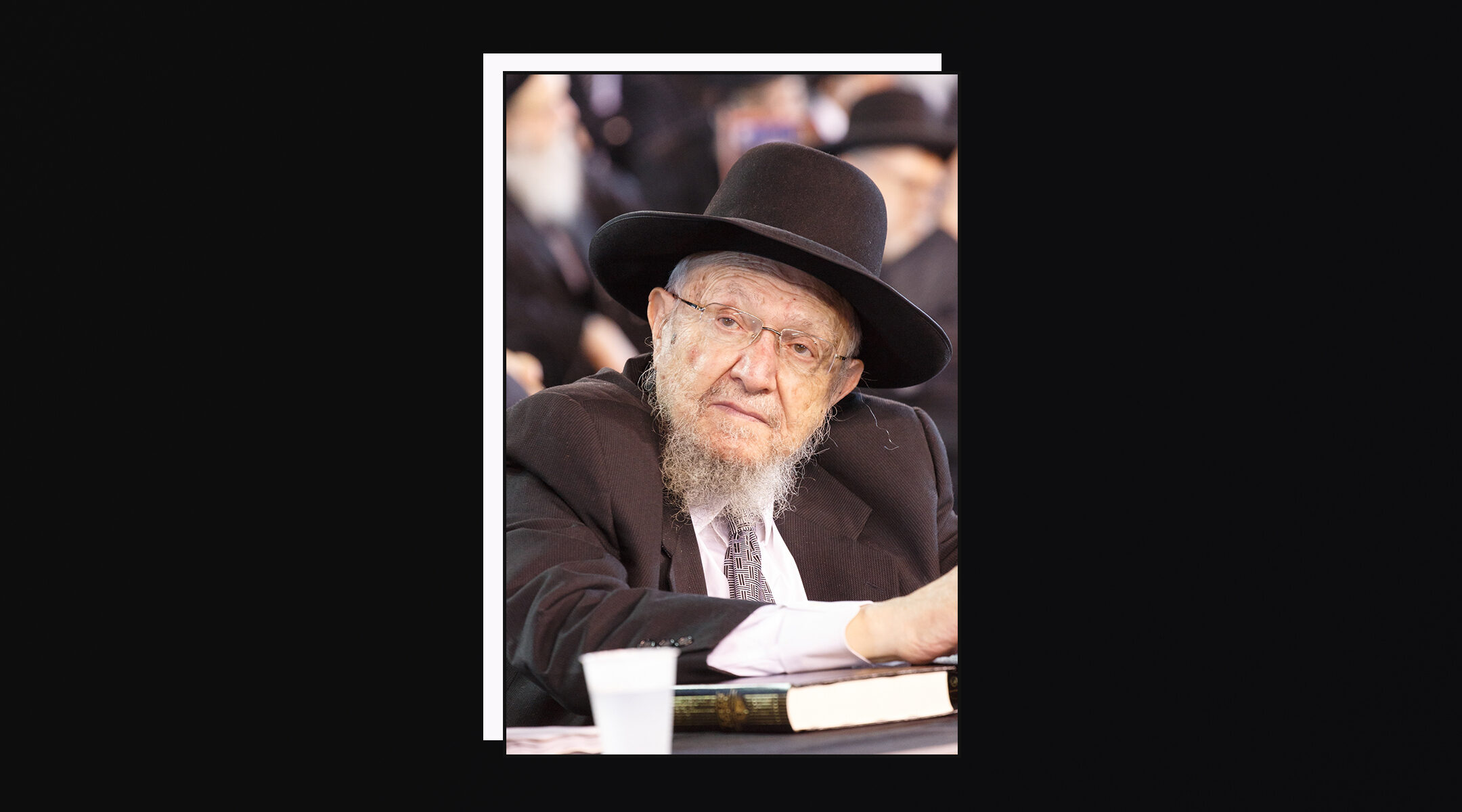 (JTA) — Rabbi Dovid Feinstein, one of the most prominent haredi Orthodox rabbis in the United States, has died. He was 91 years old.

The son of Rabbi Moshe Feinstein, one of the preeminent Jewish legal authorities in the United States for much of the 20th century, Feinstein served as the head of the Mesivtha Tiferes Yerushalayim on Manhattan’s Lower East Side from the time of his father’s death in 1986 until his own passing on Friday. He also served on the Moetzes Gedolei Hatorah, the rabbinical council connected to Agudath Israel, an umbrella organization representing haredi, or ultra-Orthodox, communities.

Though the Orthodox community on the Lower East Side has shrunk over the years as Orthodox communities in Brooklyn and other cities became more prominent, Feinstein continued to be a sought-out Jewish legal authority.

“He was a dyed-in-the-wool East Sider. He was very much a man of the neighborhood,” said Jonathan Boyarin, a professor of Jewish studies at Cornell University.

Boyarin spent a year studying at Feinstein’s yeshiva and chronicled the place in his recent book, “Yeshiva Days: Learning on the Lower East Side.”

Feinstein was born in Luban, which was then part of Russia and now Belarus, and came to the United States as a child in the 1930s. His father became head of the yeshiva at Mesivtha Tiferes Yerushalayim when the Lower East Side was a center of Jewish life in New York City, bringing together Orthodoxy, Yiddish secularism and radical Jewish politics in one cramped neighborhood. The elder Feinstein was considered one of the foremost Jewish legal experts and a communal leader in the United States until his death.

After his father died, Feinstein took over as head of the yeshiva. By that time, the Jewish community of the Lower East Side had already begun to decline, though it remained a draw for those shopping for Jewish food and books. Over time, though, the community dwindled further as large Orthodox families decamped for more spacious parts of the city or to newer communities in New Jersey.

Today the yeshiva has an outpost on Staten Island in addition to the Lower East Side building, and many students travel to study at the yeshiva from their homes in larger Orthodox communities elsewhere in the city or New Jersey.

“It gradually became a smaller institution as the Orthodox population of the Lower East Side declined,” Boyarin said.

Still, Feinstein continued to be known as a foremost Jewish legal expert.

“During his lifetime, he certainly was the foremost figure,” Rabbi Dr. J. David Bleich, a professor of Jewish law and ethics at the Benjamin N. Cardozo School of Law, said of Feinstein’s stature in the world of Jewish legal decision-making.

Asked what made Feinstein such a prominent figure, Bleich answered simply: “Pure knowledge.”

“He was very much self-effacing, he didn’t seek the limelight,” Bleich said.

Unlike his father, who was also considered a major leader on communal issues affecting the Orthodox community, Feinstein’s authority was confined to the legal sphere — but it was significant.

“The limelight chased him,” Bleich said of Moshe Feinstein. “Rav Dovid managed to get away from the limelight.”

Feinstein also departed from his father’s manner in that he issued few written opinions, instead answering Jewish legal questions orally.

“It’s very clear that he was reluctant to issue written psak [responsa] in most cases because he didn’t want his psak in a particular case to become precedent for cases where the situation might be different and even he might have ruled differently,” Boyarin said.

Hundreds attended Feinstein’s funeral, which began outside the yeshiva on East Broadway. In Israel, where he was buried, thousands attended his funeral. Two people were arrested at his funeral there, according to The Times of Israel.

“There are no words. We are reeling,” Rabbi Chaim Dovid Zwiebel, executive vice president of Agudath Israel, said in a statement. “Rabbi Feinstein was a true ‘manhig hador,’ leader of our generation, and ‘posek hador,’ halachic authority for the generation. The entire Jewish world has suffered a terrible blow with his death.”

“In addition to assuming his father’s role as head of the yeshiva, Rav Dovid was relied upon by the Torah community to succeed his father as a preeminent source of Halachic wisdom,” the O.U. said. “He provided a clear, steady and confident voice of Halachic guidance to innumerable individuals and institutions within the community.”