Facing a federal complaint, the University of Illinois pledges to protect Jewish and pro-Israel students 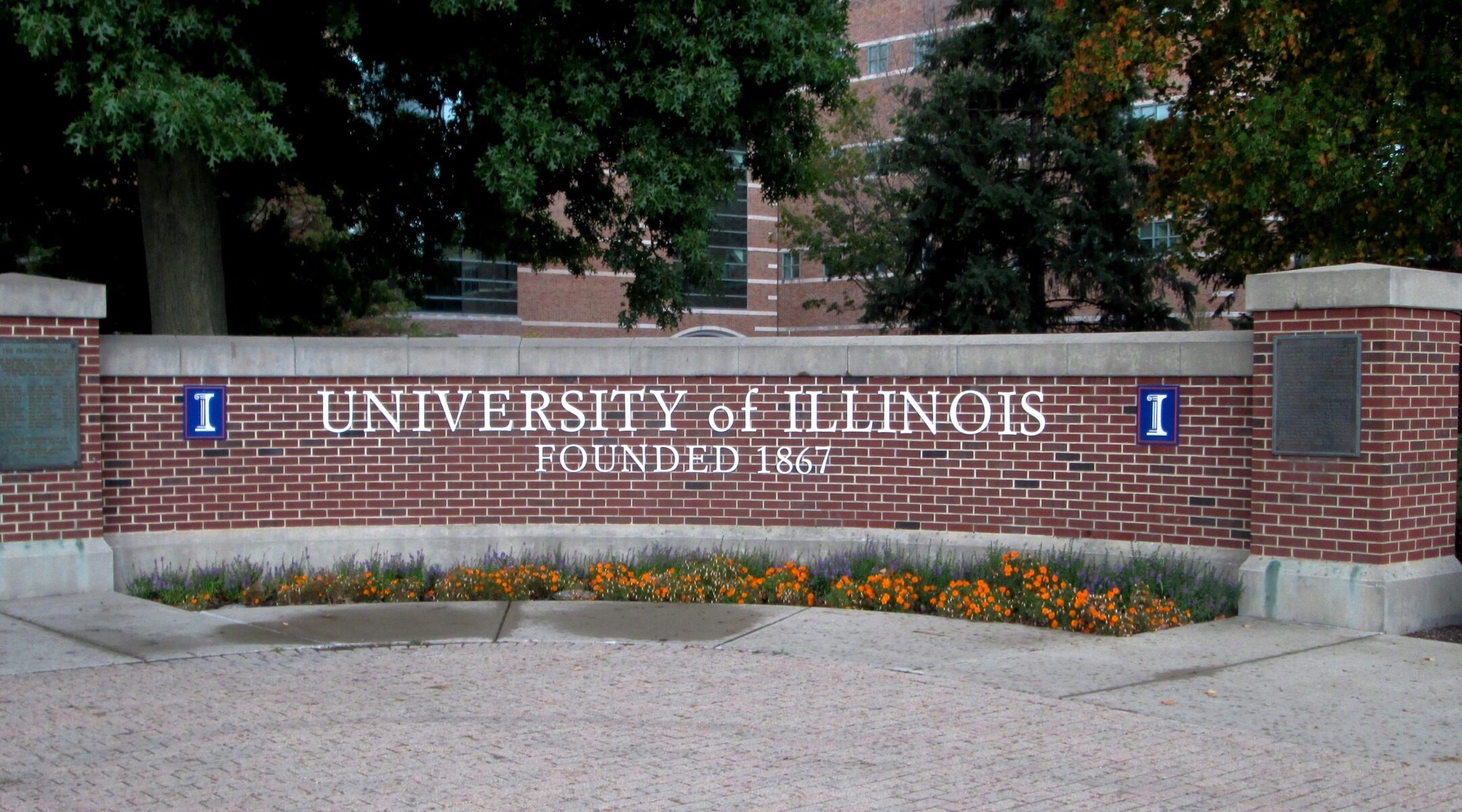 (JTA) — Weeks after publication of a federal complaint alleged an anti-Semitic climate at the University of Illinois, the university announced it would work with Jewish groups to improve conditions for Jews and pro-Israel students on campus.

The campus in Champaign-Urbana, home to 34,000 undergraduates and some 3,000 Jewish undergraduate students, was recently the subject of a legal complaint asking the U.S. Education Department to investigate a “hostile environment of anti-Semitism.” The complaint cited multiple instances of swastika graffiti, vandalism at Jewish centers and harassment of Jewish and pro-Israel students. The Trump administration has directed the Education Department to include Jewish students in its anti-discrimination protections, facilitating such complaints.

In September, the school’s student government passed a resolution supporting the Black Lives Matter movement that also included a call to divest from companies that do business with Israel. Jewish organizations in Illinois, including the Chicago Jewish federation, which controls the school’s Hillel center, protested the resolution.

Now, the school’s administration has signed a joint statement along with the federation, the school’s Hillel and Chabad and other groups promising to do more to address anti-Semitism and anti-Zionism at the school.

“For many Jewish students, Zionism is an integral part of their identity and their ethnic and ancestral heritage,” the statement says. “These students have the right to openly express identification with Israel. The university will safeguard the abilities of these students, as well as all students, to participate in university-sponsored activities free from discrimination and harassment.”

The statement pledges to set up an “Advisory Council on Jewish and Campus Life” made up of students and faculty, as well as representatives of the broader Jewish community, to ensure an inclusive atmosphere on campus. It also pledges to institute educational programing on campus against anti-Semitism and to review its policies to make sure they adequately combat anti-Semitism.

The advisory council will begin meeting next semester. The statement says, “Though these steps will further our shared goals, they alone will not effectively dispel the environment that many Jewish students have felt to be unwelcoming.”

“Many Jewish students have felt marginalized and excluded from participating equally in campus activities that are aimed at fighting racism and achieving racial justice,” said Mark Rotenberg, vice president for university initiatives and legal affairs at Hillel International, which signed the joint statement. “This is the first time a university has made all of these statements and commitments.”

The events at the University of Illinois come amid a national climate in which Jewish students and organizations that support them say campuses are unsafe for Jews and pro-Israel students. Jewish members of student governments have reported being marginalized or pushed out. Last year, 20% of Jewish respondents to an American Jewish Committee poll said they or someone they know has faced anti-Semitism on campus over the previous five years.

The Illinois statement comes less than a month after the Louis D. Brandeis Center for Human Rights Under Law, a Jewish legal rights organization, made public a complaint on behalf of Jewish and pro-Israel students with the federal Education Department citing a long list of anti-Semitic incidents on the Illinois campus and claiming that students faced an anti-Semitic climate. The complaint was filed in consultation with the the Chicago Jewish federation, called the Jewish United Fund, and Hillel.

Soon after the complaint was publicized, dozens of Jewish faculty members at the school signed an open letter opposing it. The letter expressed support for the school’s chancellor, Robert Jones. Addressed to Jones, it said the faculty members wanted to offer “unqualified support for you and to acknowledge your leadership in our university’s numerous efforts at creating a more inclusive and mutually respectful climate for all our community members.”

The incidents cited in the complaint date back to 2015 and include swastika graffiti, the campus Chabad house’s outdoor menorah being repeatedly vandalized, and mezuzahs being ripped off doorways. In addition, it describes a mandatory diversity training program that praised Leila Khaled, a Palestinian member of the Popular Front for the Liberation of Palestine, which the United States has designated as a terrorist organization.

“The attention that has now been shown in the examples [of anti-Semitism] has created momentum for the university to work collaboratively with us to take this first important step,” Rotenberg said.

A month before the complaint was publicized, the school’s undergraduate student government passed the Black Lives Matter resolution along with the clause supporting divestment from companies that do business with Israel. The resolution came after a string of failed attempts in recent years to pass a resolution favoring a boycott of Israel.

The university administration released a statement criticizing the resolution, saying, “It is unfortunate that a resolution before the group tonight was designed to force students who oppose efforts to divest from Israel to also vote against support for the Black Lives Matter movement.”

The school’s Hillel likewise rejected efforts to boycott Israel, and also objected to the grouping of Black Lives Matter and the Israel boycott, as well as the timing of the resolution, which came between Rosh Hashanah and Yom Kippur.

“This was an attempt to paint Israel and Jews as the obstacle to racial equity, amidst the holiest time in the Jewish calendar,” the Hillel’s statement said. “The Jewish students refused to submit to this antisemitic litmus test.”