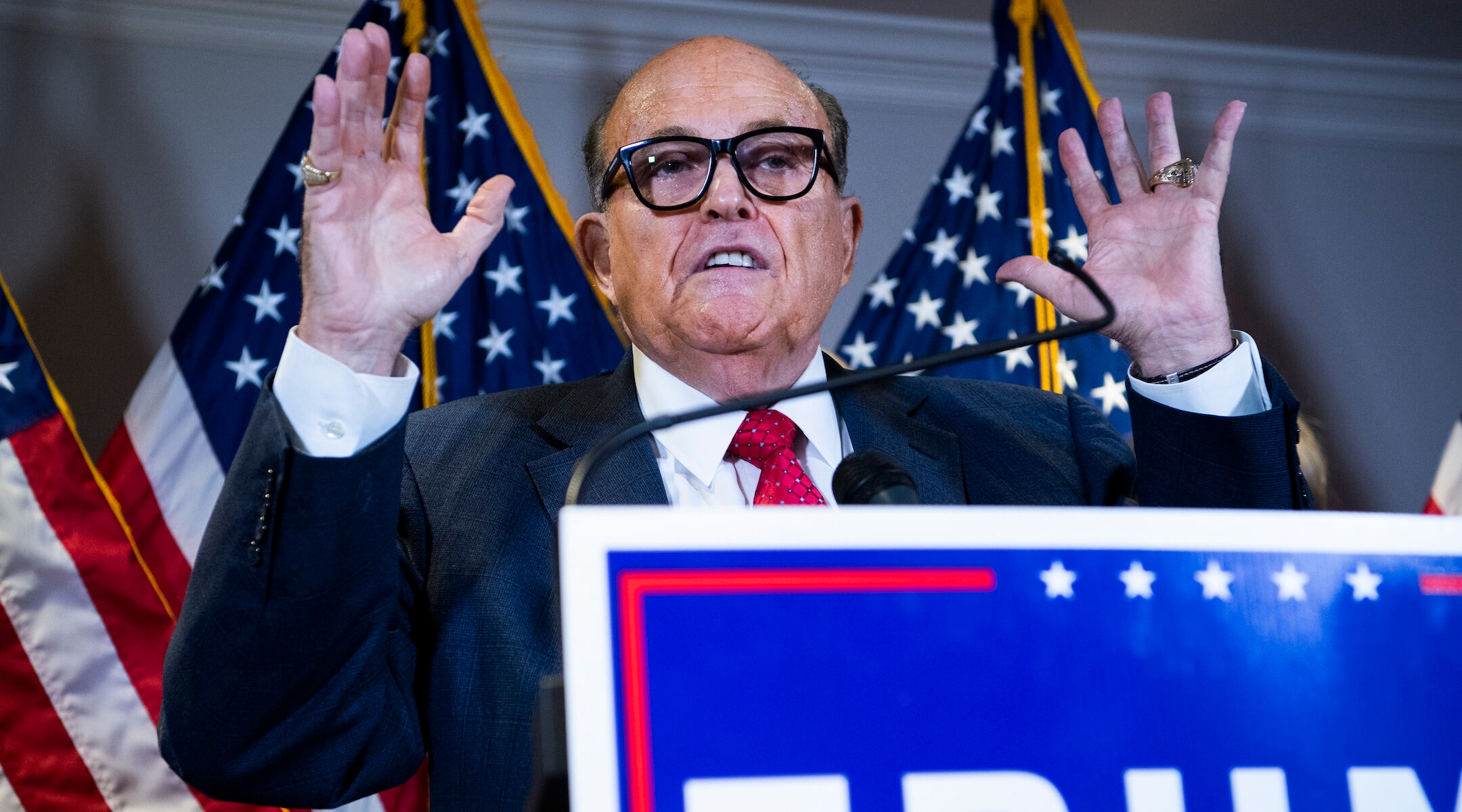 Rudy Giuliani conducts a news conference at the Republican National Committee on lawsuits regarding the outcome of the 2020 presidential election, Nov. 19, 2020. (Tom Williams/CQ-Roll Call, Inc via Getty Images)
Advertisement

(JTA) — President Donald Trump’s personal attorney Rudy Giuliani has a history of publicly attacking the Jewish billionaire financier and philanthropist George Soros, having previously called him the “Antichrist,” saying he was “hardly a Jew” and asserting that he wanted to destroy the government because of his “sick background.”

Now the former New York mayor is doubling down on his statements on Soros’ Jewish identity, saying that he is “the last person in the world who can claim victimization as being Jewish.”

In a series of messages with the Jewish Telegraphic Agency over WhatsApp, Giuliani denied that his most recent comments about Soros — made during a news conference at which he alleged that the 90-year-old Holocaust survivor was part of a wide-ranging plot to rig the November election in favor of President-elect Joe Biden — were in any way anti-Semitic.

“Why would criticisms of Soros be anti-Semitic? My goodness with his history it would be just the opposite,” Giuliani said, hinting at debunked claims that Soros was a Nazi collaborator. “He can be criticized like anyone else. As a human being not as a Jew.”

Soros, a major Democratic Party donor whose Open Society Foundation funds liberal causes around the globe, frequently crops up as a villain in conspiracy theories, many of them harking back to classic anti-Semitic tropes of rich and powerful Jews pulling the strings behind the scenes. In Hungary, President Viktor Orban has come under intense criticism from local Jewish groups for accusing Soros of masterminding a migrant “invasion” of the country, rhetoric that was later echoed by Trump when he warned of a migrant caravan coming up through Mexico to the United States. 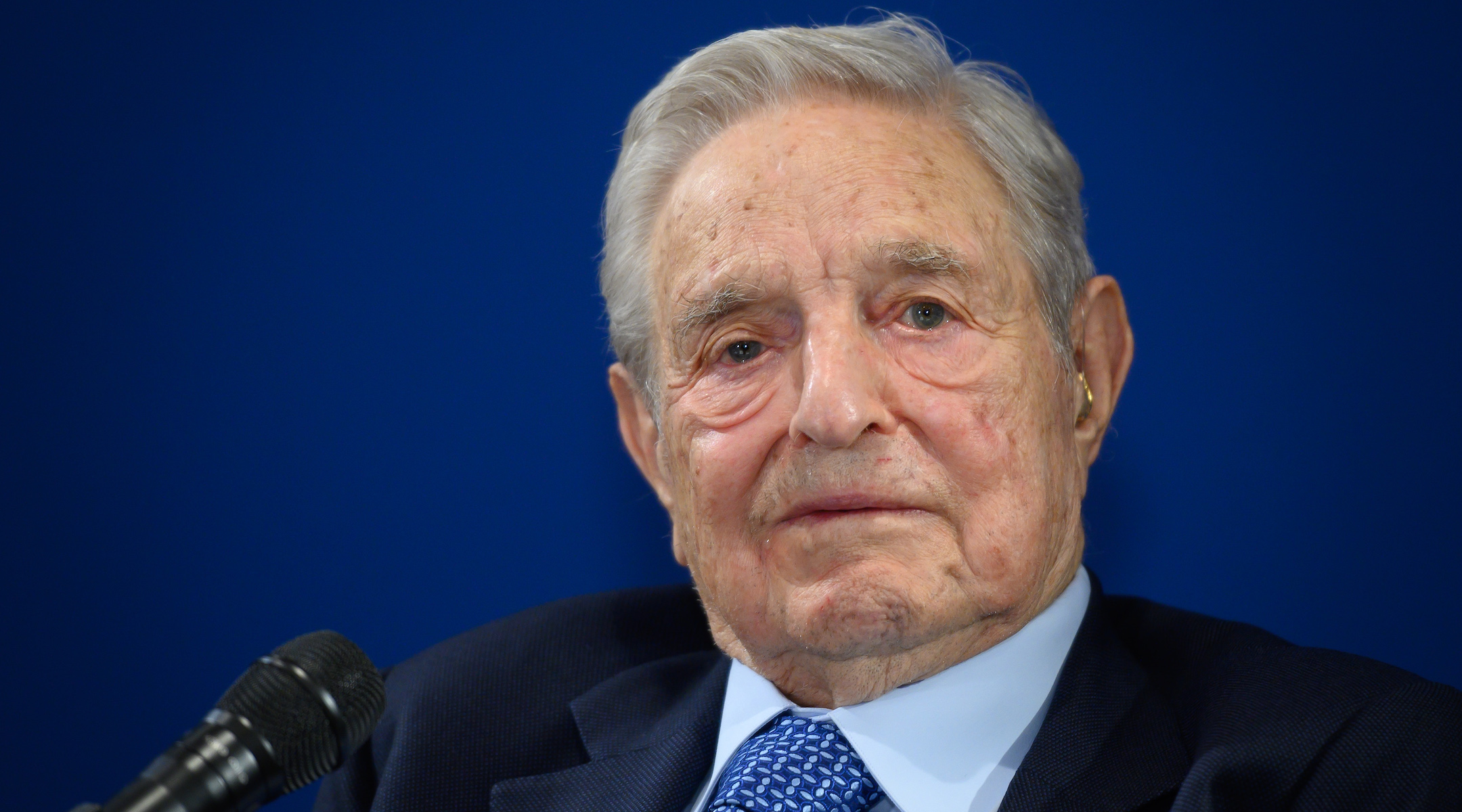 George Soros, a Jewish-American financier and liberal philanthropist pictured here in January 2020, has donated billions around the world and become a leading target of conservatives and, increasingly, anti-Semites. (Fabrice Coffrini/AFP via Getty Images)

Some claim that the idea that Soros conspiracy theories are anti-Semitic are made in bad faith. Giuliani said it “depends on what he is accused of. He’s not immune from criticism because he is Jewish and a self described atheist. Jewish scholars might have a problem with that part.”

Giuliani continued to question Soros’ Jewish identity, stating that “if you are an atheist, if he is, are you universally accepted as Jewish. I don’t know. If you’re an atheist you can’t be a Christian or Muslim.”

Informed that many American Jews are secular but still identify as Jewish, Giuliani quipped that he was “just confused on the definition and using a religion you don’t seem to accept as a shield and a sword against all criticism. If he’s an atheist he rejects the religion but accepts the ethnicity, is that it?”

Critics have portrayed Soros, who identifies as an atheist, as an enemy of organized religion. However, he has said that he “respects all faiths and religious practices” and “believes that people of faith and faith communities contribute to the public’s understanding of pressing social issues and often add a principled, moral aspect to debates that are too often dominated by politicians, statistics and polling.”

“It’s meant to protect them from being accused of anti-Semitism even while they are actively using it,” she said.

“I’m not saying that Rudy is an anti-Semite. I don’t think he’s anti-Semitic,” Lipstadt said. “I think he’s a stirrer of the pot, and if he gets traction by using Soros, he uses Soros” — even if it spreads a “classic anti-Semitic metaphor” easily recognized by anti-Semites.

“It is not anti-Semitic to highlight Soros and his work and the candidates he supports financially,” Brooks said. “His engagement makes him fair game for criticism. To suggest, as some do, that attacks on Soros are anti-Semitic codewords are simply wrong.”

Halie Soifer, Brooks’ counterpart at the Jewish Democratic Council of America, described Giuliani as both a threat to American democracy and a vector for the spread of anti-Semitic tropes.

“It’s sad to see someone who nearly two decades ago was known as ‘America’s mayor’ today serve as America’s chief conspiracy theorist attacking our democracy and providing fuel to the flames of right-wing extremism,” Soifer told JTA. “It’s not up to Rudy Giuliani to judge anyone’s Judaism, and shame on him for perpetuating hateful stereotypes and attacks that have been used by anti-Semites to target Jews, including George Soros.”

RELATED: What you need to know about George Soros, the Jewish philanthropist (still) at the center of right-wing conspiracy theories