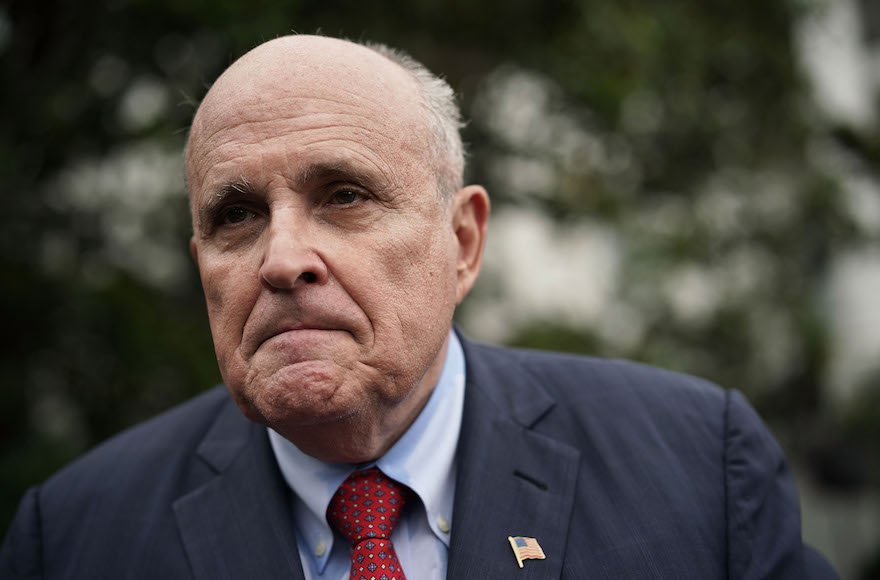 Rudy Giuliani, seen in 2018, said in a TV interview that President Trump should declare Black Lives Matter a "domestic terror organization and then maybe we can stop Soros from giving them $150 million." (Alex Wong/Getty Images)
Advertisement

Giuliani referred to the “sick background” of the Jewish billionaire and Holocaust survivor in condemning his donations to Black Lives Matter.

“This is an illegal organization and their intent is to overthrow our government,” the former New York City mayor said Monday in an appearance on the Fox News Channel in an interview on “The Story with Martha MacCallum.”

“The president should declare them a domestic terror organization and then maybe we can stop Soros from giving them $150 million. Soros is intent on destroying our government for some sick reason of his that goes back to his sick background.”

It’s not clear what Giuliani meant by “sick background,” but one popular conspiracy theory says that Soros collaborated with or helped the Nazis. In fact, as a boy during the Holocaust, Soros hid in Budapest with a Christian man who inventoried the homes of Jewish people and sometimes accompanied him, though he did not personally confiscate any property, according to Emily Tamkin, author of a book about Soros.

He was later ordered to run errands for the Judenrat, the Jewish council that the Nazis forced to work for them, but did not round up Jews for deportation.

Soros, a Hungary-born Holocaust survivor, is a left-leaning donor to the Democrats and other liberal and pro-democracy causes in the United States and Europe. He has supported left-wing organizations in Israel, including some highly critical of the government and some that support the Boycott, Divestment and Sanctions movement. He often features in conspiracy theories on the far right about Jews controlling the world.

Some more mainstream Republicans and conservatives have accused Soros, often without evidence, of pulling the strings of government officials and being the secret hand behind various developments.

In December, Giuliani told New York magazine that “Soros is hardly a Jew. I’m more of a Jew than Soros is. … He doesn’t belong to a synagogue, he doesn’t support Israel, he’s an enemy of Israel.”