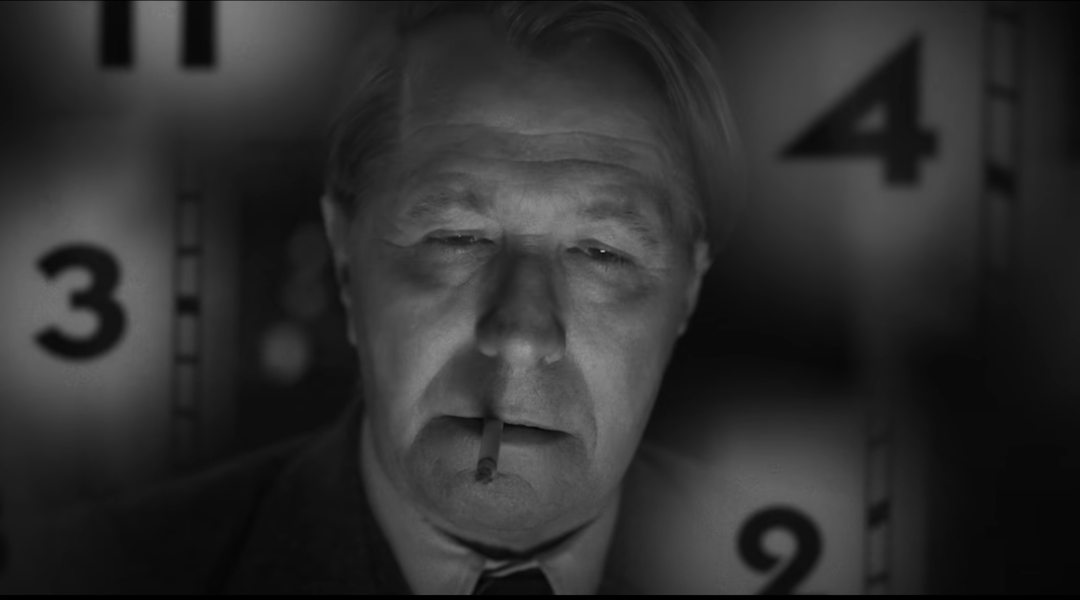 Beyond “Citizen Kane,” Mankiewicz worked behind the scenes on dozens of famous films from the silent era into the 1950s — among them “The Wizard of Oz” and the comedy “Dinner at Eight” — without often receiving credits. He was known in Hollywood’s inner circles for his sharp wit, as well as his alcoholism, and numerous critics have described Mankiewicz as one of the most influential screenwriters of all time.

But Mankiewicz has never gained the fame of “Citizen Kane,” nor its director and star, Orson Welles. And it’s likely that only the most zealous of film buffs are aware of the Jewish sides to Mankiewicz’s story. Here’s some of that history. 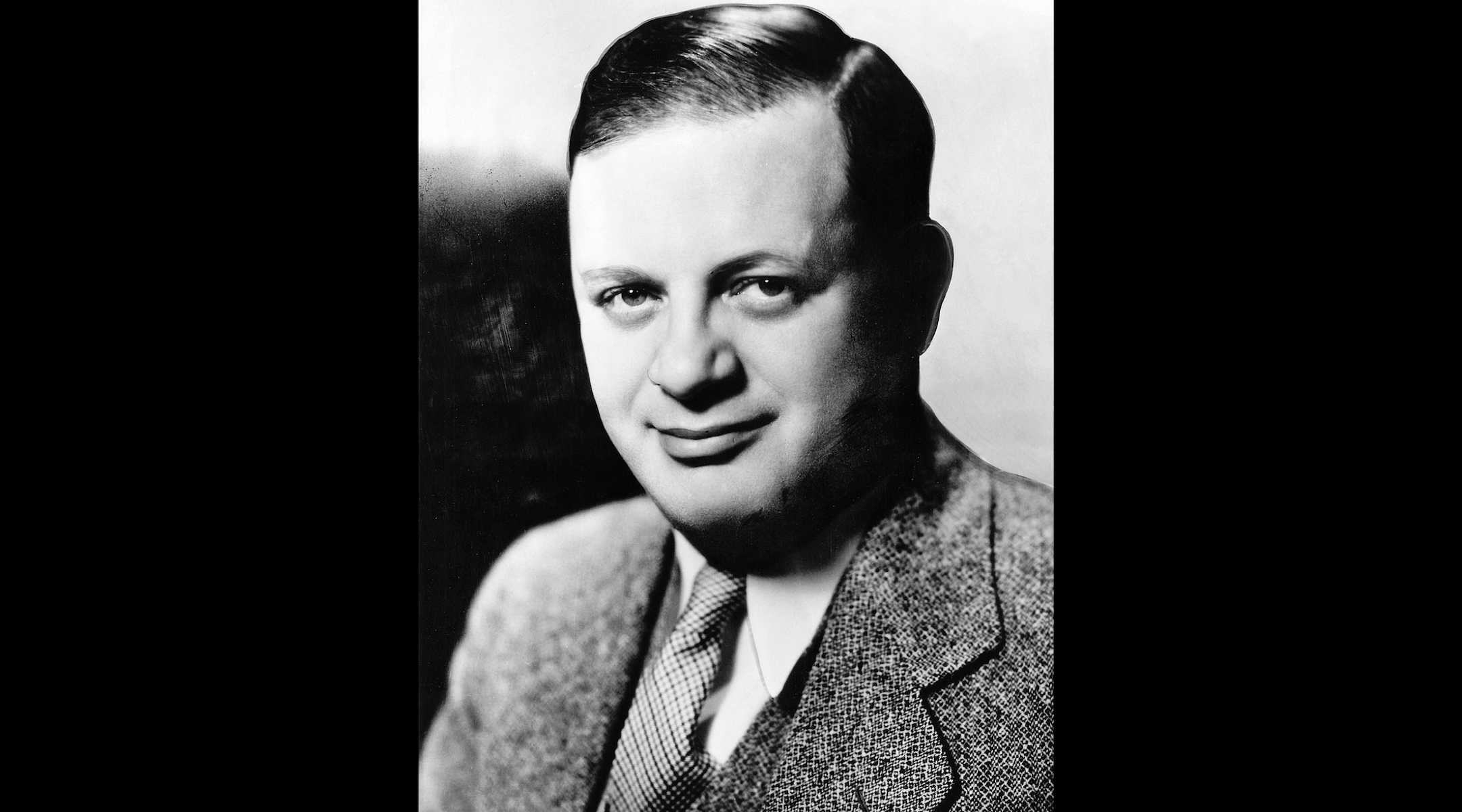 The real Mankiewicz in 1943. (Wikimedia Commons)

Mankiewicz was the son of German-Jewish parents who immigrated to the United States in the late 19th century and spent most of his early years in New York City. He has been far from the only noted member of his Jewish family. His prominent relatives include:

Before becoming a screenwriter, Mankiewicz served in the Army and Marines, then worked as a journalist, first as a reporter in Berlin for American newspapers such as the Chicago Tribune, and then as a theater and book critic for The New York Times and The New Yorker.

But before all of that, he first worked after college as an editor for the American Jewish Chronicle, one of the earliest English-language Jewish publications, then distributed nationally once a week. You can read the first issue online here: Published in May 1916, it featured contributions from luminaries such as I.L. Peretz and Ahad Ha’am.

Not big with the Nazis

In 1935, the man nicknamed “Mank” was writing for MGM when Nazi propaganda mastermind Joseph Goebbels sent the studio a letter saying that none of the films Mankiewicz was involved in would be shown in Germany — unless his name was removed from the credits.

According to a New York Times obituary, Mankiewicz didn’t do his status in Nazi Germany any favors by working on a project called “The Mad Dog of Europe,” which satirized Hitler but in the end was abandoned “on advice of influential American Jews, who feared it might militate against their co-religionists in Germany.”

The Anti-Defamation League also “feared it would provoke accusations of Jewish warmongering, and they worried that if it failed commercially, it would demonstrate American apathy to Hitler or even pave the way for pro-Nazi films,” explains an article in Commentary on the film that was never made.

Mankiewicz was just one of the many influential Jews in the early days of Hollywood working in all facets of the industry. But even as the Nazis were aware of them, most did not telegraph their Jewish identities, especially as the Hollywood blacklist — spurred on by the anti-communist sentiment of people like Sen. Joe McCarthy and FBI chief J. Edgar Hoover — grew in influence in the 1940s and ’50s.

As his grandson Ben told the Forward in May, “Most of them had to, if not hide it, hide that it mattered, that part of their identity. They felt very strongly, ‘we can’t let our Judaism influence the tone and texture of the art, of the films,’ because they knew they were succeeding in a world rich with anti-Semitism.”

(Ben also said in the interview that his father, Frank, Herman’s son, grew up in an “observant Jewish household.” So Herman clearly passed on some religiosity.)

Mankiewicz and Welles had a famously contentious relationship that boiled over during and after the making of “Citizen Kane,” as they publicly tussled over who deserved the limelight in the wake of the film’s success. Welles is often seen as the only star of the project, which he was onscreen as the lead actor — but a 1971 New Yorker article by the renowned (and Jewish) film critic Pauline Kael muddied that narrative and gave Mankiewicz not only joint but sole credit for the movie’s lauded script.

Regardless, Welles was interestingly “very fascinated and crazy about all things Jewish,” the director Peter Bogdanovich told Tablet in 2011, and “a big fan of the Yiddish art theater.” That sentiment likely formed out of Welles’ friendly relationship with a doctor named Maurice Bernstein who was close with his family, Bogdanovich theorized.

In “Citizen Kane,” which is roughly based on the rise of the newspaper magnate William Randolph Hearst, there is a character named Bernstein who sticks by the protagonist Charles Foster Kane’s side through thick and thin, and is usually referred to as the film’s most sympathetic persona.

“[Dr.] Bernstein, who was [Orson’s] legal guardian after his father died, was a very, very important figure in his life. He named Bernstein in the movie as a gesture toward his guardian,” Bogdanovich said in the Tablet interview.

In a twist, Mankiewicz was the one wary of including the clearly Jewish character, especially after the actor Everett Sloane was cast to play the role.

“Everett Sloane is an unsympathetic looking man, and anyways you shouldn’t have two Jews in one scene,” Mankiewicz said about one moment in the film, according to a memo unearthed by Bogdanovich.

Sloane, who was Jewish, had a nose that he thought was too large and despaired over it in striving to become a leading man. Welles would later say that Sloane “must have had 20 operations” on his nose before taking his own life at age 55.

One of the film’s many innovative montages includes one of the earliest examples of a character standing up against anti-Semitism onscreen, as Kane rebukes his first wife Emily’s repulsion to Bernstein during a series of breakfast scenes.

While Mankiewicz and Welles collaborated on much of the script, Tablet’s Harold Heft wrote that Welles penned the breakfast montage on his own.

“The anti-Semitism that existed then was largely from the Jews themselves,” Bogdanovich said.