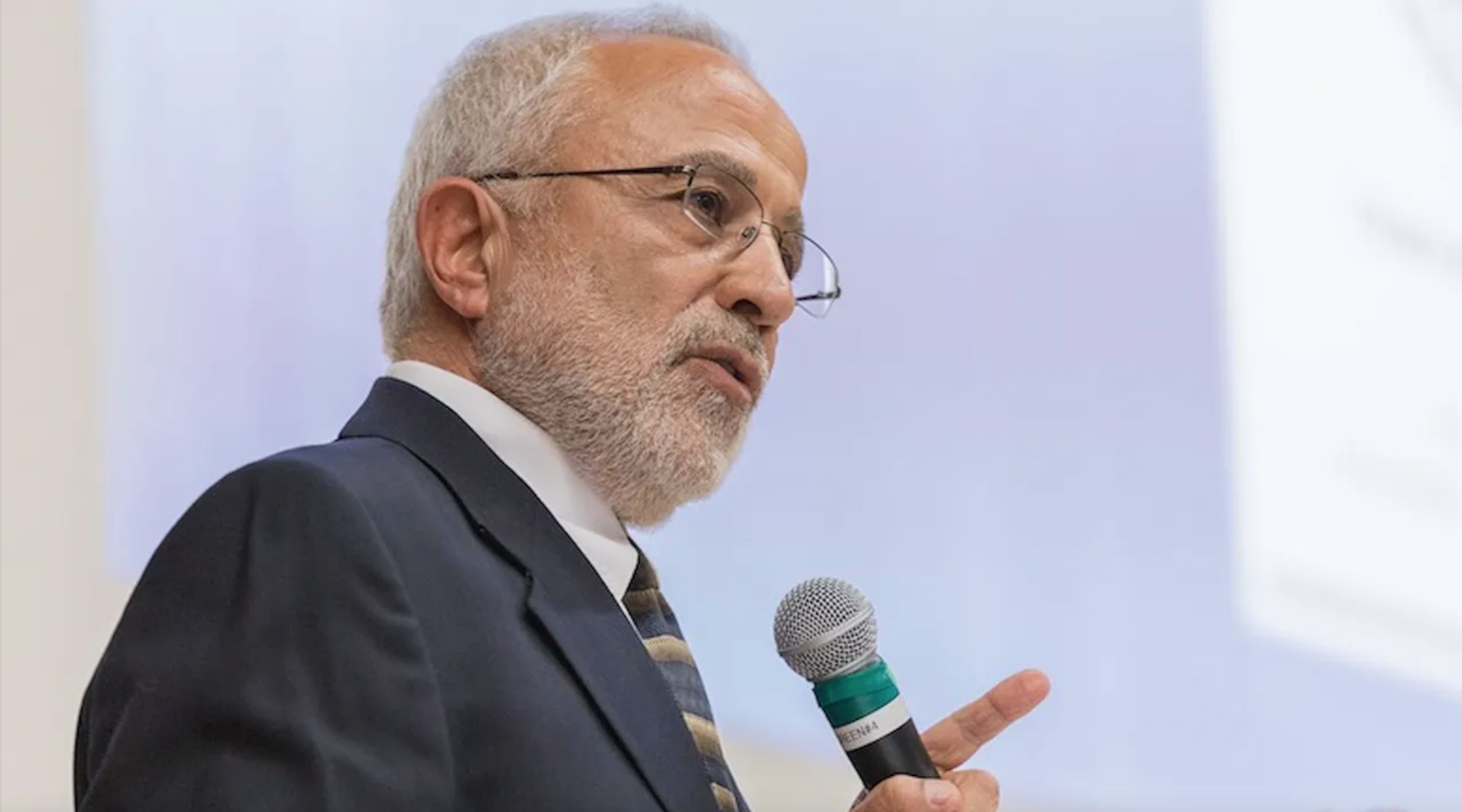 (J. the Jewish News of Northern California via JTA) — A teaching professor at the University of California Merced’s engineering school owns a Twitter account that featured a pattern of anti-Semitic posts, J. has discovered. The content was described by the Anti-Defamation League as “repulsive” and promoting “anti-Semitic tropes.”

Abbas Ghassemi’s account, launched in July 2019, was deactivated after J. sent a request for comment on Dec. 18. But the newspaper was able to create an archive and take screenshots of some of his tweets prior to the shutdown. He had published or retweeted more than 2,200 times.

On June 14, Ghassemi tweeted “… reality bites!!!!!!” along with a photo of a “Zionist brain” with labels such as “frontal money lobe,” “Holocaust memory centre” and “world domination lobe.” That same image can be found on the website Jew World Order, which peddles anti-Semitic conspiracy theories.

On Dec. 8, in response to Joe Biden’s election win, Ghassemi retweeted another Twitter user’s post and commented, “Surprise, surprise!! The entire system in America is controlled by [the] Zionist. Change of president is just a surface polish, change of veneer. Same trash different pile!”

Many of Ghassemi’s tweets used “IsraHell” in place of “Israel.”

On Dec. 13, he retweeted something and added the comment, “the Zionists and IsraHell interest have embedded themselves in every component of the American system, media, banking, policy, commerce … just a veneer of serving US interest and population — everyone pretends that is the case.” 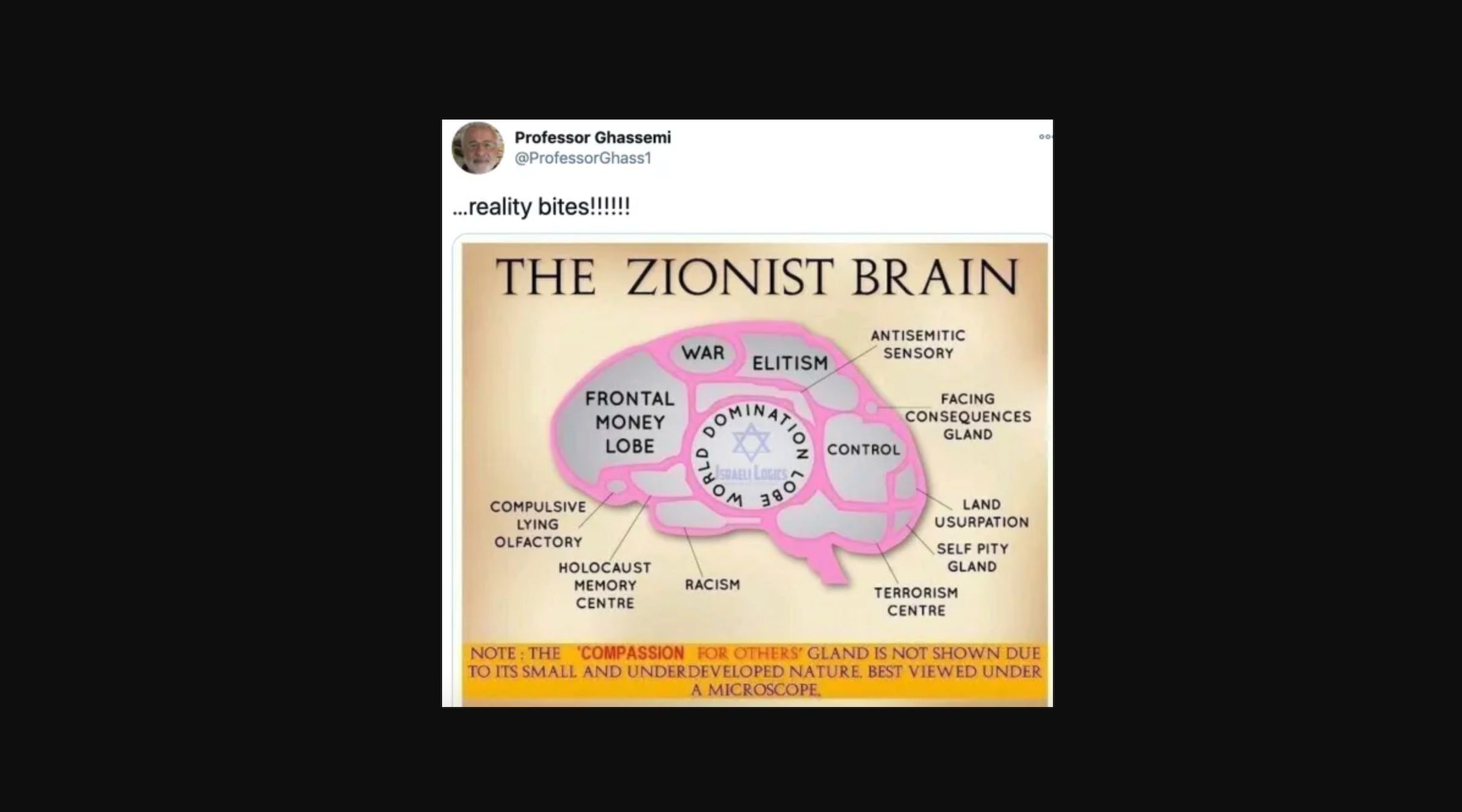 Ghassemi tweeted similar posts about Zionists and Israel controlling certain components of the United States another eight times between October and December.

Ghassemi did not reply to queries from J. made through his university email and by direct message via Twitter.

Though the biography section of his Twitter profile reads “Professor of engineering at the University of California,” a UC Merced spokesperson said, “As the now-inactive Twitter account made clear, these were the opinions of a private individual, not the positions of the institution.”

Jim Chiavelli, an assistant vice chancellor in the school’s Office of External Relations, added, “Under our Principles of Community, UC Merced is committed to ‘uphold the right to freedom of expression and encourage a culture of dialogue, understanding and civility in all interactions.’”

Chiavelli did not say whether the university would take any action against Ghassemi. 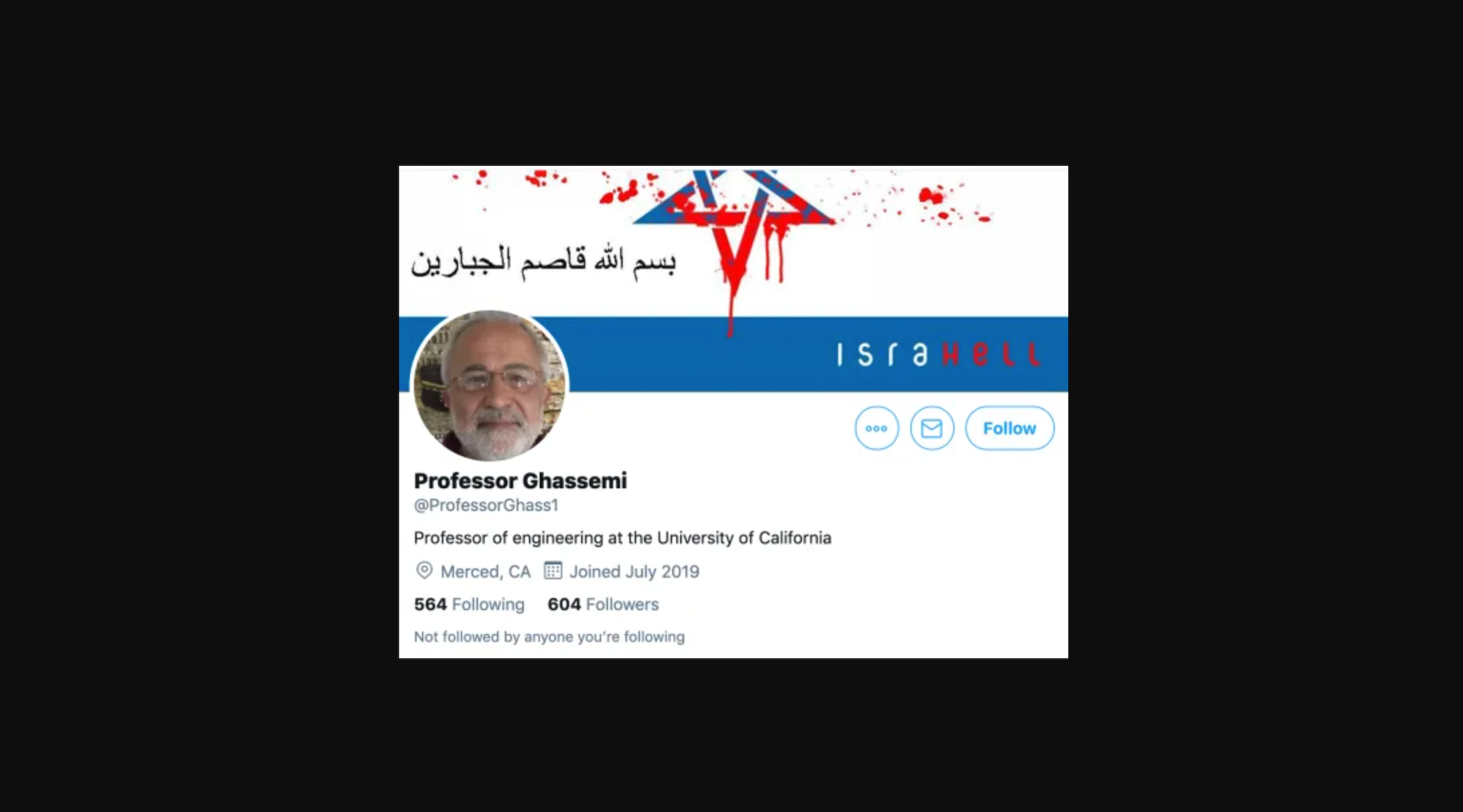 “It is deeply offensive,” Brysk added.

Brysk said that Ghassemi’s tweets “appear to violate the social media platform’s rules for directing hate against a group.” While Twitter’s policy on hateful conduct does not explicitly mention anti-Semitism, the company does “prohibit targeting individuals and groups with content intended to incite fear or spread fearful stereotypes about a protected category.”

Established in 2005, the Merced school is about 130 miles from San Francisco, halfway between Modesto and Fresno. During the 2019-20 academic year, the school’s enrollment of undergraduates and graduate students combined was 8,847.

According to his Merced online biography, Ghassemi graduated with an undergraduate degree in chemical engineering from the University of Oklahoma in 1979, then started graduate studies at New Mexico State University in 1988. According to his LinkedIn profile, he worked and taught at New Mexico State through 2015 and joined Merced in February 2018.

Until early last year, he was the editor of Energy Sources, a journal focusing on energy and the environment.