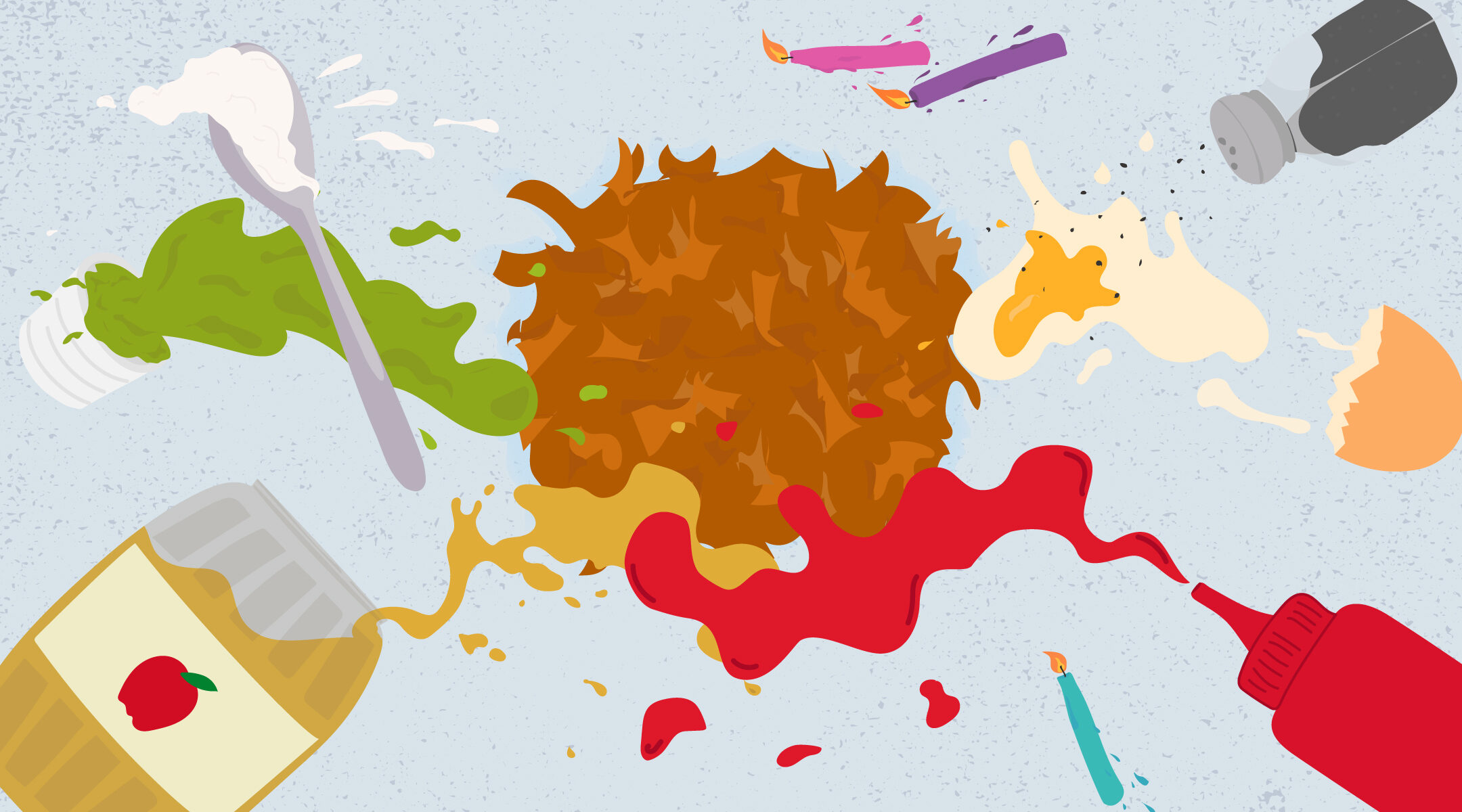 (JTA) — Even after the candles burned out on the last night of Hanukkah, when the dreidels were put away and the gelt long since eaten, Jews were still debating the appropriate toppings for their latkes.

There was team applesauce and team sour cream, equally staunch in their arguments that theirs were the most authentic of the toppings. Some argued that the two should coexist on the same potato pancake — but agreed that ketchup was off limits.

Are latkes better with applesauce or sour cream? Answer is both and if you disagree you’re wrong

Even Dr. Anthony Fauci was drawn into the debate, going to bat for the sour cream supporters.

The Latke Wars, as some dubbed the debate, weren’t the first Jewish food fights to unfold on the battlefield of Twitter — and they are unlikely to be the last. In fact, Jewish food wars on social media are a near constant, cropping up every few months when someone offers a risky take on the merits of chocolate hummus or a variation of kugel.

But is the faceoff really about sour cream and applesauce, or is there more on the line than condiment preferences?

When Alex Zeldin first confessed to Twitter two years ago that he finds hamantaschen, the triangle-shaped Purim cookies, to be unredeemable culinarily and beloved only for their nostalgic value, the backlash was fierce.

“I was like, I have to be a little bit careful about those because I am wading into things that are borderline sacred to people,” he said.

But instead of pulling back on his food opinions, Zeldin has only doubled down. He frequently posts controversial food takes for his more than 10,000 followers, like his opinion, voiced as early as Nov. 30, that applesauce has no place on a latke — the first shot fired in this year’s Latke Wars. The conversations he cultivates exemplify the nature of Jewish food discussions on social media, where the barrier to entry is low and the jokes are plentiful, but the stakes (no pun intended) are often higher than expected.

Hanukkah begins next week so it's as a good time as any to remind the Ashkenazim among you that apple sauce gets paired with cinnamon not latkes.

Respect your roots. Dip your latkes in sour cream.

While Zeldin tries to keep the tone of the arguments lighthearted, others say social media arguments about Jewish food are really proxy wars for deeper tensions in Jewish life. Rather than constituting a silly diversion from the more weighty political discussions that often dominate the platform, they say, the food debates point to deeper existential questions about modern Jewish identity that are constantly churning for many Jews but not possible to hash out on Twitter.

Offering a contrarian take on hamantaschen or polling about ketchup fits neatly into 280 characters in a way that, say, hashing out the historic dominance of white, Ashkenazi Jews in public Jewish life or the way multi-faith families are welcomed into synagogues does not. Posting that latkes served with mango chutney don’t count as “Jewish” may seem less toxic than debating the status of someone’s conversion to Judaism. But for the person who takes their latkes with mango chutney, the claim can still feel like an attack on their identity.

“Here we’re getting a witness to the fact that food and folkways and culture are also really significant anchors in Jewish identity in practice,” said Yehuda Kurtzer, president of the Shalom Hartman Institute of North America, who eats his latkes with applesauce (he calls it an “unimpeachable classic”) and sometimes creme fraiche and smoked salmon. “And the fact that people fight about it shows the extent to which they’re passionate about those as really significant anchors of their identity.”

Basically, you're on Team Ketchup. Welcome aboard.

To Rachel B. Gross, a professor of Jewish studies at San Francisco State University, the debates about the proper way to eat Jewish foods and which foods are actually Jewish are really about drawing boundaries to determine which of the people who consume those foods are “in” or “out.”

“I think what could be happening here could be described as Jewish nationalism, and certainly Jewish boundary-making in a long history with people using food in this way,” said Gross, whose forthcoming book “Beyond the Synagogue: Jewish Nostalgia as Religious Practice” includes a section on the role of food in modern Jewish identity.

Food is precisely about ethnic boundary-making, according to Ari Ariel, a professor of history and international studies at the University of Iowa who has written about Middle Eastern Jewish food and is a graduate of the French Culinary Institute in New York.

“If you’re trying to define an ethnic group, that generally means defining attributes of that group, and food ways is always a big part of that,” Ariel said.

But for Jews, who have adopted local cuisine from the places they’ve lived all over the world, there is no unified cuisine shared by all. Instead there are many, from Georgian Jewish food and Yemenite Jewish food to Eastern European foods such as latkes.

For some observers of social media food discussions like the one about latke toppings this month, the conversations can feel exclusive of those who eat different foods or don’t come from an Eastern European, Ashkenazi background. In a year in which the food publishing world has undergone numerous scandals in which ethnic foods have been stripped of their historic roots, and the Jewish community has gone through a reckoning with its own racial and ethnic diversity, conversations about food can be extra freighted.

Rabbi Ruth Abusch-Magder, education director at Be’chol Lashon, an organization that aims to raise awareness of diversity within the Jewish community, said she finds the discussions about latkes to be frustratingly narrow.

“I was just watching people get into these fights and maybe they’re just joking around. But for some people, those jokes feel exclusive,” she said, wondering why tostones, bunuelos and other fried foods aren’t part of the discussion when people talk about Hanukkah foods. “Or they still create an exclusive vision of what Jewish is. And Jewish is so broad.”

“The consequence of calling it [latkes] Jewish food is to say Jews are Ashkenazi Jews who eat latkes,” said Ariel, whose father is Yemenite and often makes zalabiyyah, a kind of Middle Eastern doughnut, for Hanukkah.

If someone handed you a latke that was very undersalted, and ketchup was the only available topping, would you eat the bland latke straight or would you put ketchup on it

To Anthony Russell, a Yiddishist and singer who is Black, the debates that break out on Twitter over Jewish foods like latkes are about much more than the dominance of Eastern European Jewish traditions in American Jewish life, though he eats his own latkes with applesauce and sour cream, calling himself “a traditionalist lol.”

Some of the food arguments touch on longstanding disagreements over “Jewish authenticity” and what food, music or rituals are “authentically” Jewish.

“There is a larger and really uncomfortable debate about what is authentically Jewish and how should that look in public?” Kurtzer said. “And if for a lot of people their identity is tied into their food, and I think it is, it’s not surprising that when that conversation takes place in public, it makes people uncomfortable, it makes them angry.”

Being a Toronto Jew is indulging in the ultimate Jewish food: blueberry buns. In Toronto, and only in Toronto. https://t.co/RugbeYuhMa

Gross said she tries to take a Twitter break every time a holiday is coming because she finds the food fights, and the accompanying claims about Jewish authenticity, tiring. There is not one essentially Jewish food, she said, and claiming there is oversimplifies the variety within Jewish cuisine.

“If you’re claiming that there’s an authentic Judaism, you’re not accounting for the vast ways that Judaism has been lived throughout time and space,” Gross said. “You’re getting a really flat picture and … you’re not allowing for change.”

What is essential to Jewish culture, according to cookbook author Leah Koenig, is the fact that food is often tied to the memories that make up Jewish identity, like family dinners or visits to grandparents.

“A lot of the folks in the younger generation are not necessarily super connected to Jewish traditions, but they did grow up eating deli or they did grow up having latkes on Hanukkah,” Koenig said. “So for them, it’s also an identity thing … It feels very, very personal.”

Sometimes the social media food fights veer into claiming certain foods, like kugel or gefilte fish or brisket, are unequivocally bad. But Koenig also sees an effort underway among Jewish food writers to reinvent those foods and improve upon them. And sometimes, the memories of the food are more important than whether or not it tasted good then or tastes good now.

“Even if the food was culinarily not that great, there’s still the layer of memories and nostalgia on top of it,” Koenig said. “There’s this sense of what the meal felt like that colors people’s memories of what the food tasted like.”

Reinventing Jewish food can also mean discovering dishes from other Jewish cuisines — like swapping out a sweet brisket recipe for an herby Persian lamb stew or kibbeh for meatballs.

But without in-person events and face-to-face interactions, opportunities to expand our food horizons are limited to what we can make in our own kitchens or order as takeout. In the absence of food festivals, we get food fights and Latke Wars.

Even so, Zeldin sees an upside. To him, the food tweets are more about having fun discussions about questions of Jewish identity than any specific foods. And in his experience, the discussions are a way to bring together Jews of different political stripes and religious affiliations who might otherwise not agree on much at all.

For those who might feel too intimidated to join Jewish discussions online, food, which is something everyone has experience with, can be an easier entry point to the conversation.

“You can just say, well this is what my bubbe used to do,” Zeldin said. “And it’s much more of an invitation that way, even if they’re disagreeing with me, they’re still engaging,

“I’m not trying to piss anybody off,” he insists. “But I’m thrilled to get people talking about it.”