Jon Ossoff: Everything you need to know about the newest Jewish Democratic senator 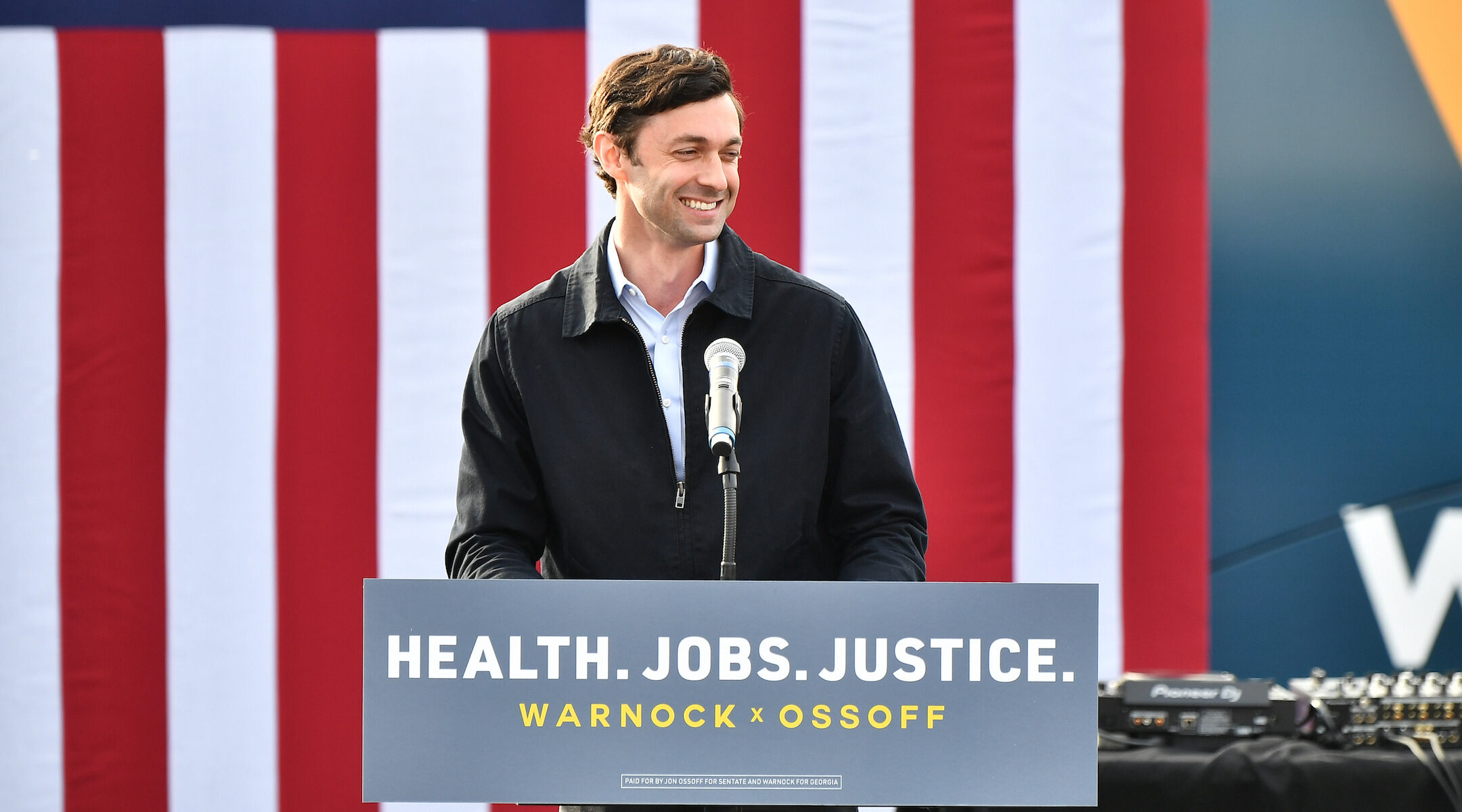 (JTA) — Jon Ossoff, a Jewish 33-year-old former executive of a documentary film company, has done what seemed nearly impossible just a few years ago: won a Senate election as a Democrat in formerly deep-red Georgia. Along with his fellow Democratic Senate winner, Rev. Raphael Warnock, the pair has flipped control of the U.S. Senate.

Ossoff’s young age and relatively short resume — in politics, at least — have left him a somewhat unknown figure. Here’s what you need to get acquainted with the newest Jewish member of Congress.

His path to politics was unusual. Ossoff demonstrated political interests early on, famously gaining an internship with Georgia Rep. John Lewis after writing the civil rights leader a fan letter as a teenager. He also worked as a speechwriter after college. But then he took a detour to work in documentary film before mounting a congressional bid in a 2017 special election. While he fell just short in that race, it elevated his name nationally and in his home state, positioning him to run for Senate. He has never held any elected office before.

He’s the youngest senator elected since 1973. That was Joe Biden, elected in Delaware at just over 30 years old. At 33, Ossoff is also the only senator too young to become president.

He’ll join a robust Jewish Senate delegation. Eight other Senate Democrats identify as Jewish, including New York Sen. Chuck Schumer, who goes from minority leader to majority leader with Ossoff and Warnock’s elections. (Michael Bennet of Colorado does not identify as Jewish, but his mother is a Holocaust survivor and he says his family history informs his values.) But it’s far from the largest Jewish Senate delegation in history: 13 Jews were among the senators sworn in in 2007.

He’s motivated by his Jewish background. Ossoff wrote a letter addressed to his state’s Jewish community last month and published it in the Atlanta Jewish Times. In it, he wrote that his Jewish upbringing “instilled in me a conviction to fight for the marginalized, the persecuted and the dispossessed.” He has delved into that territory more deeply in other venues, including in a 2017 interview with Moment magazine, where he said, “I think that Jews share a story that compels us to approach the world with empathy.”

Yes, he had a bar mitzvah. “I was bar mitzvahed at the Temple, which is a Reform synagogue,” he told JTA in 2017 during his first Senate run. “My Jewish upbringing imbued me with certain values, a commitment to justice and peace.”

He supports Israel and opposes BDS. In a position paper from July, Ossoff wrote that he is “committed to Israel’s security as a homeland for the Jewish people.” (He personally has family there, he told the Atlanta Jewish Times.) To that end, he “vigorously” opposes the boycott Israel movement, supports continuing the robust American military aid to Israel and wants to see a two-state solution to the Israeli-Palestinian conflict. He also supports diplomacy with Iran, through a nuclear deal and otherwise, to curb its nuclear arsenal.

He’s got an immigration story. Ossoff’s father’s parents fled pogroms in Eastern Europe, while his mother moved to the United States from Australia at 23. (Because she is not Jewish, he formally converted before his bar mitzvah.) “American Jews all share that immigrant story,” he told JTA in 2017, “and that perspective hardens my resolve to fight for an open and optimistic vision of our country where if you work hard you can get ahead, where we welcome those who come here to build the country.”

He’s married to a Jewish doctor. Alisha Kramer is an obstetrician working in Atlanta. She was working an overnight shift Tuesday night, Ossoff said, so she wasn’t with him as promising returns came in.

He’s got a favorite Jewish food. “I’m always in the mood for matzah ball soup. Even if it’s 100 degrees outside,” he told Moment in 2017.

He can sing. Ossoff was in an a cappella group in college at Georgetown University, a fact that one attack ad tried to spin against him. Here are the videos.

He’s a millennial sex symbol. Some of Ossoff’s backers like him because of his political views and potential to shift American politics. Others are into all that and more. “The internet thirst for Ossoff is strong,” Vogue reported this week, noting that the politician resembles popular Jewish actor Timothee Chalamet. Among the evidence cited: a November piece in Alma titled, “We need hot Jews like Jon Ossoff in the Senate.”

He’s not afraid to stand up when he sees bigotry. Over the summer, Perdue’s campaign ran an ad that digitally lengthened Ossoff’s nose. (Perdue said the change was unintended and took down the ad.) Ossoff brought up the incident during a debate with Perdue in October, accusing him of “lengthening my nose in attack ads to remind everybody that I’m Jewish.” And last week he used a brief Fox News interview to say repeatedly that Kelly Loeffler “campaigned with a klansman,” a reference to her appearances with a white supremacist that she later disavowed.

He’s (almost) the first Jew elected to the Senate from a Southern state. Even some states with relatively few Jews have had Jewish senators, including Vermont and Hawaii right now. But Southern states have not been among the dozens of states to elect Jewish senators in the contemporary era — with the exception of Florida, which sent Richard Stone, a Miami-area Democrat, to the Senate in 1975. (Judah Benjamin represented Louisiana in the Senate in the 1850s, but that was before he became the highest-ranking Jew in the Confederacy. Benjamin Jonas, a former Confederate leader, represented Louisiana during Reconstruction.)

He’s worked to center Black voters. Ossoff has acknowledged throughout his rise in Georgia politics that he is indebted to Black voters and the history of progressive Black activism in the state. He often mentions the influence of civil rights leaders like Lewis and the Rev. Martin Luther King Jr., describing himself and Warnock as “the young Jewish son of an immigrant mentored by John Lewis and a Black pastor who holds Dr. (Martin Luther) King’s pulpit at Ebenezer Baptist Church.” Lewis was an early supporter of Ossoff in his run for a House seat in 2017.

In a video declaring victory on Wednesday morning, Ossoff said he and Warnock would seek to follow “in the footsteps of leaders who have departed us in this last year, like Congressman John Lewis and C.T. Vivian,” referencing another civil rights leader.