Police vehicles gather around the synagogue where a shooting took place in Poway, Calif., April 27, 2019. (Xinhua/ via Getty Images)
Advertisement

When someone threw rocks a couple months ago at the doors of a Chabad center in Atlanta, the glass didn’t shatter.

That’s because earlier in the year, local Chabad leaders decided to reevaluate their security following an incident with a trespasser.

Neil Rabinovitz, a former 22-year veteran of the FBI who now works as community security director for the Jewish Federation of Greater Atlanta, visited the site and performed a security assessment. He determined that the building needed to add more security cameras, change its system for locking doors — and presciently, install a new coating on its glass doors.

“Had they not taken the recommendations, the rocks would have gone right through and shattered,” Rabinovitz said. “But because they upgraded their cameras, we have great pictures and could actual see with that coating, it did what it was supposed to do.”

The successful outcome speaks to the changes that have happened in the Jewish community in recent years in coordination with the Secure Community Network, or SCN, a security nonprofit that assists Jewish institutions across North America.

Orsini, Rabinovitz and other SCN leaders have been particularly busy over the past two years, since the deadliest-ever attack on Jewish Americans — the October 2018 shooting massacre at the Tree of Life synagogue in Pittsburgh. Synagogues, Jewish day schools and other institutions have been tightening their security protocols since that shooting, which was followed by deadly attacks on a Chabad synagogue in Poway, California, at a kosher grocery store in Jersey City, New Jersey, and at a home in Monsey, New York.

In all, there were 2,107 anti-Semitic incidents in the United States in 2019, the most since at least 1979, according to the Anti-Defamation League.

In May, SCN released a guide, “Low-Cost/No-Cost Security Measures for Jewish Facilities,” that highlights 10 central areas Jewish institutions should address:

With the recent political unrest and protests, Jewish organizations should be on high alert, security officials say.

“Far from the current conditions driving down anti-Semitism, threats or the likelihood of an attack, it appears that they may exacerbate them, particularly as our community begins to reopen,” said Michael Masters, SCN’s national director and CEO. 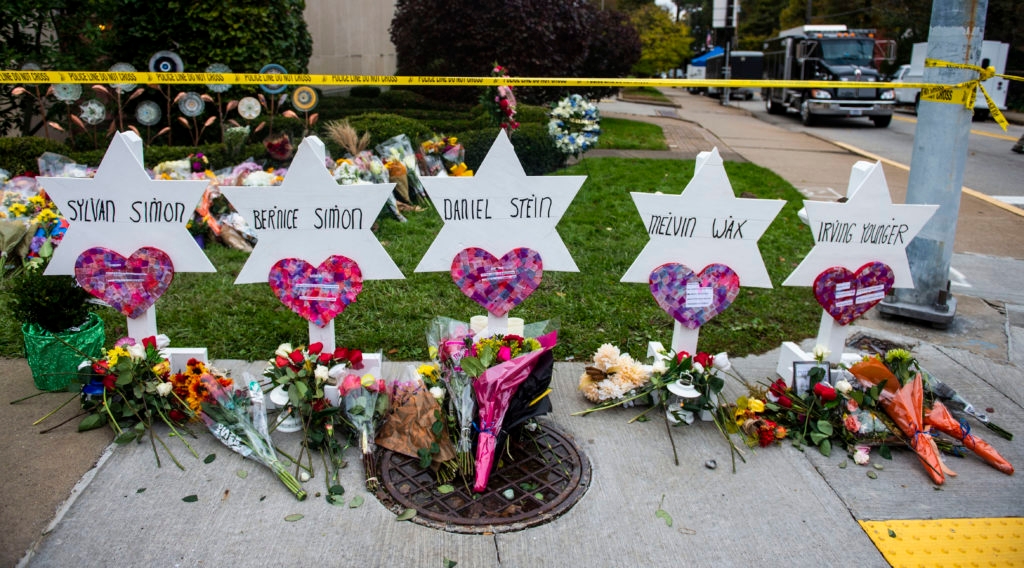 A memorial for victims of the attack on the Tree of Life synagogue in Pittsburgh, October 2018. (Matthew Hatcher/SOPA Images/LightRocket via Getty Images)

Improving security isn’t simply about investing more money in infrastructure. For example, a synagogue might have five entrances. Best practices recommend that just one be used and the others be locked, Orsini said.

“The most important thing we can do for building security is to control access in and out of building,” said Orsini, who also spent nearly three decades with the FBI. “The first problem we have to overcome as security consultants in the community is to convince them at shul on Friday night and Saturday, you got to lock your doors.”

The organization also recommends employing an off-duty police officer or a certified security services professional who can guard entrances to a campus or building. Jewish institutions should also have ushers and greeters who are trained to detect suspicious behaviors.

“It’s all part of the greater security safety system of many layers to ensure that we are keeping folks the safest we can,” said Gene Moss, director of community security for Jewish Federation of Greater Portland in Oregon.

Suspicious behavior might include someone sitting in a vehicle for an extended period of time, including after regular business hours, or recording information about an institution by sketching, note taking, videotaping or taking pictures, the ADL reports.

SCN also recommends that Jewish institutions host Stop the Bleed training for staff and community members — to help victims survive until first responders arrive. Before the shooting at the Tree of Life synagogue, congregants participated in a session to recognize and intervene with life-threatening bleeding, and that training saved lives, according to a Pittsburgh trauma surgeon who treated the shooting victims.

Orsini, who worked for the Pittsburgh federation before switching to the national job earlier this year, also did active threat training with Tree of Life’s rabbi, Jeffrey Myers, and others at the shul. He convinced Myers to carry a cell phone on Shabbat, which most Conservative and Orthodox clergy eschew on the holy day. Myers called 911 during the shooting.

“We know that this training can make a difference,” Masters said.

Lilly Krenn, executive director of Beth Jacob Congregation in Oakland, California, organized a Stop the Bleed training for her Orthodox synagogue on a Sunday afternoon in January 2020. More than 50 people attended. They received a kit containing such items as a tourniquet, protective gloves and a compression bandage.

“It was very emotional for a lot of people,” Krenn said. “The people who were attending were not medical people, and it was pretty graphic. If you are learning how to stop a wound from bleeding more, it can be fairly intense, but I think everyone left feeling like there was something that they would be able to do” in the event of an attack.

During these uncertain times, Krenn said she is grateful for the new equipment and training.

“I think one can feel very vulnerable during these times,” Krenn said. “And when you have people bring support to you, it’s a reminder that there are so many good, caring, loving people in the world.”