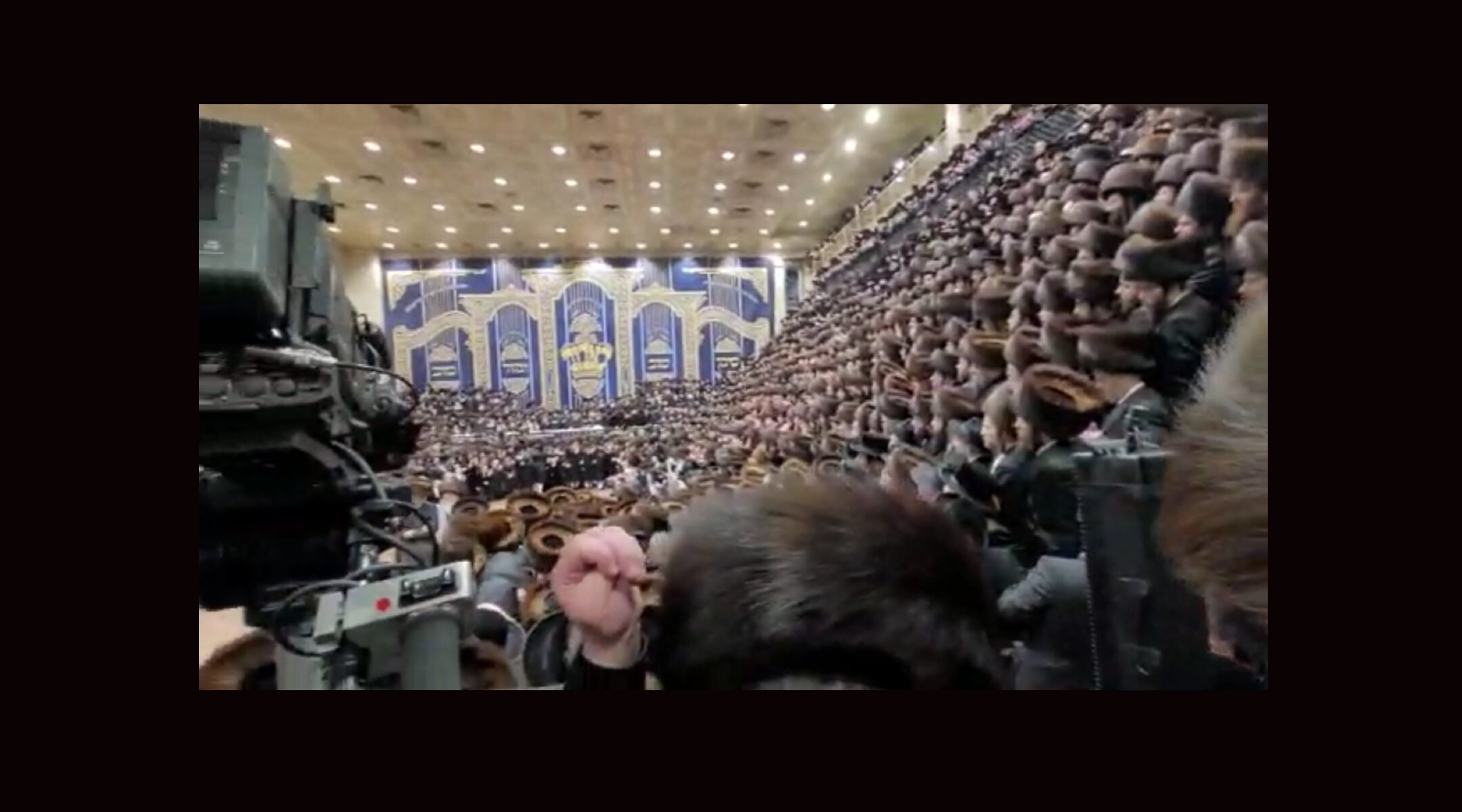 Thousands gathered for the wedding of the son of Rabbi Ben Zion Halberstam, grand rabbi of a faction of the Bobov Hasidic sect. (Screenshot from WhatsApp)
Advertisement

(JTA) — When the Yiddish newspaper Der Blatt set out to explain how a massive wedding for the grandson of the Satmar grand rabbi took place despite pandemic limits on gatherings, it waited until after the event to reveal all the details.

Another Orthodox news site took a different approach this week: JDN, an Israeli site, published an article before a large wedding about the secrecy involved in its planning, then replaced the article with another version that said the affair would be small and in keeping with COVID rules.

Photos and video from the wedding held Monday in Brooklyn’s Borough Park neighborhood made clear that the first version of the story was accurate.

They show that hundreds, if not thousands, of guests packed into the main synagogue of one faction of Bobov Hasidism on Monday night to celebrate the wedding of the youngest son of Rabbi Ben Zion Halberstam, the grand rabbi of the sect. Videos circulated the next day over WhatsApp showed a packed wedding hall with thousands of people and no masks in sight. Large tapestries with the words “mazel tov” were hung from a wall to cover windows into the hall.

The wedding is the latest example of the lack of compliance in Hasidic communities with protocols meant to stop the spread of the coronavirus. And perhaps more troubling for authorities hoping to stop these events, it is yet another example of the degree to which members of the Hasidic community are willing to keep secret violations of public health guidance that put lives in jeopardy as COVID cases rise across the country and a new more contagious variant of the disease continues to spread in the United States and around the world.

JDN, the Israeli news site that revealed the wedding plans on Monday, made clear the extent to which wedding organizers made sure to keep the event under wraps — even though, according to the news site, thousands attended and hundreds came from Europe and Israel to do so.

“Conditions make it very difficult to hold mass events, but the Bobov Hasidic group, one of the largest Hasidic groups in the United States, did everything to make the wedding take place on the better side, properly for the wedding of the youngest son of the grand rabbi for whom many anticipate a bright future,” according to the article published Monday.

“It is a difficult task to organize a mass wedding in such tumultuous days. Even if you have managed to find a respectable venue, the heart is not at peace, because at any given moment you are exposed to the danger of whistleblowing and the police forces will be on their way to the place and the celebration subsides. If in Israel there are concerns, in the United States of America all the more so.”

The article went on to explain that the location of the wedding was not made clear until immediately before its start and that guests were warned not to take any photos or videos of the event.

The original version of the article was documented by Rabbi Natan Slifkin of the Rationalist Judaism blog, who often writes critically about Orthodox leaders and issues in the Orthodox community. But by Tuesday, the JDN article had been replaced with a shorter one that claimed the wedding would be held in a more limited fashion.

“JDN News has learned that due to the situation, the wedding will be held in a very limited manner and notes that the Rebbe is very strict in the instructions and was among the first to order the closure of the Torah institutions of the Hasidim to protect against the virus,” the article said. “Thousands of Bobov followers from all over the world will celebrate from their homes the joy of the great wedding, the joy of the youngest son of the Rebbe who will be married at a good and successful time. The hearts of thousands of followers are full of excitement.”

Since the summer, large weddings have been cited as a source of infection in Orthodox communities and of tension between those communities and government authorities. Community members who have spoken out about the large gatherings at synagogues and wedding halls have been called “mosers,” a term that translates to informers but can carry the threat of physical violence.

In the protests that seized the Hasidic neighborhood of Borough Park in October, one Hasidic journalist was cornered by a mob after a local provocateur, Heshy Tischler, called him a “moser.”

The same JDN reporter who wrote the articles about the wedding tweeted an update Tuesday afternoon after Halberstam spoke at the first of the sheva brachot, the post-wedding celebrations.

“In his remarks, the Rebbe referred to the ‘mosers’ who inform the authorities about celebrations and the opening of synagogues and came out against them with great sharpness,” he wrote.