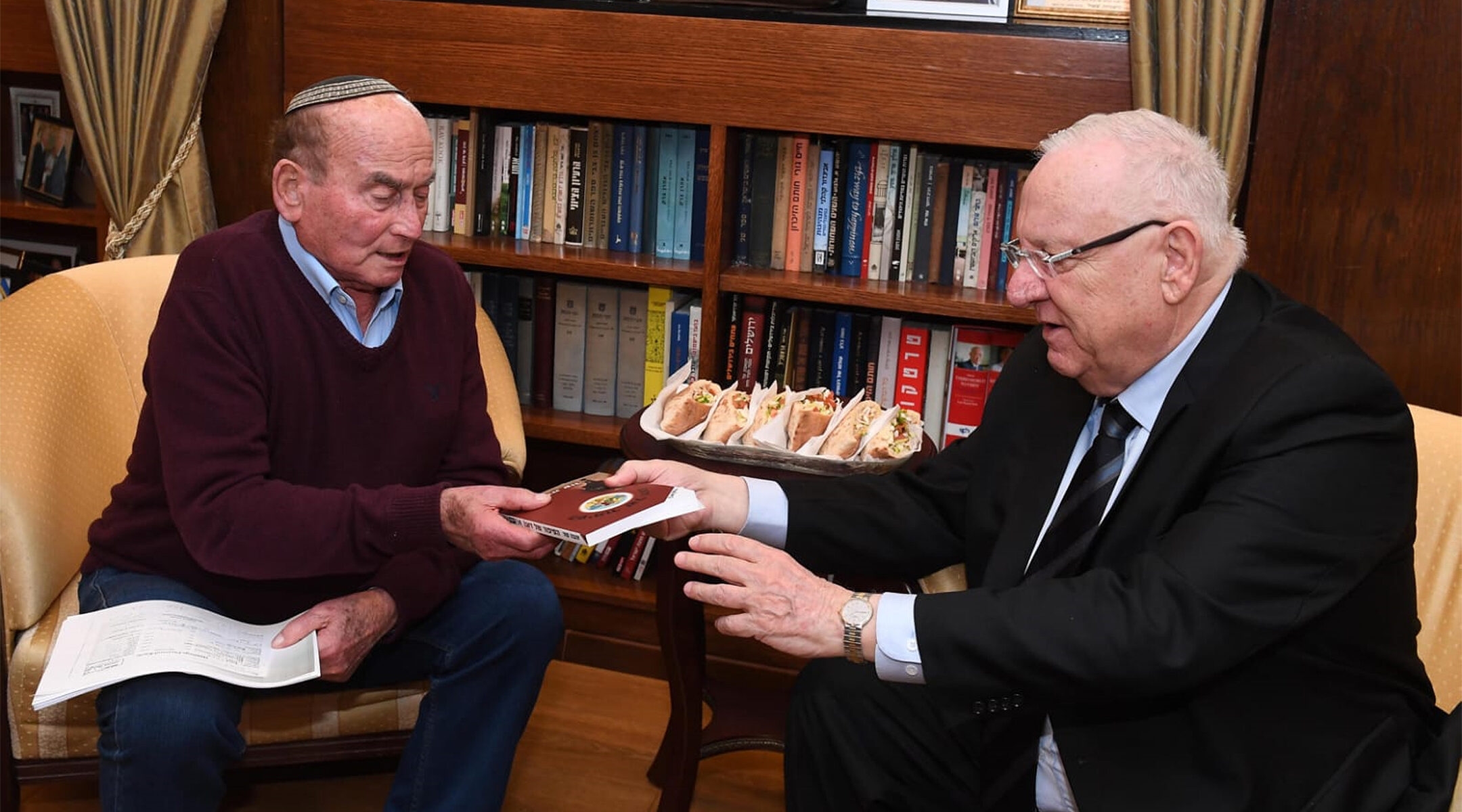 (JTA) — On Jan. 18, 1945, the Nazis at Auschwitz forced David Leitner and about 66,000 other camp prisoners to march through the snow. Underfed, exhausted and wearing nothing but his camp uniform, Leitner, only 14 at the time, began to fantasize about his mother’s bilkalach — small golden buns of bread made in his native Hungary and across Central Europe.

Most of the prisoners died in the death march, but Leitner, known by his nickname Dugo, survived and immigrated to Israel shortly after the Holocaust.

During his first visit to the Mahane Yehuda market in Jerusalem, when he first encountered falafel, memories from that fateful time came back to him.

“The fried balls immediately took me back to the march — and my mother’s kitchen — and I had two portions one after another,” Leitner, now 89, told the Srugim website in 2018.

Since then, Leitner has made it a tradition to eat two falafel portions each Jan. 18 to celebrate his survival. In recent years, his story has become well-known in Israel, where thousands honor Leitner — and the chickpea-based dish that many of his countrymen consider to be quintessentially Israeli — by having at least one portion of falafel on what they call Dugo Day.

This year, Israel’s Foreign Ministry took Dugo Day abroad for the first time, as the embassies in London and Warsaw offered locals free falafel and a chance to learn about Leitner’s story.

In Warsaw, the Israeli Embassy teamed with the BeKef Israeli restaurant, where 350 portions were given free to patrons who posed with a sign reading “#OperationDugo” (in Polish). The action generated interest from Polish television crews and other media, and even a shout-out from the celebrity dancer Michal Pirog. In London, the Israeli Embassy donated 100 falafel portions to a homeless shelter.

In Israel, thousands of people, including former education minister Rafi Peretz, shared pictures of themselves on social media enjoying falafel with the #OperationDugo hashtag (in Hebrew).

“Every year on January 18th, Holocaust survivor David “Dugo” Leitner invites everyone to eat falafel with him…” https://t.co/8jpRSUto3e #OperationDugo pic.twitter.com/AsXQPgVzix

Early on, the falafel ritual was a private affair for Leitner. He never encouraged his wife or two daughters to join him, one of his daughters told Srugim.

“All those years, dad always went alone to have falafel to mark the day,” Zehava Kor said. “We knew Jan. 18 meant a lot to him and he needed to be alone and have falafel and get in touch with himself.”

That began to change as Leitner aged — his great-grandchildren began joining him in recent years. From there, word of the ritual reached the Testimony House, a small Holocaust education institution in Nir Galim, a moshav, or cooperative village, near Ashdod whose founders include Leitner and his wife, Sarah. The institution shared Leitner’s story on social media in 2016, making it so famous that in 2019, President Reuven Rivlin invited Leitner to the residence to have falafel with him.

Leitner wasn’t sure initially that he liked the fame, his daughter said.

“He felt he was putting a lot of people out, he was embarrassed by the whole thing,” Kor said.

Leitner loosened up, however, as he saw how Israelis embraced the custom — dozens would join him on Jan. 18 at the falafel eatery in Nir Galim. In 2018, he posed at the falafel stand with a sign reading “The People of Israel is[sic] alive and well, happy and loving falafel.”

An energetic man with an enduring sense of humor, Leitner encouraged students whom he joined on educational trips to death camps in Poland not to be afraid to laugh while on the trip.

“I tell them, we didn’t come here to cry. Without humor, I would have never made it,” he told Srugim. “I mean, I’m already an orphan. Do I need to be sad one, as well?”

But Leitner’s testimonies about his survival at Auschwitz give an idea of the horrors he endured there. With 20 other boys, he was assigned to clean latrines across several camps that made up the Auschwitz-Birkenau complex.

“When we’d leave our camp in the morning, the famous Birkenau band would play. And each morning we found several people, only Jews, hung at the exit. Sometimes three Jews on one hook,” he said in one testimony for the Moreshet commemoration group.

Eventually Leitner was selected for the gas chambers.

“They grabbed me and put me on a transport bound for the crematorium. Escape was impossible,” he recalled. “They tied me up. I was wild with fear, they locked me up in a shack.”

In 1944, on the Jewish holiday of Simchat Torah, Leitner said he was taken with hundreds of other children to the crematorium.

“We cried Shema Israel all the way, crying for mother, father,” he said.

At some point, the children were stripped naked in what they thought was preparation for their murder in gas chambers. But they were allowed to put on their clothes and live another day, until the death marches began when the Red Army approached Auschwitz.

In his testimonies, Leitner often speaks about feeling hungry.

“Ten people got a pot with soup, we each were allowed one gulp. Sometimes the one waiting in line would grab the pot from the previous person mid-slurp,” he said. “But when I was holding the pot, no force was strong enough to take it away from me. I slurped until I nearly choked.

“But I survived. I’m here, I’m alive and I’m telling the story.”