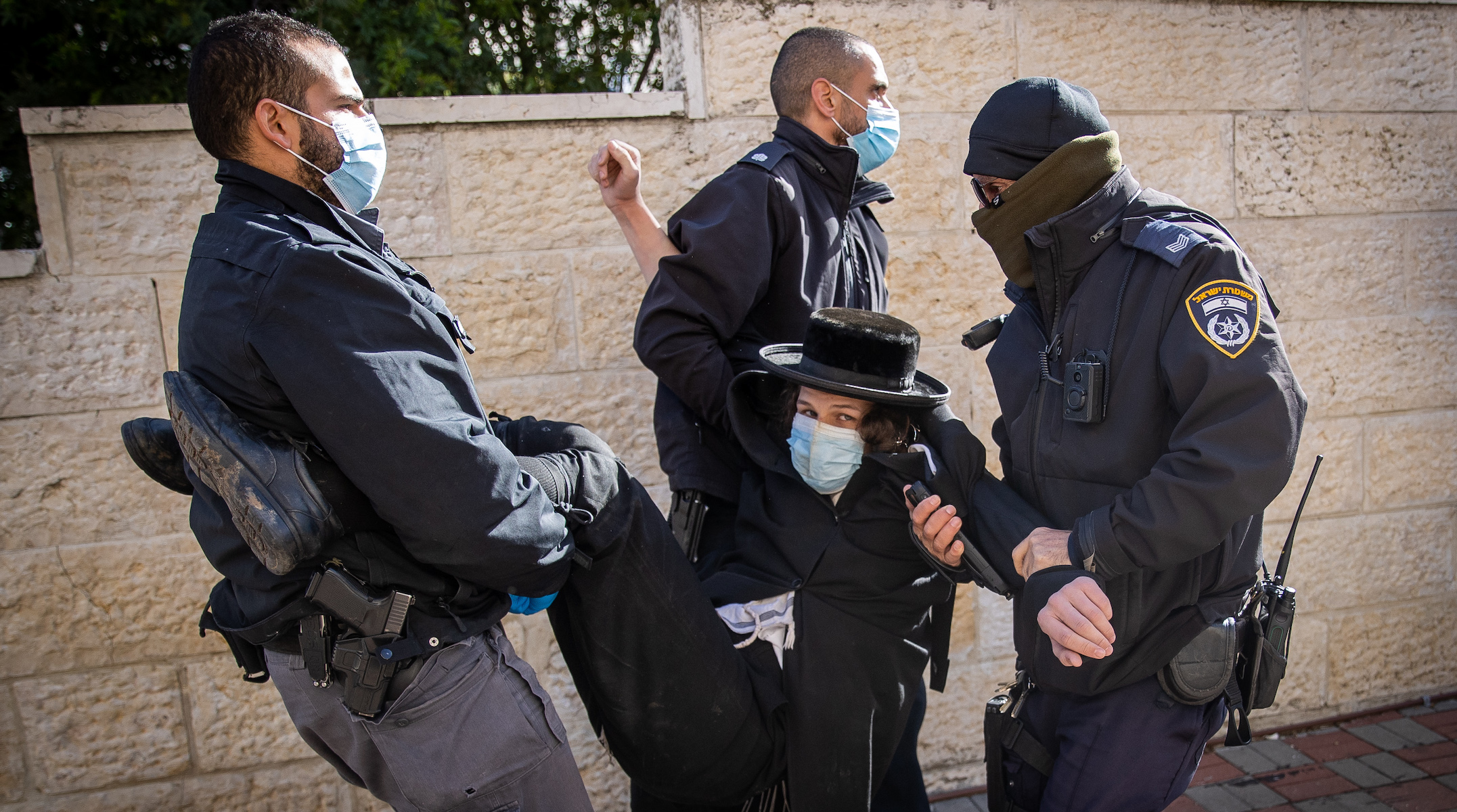 Police officers carry away a protester during a raid on a Jerusalem yeshiva that remained open in violation of COVID-19 restrictions, Jan. 19, 2021. (Yonatan Sindel/Flash90)
Advertisement

JERUSALEM (JTA) — Seven Israeli police officers were injured in clashes with Orthodox protesters over COVID-19 restrictions, the latest in a series of violent conflicts with law enforcement in Israel’s Orthodox communities.

Following the unrest Thursday night, Prime Minister Benjamin Netanyahu called for a crackdown on violations of the country’s COVID-19 lockdown. Netanyahu’s opponents have criticized him for what they call lax enforcement of the restrictions in the haredi, or ultra-Orthodox, communities.

“We will act with a heavy hand against the violators of the law, first and foremost against those who raised their hands against our policewomen and policemen,” Netanyahu tweeted late Thursday evening.

The conflict Thursday in the largely haredi city of Bnei Brak began when an officer was injured by a mob of haredim attacking her patrol car. The attackers shattered the car’s windows with rocks while repeatedly screaming “Nazi” at the officer and her partner. Police then entered a nearby yeshiva, reportedly hurling stun grenades while breaching the building.

The police raid sparked further clashes, with residents erecting barricades and setting fires in an escalating wave of violence during which the sounds of explosions repeatedly echoed across the city and officers were filmed striking demonstrators with clubs.

Six demonstrators were arrested in connection with the clashes.

Haredi communities across Israel have resisted shutting down their institutions in compliance with the country’s repeated lockdowns and have suffered much higher death rates from the virus compared to the rest of the country.

In cities with large haredi populations like Beit Shemesh and the West Bank settlement of Beitar Illit, synagogues have continued to hold indoor prayer services despite the ban and hundreds of people have been filmed attending illegal mass gatherings. Haredi politicians have long complained that police and the media have discriminated against their communities during the pandemic and pay them disproportionate attention.

But data obtained by Be Free Israel, a nonprofit that promotes separation of religion and state, shows that residents of haredi cities are significantly less likely to be fined for defying coronavirus regulations, even though the cities have experienced some of the country’s worst outbreaks.

Earlier this month, Haaretz reported that the police did not plan on enforcing lockdown restrictions in haredi schools, some of which have remained open in violation of government regulations.

Police deny that they are declining to enforce the restrictions in haredi areas. In a statement Friday following the violence in Bnei Brak, Israel’s police commissioner, Yaakov Shabtai, said in a statement that violations “will be addressed with a heavy hand and determination in every place and every sector, with an emphasis on equal enforcement.”

On Wednesday, a protester in Jerusalem injured a police officer with a rock while the officer was trying to shut down an illegally operating yeshiva. A week earlier, three officers were injured while attempting to shut down another yeshiva in the coastal city of Ashdod. The following day, a volunteer policeman fired into the air while facing down a mob protesting the closure of a yeshiva in Beit Shemesh. There have also been clashes and arrests in the haredi Jerusalem neighborhood of Mea Shearim.

A number of Israeli journalists have been physically assaulted while covering the ultra-Orthodox community’s response to the pandemic.

“The violence police are experiencing in various enforcement actions in recent days is worthy of every condemnation and has created images that we cannot accept or reconcile ourselves with,” Shabtai said. “Unfortunately, this is not the first time this week that police enforcing coronavirus regulations have been attacked, and the phenomenon is only getting more severe.״