This NYC ice cream parlor is famous for wild flavors. It’s surviving the pandemic by catering to Jewish customers. 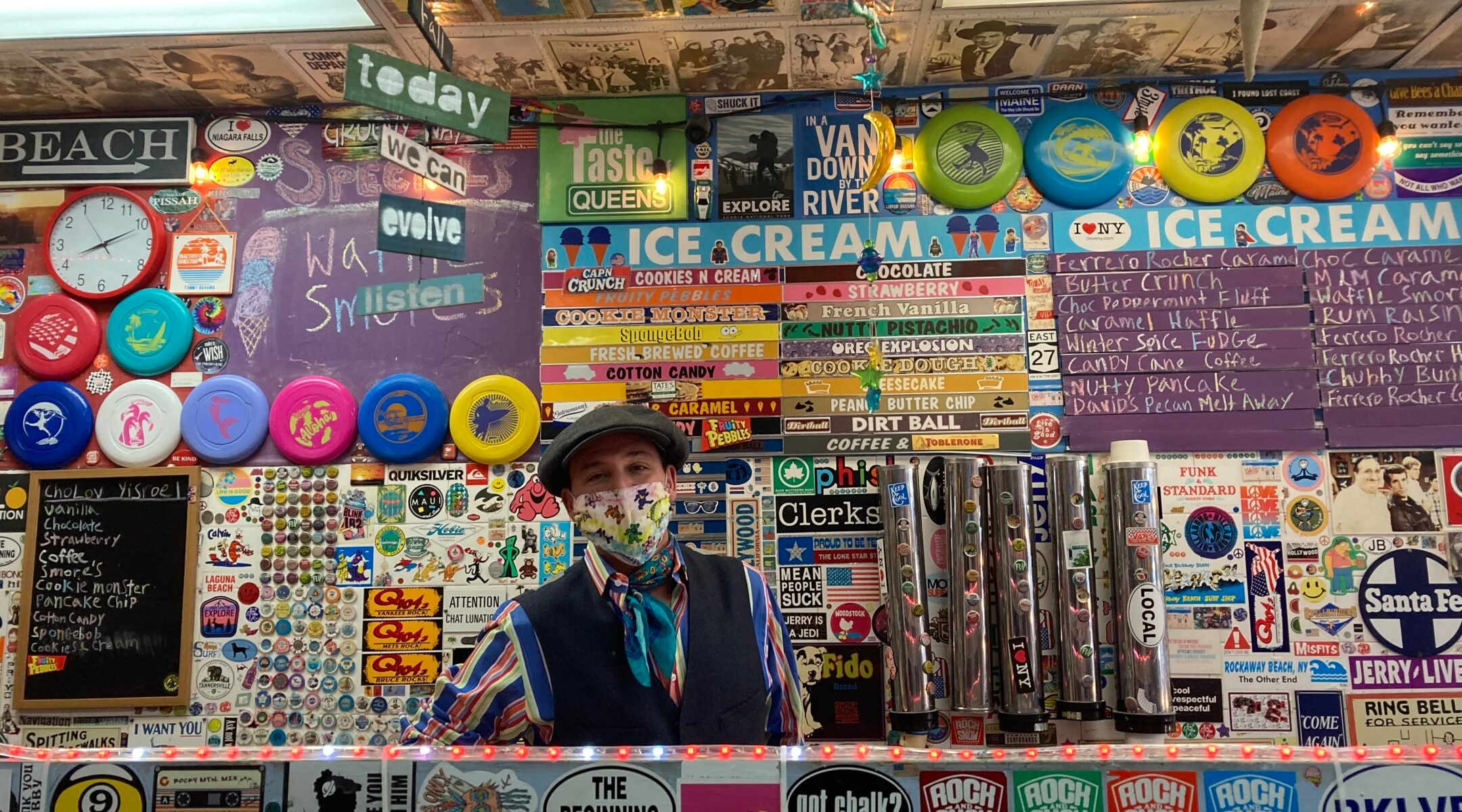 Bruce Becker behind the counter at Max and Mina's. (Shira Feder)
Advertisement

Max and Mina’s flavors tend to change with the seasons, the Jewish holidays and the Becker brothers’ moods. Winter doesn’t stop the experimentation.

“I’m using all of it, even the peel,” Mark Becker said firmly, swinging the bag over his shoulder and vanishing into the back of the Queens store.

Since 1997, Max and Mina’s has become famous for its creative flavors — some of them inspired by savory Jewish cuisine, all of them kosher. There’s been lox, halva, haroset, herring, Ferrero Rocher babka and Chubby Bunny (which comes with bits of birthday cake, sprinkles and dark chocolate fudge swirl), as well as an assortment of cookie-based ice creams.

The store has been featured on world class ice cream lists and declared by the Travel Channel to be one of America’s “most famous ice cream paradises,” with a caveat that some flavors, like pizza, are too bizarre for the masses. American designer Isaac Mizrahi is a fan, as is actor Kevin James.

Max and Mina’s is even the answer to a question in the board game Trivial Pursuit: “What kosher product is served in flavors like ‘lox,’ ‘corn on the cob’ and horseradish at Max and Mina’s in Flushing, New York?”

Even with all the cachet, the store has been unable to avoid the economic hardships brought on by the coronavirus pandemic. Due to the COVID-19 crisis, the Beckers, who grew up Orthodox on Long Island, lost their wholesale business, which was their big moneymaker. The staff has been whittled down to the brothers and their children, who pick up occasional shifts behind the counter.

“The store before COVID was on a rockin’ tear,” a pensive Bruce Becker told the Jewish Telegraphic Agency. “I wonder if COVID wasn’t around what it would be like.” He sighed. “It is what it is.” 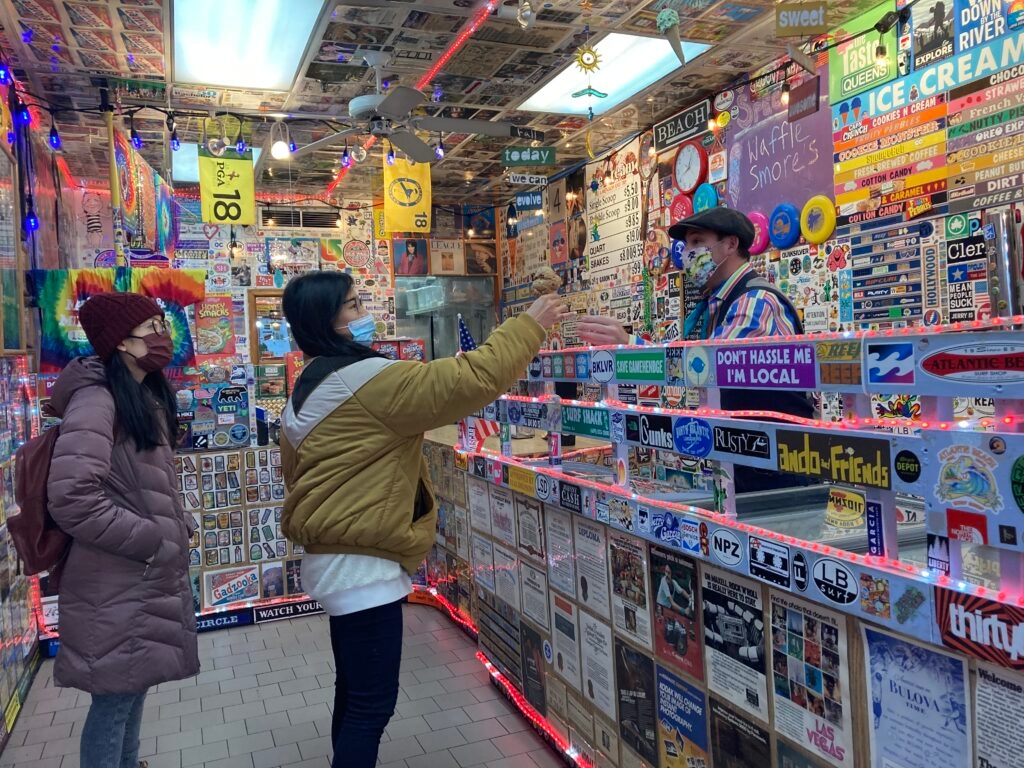 The store is wallpapered with cereal boxes, concert stubs, photos of the Beckers with Francis Ford Coppola, gum wrappers, a photo of the Lubavitcher rebbe, hotel keys and punk band stickers, existing as a sort of interruption to the senses. A picture of flowers, handpicked by Bruce Becker, is glued to the ceiling above the cash register.

Becker describes the store in reverent terms and often compares it to a museum. He says he will never run out of wall space to display odds and ends.

“It’s just about taking your stuff and rearranging,” he said. “That’s what museums do all the time when they bring a new exhibit in.”

The shop is named after the Beckers’ grandfather Max Sockloff, an organic chemist who liked experimenting with ice cream, and their grandmother Mina. After Sockloff died, Bruce Becker discovered what is now a prized family heirloom that exists in a safety deposit box: a book of ice cream recipes documenting his grandfather’s flavor experiments.

Now, 23 years after the store’s opening, the Beckers are trying to keep the dream alive and cooking up several schemes to bring in new revenue streams during the pandemic.

They are considering a dairy-free line of ice cream and have just started accepting credit cards. They also recently added a slate of flavors deemed “cholov yisroel.” Some haredi Orthodox Jews will eat only cholov yisroel — referring to dairy products produced by Jewish farmers. The less stringent will partake of any dairy product certified as kosher.

The business is keeping afloat. The store’s famed past attracts a fair share of non-Jewish foodies, but the cholov yisroel certification has brought in a steady stream of new customers from the Five Towns, a heavily Orthodox area of Long Island, and parts of Brooklyn.

Before Mark Becker walked in with the oranges, a masked Orthodox woman wearing a gently curled wig came in pushing a stroller.

“Almost every day I get someone coming back in here to pay me back for something,” he said.

Asked about how important Jewish identity is to Max and Mina’s existence, Bruce paused to think.

“For me, being Jewish is a value system, about taking care of people and being empathetic to people who are struggling,” he said.

Referring to the woman to whom he had lent the money, Becker added: “I’m struggling, too, and for me to give out could be somewhat questionable, but you can always find a way to give.” 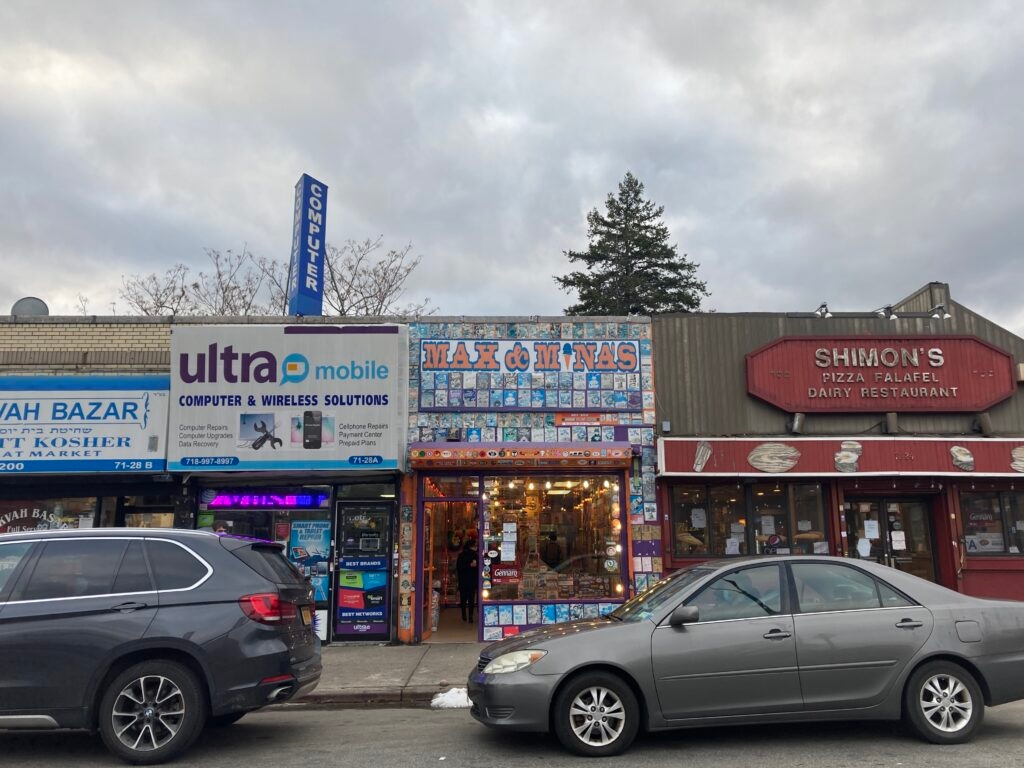 Max and Mina’s is located in Queens, N.Y., in one of the most diverse locations in America. (Shira Feder)

The store, nestled between a kosher pizza joint and a tech repair shop that sells flip phones to a haredi Orthodox crowd, is based in the largely middle class central Queens town of Kew Garden Hills. The area is home to one of the most established Orthodox Jewish communities in New York, and it’s stuffed with kosher eateries, mikvahs and dozens of synagogues. But there’s also a growing Bukharian Jewish population, as well as groups of Afghan, Latino, Korean and Chinese residents, many of whom seem to enjoy their fair share of ice cream.

“It seems like he’s really creative,” said one, Tehilla Limgento, a kosher observer accompanied by her friend Julia Tran. “And I think it’s really fun to go to a place that is kosher that’s pretty stellar.”

Bruce Becker got out from behind the counter to examine the ticket. He’s done with the interview – and back to serving.