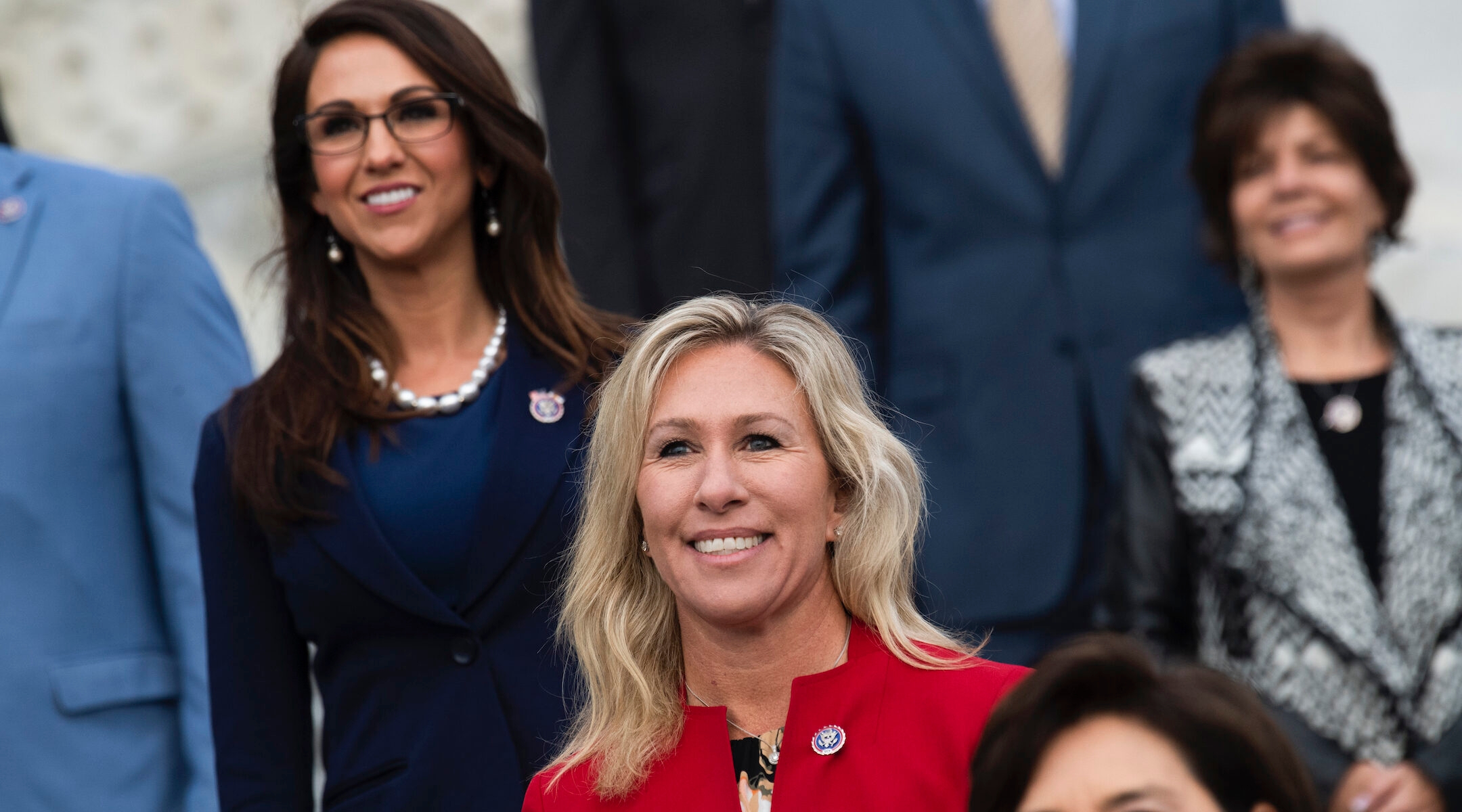 (JTA) — About a year after the Pittsburgh synagogue shooting, a white supremacist in western Colorado plotted to attack another Jewish congregation.

The FBI arrested the white supremacist in November 2019 and his plans never came to fruition. He pleaded guilty to the charges against him in October.

One month after that guilty plea, the president of the synagogue voted for a congressional candidate whose policies he believed would help protect the local Jewish community: Lauren Boebert, the freshman Republican representative.

Boebert, a restaurant owner and gun-rights enthusiast, has made headlines for the kind words she’s offered about QAnon, the pro-Donald Trump conspiracy theory with anti-Semitic overtones.

But the synagogue leader, Michael Atlas-Acuna, does not believe Boebert is an anti-Semite. He says she’s “spunky,” and he hasn’t read much about her statements on QAnon. Atlas-Acuna feels pro-gun policies will help protect his synagogue from future would-be attackers. His synagogue, Temple Emanuel of Pueblo, has several members who come to services carrying weapons.

“I believe in the right to carry a firearm,” said Atlas-Acuna, who does not personally carry a weapon to synagogue. “And I like the idea that we have members that are responsible, that carry. I pity anybody who ever came through that door because they would be real surprised.

Atlas-Acuna is one of the relatively few Jews who lives in one of the two congressional districts being represented now by those who have praised or affiliated with QAnon in recent years. The other district, in northwest Georgia, is represented by Marjorie Taylor Greene, who has also shared explicitly anti-Semitic and Islamophobic stereotypes on social media, in addition to echoing a range of conspiracy theories.

Greene’s social media posts led to an unprecedented vote in Congress last week to strip her of her committee assignments. Boebert, who has said that she does not personally support QAnon, has not faced the same degree of backlash.

Some Jews in both districts, like Atlas-Acuna, continue to support their congresswomen and said they were more worried about anti-Semitism on the left.

Other Jews in both districts — which are geographically distant and quite different from one another — told the Jewish Telegraphic Agency that the two lawmakers scare them. According to a 2014 study, Greene’s district has only a couple hundred Jews, while Boebert’s has some 2,000.

Jews in the districts said that they did not feel like they live in anti-Semitic areas and doubted that anti-Semitism drove their neighbors to vote for Greene or Boebert. Rather some feared that Boebert and Greene signify a broader threat that exists across the country.

“She just has hateful rhetoric,” said Shelly Peller of Rome, which sits in Greene’s district. “She is propagating a false narrative. And she’s dangerous. It’s particularly hurtful that there are anti-Semitic comments. But I can’t say that those were the worst comments that she made.”

Temple Emanuel in Pueblo, Colo., was targeted in a bombing plot by a white supremacist whose plans never came to fruition. (Screenshot from Google Maps Street View)

Peller believes that Greene won the general election simply because she’s a Republican. Her district, in Georgia’s northwest corner, hasn’t been represented by a Democrat for decades. So Greene’s string of posts questioning a school shooting or the veracity of 9/11, or endorsing calls for Democratic officials to be murdered, did not prevent her from victory in November, when she ran unopposed after her Democratic opponent dropped out.

In a recent speech on the House floor, Greene said that she no longer supports QAnon, that “school shootings are absolutely real” and that “9/11 absolutely happened.”

“It’s not that we feel that we live in a hate-filled, anti-Semitic district,” Peller said. “People are going to vote on single issues, whether it’s gun rights, whether it’s abortion.”

Following reports of a post that Greene wrote in 2018 blaming California wildfires on lasers from space controlled in part by the Rothschild family, Peller’s synagogue, the Reform Rodeph Sholom Congregation in Rome, put out a statement condemning anti-Semitism by elected officials. The statement did not name Greene specifically, so that it could apply to bigoted rhetoric more broadly. It’s the only synagogue in Greene’s district.

“It is especially heinous when any elected official singles out a specific group and engages in false narratives regarding them,” the statement said.

Beyond that, members of Rodeph Sholom don’t plan to speak out as a community. Some worry that extended coverage of Greene’s statements will end up bolstering her profile and influence.

“All of the negative publicity that she’s getting, she’s using it, she’s milking it,” said Anne Lewinson, who also lives in Greene’s district and is a member of Rodeph Sholom. “She can play into the narrative of, oh, the poor, oppressed, conservative, [saying,] oh, look at how people, how the media is picking on her. And she’s milking it as a way to get more money, to get tons of support.”

Jewish residents of Greene’s district also believe it is a mistake to focus on her specifically, as opposed to the broader national constituency to which she belongs. Millions of Americans support QAnon, while substantial minorities have embraced other conspiracy theories.

“For me it is distressing, it’s anxiety provoking and it’s actually scary because I don’t think that she is a single entity,” said Peller’s husband, Jeff. “I think that there’s good reason to believe that there’s some additional number of people out there who share these feelings. And for what it’s worth, when a person espouses some conspiracy theory, they’re not making it up themselves.”

The Pellers are now asking themselves if residents of their district have been drawn in by QAnon and anti-Semitic conspiracies, though they said there were many kind people there who believe in inclusion and multiculturalism. Shelly Peller said that in the wake of reports on Greene, Christian friends have reached out to see how she’s doing.

But Rodeph Sholom has been attacked by anti-Semites before, and in recent years a white supremacist group posted anti-Semitic flyers on the building. Synagogue leaders were reluctant to share a photo of the building for this article because they did not want to expose its address and identifying features to hate groups.

“When we live our lives here on a day-by-day basis, we have not been experiencing any hateful, negative experiences” Jeff Peller said, adding however that the support Greene has garnered “makes us wonder.”

“But we don’t have any proof of what people are feeling. And it is very peculiar,” he said.

Rabbi Emily Segal of the Aspen Jewish Congregation, in Boebert’s district, is similarly unsure how much Boebert’s voters know about or identify with her QAnon comments.

Boebert won comfortably in November in a district that has been represented in the House of Representatives by a Republican for more than a decade. Segal said some of her members are particularly concerned that Boebert doesn’t support public health policies designed to reduce COVID-19 cases.

Western Colorado is more diverse politically than northwest Georgia. Most of the Aspen synagogue’s members grew up outside of the region, and about one-third or one-half live in the ski town seasonally. Segal said the same is true of other resort areas that dot the region, though she noted that people who actually work in the service industries tied to the resorts tend to have lower incomes and live there full-time.

But as in Greene’s district, Boebert’s Jewish constituents said that anti-Semitism is far less common than unfamiliarity with Jews and Jewish practice.

“Most of the people in this area have never met a Jew,” said Lesley, a local Jew who declined to give her last name because she was concerned for her privacy. “They know nothing about Judaism, so when they do meet you, they don’t know what to say. There’s not any overt anti-Semitism in this area.”

Atlas-Acuna also feels comfortable as a Jew in the district, and said he’s “not concerned at all about Lauren Boebert.” Instead, like most Republican Jews, he’s worried about anti-Semitism on the other side of the political spectrum. He mentioned two advocates of boycotting Israel, Reps. Ilhan Omar and Rashida Tlaib, as well as Alexandria Ocasio-Cortez, the New York congresswoman who is their ideological ally but has not advocated an Israel boycott.

“I’m more concerned about the left-wing piece of the Democratic Party, the anti-Semites that we have in Congress today on the left side,” Atlas-Acuna said. “[Ilhan] Omar, AOC and [Rashida Tlaib] to me are the problem, not somebody who carries a gun.”

Ira Levy, who lives in northwest Georgia, feels the same way. He wouldn’t say who he voted for, but believes Greene should be given a chance now that she’s in Congress and should not be disqualified by statements made years ago. He also thinks people need to pay more attention to anti-Semitism on the left.

“She apologized for what she said, it’s in the past and she’s looking to make a new start,” Levy said, adding that he doesn’t believe in “singling her out when there’s plenty of other people that have said a lot worse things than what she said.”

Lewinson, who said Greene is “supporting wackadoodle ideas” and is “horrific,” said she isn’t sure whether Greene recognized that the conspiracy theories she was amplifying were anti-Semitic.

“I think we probably have no real information on what she actually thinks about Jewish people,” she said.

Likewise, Lewinson assumes that some portion of her district believes in conspiracy theories about George Soros and the Rothschild family, but might not know that they’re echoing age-old anti-Jewish rhetoric.

“I think it’s something where you have to actually have a way to sit down with them and explain to them here’s why what you’re saying is actually perpetuating negative attitudes and negative ideas about Jewish people,” Lewinson said. “They would not particularly realize or put together the fact that when you start talking about financiers and throw in Jewish names, that what you’re doing is anti-Semitic.”

Jewish leaders in both districts have not reached out to their new representatives on behalf of their communities, according to Segal and Nancy Brant, the president of Rodeph Sholom. Brant said she’s not interested in meeting Greene because “I don’t believe anything she says.”

“Even if we were to reach out to her, what we would get is something she would be coached into saying,” said Brant, who does not live in the district and said she was speaking in a personal capacity. “I don’t think any of us in the temple have any desire to engage with her in any capacity.”

But Shelly Peller is worried that Greene is the vanguard of a conspiratorial and bigoted movement that will only grow. The highest priority, she said, should be defeating Greene in 2022. But she’s under no illusion that Greene is alone.

“She was one of two voted in on this round,” Peller said, referring to Greene and Boebert. “But what’s going to happen the next round? Is this a movement that we’re going to see in our country? And that’s the scary part.”