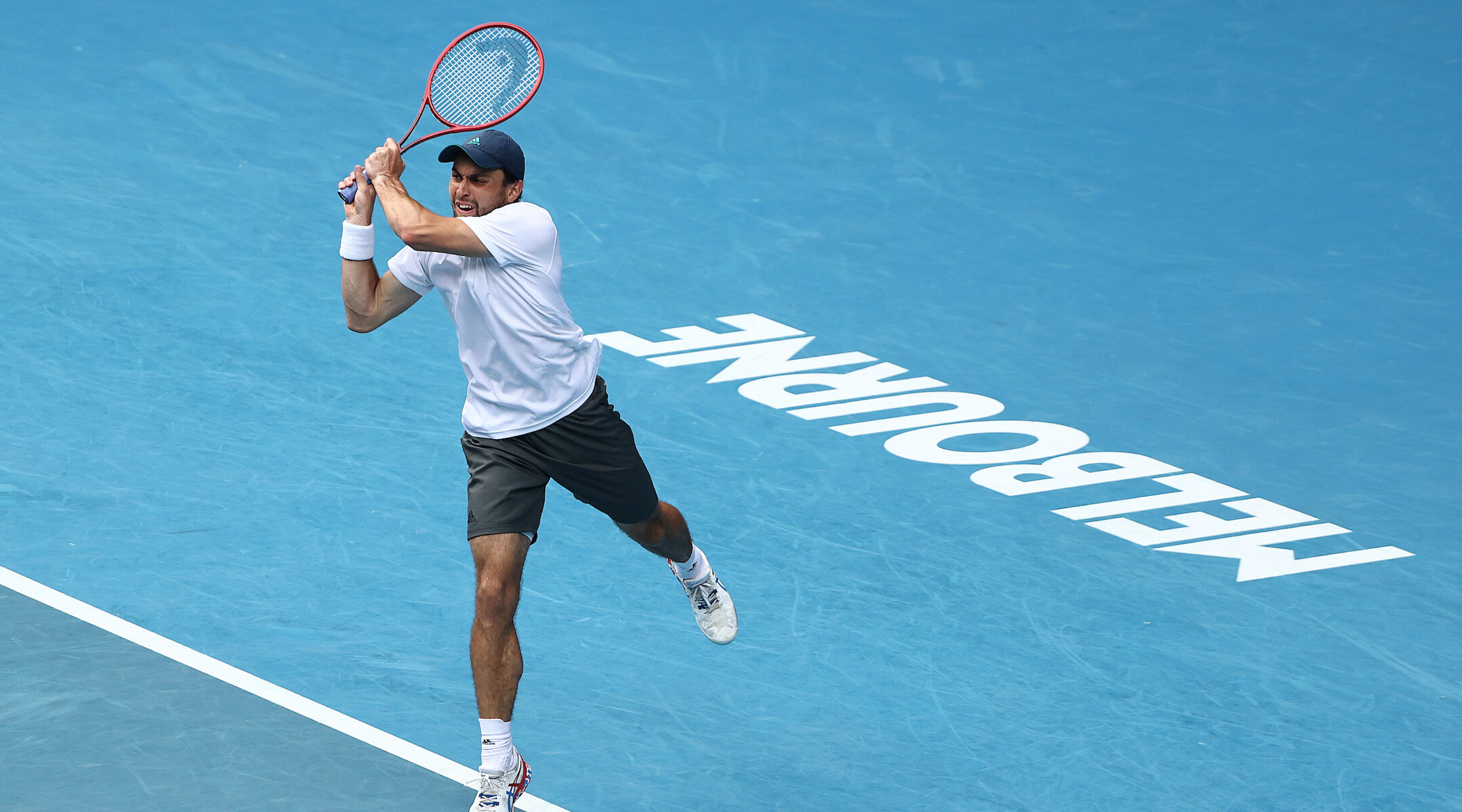 Aslan Karatsev shown in his match against Grigor Dimitrov at the Australian Open in Melbourne, Feb. 16, 2021. (Cameron Spencer/Getty Images)
Advertisement

(JTA) — Aslan Karatsev, a Russian tennis player with Jewish heritage who lived in Israel for nearly a decade, is making history at the Australian Open.

It’s his first appearance in a Grand Slam tournament, and he had to play well in the preceding qualifying tournament just to make the draw. Now Karatsev, who was ranked 253th in the world after play resumed last year following a pandemic break, is in the semifinals.

He’s only the second qualifier in history to make it to the Australian Open semifinals, the fifth qualifier to reach a Grand Slam semifinal in the so-called Open Era (beginning in 1968) and the first male player to reach the semifinals in his Grand Slam debut.

Along the way, the 27-year-old upset the Argentine-Jewish standout Diego Schwartzman, who is ranked in the top 10, in the third round; top 20 Canadian youngster Felix Auger Aliassime in the fourth; and veteran Grigor Dimitrov in the quarterfinals.

Next up is Novak Djokovic, the No. 1 seed and defending champion, in the semis.

Karatsev has soared to 114th in the rankings and no matter the result against Djokovic, he will break the top 50. (If he wins, he’ll make the top 30.)

“It’s an unbelievable feeling,” Karatsev said after his latest win.

Aslan Karatsev
➡️Ranked #253 after the pandemic break
➡️#114 now
➡️Qualified in Doha
➡1st *ever* player to reach the SFs on his Grand Slam debut
➡️5th ever qualifier to reach a Slam SF.
➡️ Will rise to inside the top 50 next Monday.

One of the best stories in recent years pic.twitter.com/WzJ63tHCmp

Karatsev was born in the North Caucasus region of Russia. His maternal grandfather is Jewish.

“I moved to Israel when I was 3 years old with my family, and then I started to practice in Yafo, Tel Aviv-Yafo,” he said at a recent news conference. “I grew up there, practicing there until 12 years old, and then I moved back to Russia with my father.”

Karatsev said the Israel Tennis Association’s lack of funding was a major factor pushing him to leave. His mother and sister remained in Israel.

He moved to Rostov, Russia, for better training, then Moscow. From there it was on to Halle, Germany, and Barcelona, Spain, before finally ending up in Minsk, Belarus, where he lives today. Karatsev still has an Israeli passport and speaks fluent Hebrew.

The Australian Jewish news reported that in September, Amir Weintraub, an Israeli tennis player, and Avi Peretz, chair of the Israel Tennis Association, tried to convince Karatsev to play internationally for Israel. But Karatsev had already signed on to compete with Russia in the Davis Cup tournament, which pits teams of players representing different countries against each other, Olympics style.

The gap between the semifinalists could not be wider. Djokovic, one of the top players in tennis history, has eight Australian Open titles — Karatsev has eight career ATP wins.

(Ranked 114th in the world, Karatsev becomes the lowest-ranked man in the semifinals since Goran Ivanisevic was 125th at Wimbledon in 2001. Coincidentally, Ivanisevic now coaches Djokovic.)

“I’m trying to enjoy the moment, not thinking about it too much, just playing from round to round,” Karatsev said Tuesday.