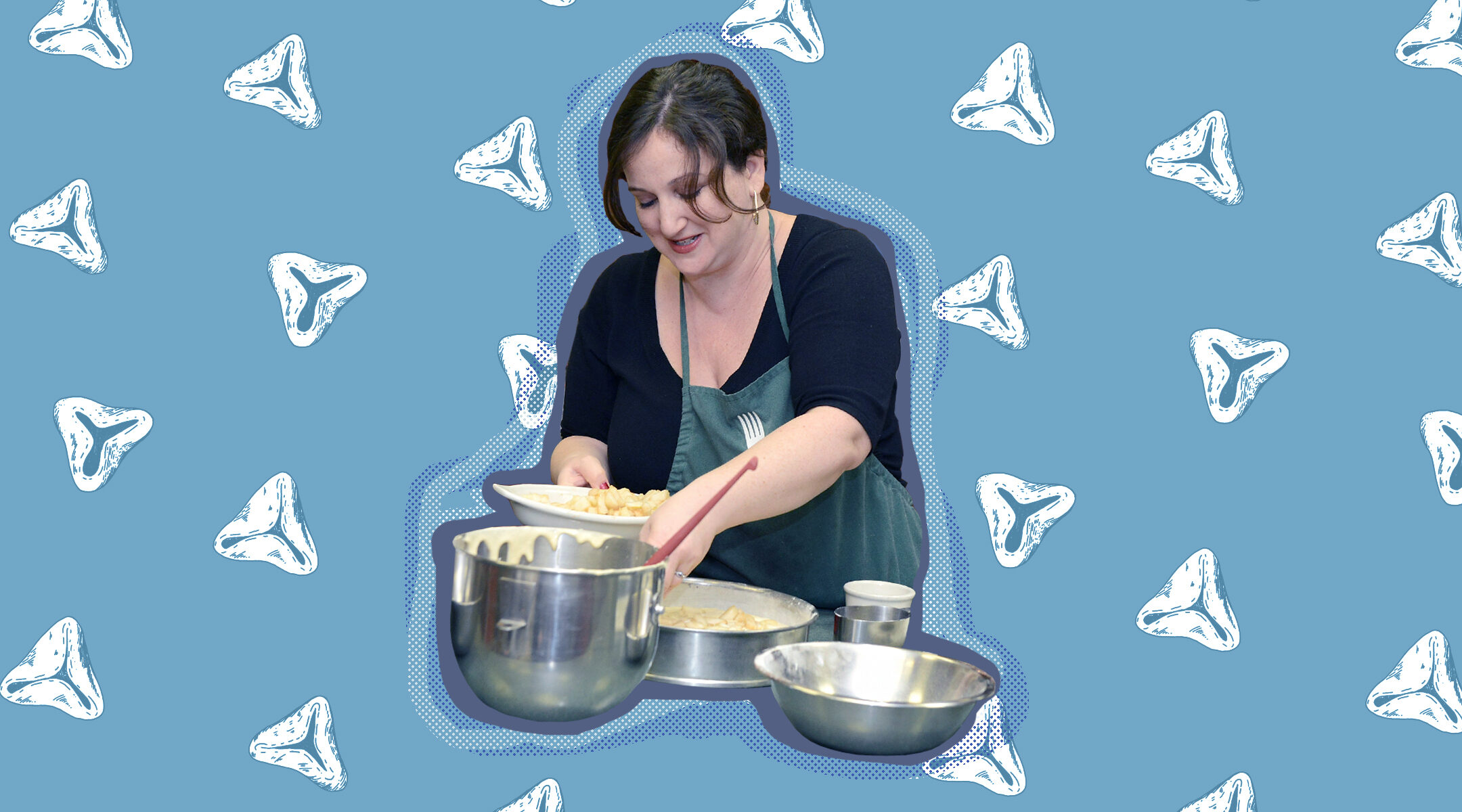 (JTA) — Deb Perelman has a complicated relationship with her hamantaschen.

With some recipes, the edges won’t stay pinched, leaving the cookies flopping open with filling spilling from all sides. The doughs that do stay pinched, like the ones at most bakeries, usually aren’t buttery and flaky. And the fillings are often too bland, not quite meeting the standard Perelman has set for her 15-year-old food blog, Smitten Kitchen.

“In general, the ones I’ve gotten from bakeries are not what I want them to be,” Perelman told the Jewish Telegraphic Agency. “And I’ve struggled with this idea of is this what hamantaschen are supposed to be and I just don’t like them? Or can they be better?”

At Smitten Kitchen, the answer is always to make them better — while still honoring how they always have been.

Perelman is one of the most well-established and beloved food bloggers in America and Smitten Kitchen, which has also launched two cookbooks, is known for painstakingly well-tested recipes. The recipes, including the Jewish ones, need to work not just technically but for a broad audience that includes people who have never heard of hamantaschen or other classic Jewish foods. (Perelman once had to explain matzah to a confused reader from Idaho in the comments section of her matzah ball soup recipe.)

Sometimes, as in the case of hamantaschen, that means showing respect for what traditionally has been while making changes to serve her tastes and those of her readers. That’s why, 15 years and three hamantaschen recipes into blogging, Perelman recently unveiled yet another recipe for the triangular cookies.

Adapting traditional recipes to suit modern tastes is something Perelman has some practice doing. Smitten Kitchen isn’t just known for great recipes — it’s especially known for well-honed adaptations of recipes that started out somewhere else, whether in a cookbook or on the internet, or from Perelman’s mother, another blogger or a friend. Sometimes Perelman’s version makes the dish easier to execute with limited accessibility to specialized ingredients or helping you adapt the recipe to the realities of a tiny kitchen. (She lives in a Manhattan apartment, so she understands.) And sometimes she’s just making it tastier.

Perelman is a stickler for sourcing and tends to err on the side of overwhelming readers with background information on the dish she’s making rather than leaving them wondering.

That habit has been a help over the last year or so as other food writers have been criticized for failing to acknowledge the cultural origins of their recipes, as when Alison Roman came under fire for failing to note the cultural roots of her famous coconut chickpea stew that closely resembled a curry in 2019.

Over the past several months Bon Appetit, the preeminent cool foodie magazine, has undergone its own racial reckoning. Its editor in chief resigned after a photo surfaced of him in brownface, and multiple employees of color alleged discrimination and pay disparities between them and their white colleagues. To address its issues, the magazine launched what it’s calling the Archive Repair Project, an initiative to revise past stories and articles that have dealt insensitively with the ethnic and racial origins of various dishes.

Last week, that project set its sights on hamantaschen following a 2015 article by a non-Jewish writer who described the cookies as dry and crumbly ignited controversy for the magazine. The revised version eliminated the author’s language that disparaged hamantaschen.

“We apologize for the previous version’s flippant tone and stereotypical characterizations of Jewish culture,” editors wrote in a note appended to the top of the article.

The episode this week drew the disdain of New York Times columnist Bret Stephens, who called it “the apotheosis of Woke.” But the person who first flagged the story on Twitter, a Jewish food writer named Abigail Koffler, wrote that while she believed the ideal solution would include a new story, “I’m still glad that the article was updated.”

Perelman has largely remained above the fray in such episodes. She has amended her descriptions of certain dishes following pushback by readers. But Perelman has been quick to correct herself, and her comments sections are among the last cordial spaces on the internet.

She has also made transparent her wrestling with where she fits into contemporary conversations — and where she thinks she doesn’t. Perelman did not post on her blog in the first few days after the George Floyd protests began and explained why when she came back a few days later. 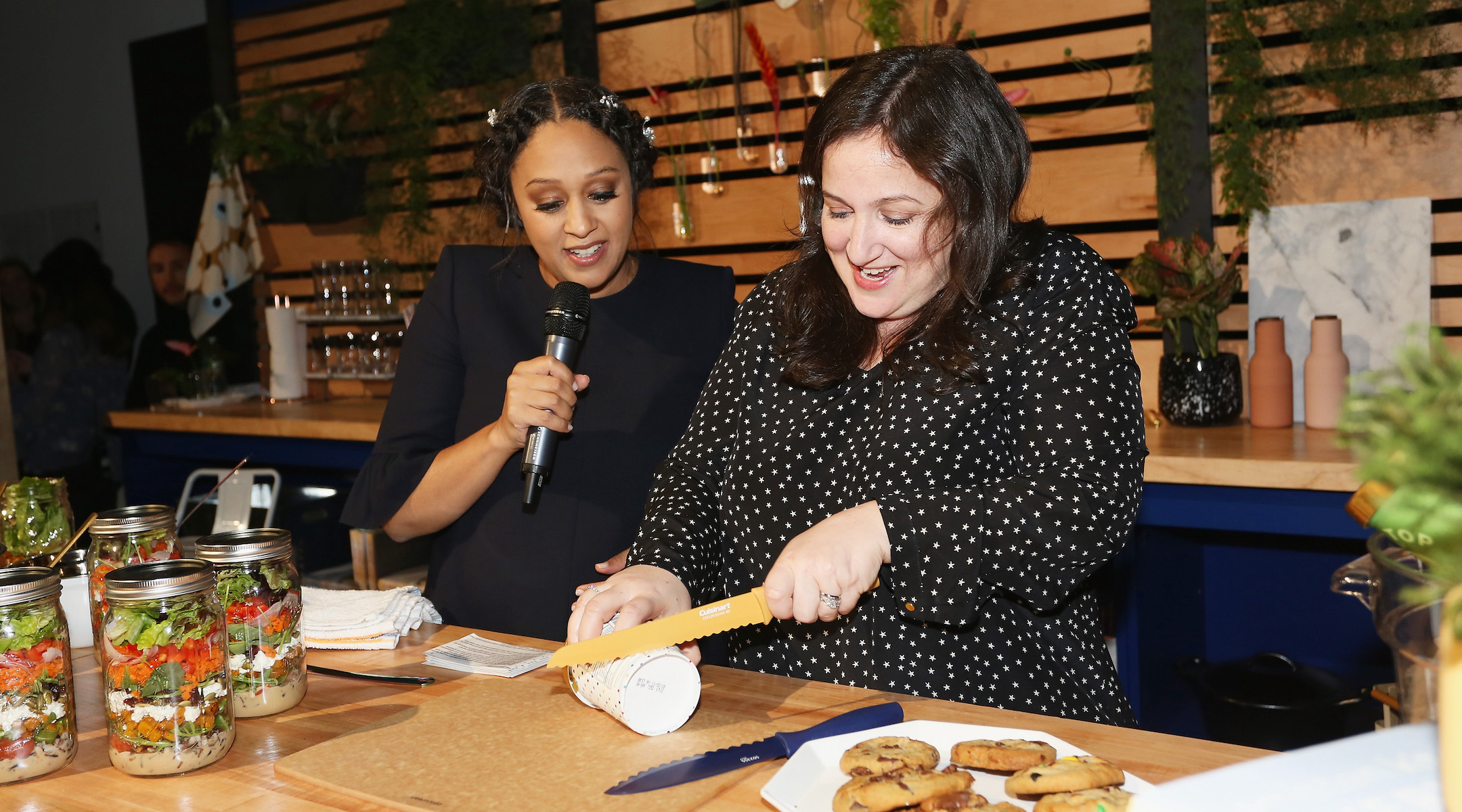 “It would ring hollow to pivot away from what I love the most in June — grilled vegetables, summer salads, icy drinks, and birthday cake — for a detailed look at, say, bail funds only to pivot back two days later because I wanted to make lemon bars,” she wrote. “But it would have been disingenuous to feign interest in berry shortcakes as usual while my head was everywhere else.”

Perelman added a page on her blog with links to cookbooks by Black authors. Her readers, with whom she has built a strong rapport over years of engagement in the comment section and on her Instagram, seemed to appreciate her approach.

“Good use of your privilege, Deb. Thank you,” one commenter wrote.

Perelman believes that food is about conversations between cooks and cultures, and said she doesn’t want to limit who gets to write about food but believes it should be done with respect.

Leah Koenig, a food writer and author of multiple Jewish cookbooks (including “The Jewish Cookbook,” which Perelman said she often uses when working on a Jewish recipe), said Perelman’s habit of sourcing has always set Smitten Kitchen apart from other food blogs.

“I think she’s been really good at it before this was more keenly on people’s radar,” Koenig said. “She found a language to make recipe evolution and creation a conversation instead of taking claim to something.”

Though her blog features testaments to her love of Jewish food, Perelman said she wouldn’t consider herself very religious. Much of her family’s nonculinary connection to Jewish holidays comes through her children’s Hebrew school, though they’ve taken some time off during remote school. (This is a source of guilt for Perelman, she said, suggesting half-jokingly that her son could keep up his Hebrew on Duolingo.) Perelman and her husband are thinking about how to celebrate their son’s bar mitzvah, considering two different kinds of Jewish pilgrimages — a trip to Israel for the family or a big dinner at Sammy’s Roumanian Steakhouse, assuming those things one day become safe again and the restaurant reopens.

Perelman describes her own Jewish upbringing in New Jersey as “a Reform-Conservative blend.”

“Mezuzahs on the door. Bacon fine at diners,” she said.

In one of her hamantaschen posts, she wrote that her mother “made French onion more often than matzah ball soup, beef bourguignon instead of roast chicken, not that we minded one bit.”

But Jewish foods certainly were present, at least at holidays, and one even forms an important part of Perelman’s personal story. In a guest post from 2008, Perelman’s mother explained how she agreed to marry Deb’s father at least in part to get his mother’s noodle kugel recipe. (Perelman herself met her husband, who is Russian and the muse for much of the caviar consumption on the site, through her blog after he commented on one of her blog posts. The two exchanged emails, went on a date and the rest is history.)

When a commenter asked if the noodle kugel, heavy on butter and sugar, was meant to be eaten with the main course or as a dessert, Perelman gave her permission to serve it with dessert.

“The kugel is sweet, like, almost dessert-level sweet. Yet, it is traditionally served with dinner. It is all very confusing,” Perelman wrote.

If not for that maybe main dish, maybe dessert kugel, we might not have Smitten Kitchen.

But which foods on the family table during Perelman’s childhood were actually considered Jewish wasn’t always clear.

“I wasn’t aware of where the seams were. Like is my mother’s apple cake Jewish? I think so because it’s parve. But is it?” she said.

When it comes to the Jewishness of the foods on her site, Perelman acknowledges that the lines can be hard to detect. Egg breads exist in other cultures, she said, so is challah necessarily Jewish? Is her chicken noodle soup Jewish because she is?

Perelman doesn’t feel a need to answer these questions definitively more than she has by placing these recipes in a “Jewish” subcategory on her site. But she takes a similar approach to her Jewish recipes as she does to recipes from other cultures — researching their backgrounds and using proper terms for different dishes while making adjustments to the techniques or ingredients so they are still recognizable but better suited to her tastes.

That philosophy is what made hamantaschen such a struggle for Perelman. While traditional recipes are often made with margarine or oil to keep them parve, or dairy-free, so they can be eaten by kosher keepers after a festive meat meal, Perelman wanted hamantaschen that resembled buttery, flaky tarts with exciting, flavorful fillings.

In 2008, she shared a recipe for a cream cheese-enriched hamantaschen dough, calling the version “one more chapter in my annual attempt to make hamantaschen that suit my fancy.”

In 2011, she tried again, this time going for the more traditional poppyseed filling.

“I can’t seem to find a recipe that allows them to be as fragrant, buttery, delicate and delicious as I believe they were meant to be that does not completely fall apart once baked,” she wrote by way of introduction.

In 2016, she offered a new version with her apricot hazelnut brown butter hamantaschen.

“The recipe below is a good standard hamantaschen dough that can even be made dairy-free should you use olive or another oil instead of butter,” she wrote, nodding to kosher-keeping or otherwise dairy-avoidant readers. She added: “It turns out you can use this recipe to be very traditional or very very not. Basically, we all win.”

This year, though, Perelman seemed to veer avant-garde, posting a marble cheesecake version that in her own words have a bovine appearance. These are not the kind of hamantaschen you can easily adapt to nondairy. Nor does the chocolate and vanilla marbled dough easily lend itself to the traditional filling flavors.

“I realized that my struggle is that I want them to be something that they traditionally are not,” Perelman said.

And for Perelman, that’s perfect.

“Needless to say, these are squarely in the less traditional/dairy camp — I mean, they look like cows,” she wrote. “But they’re also, for me, the last hamantaschen recipe I’ll ever want: rich, delicious, and unfussy enough that you can make them in very little time. I hope you love them too.”